One more high tide of moving cars and watching for flooded roadways will be present Wednesday. Despite the dry, sunny weather, nuisance coastal flooding has been around since Friday and it will be with the region one more time Wednesday.

The coastal flood advisory is in effect Wednesday from noon to 6 p.m

Ocean, Atlantic and Cape May counties are in the advisory. Up to a foot of water inundation above ground level is expected in low lying areas during this time.

Despite northwesterly winds and a quarter moon Wednesday, both of which bring lower tides, post-tropical cyclone Teddy, which will slam into Nova Scotia later in the day, continues to churn up rough seas and push water onto shore. 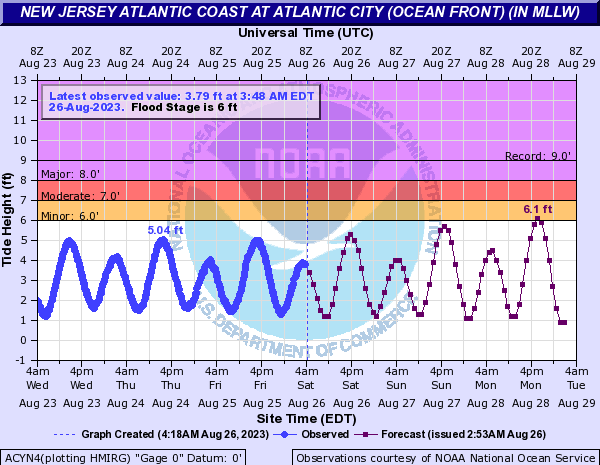 However, Cumberland is not in the advisory. While minor flood stage will be expected, it will be very low end and only impact localized areas.

In South Jersey, Atlantic Ocean high tides are within a half hour of each other. However, back bay and Delaware Bay tides peak one to two hours later.

Find high tide times near you

Why is it flooding when its dry and sunny out?

Here's a list of roads that will likely take on water

Flooding begins along Washington Street, Yacht Avenue and Texas Avenue in Cape May.

Flooding begins at the most susceptible locations in West Atlantic City.

All throughout South Jersey, you can use this tool to find flooding on your street.

Before a storm strikes, you can find out how severe the coastal flooding will be on your block, using Climate Central's Surging Seas Risk Finder (https://riskfinder.climatecentral.org/). Utilize the map below, along with the explainer video at the bottom, to determine the flooding on your street

The Cape May County Flood Mapper tool lists buildings of note, roadway and more, all while showing the extent of the tidal flooding.

A tutorial on how to use the tool is listed below.

The mapper can be viewed right on our website below.

Dangerous water conditions continue to be an issue Wednesday. The National Weather Service has issued a rip currents statement through midnight Thursday.

If caught in a rip current, don't panic and don't fight the rip current. Call for help until your out of the grip of the current. Then, swim diagonally back to shore, calling for help as well.

The rip current risk will drop Thursday, as Teddy quickly weakens on its journey inland and away from the Jersey Shore.

Related to this collection

Could the Pinelands burn, dead bait fish, a Wildcat in Europe and more

Voter Registration Day on Tuesday featured several events around the region. A few students passed by the registration table set up by Stockto…