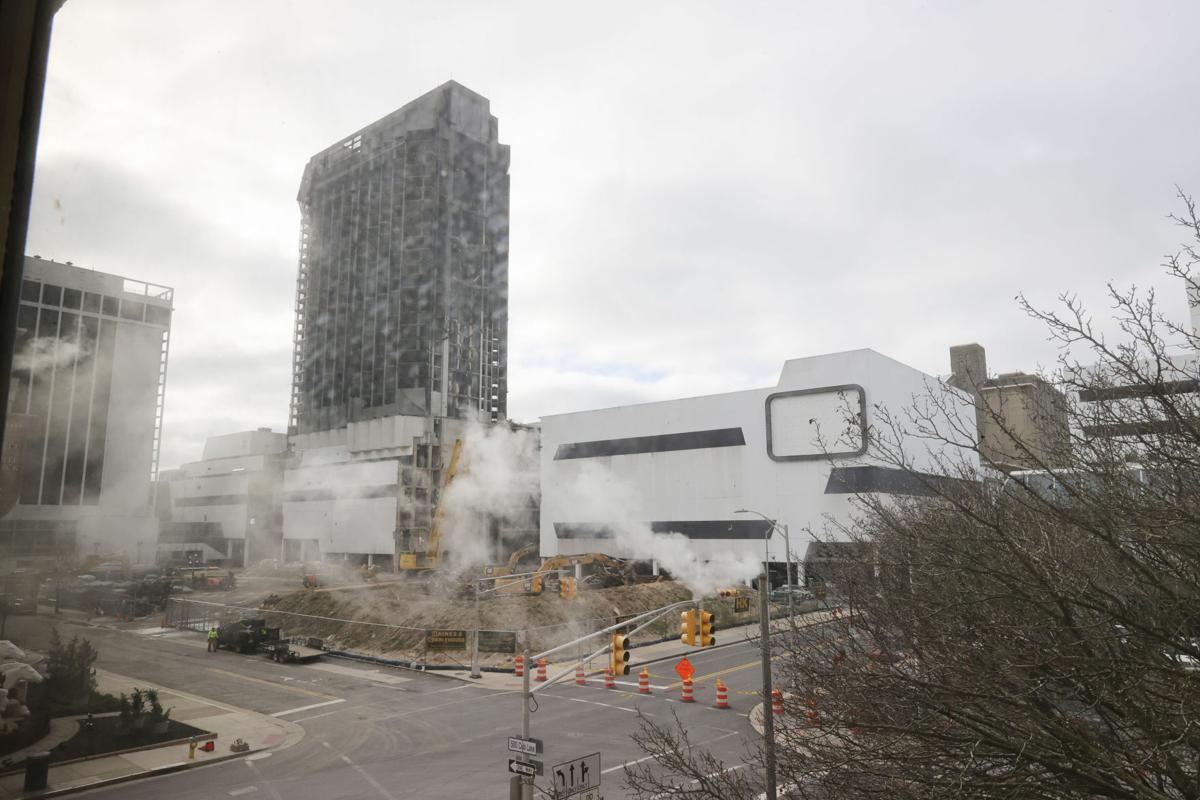 Demolition continues on the former Trump Plaza Hotel and Casino in Atlantic City in December. 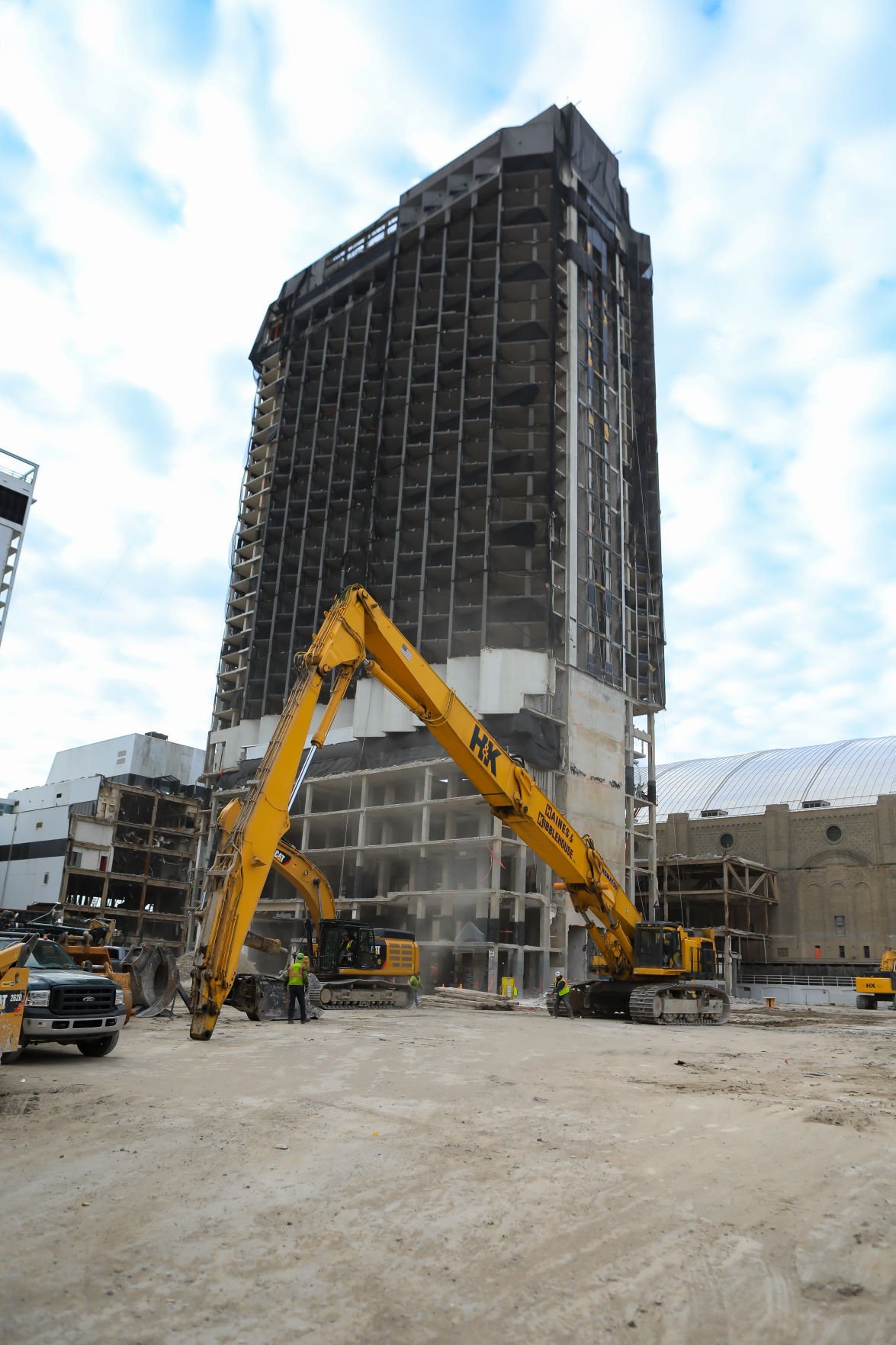 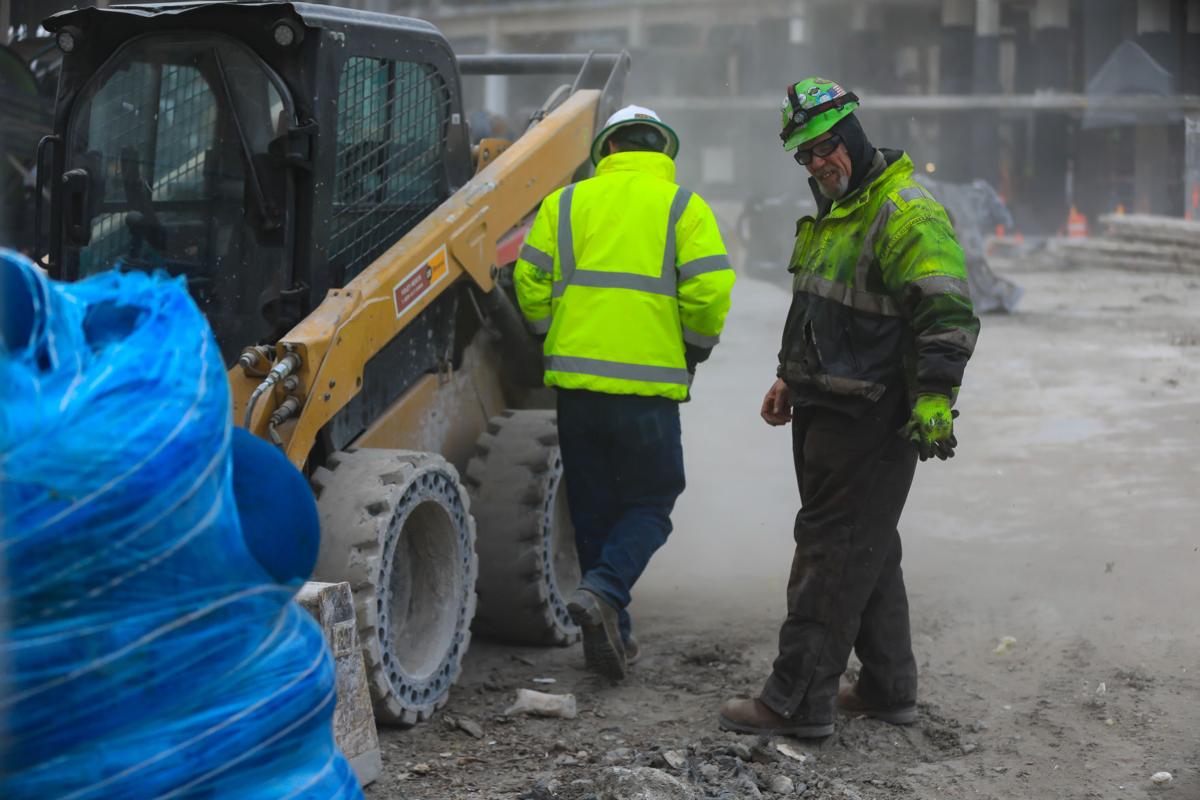 Workers prepare the former Trump Plaza Hotel & Casino for demolition Thursday. The property is expected to be destroyed Feb. 17.

ATLANTIC CITY — When Mayor Marty Small Sr. gave his first State of the City address last year, he laid out a number of robust plans for the resort.

The one that got the loudest applause and a standing ovation, he said, was the eventual demolition of the former Trump Plaza Hotel & Casino, marking the end of real estate developer Donald Trump’s presence in the city.

After months of planning, Trump Plaza is set to be demolished at 9 a.m. Feb. 17, Ash Wednesday, Small said Thursday during a news conference at City Hall.

Trump Plaza opened in 1984. Though Trump cut ties with the casino in 2009, he received a 10% fee for the use of his name on three of the city’s casinos at the time. In 2016, Icahn Enterprises bought them out of bankruptcy court. Trump Taj Mahal Casino Resort reopened as Hard Rock Hotel & Casino Atlantic City in 2018 after closing in 2016.

Small stressed that the decision to demolish had nothing to do with Trump’s presidency and that there were valid safety concerns for the unused building.

“I’ve done several national and international interviews, and people tried to make it about President Trump,” he said. “Like I said, take that name off the building — it could’ve been Resorts, the first casino in Atlantic City — and people would be interested in that. It was an imminent public health and safety matter that our construction official, Anthony Cox, deemed so. And the city took its argument to court, and we came to a resolution.”

“A lot of people were pessimistic because prior administrations and other officials in the past said that it was a goals of theirs,” Small said, “but (the demolition) never happened. But we believed in ourselves and went in a different direction.”

The announcement from Small on Thursday came days after an auction to push the button to implode the former casino was called off when the building’s owner, Carl Icahn, expressed safety concerns. The auction had been intended as a fundraiser for the Boys & Girls Club of Atlantic City.

Additionally, Small announced Thursday a partnership between One Atlantic Events and Ocean Casino Resort to auction spots to view the implosion safely from the windows of the One Atlantic event space in Playground Pier.

The auction for viewing spots will replace the auction to push the button for the explosives, which had raised $175,000 for the Boys & Girls Club before being called off. Icahn has since pledged to make that donation himself, so the newly announced partnership will not involve him.

Small thanked Icahn for his generosity.

Included with each winning bid for the new fundraising effort will be an overnight stay in a hotel room at either Hard Rock or Ocean and dinner for two. The proceeds will go to the Boys & Girls Club.

The city also plans to make Bader Field a viewing location for the implosion, Small said. Parking will be paid.

Fire Chief Scott Evans said the implosion will affect several blocks, and the city will designate certain areas as exclusion zones, evacuation zones, isolation zones and areas where residents must remain indoors. Notices to residents will be made several days in advance.

Evans added that sections of the Boardwalk will be closed several days in advance of the planned demolition. Some businesses may have to close during that time.

Icahn submitted plans to demolish the building in the summer, but the city’s idea to make an auction of it was done without his support. Continued disputes between the two parties led to the eventual cancellation of the first auction.

Small said the city will discuss with Icahn plans for the site once the property is gone.

A state report several years ago on Atlantic City suggested the Plaza be demolished to create so-called “greenscapes,” providing convenient access to the Boardwalk and ocean for nongambling visitors that could help reorient the “new” Atlantic City.

“That’s our next conversation,” Small said. “We’ve called Icahn and his group. It is extremely important that we work together. The city of Atlantic City has one shot with that land. “(It’s) not often that you have center-city, oceanfront available in any town.

“As aggressive as we were in making this demolition and implosion come to light, we want to be even more aggressive after the implosion with the cleanup and the alternate rebuild.”

GALLERY: Look back at Trump Plaza

ATLANTIC CITY — Rubaid Hassnat, 20, of Atlantic City, snaked through the line of vehicles at Bader Field on Thursday in his family’s minivan t…

ATLANTIC CITY — The Police and Fire Departments safely rescued a dog that fell into a hole on the States Avenue Beach on Jan. 18, according to…

OCEAN CITY — The Cape May County sheriff last Thursday ordered Gillian’s Wonderland Pier to be put up for auction, though its owner says that …

The former king of Spain was a Jersey guy, and his estate is being turned into a park

BORDENTOWN — At the crest of a windswept bluff overlooking the confluence of Crosswicks Creek and the Delaware River, Joseph Bonaparte — oldes…

ATLANTIC CITY — Bids to push the button and implode the former Trump Plaza Hotel & Casino have topped $175,000 as of Wednesday afternoon.

ATLANTIC CITY — Bids to push the button and implode the former Trump Plaza Hotel & Casino have topped $62,500 as of Thursday afternoon.

Demolition continues on the former Trump Plaza Hotel and Casino in Atlantic City in December.

Workers prepare the former Trump Plaza Hotel & Casino for demolition Thursday. The property is expected to be destroyed Feb. 17.