FILE - A gambler smokes while playing a slot machine at the Ocean Casino Resort on Feb. 10, 2022, in Atlantic City, N.J. A report issued Friday, June 17, 2022, by a Las Vegas gambling research company suggested that ending smoking in casinos will not result in significant financial harm to the businesses. (AP Photo/Wayne Parry, File-) 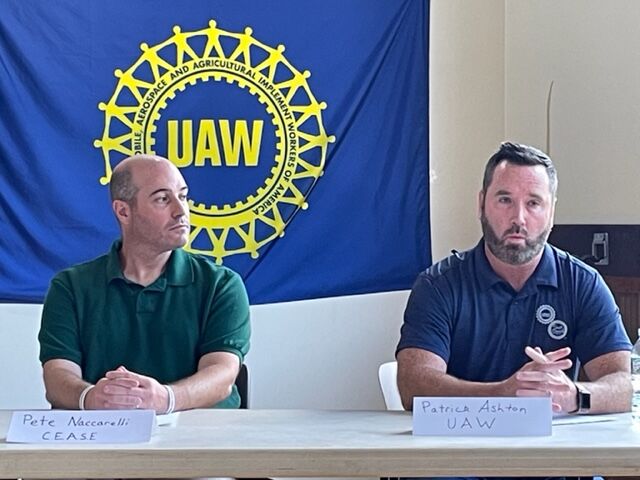 “For the UAW, the biggest issue in health and safety is smoking on the casino floor,” said the UAW’s Patrick Ashton, right. The UAW represents dealers in several Atlantic City casinos. At left is Pete Naccarelli, co-leader of Casino Employees Against Smoking’s Effects and a casino dealer.

LINWOOD — As long as there is no indoor smoking in casinos, and no casino worker is exposed to secondhand smoke, groups pushing to close the casino smoking loophole will help provide alternatives for smoking customers, representatives said Wednesday during a news conference.

Held at the headquarters of the United Auto Workers at the Cornerstone Building on New Road, participants said they would support outdoor smoking areas, and perhaps outdoor gaming areas with smoking, as long as there is substantial ventilation and no workers have to interact with smokers.

“The solution is an outdoor smoking area,” said Pete Naccarelli, co-leader of Casino Employees Against Smoking’s Effects and a casino dealer. “It’s not acceptable to me to blow smoke in my face. Indoors or outdoors, that’s unhealthy.”

They are now co-sponsored by half of New Jersey’s legislators, and the groups are asking lawmakers to move them quickly when the Legislature begins meeting again in September, Naccarelli said.

“When Maryland opened (casinos) from the beginning they were smoke free,” said Chris Moyer with Americans for Nonsmokers’ Rights. “Initially they had outdoor areas where people could smoke and gamble, but they have since become hardly distinguishable from indoor spaces.”

Casinos have built walls around them and roofs over them, and left only small window openings, Moyer said.

“The way the bill was written it allowed them to create outdoor areas that are not truly outdoors,” Moyer said, making a mockery of the law. “That would not be an acceptable situation here.”

Current law allows casinos to allow smoking in 25% of their gaming space, but the air is shared with non-smoking areas, said the American Heart Association’s Corinne Orlando.

“It’s been proposed to have indoor rooms, even if enclosed (for smokers only),” Orlando said. “That’s not something we think is a solution. The doors would open and close, and workers would have to work in rooms.”

Naccarelli said he cannot escape players’ secondhand smoke now, which is often blown into his face as he works.

“What about dealers who are pregnant, people who got over cancer, have lung issues or asthma? I don’t have those problems yet, but I probably will from secondhand smoke,” Naccarelli said.

The Casino Association of New Jersey has strongly opposed the bills, saying banning smoking would harm the industry and cost jobs.

A majority of South Jersey legislators, including the entire Atlantic City delegation, supports the bills.

A new study released in June by Las Vegas-based C3 Gaming earlier this year found that banning smoking no longer results in a loss of customers for casinos.

Casinos were closed for three months in 2020 due to the COVID-19 pandemic, and when they reopened in the summer of 2020, the state did not allow indoor smoking because the pandemic was in full swing.

But more than a year ago, the state allowed indoor smoking to resume.

Report: Smoking bans no longer a threat to casino revenue in AC, other markets

ATLANTIC CITY — For decades, it was accepted wisdom in the casino industry that eliminating …

Robert Zlotnick of Pleasantville’s Atlantic Prevention Resources said it started with a group of 10 to 20 casino workers and has grown to more than 2,000 such workers.

“For the UAW, the biggest issue in health and safety is smoking on the casino floor,” said the UAW’s Patrick Ashton.

There is such a shortage of workers, the idea that jobs will be lost is ridiculous, Ashton said.

Almost two-thirds of New Jerseyans support banning smoking in casinos, according to a Stockt…

“The labor shortage is severe,” Ashton said. “To say (eliminating smoking) will affect employment in casinos is factually not true.”

Casino executives are refusing to voluntarily end indoor smoking, Naccarelli said, in part because a lot of them are stuck in the past.

“They have been in the business 40 years. This isn’t 1985 anymore,” Naccarelli said. “We are seeing reports now that casinos that have gone nonsmoking have done better,” such as Philadelphia-area casinos.

“Casino players would swim through a moat of alligators to get back to that table,” Naccarelli said. “They’re coming back. It’s a ridiculous argument.”

NJ casino, sports and online gambling revenue up 2.2% in June

FILE - A gambler smokes while playing a slot machine at the Ocean Casino Resort on Feb. 10, 2022, in Atlantic City, N.J. A report issued Friday, June 17, 2022, by a Las Vegas gambling research company suggested that ending smoking in casinos will not result in significant financial harm to the businesses. (AP Photo/Wayne Parry, File-)

“For the UAW, the biggest issue in health and safety is smoking on the casino floor,” said the UAW’s Patrick Ashton, right. The UAW represents dealers in several Atlantic City casinos. At left is Pete Naccarelli, co-leader of Casino Employees Against Smoking’s Effects and a casino dealer. 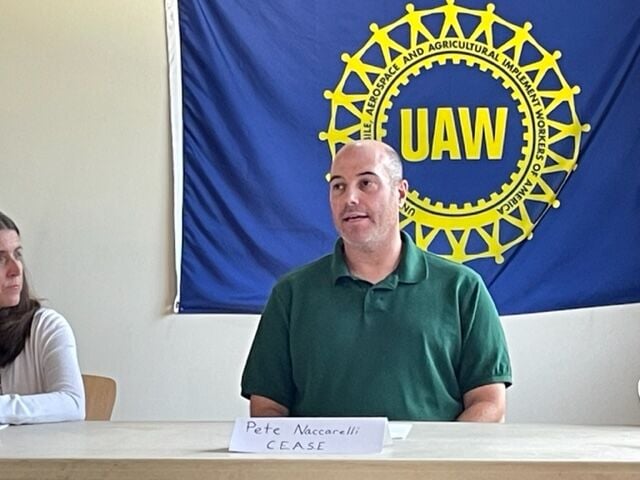 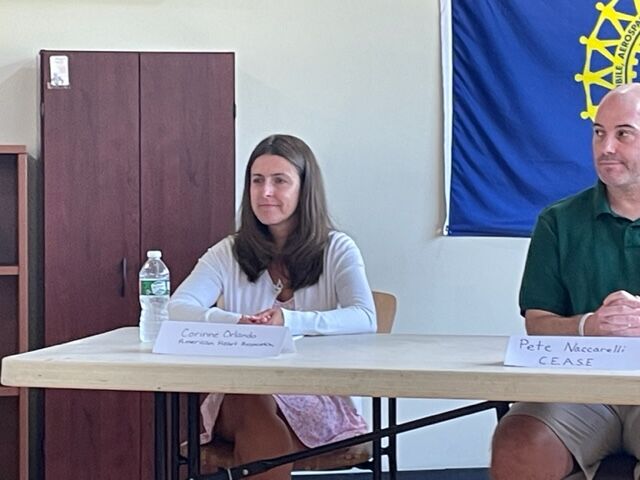