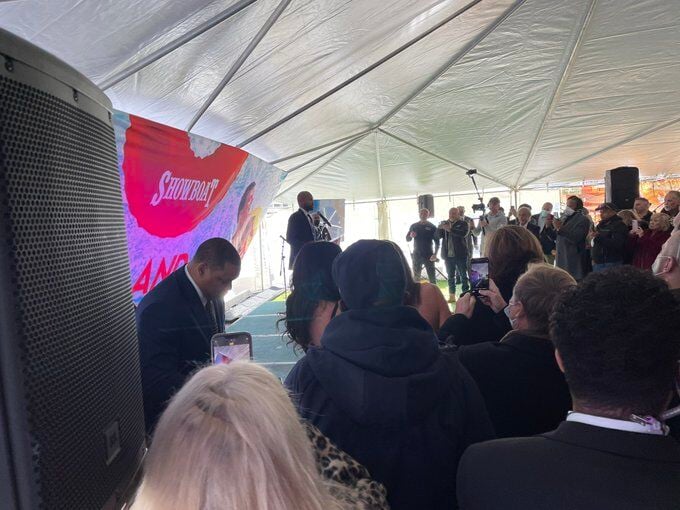 Bart Blatstein speaks during groundbreaking for Showboat Waterpark on Wednesday.

A rendering shows an indoor waterfall planned for Showboat's waterpark in Atlantic City.

10:45 a.m.: Developer Bart Blatstein said that there should be no issue with funding for the waterpark.

Blatstein says 100 pct certainty money is there for Atlantic City water park and it’s “all my money.” #acpress pic.twitter.com/asaOHU0FLv

10:30 a.m. : People are starting to gather for the event. Guest are being treated to mimosas.

ATLANTIC CITY — A groundbreaking for a proposed waterpark at the Showboat Atlantic City hotel will be held Wednesday.

Groundbreaking for the Island Waterpark will be at 10:30 a.m. The park will be built on New Jersey Avenue next to the Showboat.

Investments in new projects on tap for 2022 in Atlantic City

ATLANTIC CITY — The city’s casinos are forging ahead with ambitious new projects in 2022, ev…

The indoor waterpark is expected to occupy 103,000 square feet and will include slides, pools and a lazy river, food and retail outlets, lounge areas and party rooms, Showboat said.

The waterpark is expected to be a year-round attraction, featuring a retractable glass roof for indoor climate control in colder months.

Citigroup Inc. took over in July as the underwriter of the $95 million municipal bond sale to finance the construction of the waterpark. The previous underwriter, Janney Montgomery Scott, was replaced after failing to sell the unrated bonds.

In a presentation to the Atlantic County Improvement Authority in February, Blatstein said the water park would be “best in class” and the first year-round family entertainment resort in Atlantic City.

The Casino Reinvestment Development Authority granted site plan approval for the park in early 2021. The authority also granted the project an Entertainment Retail District designation. As part of the designation, the project will receive $2.5 million per year for 20 years in sales tax rebates.

ATLANTIC CITY — The city has accomplished or at least begun most of the projects laid out in a 2.5-hour State of the City speech back in Febru…

ATLANTIC CITY — For decades, the resort’s casinos have identified as being part of either the Boardwalk or the newer, hipper Marina District.

Stressing there is no risk to the county taxpayer, the Atlantic County Improvement Authority moved Thursday to allow Citigroup to help sell th…

ATLANTIC CITY — Entertainment offerings in the city today are a lot different than when Fred Gould was a kid.

This is not the first time a waterpark has been planned for Atlantic City; take a look back at past plans

Bart Blatstein is not the first developer to want to bring a waterpark to the resort. Over the last 20 years, several developers have proposed…

Bart Blatstein speaks during groundbreaking for Showboat Waterpark on Wednesday.

A rendering shows an indoor waterfall planned for Showboat's waterpark in Atlantic City.