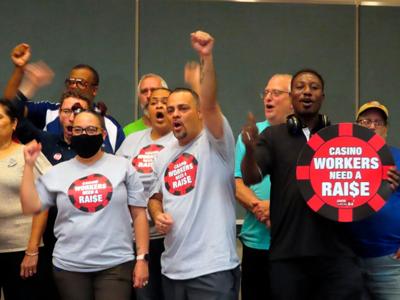 1 Unite Here Local 54 has authorized a July 1 strike against Borgata Hotel Casino & Spa and the three casinos owned by Caesars Entertainment — Caesars Atlantic City, Harrah’s Resort Atlantic City and Tropicana Atlantic City — and a July 3 strike against Hard Rock Hotel & Casino Atlantic City if new labor deals are not in place by then. So far, Local 54 has secured agreements with Ocean Casino Resort and Bally’s Atlantic City to honor the terms of contracts eventually reached with some of the larger casino companies in town, but no contracts have yet been agreed upon. That effectively means they will not be struck, the union has said. The union said: “Bally’s and Ocean are in the green zone, Resorts and Golden Nugget are in the yellow zone and the rest are in the red zone.”

2 A report by Local 54 warned a strike could cost Caesars, Harrah’s, Tropicana and Borgata a total of $2.6 million a day in losses. The city’s top-performing casino, Borgata, could lose $1.6 million a day in the event of a strike, and the three casinos owned by Caesars Entertainment could collectively lose an additional $1 million a day. Hard Rock’s finances were not included in the report.

3 A strike at the height of summer could have a serious impact on the city. The union, which made its projections based on past casino revenue and earnings data reported to the state, assumed a strike would cause revenue to decline by 25% in the third quarter of this year compared to the same period in 2021. The impact would be more widespread if the strikes start to affect the city’s summer hosting schedule, which includes the national NAACP convention in mid-July. Atlantic City’s local government is concerned and recently urged its dominant industry to avoid a possible strike by paying casino workers more and hiring more of them. Council passed a resolution June 22 supporting the workers and hoping to head off a strike and asking the industry “to raise wages and staffing and negotiate in good faith to avert a strike.” “Inflation is pressuring working people, and we want the union workers and families to be made whole,” Councilman Kaleem Shabazz said. “Atlantic City needs a peaceful summer free of strife and uncertainty.”

4 The union says it is seeking “significant” wage increases in the next contract to help workers deal with financial setbacks caused by the coronavirus pandemic and rapidly rising prices. The casinos and their online partners are collectively making more money now than before the pandemic hit. But the casinos say those statistics are misleading because they get to keep only about 30% of online and sports betting money, with the rest going to their third-party partners. They say in-person revenue won from gamblers is the crucial metric, and not all the casinos have surpassed their pre-pandemic levels.

5 The July Fourth weekend is typically one of the busiest of the year for Atlantic City’s casinos, so a labor action would seem to put more pressure on the industry. The contracts with Atlantic City’s nine casinos expired June 1.

6 On June 1, Local 54 picketed outside Tropicana. It was selected for the picket in recognition of Caesars’ outsize role as the largest casino employer in the city. During the picketing, workers surrounded the casino, marching along the Boardwalk, on Pacific Avenue and on side streets, but did not interfere with people entering or leaving the casino. They chanted, banged drums and plastic buckets, and blew whistles.

7 Strikes aren’t common, but they do happen and a few have been notable. In July 2016, the union walked out against the former Trump Taj Mahal Casino Resort, which ended with the casino shutting down in October of that year. It has since reopened under different ownership as the Hard Rock. The union also went on strike in 2004 for 34 days. One of the most memorable and violent strikes dates to Sept. 16, 1986, when more than 13,000 casino employees went on strike. Police said 33 people were arrested and 54 people injured, including two who were hospitalized with head injuries. The next day, an agreement was reached and workers returned to work.

Looking back at the casino workers strike of 1986