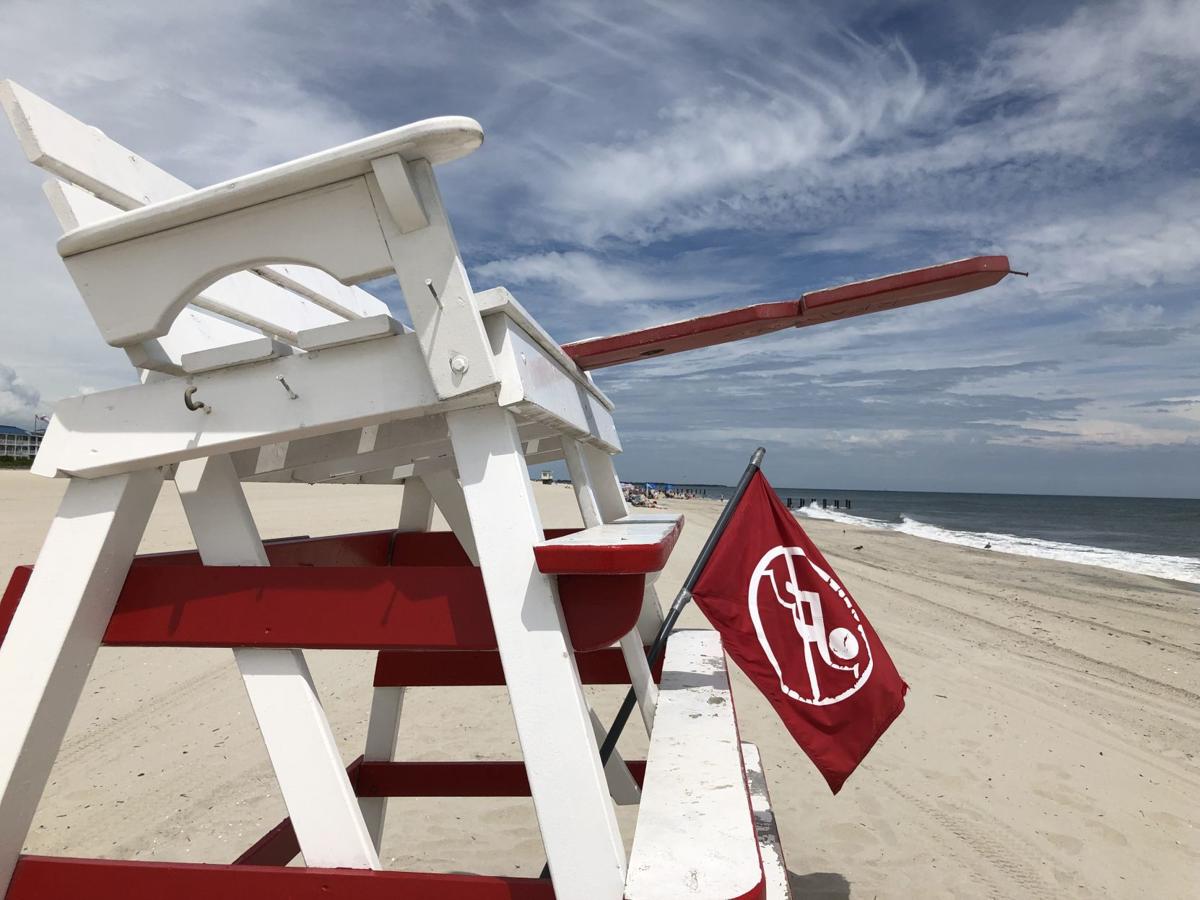 Norman Inferrera III, a first-year lifeguard in Cape May, died of injuries sustained after his surf boat overturned on Thursday. Cape May city officials say he was the first lifeguard to die in the line of duty in the history of the Cape May Beach Patrol.

CAPE MAY — Cape May plans to name a beach for Norman Inferrera III, the first member of the city’s beach patrol to die in the line of duty.

The decision will need the support of City Council. According to Mayor Zach Mullock, a resolution is set to be presented to the city’s governing body at a special meeting at noon Wednesday.

“The only thing on the agenda will be the renaming of that beach,” Mullock said.

Cape May and surrounding communities were shocked and saddened by the loss of Inferrera, 16, of Phoenixville, Pennsylvania, who died on Friday. He was seriously injured on Thursday when a wave capsized his surf boat near the Reading Avenue beach.

That is the beach that is expected to be named in his honor.

“We received news from the Cape May Beach Patrol today that a beach in Cape May is being named after Norman,” wrote Inferrera’s aunt, Kathleen Inferrera Price, on the GoFundMe page launched to help the family cover medical bills. “The family is deeply moved and became very emotional upon the news.”

Throughout Cape May, there has been an outpouring of grief for Inferrera and sympathy for his family. Lifeguards from throughout New Jersey arrived in Cape May over the weekend to help protect beaches, and city officials said grief counselors were available to Cape May guards.

Gov. Phil Murphy said Monday that he spoke with members of Inferrera’s family over the weekend. At his weekly COVID-19 response briefing from the Trenton War Memorial, Murphy described Inferrera’s death as tragic, and supported the proposal to name a Cape May beach in his honor.

“Let’s take a moment to remember that our lifeguards take on a special responsibility. Norman was literally living his dream, and being part of the team that keeps everyone safe,” Murphy said. He said he had spoken to members of the Inferrera family.

He called on people throughout the state to pray for the family.

The city has named three other beaches in honor of individuals. Two of those are for lifeguards. Hughes Beach was named in honor of U.S. Rep. Bill Hughes, who was instrumental in gaining federal funding for Cape May’s beach replenishment work. The beach in front of the Beach Patrol headquarters in named for Clete Cannone, the longtime captain of the beach patrol, when the captain was the top officer. He led the patrol from 1948 until 1980.

In 2012, an adjacent beach was named for Harry “Buzz” Mogck Jr., who replaced Cannone as captain and was later named the Beach Patrol chief. Mogck retired in 2020.

This is the first time a Cape May beach will have been named for a lifeguard killed in action.

“This has never happened before in Cape May,” said city manager Mike Voll.

Family members have not responded to requests for an interview, but the family has communicated with the Cape May community through the GoFundMe page. With an original goal of $15,000, the page has raised 10 times that amount, with pledges at $158,870 on Monday morning.

Kathleen Inferrera Price wrote that the family is overwhelmed by the kindness and encouragement.

“Your love and support at this time of complete devastation will forever be remembered!” she wrote.

Price wrote of the pride Inferrera felt about being part of the beach patrol, saying he was involved in several rescues, including that of a 4-year-old child. She often uses his family nickname “Champ” in posts.

Price added that the beach patrol has informed the family that Inferrera’s medical bills will be covered through the city’s insurance. She said the family will use most of the funds to establish a scholarship in his memory, issued each year to the Cape May Beach Patrol’s Cannone Scholarship Fund and for students at Inferrera’s school, Phoenixville Area High School.

“Champ would be so glad to know that he will be helping future college bound students achieve their dreams and goals! I can clearly see his smile now,” Price wrote.

Phoenixville Area High School principal Rose Scioli said school counselors would be available to students on Monday, according to an email memo shared in a Facebook group.

“Those who knew Norman know what a remarkable young man he was, and this loss is felt greatly by our community,” Scioli said in the email. “We ask that you hold the Inferrera family in your thoughts at this time.”

This was Inferrera’s first year as a lifeguard. In order to earn a spot on the lifeguard stand, Inferrera had to undergo a rigorous physical test and an interview process, along with extensive additional training in rescue and first aid, according to Harry Back, the chief of the Cape May Beach Patrol.

“It’s very competitive,” he said. Open water lifeguards must be at least 16, both under New Jersey regulations and under the certification process established by the United States Lifesaving Association.

Back described Inferrera as an exceptional young man, relaying a story from when he interviewed with the senior members of the beach patrol after the grueling qualifying test.

“He came up to every single lieutenant and myself and introduced himself,” Back said. “It was so impressive from the get-go.”

He said Inferrera told him he taught himself to swim using YouTube videos and that he had dreamt of becoming a lifeguard.

Over the weekend, Hurricane Henri brought towering waves to Cape May, but on Thursday, conditions were not severe, Back said, certainly not enough to keep a trained lifeguard out of the water. Guards routinely train on the surf boats, he said, and use them to travel between beaches as well.

Inferrera was alone in the boat when it overturned. He was knocked unconscious and badly injured.

Fellow lifeguards quickly pulled him in to the beach and began resuscitation efforts while the ambulance responded, according to Voll. Inferrera was taken to Cape Regional Medical Center before being transported by helicopter to the trauma center at Cooper University Hospital in Camden.

The city and the Inferrera family announced his death Saturday morning.

“No words can express the sadness suffered by all of our Beach Patrol family,” Mullock said in the city’s prepared statement.

A funeral mass is planned for Inferrera at 11 a.m. Friday at St. Teresa of Avila Parish, 1260 Trooper Road in Norristown, Pennsylvania, Voll stated on Monday. Details are expected to be announced soon about a viewing set for Thursday evening.

Vol said Monday that a busload of Cape May lifeguards, officials and community members plan to travel to Pennsylvania for the funeral Friday. He said lifeguards have been deeply saddened and want a chance to pay their respects.

The Philadelphia Inquirer contributed to this report.

MARGATE — A 67-year-old surfer was pulled unconscious from the water near the Margate Pier about 4 p.m. Friday, police said, and later died at…

Murphy orders flags at half-staff for Cape May lifeguard

Gov. Phil Murphy on Tuesday ordered U.S. and New Jersey flags at half-staff at all state buildings and facilities Friday in honor of Norman V.…

CAPE MAY – For the waning days of the summer of 2021, Cape May’s surf boats will stay on the beach after the death of a 16-year-old lifeguard.

Though not quite a perfect storm, Hurricane Larry looks to be a very good one, at least as far as the region’s surfers are concerned.

CAPE MAY — The Cape May Beach Patrol and community are mourning the death of a 16-year-old first-year lifeguard.

Norman Inferrera III, a first-year lifeguard in Cape May, died of injuries sustained after his surf boat overturned on Thursday. Cape May city officials say he was the first lifeguard to die in the line of duty in the history of the Cape May Beach Patrol.