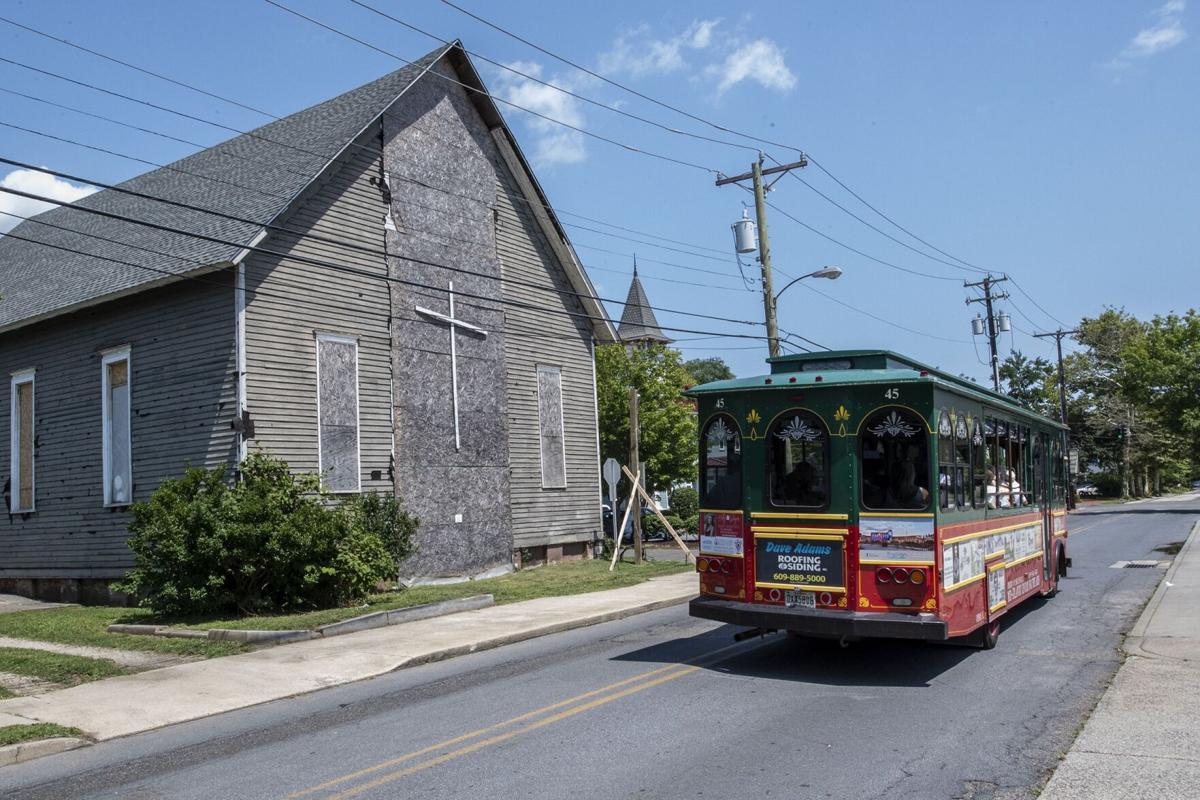 A tourist trolley rolls past the 133-year-old Allen African Methodist Episcopal Church, which is set to be renovated and added to a collection of Black heritage sites that have been repurposed as community centers in Cape May. 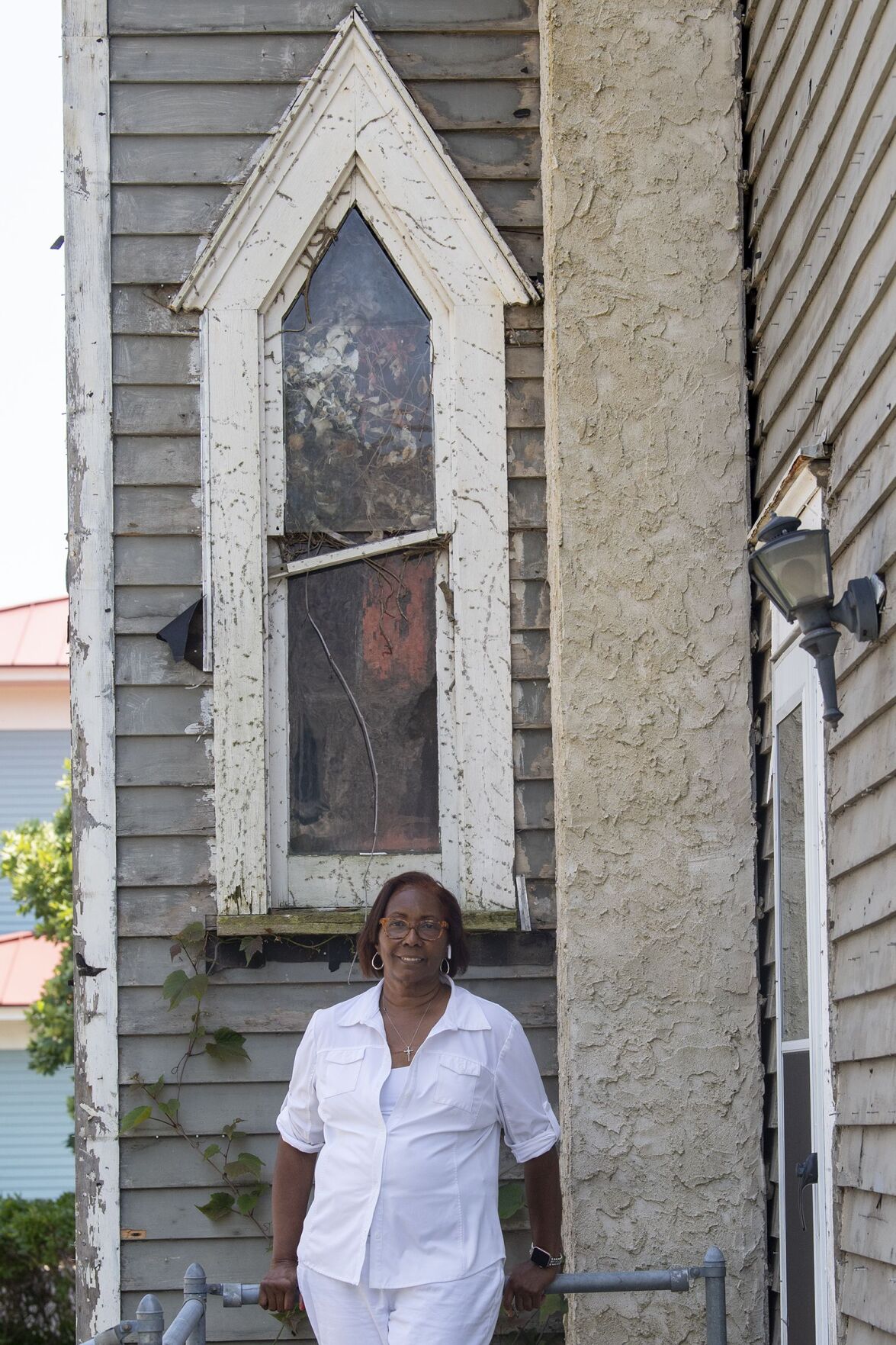 Community activist Bernadette Matthews says plans to create a downtown "museum row" from Black heritage sites in Cape May are "a tribute to something that was hiding in plain sight."

CAPE MAY — It was about 11:30 a.m. June 9, 2018, when a truck driving on Osborne Street toward Franklin Street inadvertently clipped a row of power lines, yanking them off a utility pole.

Those live and loose wires landed on a 133-year-old church.

For 90 minutes, electric flames lashed the iconic bell tower and gable roof of the Allen African Methodist Episcopal Church. And for three years the building sat idle as the governing body of the church decided to sell the property instead of repair it. Parishioners lobbied for tarps and plywood bandages to address the gaping wounds, fending off the elements from soaking their cultural heirloom into submission.

In April, the city stepped in and bought the property for $350,000. Officials plan to fully restore the space and incorporate it into a downtown “museum row” clustered around and along the 700 block of Franklin Street, mostly consisting of repurposed Black heritage sites.

Community activist Bernadette Matthews called the row “a tribute to something that was hiding in plain sight.”

CAPE MAY — Cape May is mourning former Police Chief Robert Lane Boyd, who came to the city a…

The sites include the Harriet Tubman Museum, sprouting from the Macedonian Baptist Church’s old clergy house, which was built with wooden pegs instead of nails.

And the Franklin Street School, opened as a segregated institute for Black children in 1928, which will house the county’s new public library as well as the Center for Community Arts.

Updates are also planned for the nearby Stephen Smith House, the vacation home of the industrialist and Underground Railroad agent who bought his freedom from Pennsylvania slave owners and became one of the wealthiest Black men of the 19th century.

The row will be rounded out by the existing Cape May Fire Museum and a forthcoming new building for the Greater Cape May Historical Society.

For the Allen Church, Mayor Zachary Mullock sees it as maintaining a community purpose, while also becoming the new home to the East Lynne Theater Company.

“What I like about the theater though is we won’t have a lot of matinees. So that gives us a lot of flexibility during the daytime for other community events,” Mullock said. “And I think the acoustics here are top notch.”

Mullock estimated renovation costs at $600,000, including a historically accurate replica of the original bell tower, which dates to Allen Church’s opening in 1888. The original clapboard will be preserved, and the stained glass windows, which date to the 1920s and include names of some founding members, were repaired and will be re-installed.

“We will be replacing as little as possible,” he said.

From the mid-19th century to well into the 20th century, the museum row area was home to the city’s Black workers, who then accounted for about 30% of the city’s population. It also included more than 50 businesses owned or operated by Black residents, from shoe repair shops to haberdasheries. Then the 1960s brought urban renewal, and the 1970s brought the Washington Street Mall and rising real estate value, and the Black population was bought out and pushed out, Matthews says. Today, Black residents account for about 2% of the city’s population, according to Mullock.

And the community’s shrinking influence was felt in the Allen Church congregation, which in the past few decades dwindled and was having trouble keeping up with the building’s maintenance even before the fire.

The Rev. Pauline Couch, pastor of Allen Church, said the remaining members of the congregation have been worshipping across the street at Macedonia Baptist Church.

West Cape May the latest to OK cannabis sales

Ralph E. Hunter Sr., who founded the African American Heritage Museum of Southern New Jersey, said he has mixed feelings about these adapted reuse projects. He’s fine with Cape May transforming historic Black sites into tourist attractions for a majority white clientele, but he’s not fine with the city claiming it is celebrating local Black history.

“You’re not celebrating anyone,” said Hunter, 84. “What you’re doing is creating a different kind of tourist market to say that one point in time in our history there was a place where African Americans lived and worshiped. And now they can continue to worship, but they can’t afford to live here.”

“It’s a way to memorialize the fact that African Americans helped build this city,” she said.

HAMILTON TOWNSHIP — For more than a year and a half, traffic on Main Street in downtown Mays Landing from Lenape Avenue to Route 50 was nearly…

BRIDGETON — A weekend-long event is scheduled to take place this week to celebrate the life of Prince Hall, a Revolutionary war-era abolitioni…

CAPE MAY — An agreement has been reached between the city and its police union, officials said Friday.

The Atlantic City Free Public Library’s extensive African American archival collections will soon become easier for the public to use, thanks …

Cape May may receive $240,000 to repair fire damage to historic Black church

CAPE MAY — Cape May County is set to provide Allen African Methodist Episcopal Church with $240,000 for the first phase of a project to restor…

A tourist trolley rolls past the 133-year-old Allen African Methodist Episcopal Church, which is set to be renovated and added to a collection of Black heritage sites that have been repurposed as community centers in Cape May.

Community activist Bernadette Matthews says plans to create a downtown "museum row" from Black heritage sites in Cape May are "a tribute to something that was hiding in plain sight."