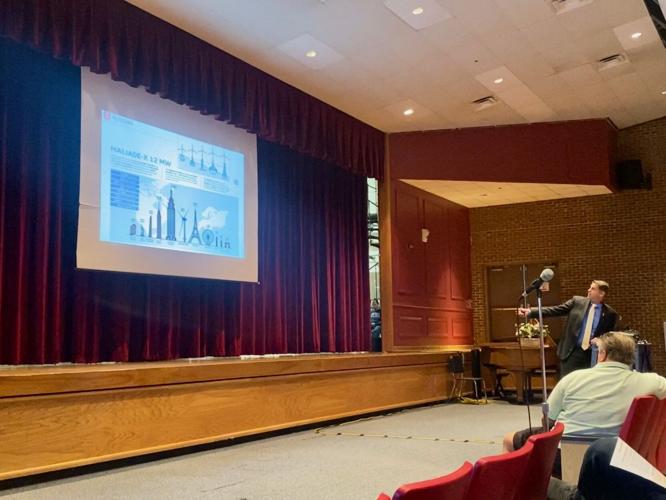 Brigantine Mayor Vince Sera held a forum Saturday during which residents could get information while voicing their opinions about offshore wind projects under development. 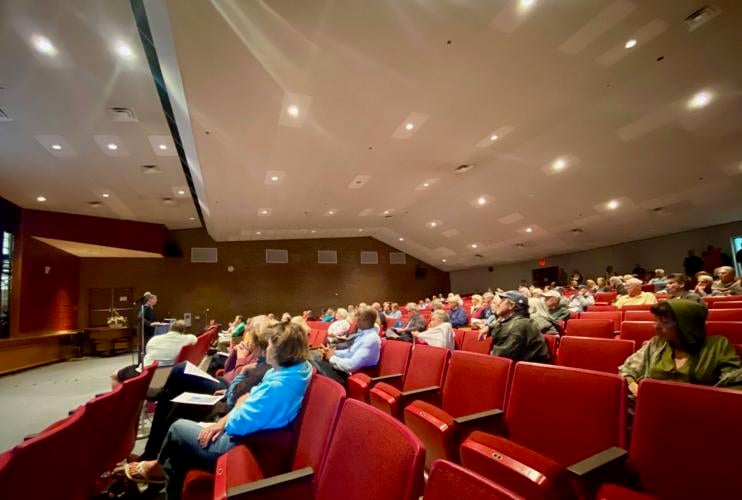 BRIGANTINE — Having clean energy as a renewable resource may sound nice, but residents still have questions and concerns about the offshore wind projects planned just off the island’s coast, which is why the mayor held an informational meeting last weekend.

Nearly 100 residents, second homeowners and public officials attended the forum Saturday at the Brigantine Community School to discuss the projects and their potential impacts on the barrier island.

“There are good things that are going to come about this, as well as the negative impacts that we’re going to talk about today,” Mayor Vince Sera said at the meeting.

Aided by a slide presentation from Dr. Doug Zemeckis of Rutgers University, Sera described the windmill projects and how they could affect commercial fishing, boat traffic, navigation and the ecosystem.

Many residents said the cons outweigh the pros.

Beach replenishment to return to Ocean City this fall

OCEAN CITY — As the remnants of a powerful storm crashed into Jersey shore beaches, bringing…

“I’m just trying to figure out the positives in this,” said resident Mary Anne Ford. “The pro column is a big blank slate.”

Sera countered Ford’s statement, saying the wind farms would offer opportunities for jobs, education for residents and a chance to create a profitable industry locally, since a surplus of energy generated from the windmills could be sold to neighboring states like New York or Pennsylvania.

Second homeowner Susanne Moore said there needed to be more information accessible to those who don’t live on the island year-round, while many residents who spoke worried that the sight of the 1,200-foot windmills would be a detriment to the area, specifically property values.

Sera said neither of the offshore wind companies has provided an accurate visual of what the windmills would look like from the beach, but each is expected to be around the size of the Empire State Building.

Visibility is also one of the main concerns for other shore towns including Ocean City, whose representatives were at the Brigantine meeting Saturday.

A significant number of Ocean City residents are largely against the offshore wind project, noting environmental and visibility issues. Ørsted’s Ocean Wind project includes running a power line from the wind farm under the beach and across Ocean City to the former B.L England power plant in Upper Township, where the energy generated by the wind farm would enter the power grid.

Ocean Wind has a petition filed with the New Jersey Board of Public Utilities to use a little more than a half-acre of land owned by Ocean City that’s listed as open space under the state’s Green Acres program, which residents are also concerned about.

Murphy has said the wind industry is a new economic driver that will help wean the United States off fossil fuels.

In September, the governor signed Executive Order No. 307, which raises the state's offshore wind power goal to 11,000 megawatts by 2040, as he pushes for New Jersey to be a leading contributor in clean energy.

Murphy also said on WNYC’s “Ask the Governor” program last weekend that the wind projects should be out farther since shore communities like those on Long Beach Island had expressed concerns about visual impact.

Sera said if the wind turbines could go out farther, they would benefit all shore communities.

Residents also expressed concerns about how the wind farms would affect the island’s marine life, habitat and fishing industries, alleging a lack of environmental studies.

Sera said the lack of in-depth environmental impact studies was why a group of LBI residents was filing a lawsuit against the federal Bureau of Ocean Energy Management.

But Lisa Landers, a BOEM representative present at the third and final public hearing planned to accept comments on a draft environmental impact statement on the Ocean Wind proposal, said the adverse impacts outlined in the report would be “negligible to moderate.”

The more than 1,400-page report will help guide the federal permitting process for Ocean Wind, the farthest along of several offshore wind projects in the pipeline. A final report is expected by March 2023, with Ørsted and PSEG predicting the project will be operational by 2024. Once the blades start turning, the project is expected to power a half-million homes.

“I hope people understand that this is bigger than we realize,” Sera told the crowd. “It has much bigger impacts than we understand, and we need to make sure that whatever decisions we make as one whole community, we do it right. Because we don’t get a second chance on this.”

"I'm just trying to figure out the positives in this. The pro column is a big blank slate."

New Jersey’s development of offshore wind energy has proceeded quickly, leaving the public’s awareness and voice to try to catch up. A brief t…

Plans to consider, but no quorum on Atlantic City Planning Board again

ATLANTIC CITY — The city is working to bring new development and jobs here, but its Planning Board seems to be dropping the ball.

Attorneys for Cape May County, Ocean City and other towns on Thursday pushed for the state Board of Public Utilities to reject a proposal to r…

OCEAN CITY — In the long and ongoing fight over offshore wind, people for and against plan to attend a Monday meeting set for 6 p.m. at The Fl…

Weather: Dry for rest of week, but rain, wind, tidal flooding from Ian after

Ian will already be impacting the region Thursday with the blanket of high clouds overhead. We'll stay dry through Friday. A change in the forecast now means Saturday looks to be wet, as coastal flooding and gusty winds take us through early next week.

Brigantine Mayor Vince Sera held a forum Saturday during which residents could get information while voicing their opinions about offshore wind projects under development.