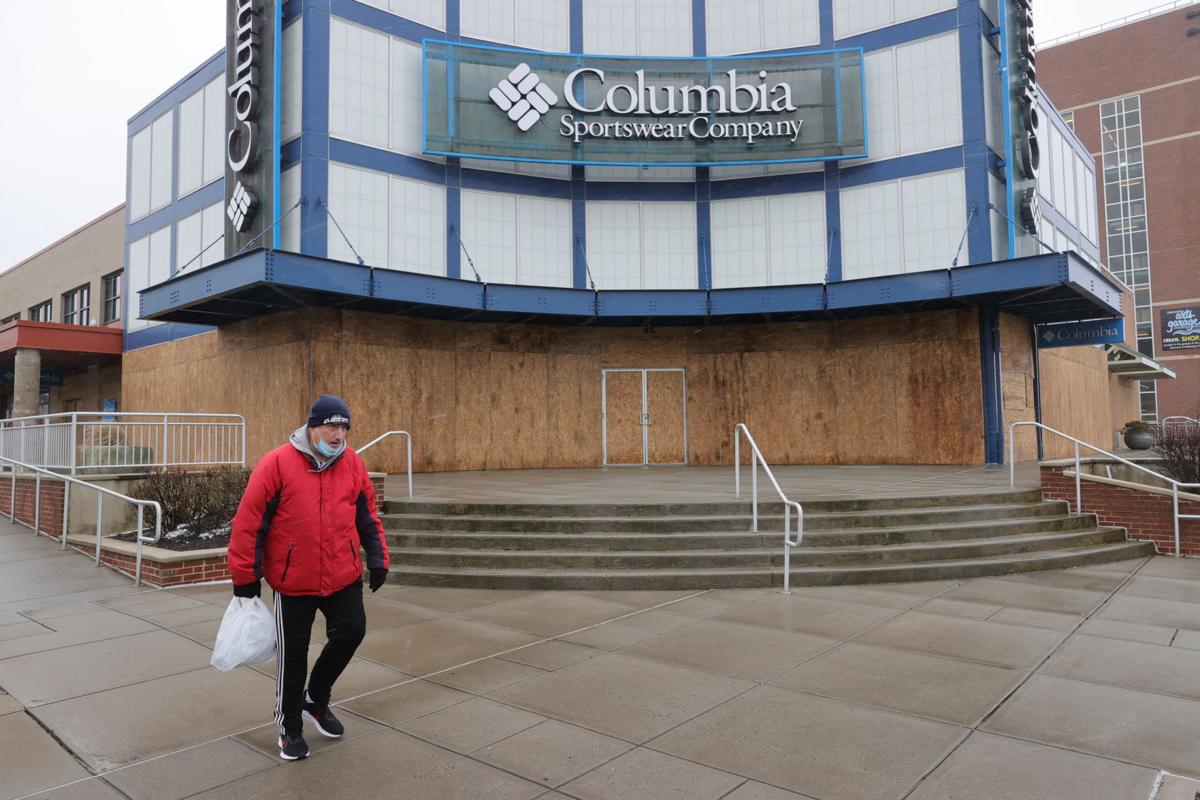 A spokesperson for Columbia Sportswear says the company’s Atlantic City outlet store was broken into three times in November and December. 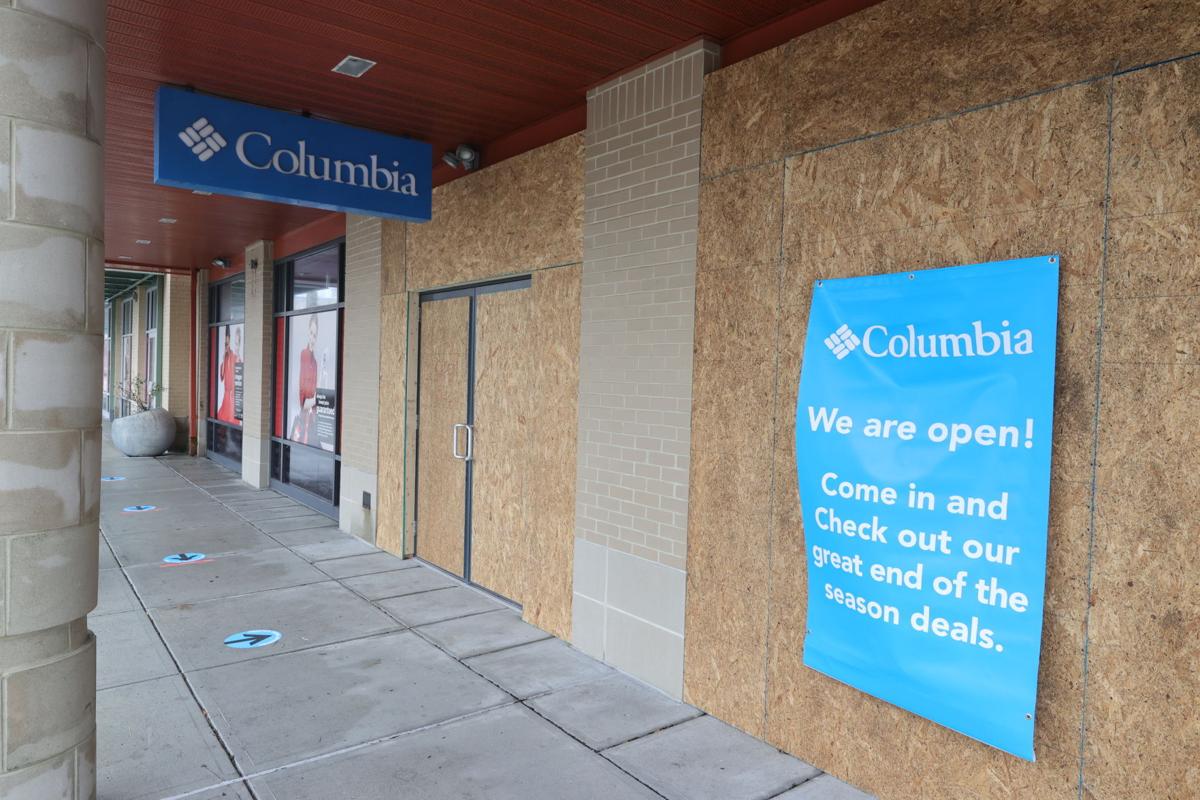 The Columbia Sportswear store at Tanger Outlets The Walk in Atlantic City has been boarded up since the fall. 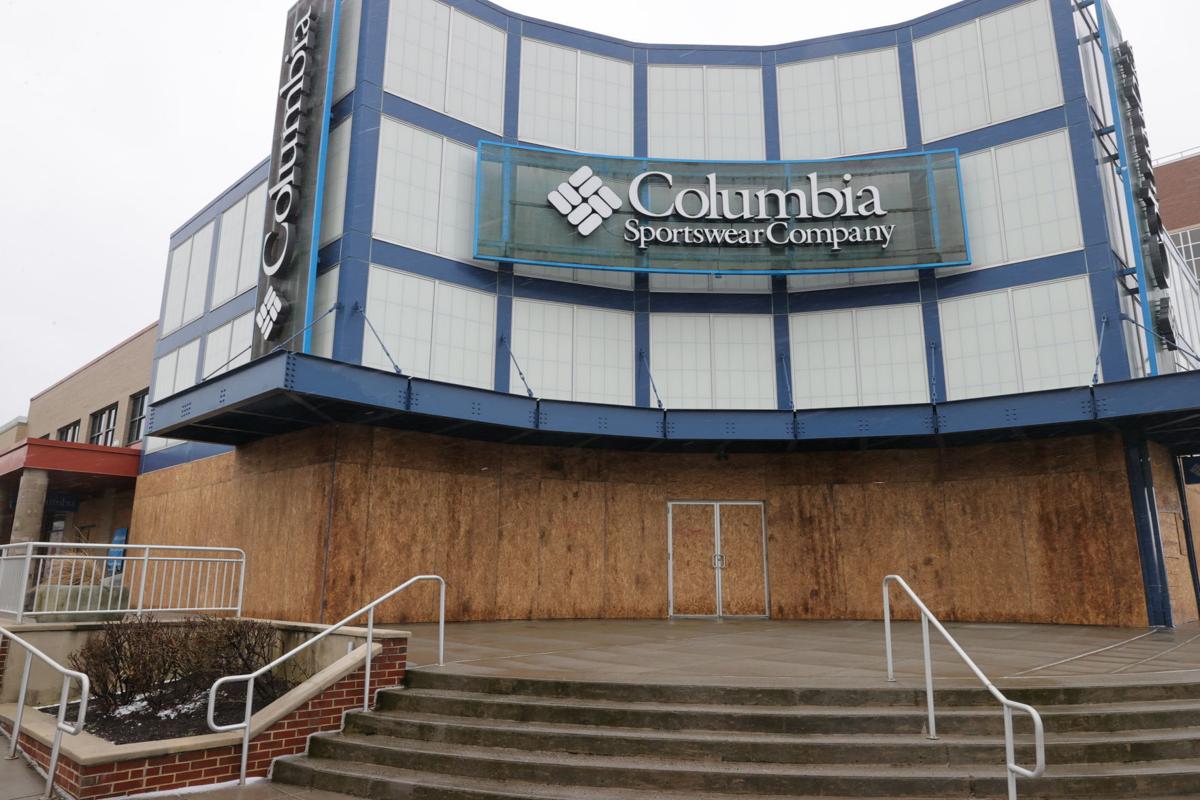 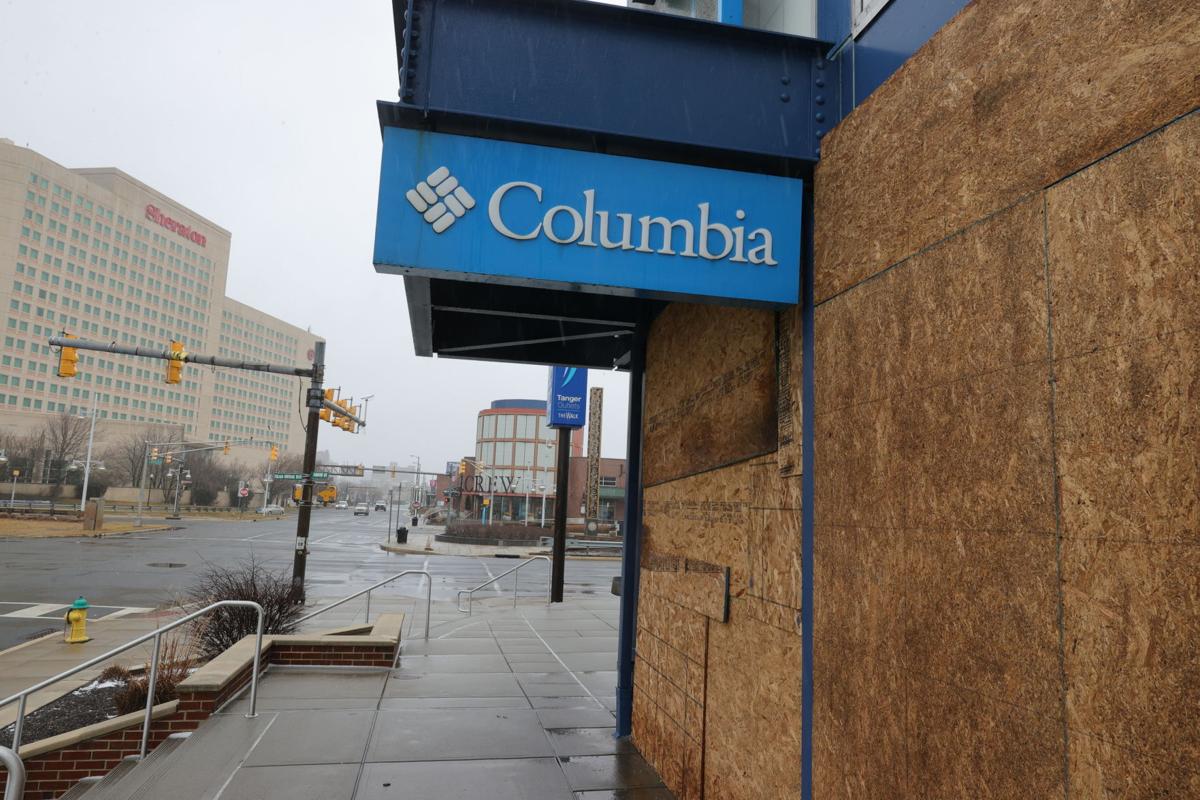 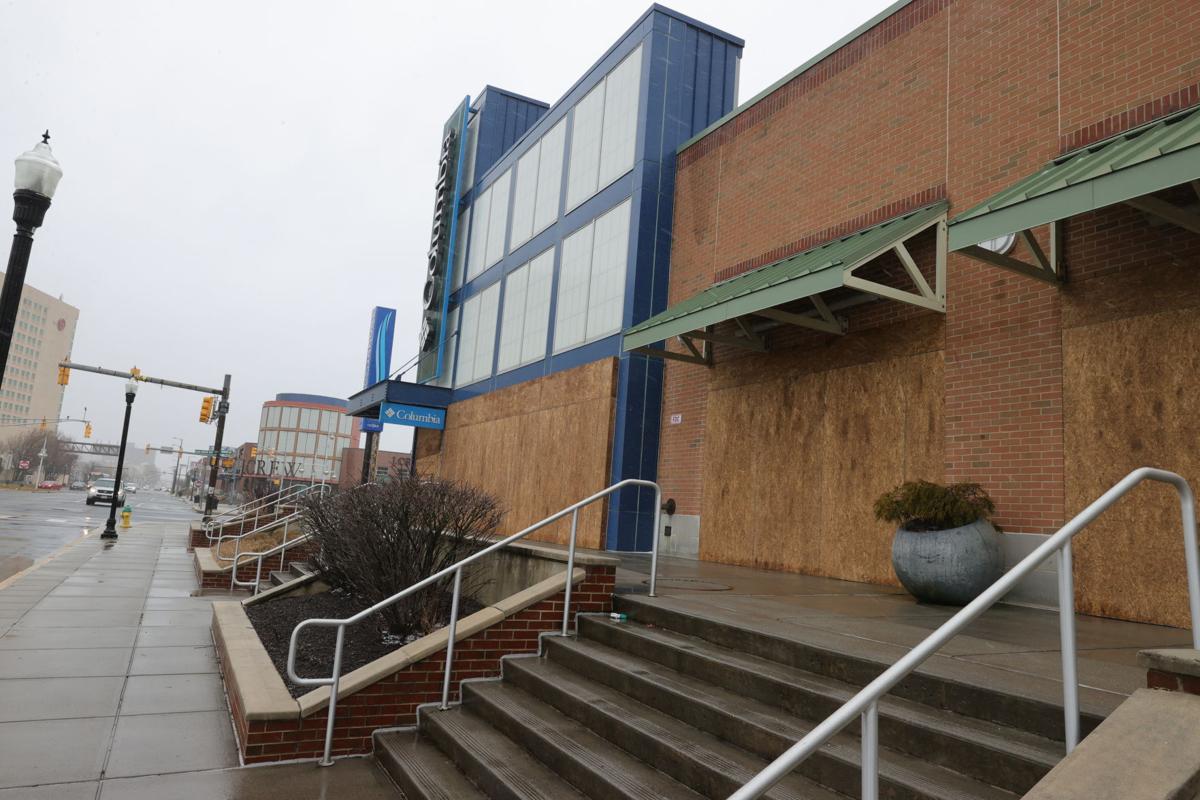 The Columbia Sportswear store at Tanger Outlets The Walk in Atlantic City has been boarded up since December, following a series of break-ins. 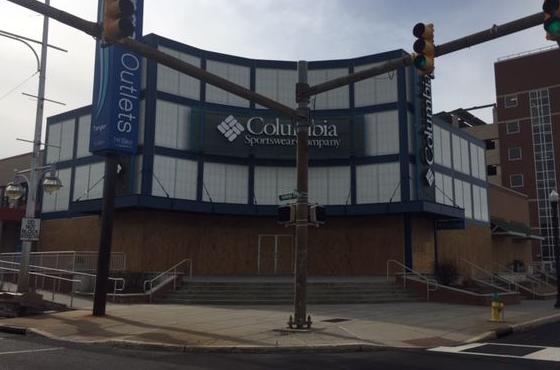 The Columbia Sportswear store at Tanger Outlets The Walk has remained boarded up for weeks. City officials are not happy about it.

ATLANTIC CITY — The former Trump Plaza casino that has been an eyesore for years will be demolished this month, but a smaller eyesore also greets visitors as they enter the resort via the Atlantic City Expressway.

The Columbia Sportswear store at Tanger Outlets The Walk has its windows completely boarded up even as it remains open for business, as a theft prevention measure.

“Thieves broke into the store three times in four weeks. Each time, city government response was sluggish and did not give us confidence that it was willing to take measures to keep businesses and shoppers safe,” a Columbia Sportswear corporate spokesperson said Tuesday. “We had to take precautionary measures to protect ourselves from further criminal activity.”

The building’s appearance has angered city officials, who say it is harming the city’s image and putting staff and customers at further risk.

“It looks bad in addition to being a public safety hazard,” Councilman Kaleem Shabazz said at the Jan. 27 council meeting. “And right as you come into the city — that’s crazy.”

The Columbia store is one of the first buildings visitors see as they arrive in the city via Christopher Columbus Boulevard.

Some Atlantic City businesses board up windows ahead of election day, law enforcement monitor for unrest

“We repaired the glass each time,” she said.

The spokesperson also said Columbia would “welcome any suggestions from political leaders as to how they could assist us in protecting the property.”

News reports from around the nation have described how Columbia stores have been looted, damaged, boarded up and closed either permanently or temporarily due to rioting in cities like Portland and Seattle. The Seattle outlet store remained boarded up after a May 30 looting, and in September it closed permanently.

While some stores at The Walk were damaged by looters May 31 in riots after a Black Lives Matter protest in Atlantic City, the Columbia store was not among them, according to police.

Like most retail stores, business for the chain has been down during the COVID-19 pandemic, according to national business reports. In the third quarter last year, Columbia reported net sales decreased 23% to $701.1 million compared to the same quarter of 2019 and announced the closure of some stores nationwide.

Two arrested in burglary at The Walk in Atlantic City

“We are working with them,” Walk manager Donna Danielson said when asked if her organization, as the property owner, has the right to remove the plywood.

Many stores at The Walk, elsewhere in the city and the nation boarded up right before the November elections, in case of rioting due to high political tensions. But when rioting didn’t occur, they removed the boards.

Council President George Tibbitt said a couple of other stores have small areas of boarded windows covering window breaks, but no other store has gone as far as Columbia.

He is working with the city’s legal department and other employees to craft an ordinance to prevent stores from boarding up as a theft deterrent, he said.

He also believes Tanger Outlets, as the property owner, should be fined, he said Monday.

“For convenience stores, the law says how much window can be covered. When the cops drive by, they have got to be able to see in,” Tibbitt said. “This is completely covered. I’m not buying The Walk isn’t responsible. It’s their building.”

Police reports for The Walk over the past few months show there has been some window smashing and thefts, Tibbitt said.

“They break the little window at the bottom and crawl in,” he said.

But there has to be a better way to deal with the problem than boarding up the entire store, Tibbitt said.

ATLANTIC CITY — Officers on Tuesday talked a city woman out of killing a store clerk during an attempted robbery, police said Wednesday.

As both a police officer and a Black man, Henry White found himself feeling conflicted when he considered the Black Lives Matter protests that…

ATLANTIC CITY — Keeping people safe during the implosion of the former Trump Plaza casino Feb. 17 will require closing only a small area of th…

ATLANTIC CITY — Anthony and Carrie Ariemma are excited to see the former Trump Plaza be demolished.

ATLANTIC CITY — The implosion of the 39-story Trump Plaza casino tower went off at 9:08 a.m., just a few minutes later than scheduled Wednesda…

The Walk in talks to provide police substation, get Columbia windows open

ATLANTIC CITY — Tanger Outlets The Walk is in talks with the city to provide a police substation on site, to help police better protect the ar…

GALLERY: Businesses at Tanger Outlets The Walk boarded up ahead of Election Day 2020

A spokesperson for Columbia Sportswear says the company’s Atlantic City outlet store was broken into three times in November and December.

The Columbia Sportswear store at Tanger Outlets The Walk in Atlantic City has been boarded up since the fall.

The Columbia Sportswear store at Tanger Outlets The Walk in Atlantic City has been boarded up since December, following a series of break-ins.

The Columbia Sportswear store at Tanger Outlets The Walk has remained boarded up for weeks. City officials are not happy about it.