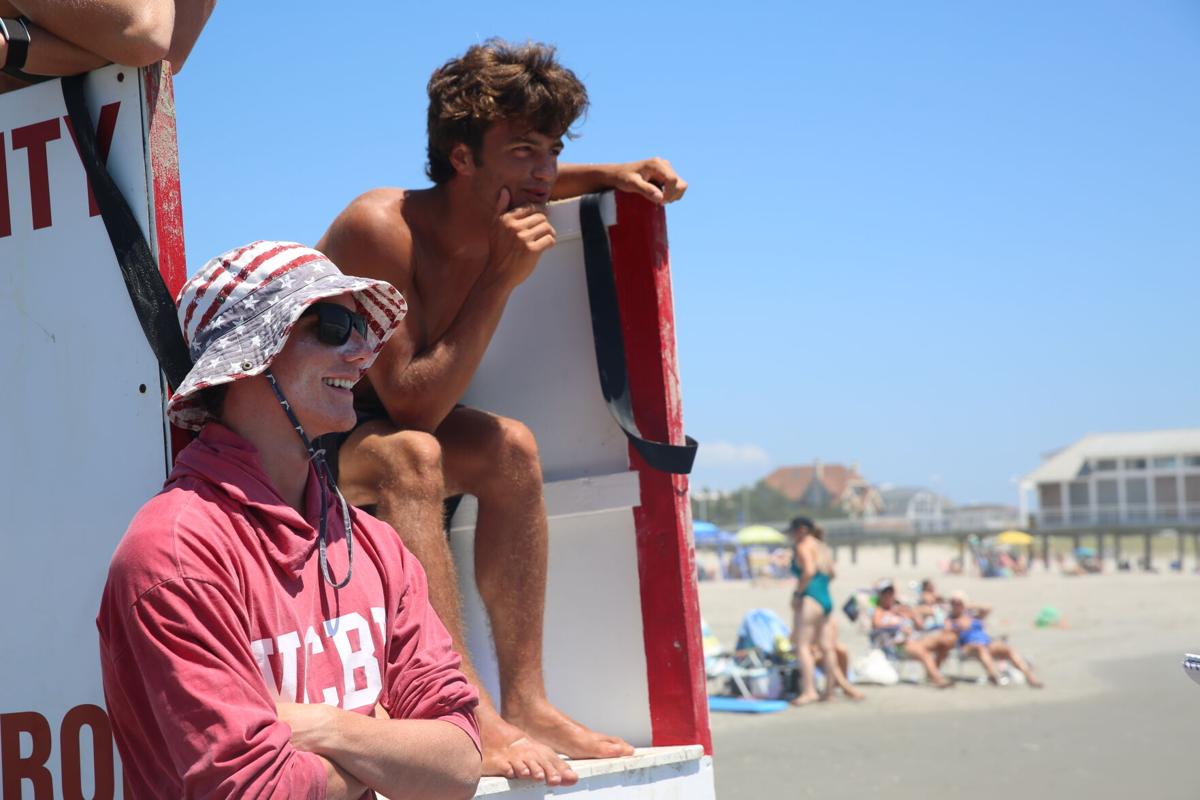 Ventnor lifeguards Tyler Wimberg, left, and Mike Mosca do what they can to beat the heat Tuesday. 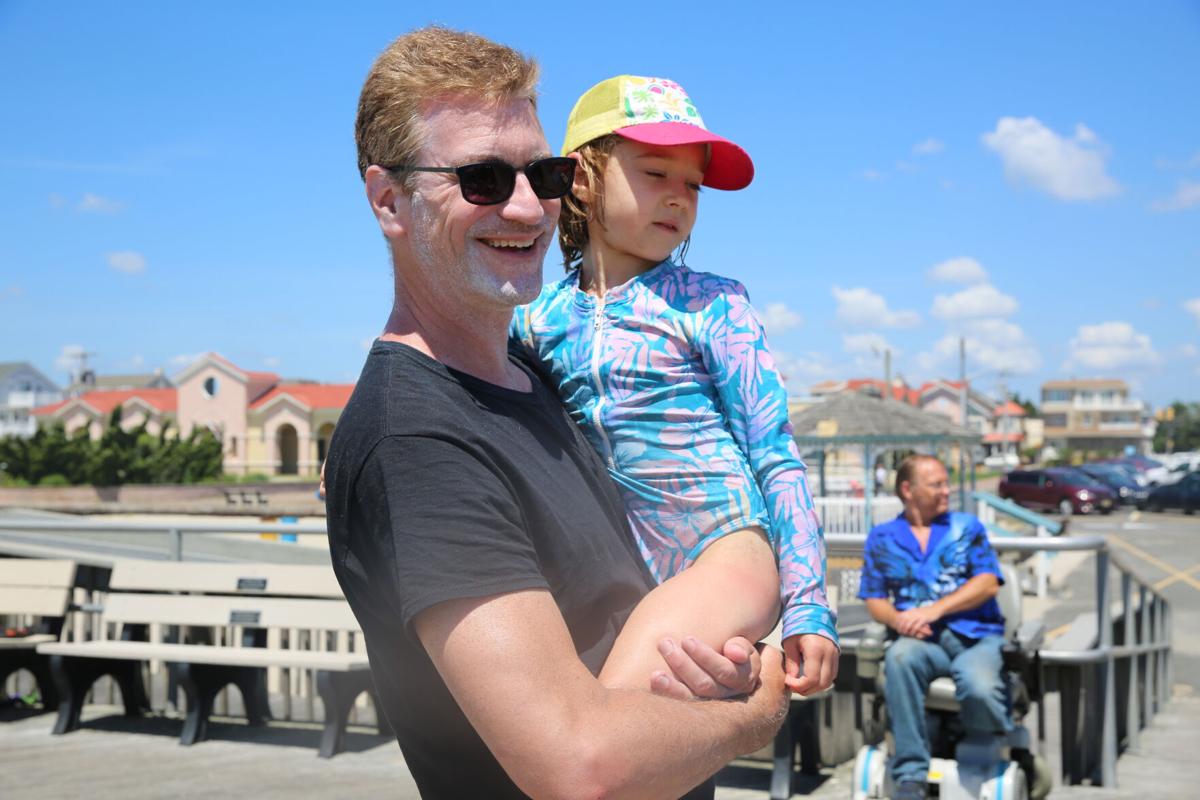 Clayton Fletcher and his daughter Antonella made the trek from New York City to Ventnor to avoid the sweltering forecast Tuesday. 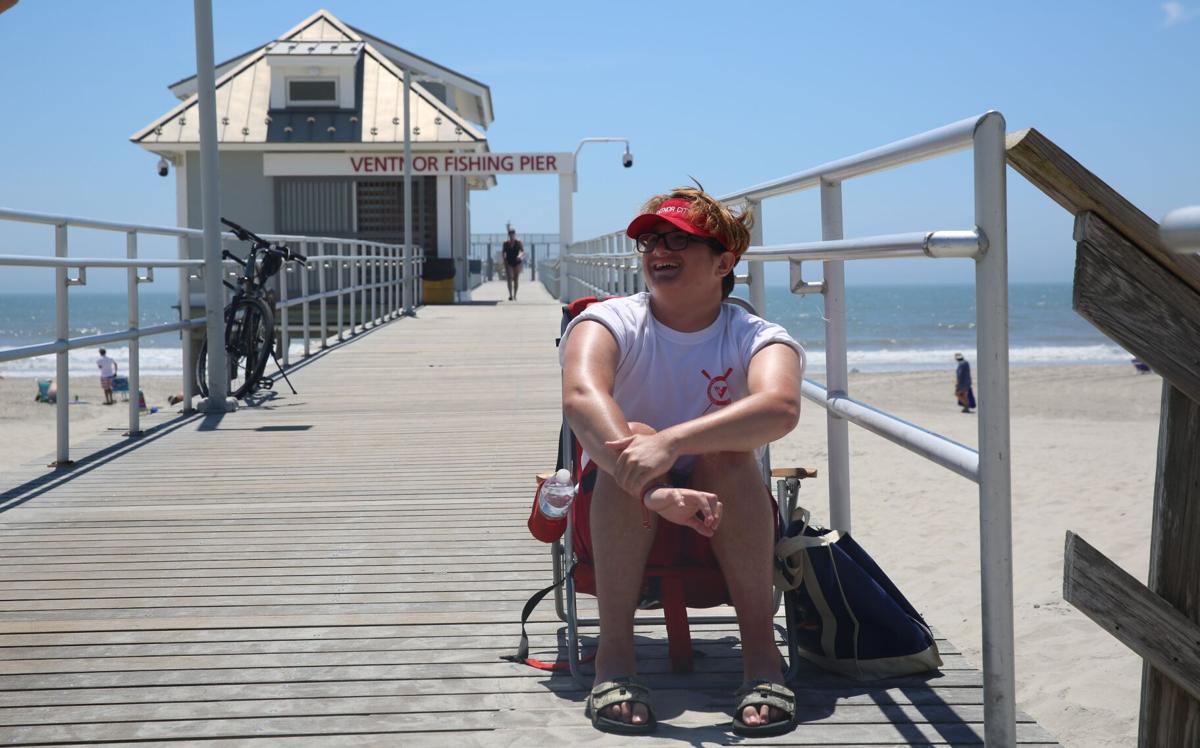 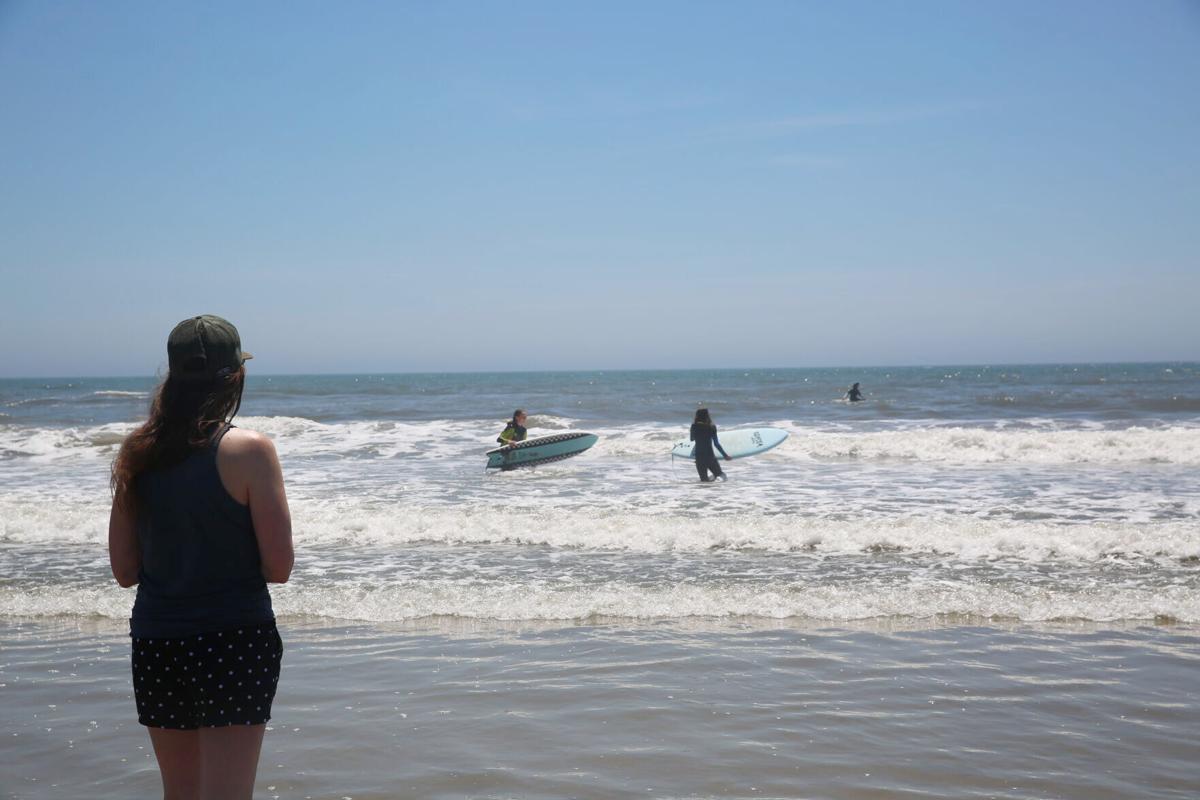 As temperatures continued to soar across New Jersey, people converged on the beaches in Ventnor and Atlantic City on Tuesday, where a sea breeze made things more palatable.

As temperatures scorched New Jersey and much of the East Coast on Tuesday afternoon, people converged on beaches in Ventnor and Atlantic City, trying to beat the heat.

Through the haze that formed along the shore, brightly colored umbrellas and towels could be seen for miles, with groups of residents and tourists alike enjoying cold beverages and ice cream.

“Everyone wants to be at the beach,” said Alex Sarkar, 16, who was checking beach badges on the Ventnor Fishing Pier. “That’s when we get the most people, when there’s a heat wave.”

While an unprecedented heat wave in the Northwest slammed cities like Seattle and Portland, Oregon, the Northeast was entering its second heat wave of the month.

Tuesday’s high temperature reached 93 degrees at Atlantic City International Airport. However, the heat didn’t tell the whole story, as dew points around or above 70 for most of the day made it feel closer to 100 during the afternoon. On average, Atlantic City International experiences 19.6 hours of a heat index over the century mark each year, according to the Iowa Environmental Mesonet.

Sarkar said he was staying cool during his shift by keeping an ice cold bottle of water nearby at all times.

Clayton Fletcher and his daughter, Antonella, made the trek from New York City to avoid the sweltering forecast.

“I saw the weather was going to be 92 (degrees) in the city,” Clayton said. “Thank God it was cooler here.”

The beach offered relief in the form of a cooling sea breeze, the chillier onshore winds that blow onto land when there is a large difference in sea and inland surface temperatures. Sen. Frank S. Farley State Marina in Atlantic City only reached 80 degrees Monday and 82 degrees Tuesday. West Cape May had a high of 83 degrees Tuesday, according to the Rutgers New Jersey Weather Network.

And while it may have been cooler by the ocean, slightly, the mainland continues to be in the midst of its second heat wave of June, and the year. A heat wave — three days of high temperatures above 90 degrees — was expected to be reached Wednesday, with mainland highs again in the mid-90s and a heat index in the low 100s.

Ben Parman, 33, was visiting Atlantic City from Phoenix and said the heat was nothing extreme but the humidity was taking a toll on him.

“I’m used to standing outside and golfing in 115-degree weather,” Parman said. “But as soon as it gets humid, I’m done.”

For Rob Boselli, a roofer working on a house on the Ventnor Boardwalk, working near the ocean provided some much-needed relief.

However, the shore was expected to heat up more Wednesday, as an offshore wind pushes the beach relief away. Highs around 90 are expected, with a heat index close to 100.

“It’s hotter up on the roof, but we’re getting a nice breeze off the ocean,” Boselli said. “If we do copper work, then it gets a lot hotter because the metal attracts the heat.”

The high heat and humidity didn’t relent much at night. The two warmest nights of the year so far occurred Sunday night and Monday night at the airport, with lows of 72 and 73 degrees, respectively. The marina had lows of 72 degrees both nights.

In southeastern New Jersey, Ocean County was in a heat advisory through 8 p.m. Wednesday. Cumberland, Cape May and Atlantic counties were not in the advisory, not because it was cooler, but because the National Weather Service sets a higher standard to reach the heat alert criteria.

Press Staff Meteorologist Joe Martucci and The Associated Press contributed to this report.

The second heat wave of the month will continue Tuesday. Both heat and dew points will be higher, making it the most oppressive of the week. Independence Day weekend will cool down, but that comes at the risk of storms and possibly a day with a washout.

MARGATE — Carnell Davis, a Rutgers University football player from Galloway Township, was injured in the city during a fight that was captured…

Ventnor lifeguards Tyler Wimberg, left, and Mike Mosca do what they can to beat the heat Tuesday.

Clayton Fletcher and his daughter Antonella made the trek from New York City to Ventnor to avoid the sweltering forecast Tuesday.

As temperatures continued to soar across New Jersey, people converged on the beaches in Ventnor and Atlantic City on Tuesday, where a sea breeze made things more palatable.