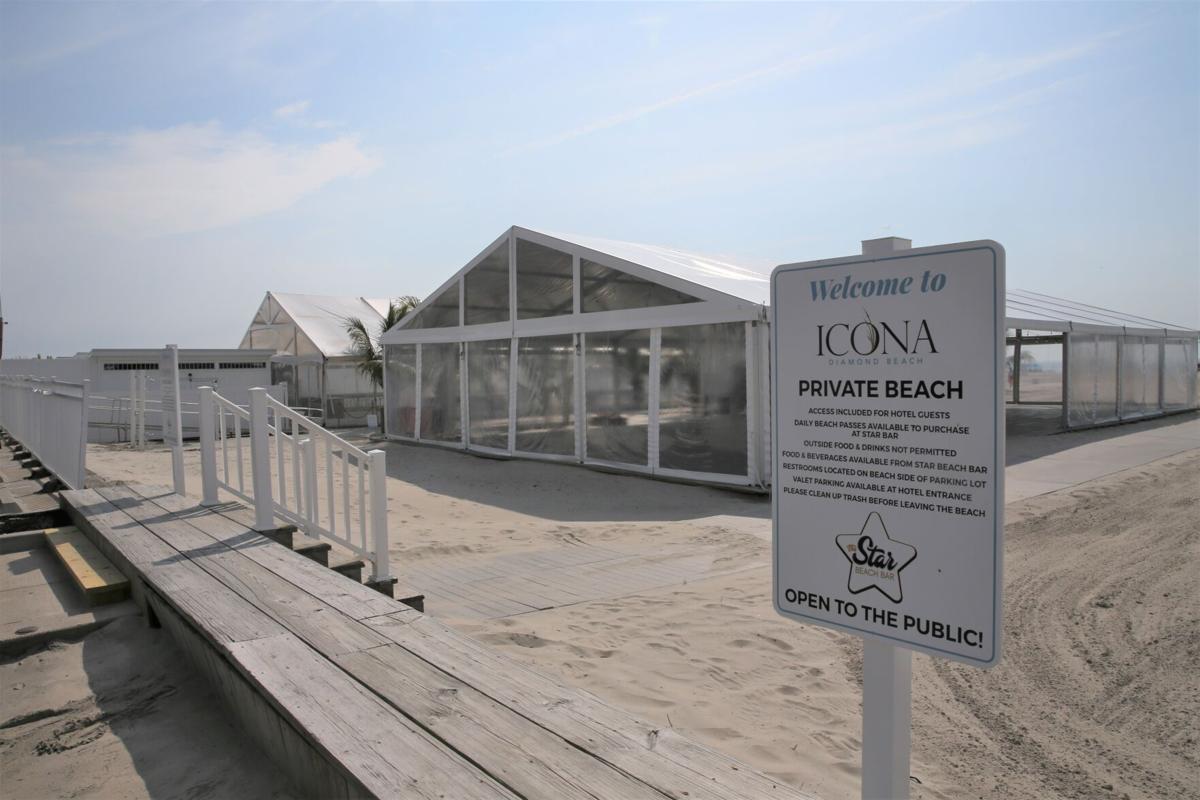 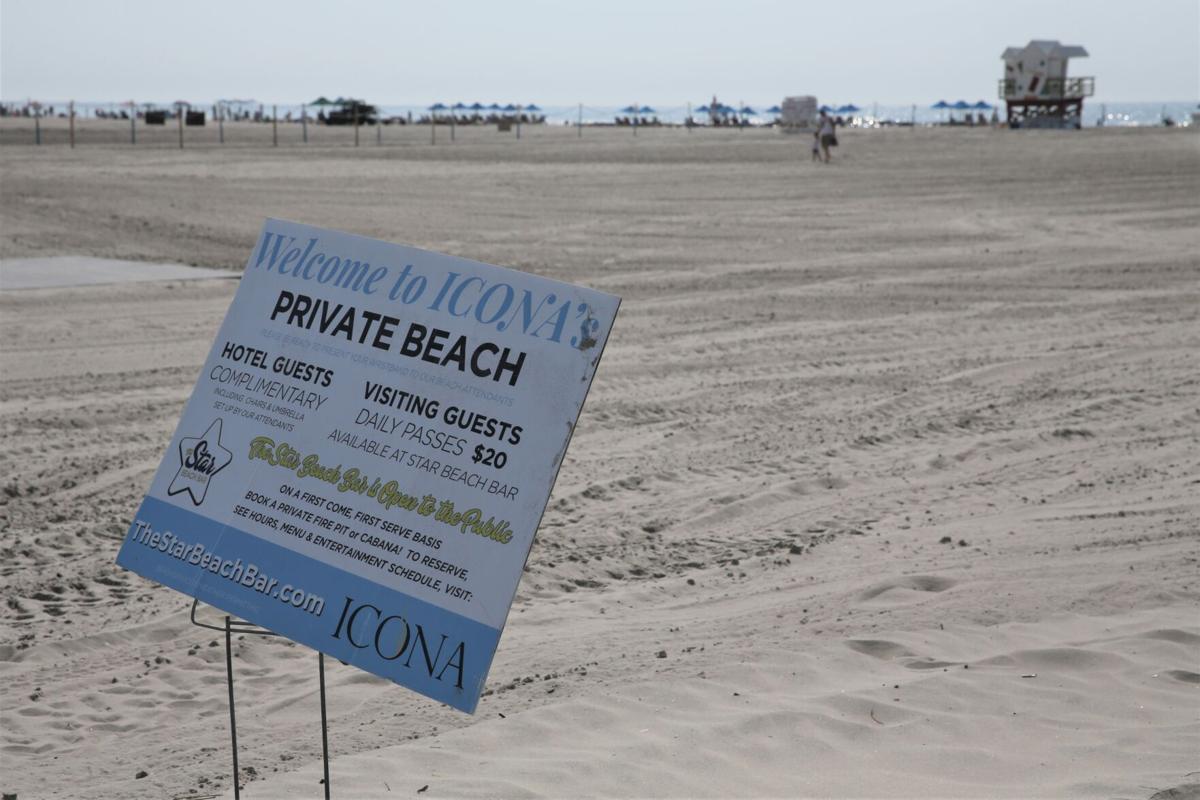 At The Icona, one of several private beaches in the Diamond Beach section of Lower Township, there is little indication that people have a right to cross the private sections on the beach to reach the water, under the public trust doctrine. 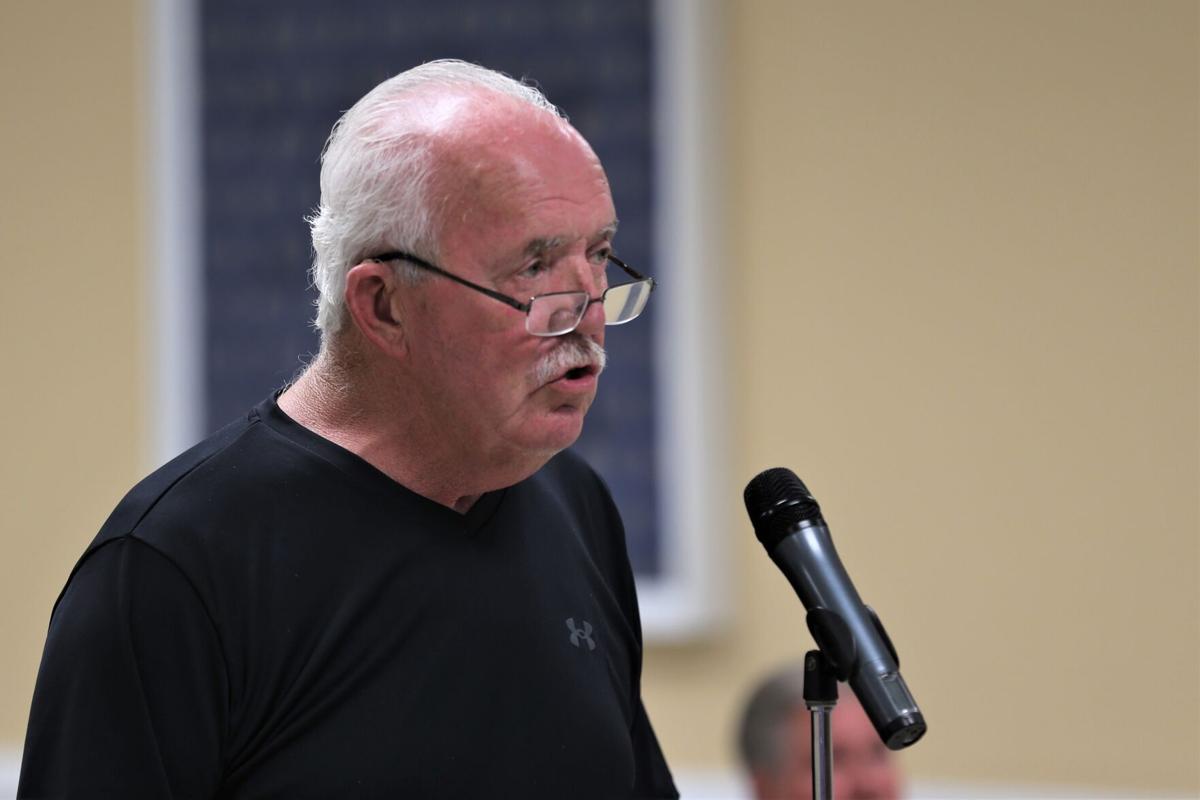 Diamond Beach resident James Sanford makes a point at a recent Lower Township Council meeting. Some residents of the beachfront community are frustrated about beach access, drainage issues and other matters.

LOWER TOWNSHIP — A new fight is brewing this summer over a line in the sand in the township’s Diamond Beach section, a blink-and-you-miss-it few blocks adjacent to Wildwood Crest.

The core question goes back decades.

At issue is what area on the wide beach is accessible to the public, and where the private beach clubs in the area have the right to keep the public out. The latest volley came over July 4 weekend, when police were called to the beach in front of the Icona beach resort on Rochester Avenue.

Diamond Beach resident James Sanford described the event to Township Committee last Tuesday. A member of the private beach club got into an argument with a woman who tried to set up a blanket on the beach club’s section of the sand.

Accounts vary and it is uncertain if the woman was able to stay or had to move to the public strand. Police said there were no charges filed in connection to the incident.

Still, Lower Township appears to be taking the matter seriously, with code enforcement officials meeting with the property manager to go over the rules governing beach access.

“I really think a lot of the issue was just miscommunication,” said Lower Township Mayor Frank Sippel. On Friday, he said he believes that if everyone understood the rules, conflict would be less likely.

The thing is, the rules are a little complicated, and unfamiliar to many beachgoers.

There are few private beaches along the ocean in South Jersey. In Diamond Beach, the beachfront runs a little over 3/10ths of a mile, most of which is owned privately and operated as beach clubs, with use restricted to members, guests of the individual properties or others — someone buying a beverage at one of the beach bars, for example.

But under what’s known as the public trust doctrine, members of the public have a right to access to the beach where tidal waters flow.

“It’s an ancient common law doctrine. I believe it goes all the way back to the Romans,” said Frank Corrado, an attorney representing Icona owner Eustice Mita.

According to background on the doctrine posted by the New Jersey Department of Environmental Protection, it goes back to Emperor Justinian around the year 500. From there, it entered English Common Law and was adopted in the 13 colonies.

In New Jersey, the ownership of tidal lands was held by the king, which passed to the public in the American Revolution. All that boils down to the principle that people have a right to access to the ocean, and private landowners cannot legally keep them out.

“They only own to the high tide line of the beach. Anything beyond that is public,” said Sippel.

The fight in Diamond Beach does not go back centuries, but is nothing new, either. In 2002, one person was charged with trespassing at a protest at a private beach club. After that, a group of neighbors filed a lawsuit over beach access.

Today, the beach owners do not dispute the right of public access.

“The privately owned beach at Icona complies fully with the public trust doctrine,” Corrado said. That includes providing a pathway to the wet sand portion of the beach across the private area, and a narrow section along the ocean where residents can set their beach chairs and blankets.

But there is not always very much room on that section.

“When it’s high tide, it’s a problem,” said Michael Laffey, who was hired this year as the Lower Township manager.

In the summer of 2005, New Jersey’s Supreme Court upheld the public trust doctrine in connection to another private beach in Diamond Beach.

Several people interviewed for this story said the issue comes up every few years.

According to Sippel, occasional misunderstandings arise when the beach clubs hire new people, someone moves in to the neighborhood or someone visits Diamond Beach for the first time. Further complicating the issue, nearby Wildwood Crest does not require any beach tags, nor do Wildwood or North Wildwood on the same barrier island.

On the other side of Diamond Beach, the Two Mile Beach Unit of the Cape May National Wildlife Refuge allows free public access to a network of trails, but prohibits any beach access in the summer for the sake of beach nesting birds.

Plus, some neighboring private beaches have negotiated with the state to allow an additional 50 feet of public beach between the high water line and the dry sand.

According to Sanford, there was another argument on a recent weekend between a local beachgoer and an Icona staff member over whether he and a friend were allowed to walk through the private beach to reach the water. It culminated in threats of calling the police, but neither side made the call.

Vanaman is heading up the police response to the issue. He said the police have been in contact with the township solicitor and the state DEP to make sure officers understood what’s allowed and what is not. Police are working to protect the rights of property owners and the rights of people to hit the beach in the summer, he said.

“We’re trying to be reasonable to both sides,” he said.

At the July 6 Township Council meeting, residents of Diamond Beach and Wildwood Crest raised the issue of beach access, along with multiple other concerns relating to drainage, public safety and continued development in the small beachfront section of the township.

Sanford complained of construction work at Icona, where an additional floor is being added, and difficulty parking because of events at the private beach. He also raised issues with emergency response. The township has recently approved a contract with Inspira to provide ambulance response in the township, with plans to station an ambulance in the community during the summer.

This year, Sanford helped reinstate the long-dormant Diamond Beach Citizens Action Group, of which he now serves as president.

Other speakers at the Tuesday meeting said the township likes the revenue from the beachfront ratables in the small community at Diamond Beach but does little to address the concerns of residents. According to Sanford, the section has about 200 year-round residents and close to 1,000 residential units, sending millions a year in taxes to the township and seeing little in return.

“Diamond Beach, to Lower Township, is nothing but a cash cow,” Sanford said Friday.

Later that day, Sippel said the township has tried to address all of the residents’ concerns, including beach access and ambulance series.

“Diamond Beach is one of 10 sections of the township,” Sippel said. Each section has its own history, needs and priorities. For Diamond Beach, he said, many of the concerns about density and development should be addressed to the Planning Board, which by law is independent from the Township Council.

He, too, sad the township wants to find a solution on public access that satisfies everyone.

“The goal is to have all parties come up with a common ground here,” Sippel said.

This human skull was mysteriously found in an Italian cave

This human skull was mysteriously found in an Italian cave

Beirut explosion: 'There are lots of patients suffering from anxiety, depression and PTSD'

Beirut explosion: 'There are lots of patients suffering from anxiety, depression and PTSD'

Will Canadians return to the beach this year? That depends on whether the border reopens.

For decades, at least for a couple of weeks a year, Cape May County has had a bit of a French accent, with travelers from Quebec making up a n…

WASHINGTON — A mysterious ailment has sickened and killed thousands of songbirds in several mid-Atlantic states since late spring. While scien…

Beach access is still a battle in South Jersey

It’s a constant battle for Cape May County surf fisherman Robert Jackson to gain access to the salt water to pursue his favorite pastime.

Icona Resorts has acquired yet another hotel in Cape May County.

At The Icona, one of several private beaches in the Diamond Beach section of Lower Township, there is little indication that people have a right to cross the private sections on the beach to reach the water, under the public trust doctrine.

Diamond Beach resident James Sanford makes a point at a recent Lower Township Council meeting. Some residents of the beachfront community are frustrated about beach access, drainage issues and other matters.