This photo from a drone shows the banner plane piloted by Landon Lucas after it landed on the Ocean City causeway Monday afternoon. 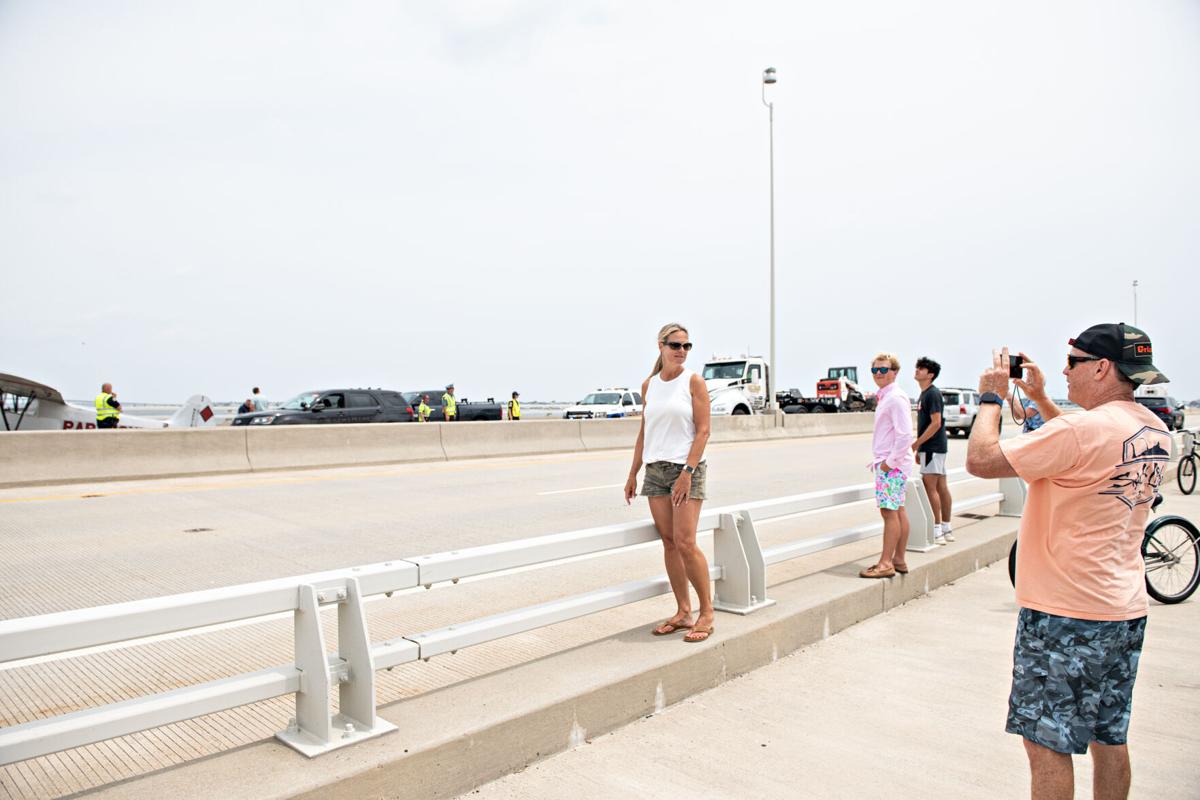 Several people walking across the bridge stopped to see the plane. Kristina Capone has her photo taken by Sean Barnes, both of Ocean City, with the plane as her backdrop. 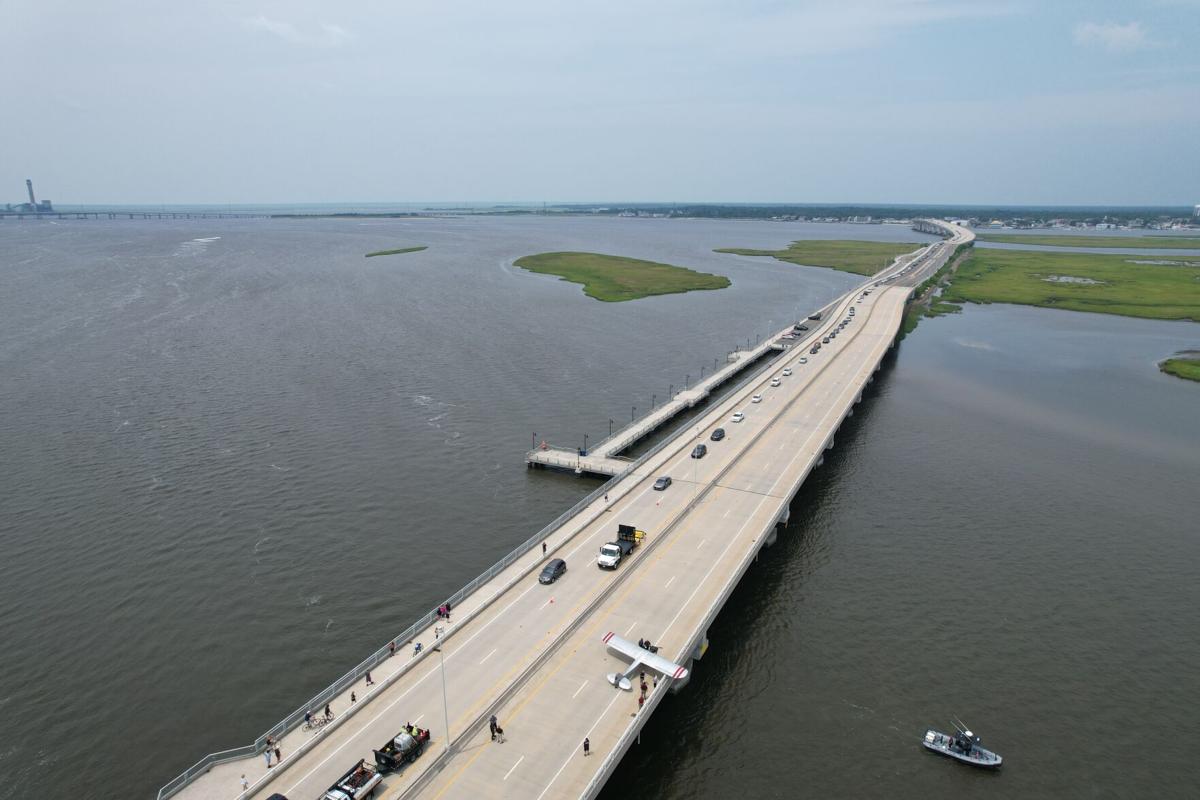 He did not make it, instead touching down on the westbound lanes of the Route 52 causeway connecting Ocean City and Somers Point.

“The pilot successfully landed with no damage to the plane and no injury to himself or any motorist,” according to a release from Ocean City spokesman Doug Bergen. “Investigators are on the scene, and crews are working to remove the wings and tow the plane away.”

Lucas told Ocean City officials that his plane began experiencing engine trouble as he was flying near the Steel Pier in Atlantic City. He released the banner he was towing over the ocean and tried to make his way to the airport in Ocean City.

Police and fire crews responded when the call came in at 12:38 p.m. Monday.

Immediately following the landing, traffic was snarled heading out of Ocean City with lanes from Ocean City to Somers Point closed.

Later in the afternoon, Bergen said one lane of traffic was open heading out of Ocean City, and both lanes heading in had been reopened. But at one point, there was at least one car accident as drivers looked at the plane.

Rose Savastano, who works at the Ocean City Welcome Center near where the plane landed, said she could see the pilot standing by the plane soon after the landing.

“He did a perfect landing,” she said from the scene. “He’s fine.”

She said it was a banner plane from Paramount Air Services. The name is visible on the side of the plane.

The woman who answered the phone at the Middle Township-based aerial advertising agency confirmed that it was one of the company’s planes, but had no further information or comment.

“We don’t know all the circumstances, and there’s no comment at this time,” she said. She did not give her name.

People in Ocean City had reported earlier hearing a large number of sirens downtown as responders headed to the scene.

Michele Gillian, the executive director of the Ocean City Regional Chamber of Commerce and the wife of Mayor Jay Gillian, said she left the Welcome Center earlier on an errand a little before the plane landed, and heard the sirens while downtown.

When contacted, she was trying to return to the Welcome Center, but said traffic heading out of Ocean City on the Ocean City-Longport bridge was heavily backed up.

Images from the scene show the silver plane with red markings facing toward Somers Point, with one wind hanging over a guard rail close to the water.

Most accidents involving banner planes take place in one of three circumstances: the maneuver to pick up the banner, entangled or snarled banner towlines, or due to the loss of engine power, according to a 2003 report from the FAA.

There have been several banner plane crashes in the region, including some in which the plane has hit the water.

Last year, a banner plane crashed into the water off Surf City on Long Beach Island. Lifeguards on the beach pulled the pilot ashore after the Cessna 150 went down in front of a beach full of people on a Saturday afternoon on June 27.

It was one of a number of banner plane incidents in recent years.

In 2012, a Paramount Air banner plane crashed into a tree in Middle Township, and in 2015, a banner plane went down in the marsh near the Delaware Bay near Reed’s Beach, with the plane flipping over. The pilot survived in each instance.

In July of 2008, another banner plane ran out of fuel and crashed into a fence in the backyard of a motel in Middle Township.

In Ocean City, a Paramount Air plane went down in the marsh near 51st Street in 2010. The pilot was not seriously injured in that incident, either.

View more photos from the banner plane that made an emergency landing on the Ocean City Causeway at PressofAC.com.

Landon Lucas, 18, stood next to the 1946 airplane that had failed him two days earlier, leading to his unlikely and eye-popping landing on the…

This photo from a drone shows the banner plane piloted by Landon Lucas after it landed on the Ocean City causeway Monday afternoon.

Several people walking across the bridge stopped to see the plane. Kristina Capone has her photo taken by Sean Barnes, both of Ocean City, with the plane as her backdrop.