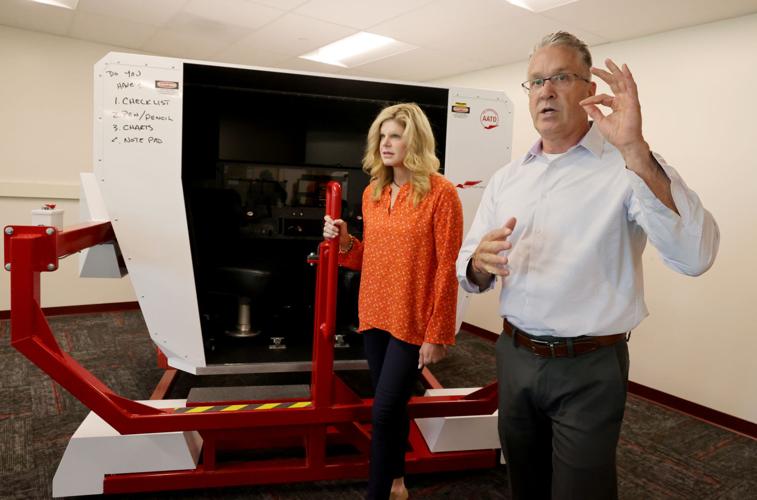 Lauren Moore, right, president of the Atlantic County Economic Alliance, and Brett Harrison Matik, alliance chair, say their goal is to diversify the area’s economy so when disaster strikes, it won’t cripple the region. 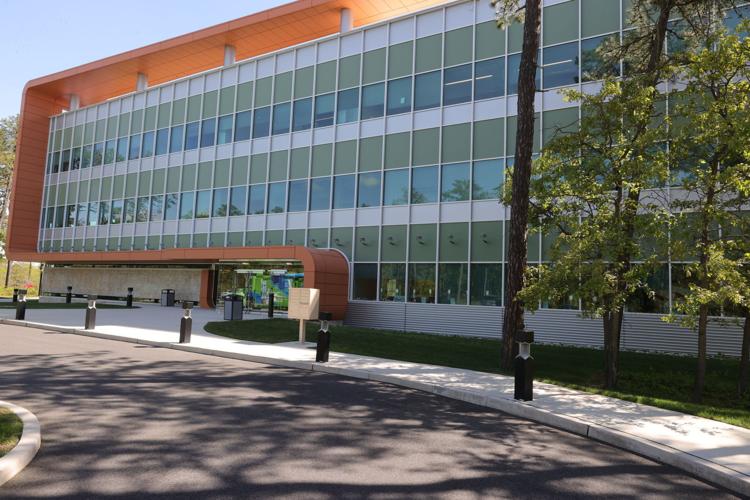 The first building of the National Aviation Research and Technology Park on the grounds of the William J. Hughes Technical Center in Egg Harbor Township is up and running, and plans are to break ground on building No. 2 later this year. 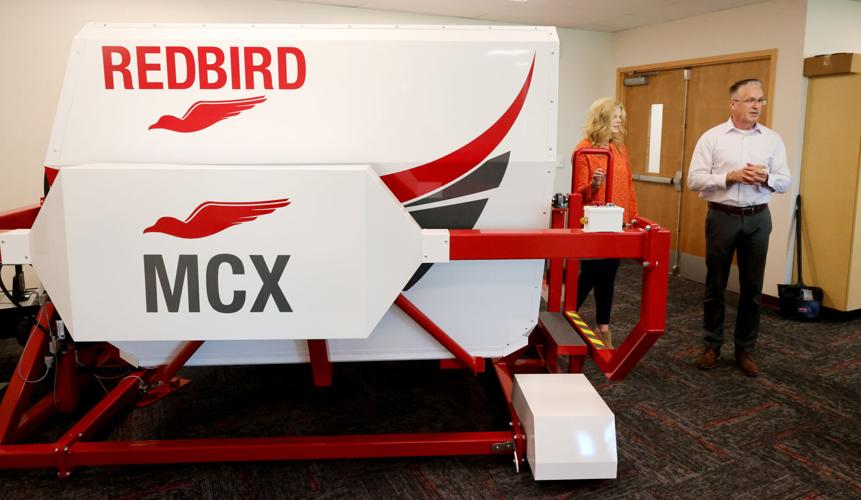 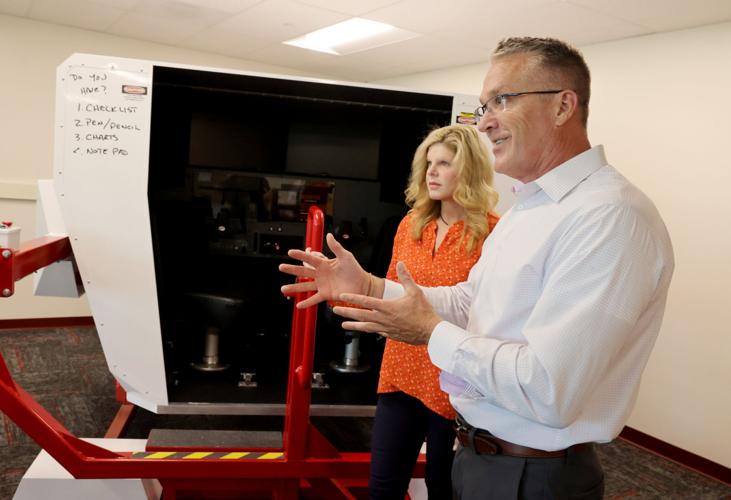 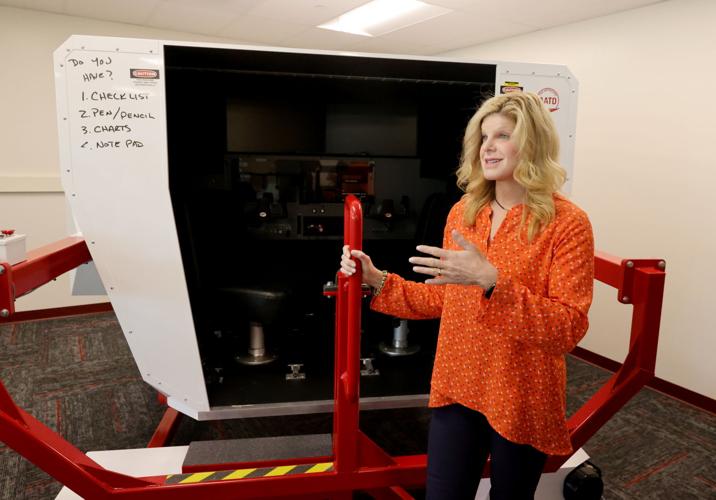 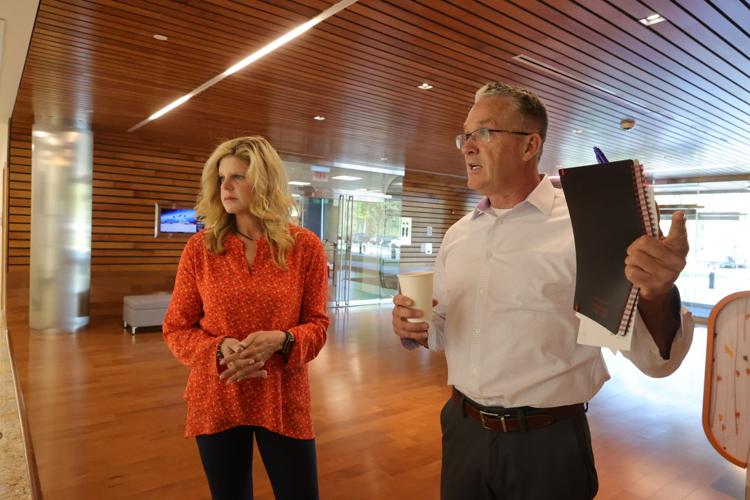 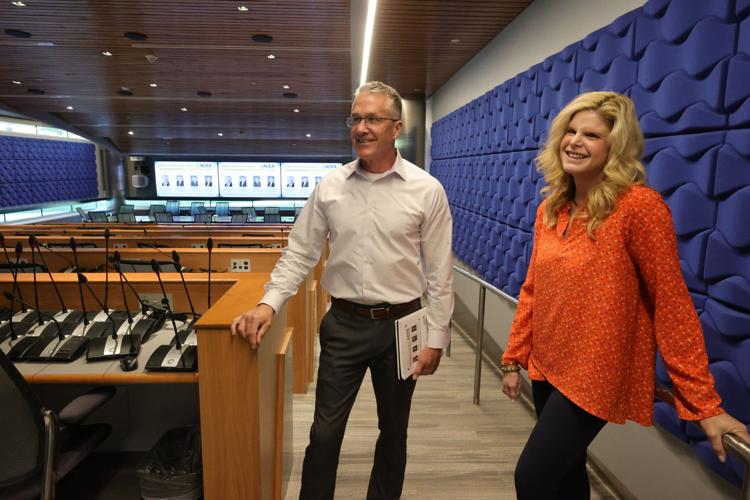 When the COVID-19 pandemic hit, Atlantic County lost 40% of its economy, due in large part to the county being 60% dependent on travel, tourism and leisure, according to a report published by the Atlantic County Economic Alliance.

“When the pandemic hit and nine casinos shut, nobody was allowed to go to restaurants and all the service industries got clobbered as a result of that … we were the hardest hit county (in the country),” said Lauren Moore, president of the alliance. “While that was very bad, it really put a spotlight on why it’s important for us to diversify our economy.”

Implemented in 2017, the ACEA is a private-sector directed, nonprofit economic development corporation whose mission is to attract and retain businesses and industries that will help workforce development and economic diversification.

Its main goal: to attract different businesses and industries to the county that offer high-paying jobs and to work with educational institutions to offer curricula catered to those industries.

“It’s about bringing education and qualified people to the area for high-paying, high-quality jobs,” she said. “If we have people making minimum wage, they’re feeding their family. If we bring in someone who’s making $50,000 to $150,000 a year, they’re hiring a landscaper, they’re hiring a painter, you’re going to go to dinner maybe one more time a month, the wife is going to the salon versus doing her hair herself.”

One large step toward diversification is in the aviation sector. In 2019, the first building in the National Aviation Research and Technology Park opened in Egg Harbor Township. Plans to break ground on the second building are scheduled for later this year, with an anticipated opening date of early 2023.

“It was natural to diversify into aviation,” Matik said. “Having the tech park here and the FAA, we’re creating workforce development, we’re bringing jobs in the area and we’re raising the bar … making people want to come to South Jersey for aviation.”

And with more aviation comes aviation training. On Thursday, about a dozen high school students from the Atlantic County Institute of Technology were on site at the NARTP immersed in a class about aviation.

ACIT started holding classes in the building in 2019 through a partnership with Embry-Riddle Aeronautical University in Daytona Beach, Florida.

ACIT is teaching Embry-Riddle credited courses to the high school students, Matik said. Those credits can transfer to a college or university, or the students can get a certificate for the credits completed and go right into the workforce.

Also in the works is a plan for the ACEA to add a training academy for maintenance, repair and overhaul operations. It’s partnered with Embry-Riddle and Atlantic Cape to work on the new project, which would be onsite at the airport, Moore said.

“We can build a training academy that gives all of these companies what they need,” Matik said. “It’s not just work on an airplane … it could be wind turbines. That technology can be transferred to different areas, not just aviation.

“If we have a trained workforce here, and now we have companies who’ve moved to the area, they’re going to need employees,” she added. “We’re working so hard to attract these companies to this area so we can keep those kids here and give them a job.”

The ACEA had the maintenance and training academy already designed for standard aircraft, and then the pandemic hit and nobody was flying, Moore said.

NASA touches down in Atlantic County, collaborates with FAA

But the ACEA isn’t focused solely on aviation. Other industries it’s working to attract include offshore wind, distribution logistics and manufacturing.

That translates to more housing, hospitality and lodging. Moore said soon ground will be broken for an 111-room hotel by the airport near Westcoat Road.

And it’s all done through ACEA partnerships crossing with other partners to help each other in a tangled web of economic development.

EGG HARBOR TOWNSHIP — The use of drones could revolutionize the way New Jersey responds to natural disasters, according to some officials and …

Lauren Moore, right, president of the Atlantic County Economic Alliance, and Brett Harrison Matik, alliance chair, say their goal is to diversify the area’s economy so when disaster strikes, it won’t cripple the region.

The first building of the National Aviation Research and Technology Park on the grounds of the William J. Hughes Technical Center in Egg Harbor Township is up and running, and plans are to break ground on building No. 2 later this year.