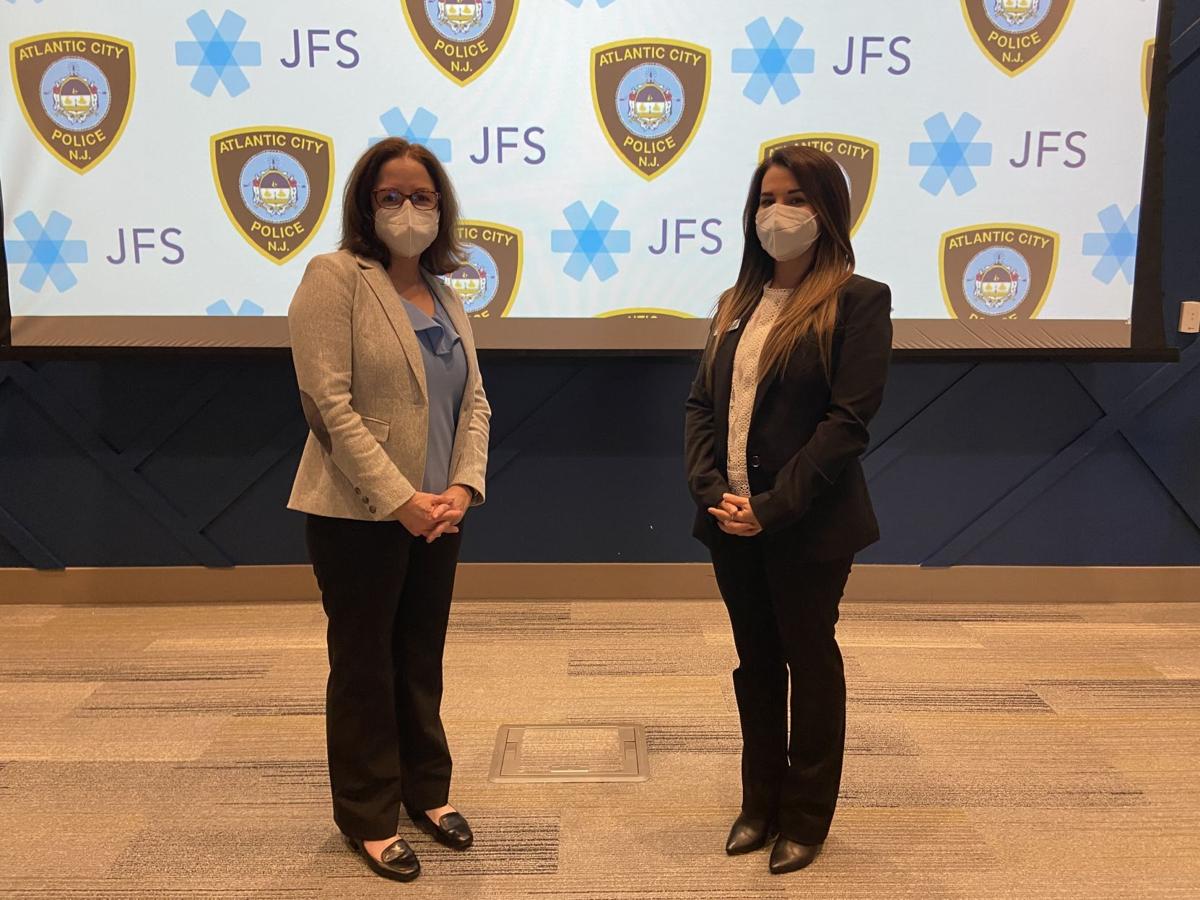 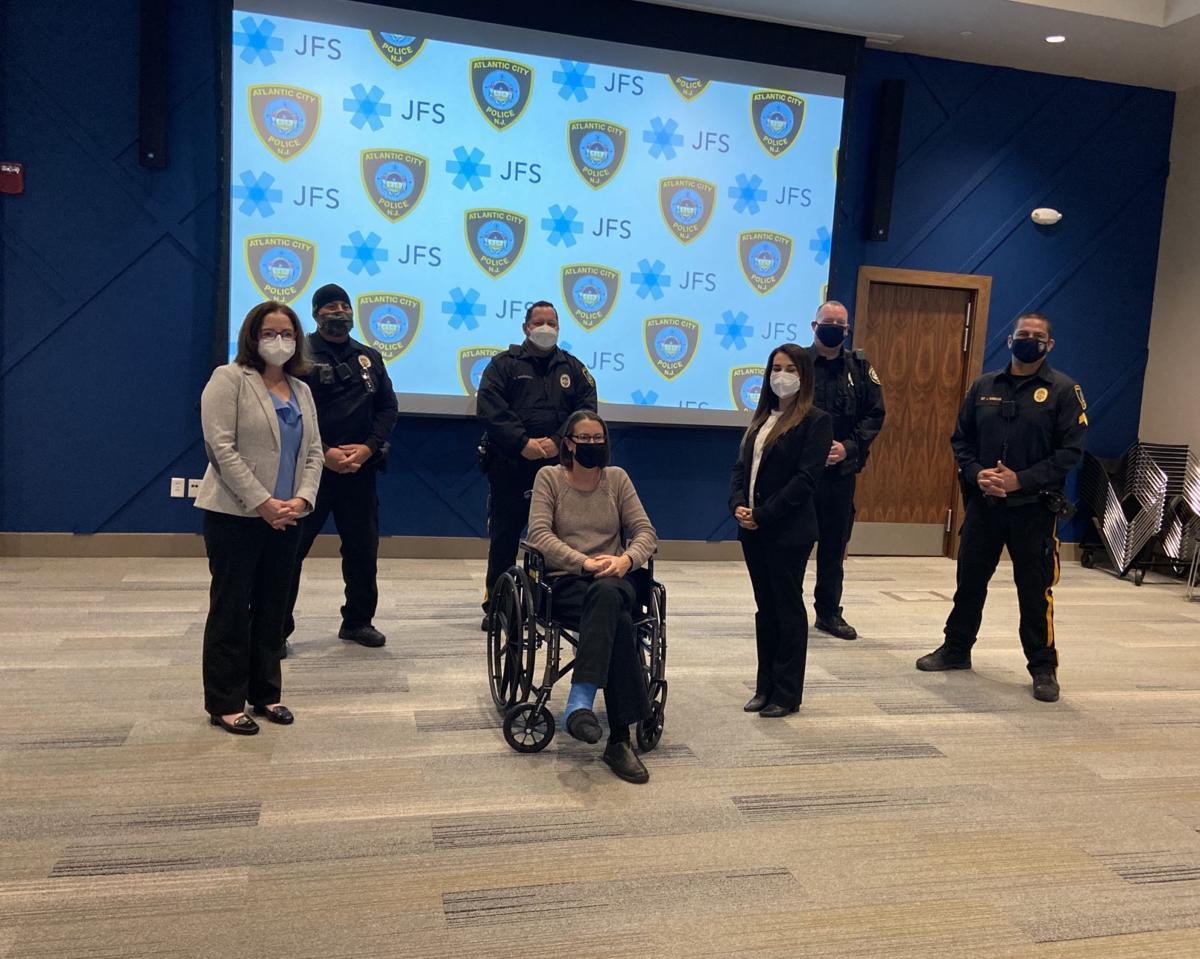 Members of Jewish Family Service of Atlantic and Cape May Counties stand together with members of the Atlantic City Police Department at Friday's press conference at Stockton University's Atlantic City campus.

Selena Vazquez For The Press

ATLANTIC CITY — A $740,576 grant from the Department of Justice will go toward helping police and Jewish Family Service of Atlantic and Cape May Counties improve public safety responses to those with mental illness, substance abuse and homelessness issues in the city.

Police and JFS have been partnering since 2005, providing services for people with mental illness in the city. In 2012, JFS embedded a case manager with the Police Department to support officers on daytime shifts. The new grant will build on that program, which will supply officers and social workers with better equipment to deliver on-site support and after-hours outreach.

“This federal funding will allow the ACPD and JFS to better serve the City of Atlantic City,” said Mayor Marty Small Sr. “I applaud the commitment of these two community-minded organizations to help those individuals who are in a mental health crisis, and the administration fully supports their efforts.”

Police and JFS will use the grant over the next three years to build on an existing program that provides services to the city’s homeless population, especially those with mental illness and addiction issues.

ATLANTIC CITY — Police confirmed Friday that a 29-year-old male city resident, who has been …

Likewise, the grant will provide funding for a sex worker outreach strategy targeting women and girls with mental illness or substance abuse issues living in motels, rather than on the streets.

During the nine-month planning phase of the program, Tartaro will establish baseline data for objectives, while identifying what kind of data each agency should be collecting, when and how.

“I have always wanted there to be 24-hour mental health support for police calls for service in Atlantic City,” said Tartaro. “This program has the potential to help us divert people away from the criminal justice system and into more appropriate mental health treatment.”

Funding also will provide specialized equipment that will help track where homeless people are spending the evening, and allow for the hiring of two new JFS mental health professionals, including a licensed clinical social worker and a case manager.

“Stories of police interactions with individuals who have mental illness continue to lead media headlines, and this program combines the strengths of both the ACPD and JFS to better serve Atlantic City,” Steinberg said.

Last year, city police received 714 calls for service specifically involving people with mental illness. A survey in January 2019 found that of 357 people who were experiencing homelessness in Atlantic County, 162 of them had a severe mental illness and 115 had substance abuse issues.

“Each day, our officers encounter individuals that fall into at least one of these categories. It is our duty to offer the necessary services that many others have access to,” Sarkos said.

The DOJ grant will allow a Critical Intervention Team to review practices and lessons learned from other projects that embed social workers with police. The project also will review ACPD mental illness calls for service and how they are being decoded by dispatch, officers and after-action reports.

A focus group of people who have successfully been housed and/or have been diverted from the criminal justice system will serve as examples and motivation for people seeking help.

“People want what we all want,” said Rodgers. “People want a family, a home, a job, and we’re here to help them achieve those goals.”

The program is expected to start by the spring.

ATLANTIC CITY — Throughout the country, cities struggling with violence have supplemented traditional law enforcement by turning to people who…

Hundreds of people around South Jersey attended socially-distanced Veterans Day ceremonies Wednesday to honor those who fought for our freedom.

ATLANTIC CITY — Police and Jewish Family Service of Atlantic & Cape May Counties have received a $740,576 federal grant to improve public …

Members of Jewish Family Service of Atlantic and Cape May Counties stand together with members of the Atlantic City Police Department at Friday's press conference at Stockton University's Atlantic City campus.