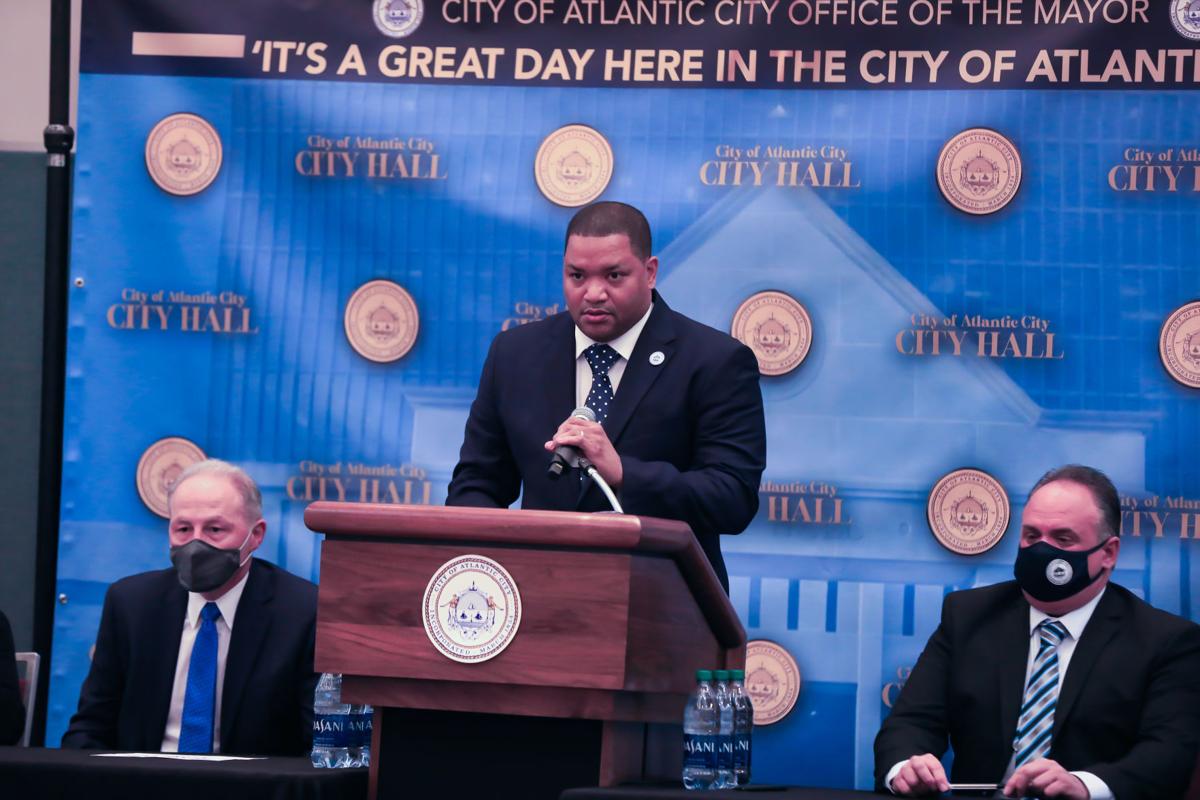 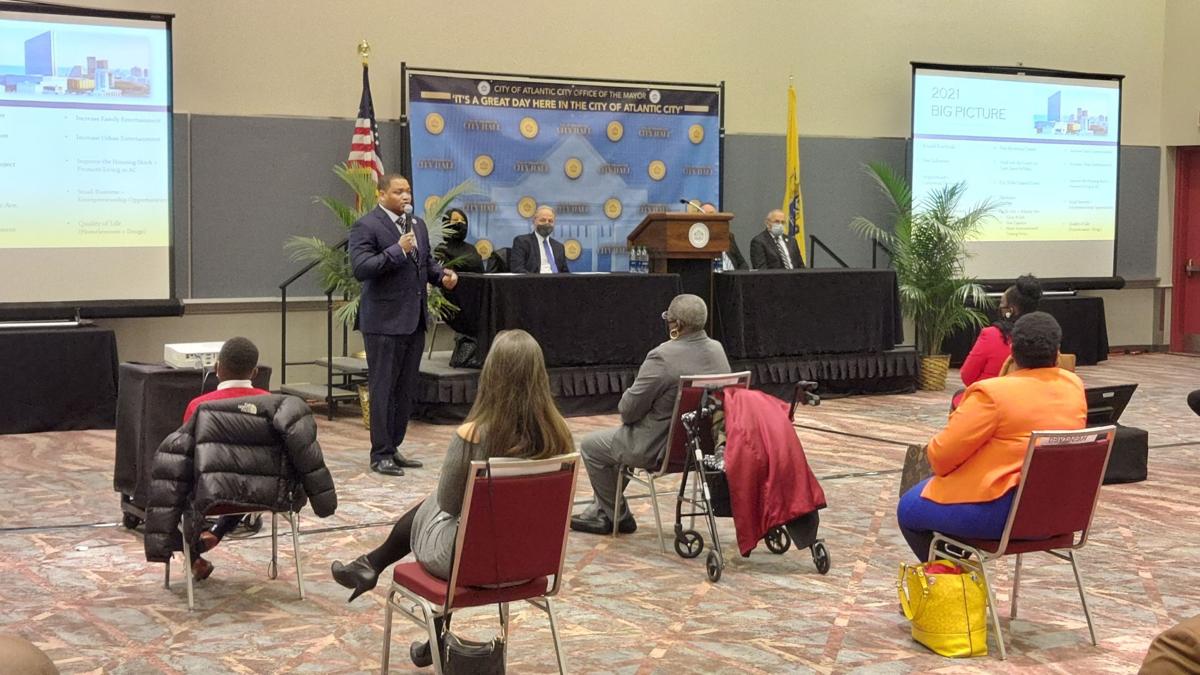 ATLANTIC CITY — The city is poised for a development boom this year, including a new African American museum and recording studio to be built as a joint project between the city and three other entities, Mayor Marty Small Sr. said during his second State of the City address Thursday night.

Small also vowed there will be another property tax reduction this year, in spite of the COVID-19 pandemic’s negative effect on businesses and jobs.

Small spoke to an audience of about 100 people at the Atlantic City Convention Center, as the nation ends its first year of COVID-19 restrictions that severely affected the casino industry.

He has been peppering his speeches for quite some time now with “It’s a great day here in the City of Atlantic City,” which his staff also uses when they answer his office phone.

Small said the city needs a new slogan and he will work with the Casino Reinvestment Development Authority and Meet AC to come up with something better than “Entertainment Capital of the Jersey Shore.”

“When I was a kid we were ‘The World’s Playground’ and we acted like it,’” Small said.

Regarding the city’s finances, Small offered “kudos to the budget team working collaboratively with the state” just before his speech. “We are producing a tax decrease again and a budget under $200 million.”

Small said the loss in city revenues wasn’t as bad as expected. Property tax collections are at more than 94%, he said.

The mayor said the city will lease its vehicles from a rental company and replace them every five years. It will keep the fleet replenished and take away the need to do maintenance, he said. He did not say what the cost would be, or if he expects an overall savings.

He also said he would provide Tasers for all police officers this year, giving them another alternative to deadly force, and wants to recruit more women to the department.

Regarding development, the African American museum project, slated for the corner of Kentucky and Arctic avenues, is planned for completion in time for the city to host the 2022 national convention for the NAACP, Small said. It will be a joint project of the city, the Atlantic City Housing Authority, the Casino Reinvestment Development Authority and Atlantic Cape Community College.

He also showed plans for a renovation project for Caesars Atlantic City, and illustrations for a luxury residential project planned in the Marina District in a joint partnership between MGM Resorts International and Boraie Development LLC.

There has been some other good news for the resort. The Atlantic City Police Department recently reported serious crime was down 33% in 2020, and the longtime eyesore of the vacant former Trump Plaza casino tower will come down next week in a highly publicized implosion.

Getting Trump Plaza down was a goal in Small’s first State of the City address last January, he said during a Wednesday news conference on the implosion plan.

Atlantic City prepped for optimism and recovery in 2021

Like so many others, I had high hopes for 2020. After a decade of declines, Atlantic City’s …

The city, however, continues to face challenges being among one of the areas in the nation most affected by COVID-19 restrictions.

Atlantic City’s casinos were closed from March into July last year, and only allowed to reopen with limited restaurant and bar service — a mainstay of gamers. That put about 30,000 people out of work for months at the shutdown’s height, and casino employment has not yet rebounded.

The Atlantic City-Hammonton metro area, which basically encompasses all of Atlantic County, has been in the top three metro areas in the nation for unemployment rates and increases in unemployment during the pandemic. The other two topping that list were other big tourism and/or gaming sites: The greater Las Vegas area and Kahului-Wiluku-Lahaina in Hawaii.

ATLANTIC CITY — Online gaming and sports betting could not come to the rescue in November, a…

Last spring, the Atlantic County metro area had an unemployment rate double that of the state and nation at 33.3%, according to the U.S. Department of Labor.

Small’s speech was overwhelmingly positive as he enters yet another election year.

He ran unsuccessfully against former Mayor Frank Gilliam in 2017, only to see Gilliam’s first two years marred by scandals, a guilty plea to wire fraud and stealing $87,000 from a youth basketball league, and his resignation in October 2019.

Small was appointed interim mayor until an election was held in 2020 to fill the final year of Gilliam’s term. He won that election in November.

But now he must run for his own first, four-year term.

State of the City Address

ATLANTIC CITY — A city man on Tuesday was arrested with a gun after attempting to flee officers through a construction site, police said Thursday.

ATLANTIC CITY — The implosion of the 39-story Trump Plaza casino tower went off at 9:08 a.m., just a few minutes later than scheduled Wednesda…

Atlantic City Mayor Marty Small Sr. and seven other mayors across the state have announced the creation of the New Jersey 40 Acres and a Mule …

TRENTON — A grand jury indicted a police officer on misconduct, assault and tampering-with-public-records charges stemming from an incident la…

What's prime time look like at Atlantic City casinos? 'It's so discouraging.'

ATLANTIC CITY — It was Saturday night at Hard Rock Hotel & Casino Atlantic City, and all Joe Lupo could do was grimace. Last call had come…

1 in 3 people in Atlantic County is jobless, unemployment data show

As unemployment claims slow statewide in New Jersey, the wreckage of business closings due to the COVID-19 pandemic remains increasingly clear…

State of the city