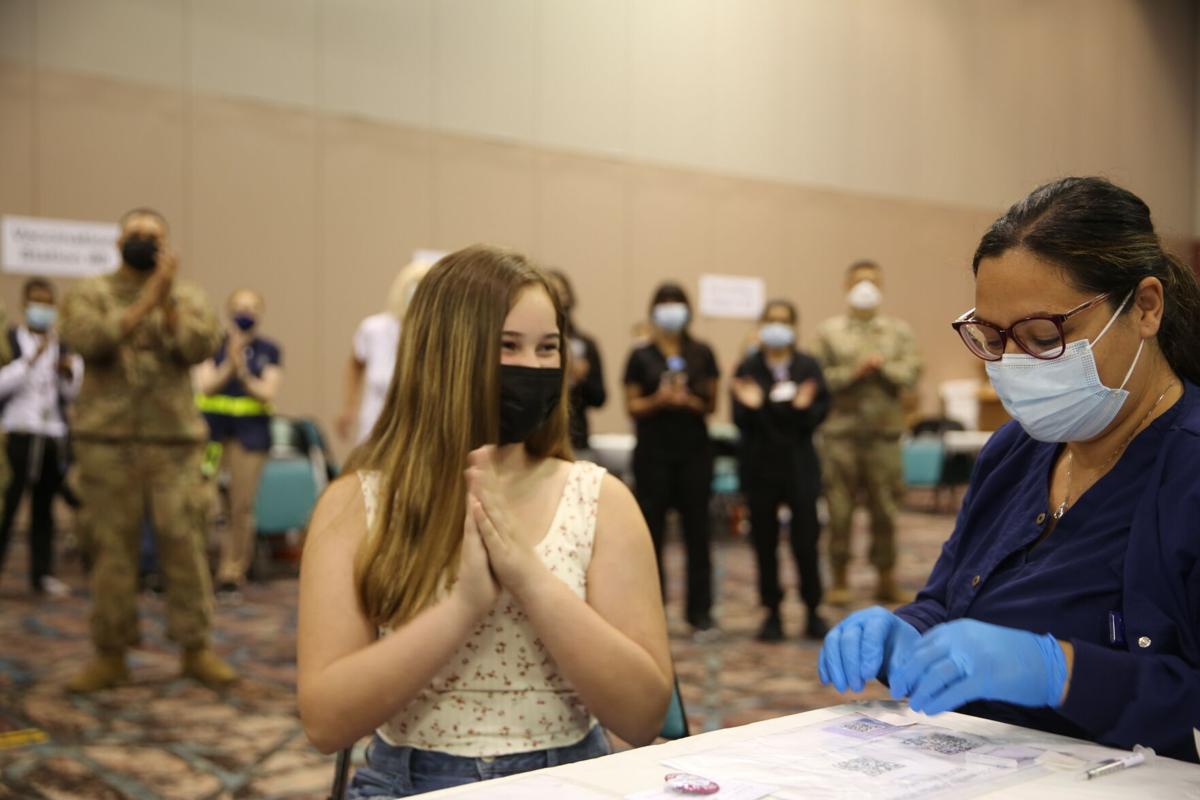 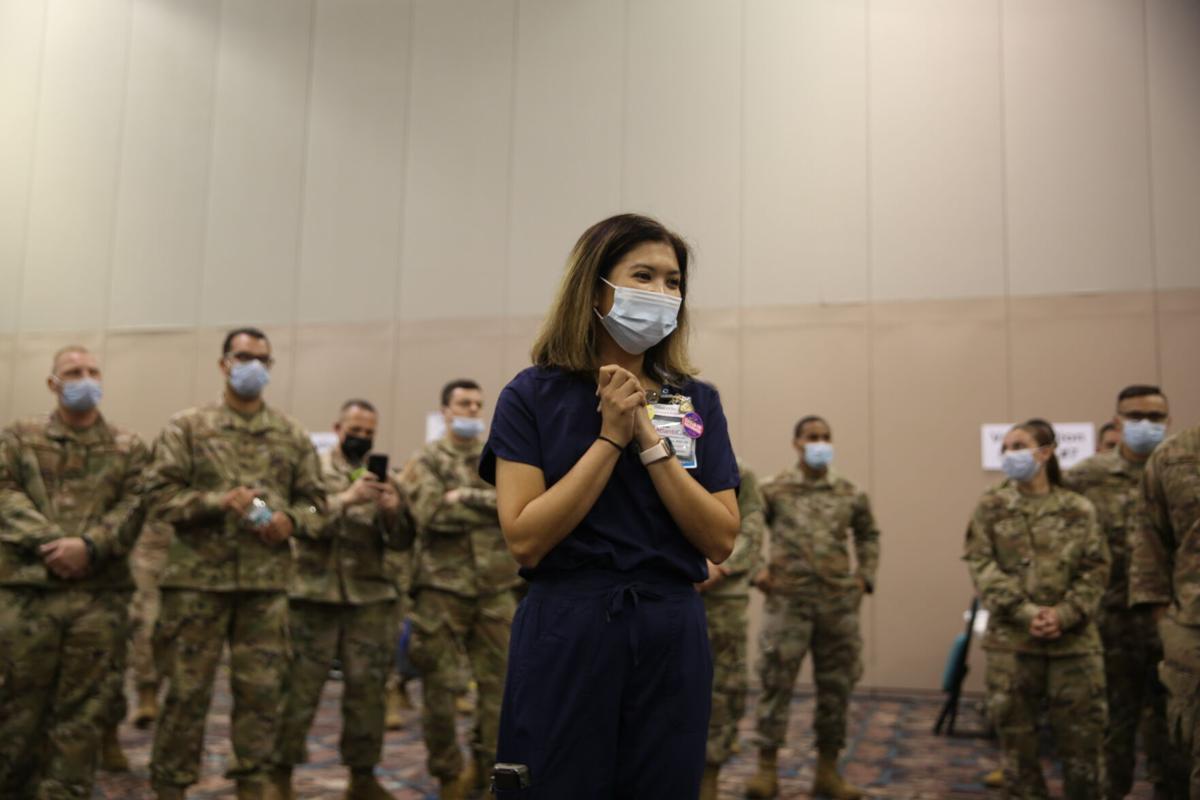 Sherrie Bragg of AtlantiCare, clinical facilities manager at the Atlantic City mega site, speaks to workers before the final shot on the final day of the mega site Saturday. 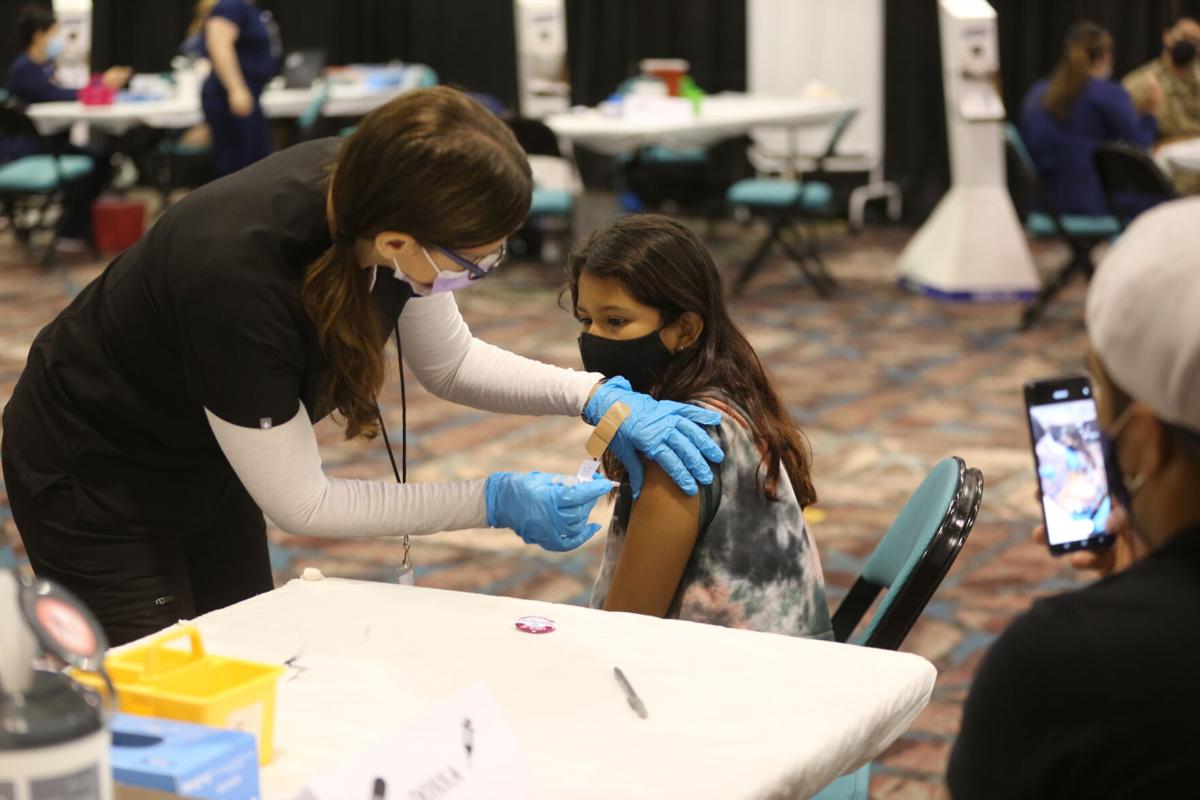 Marifer Ramierez, 12, winces as she receives the COVID-19 vaccine from nurse Donna Mirro-Brown as her father Luis, of Egg Harbor Township, takes a video on Saturday, June 19, 2021, the final day of the Atlantic City Convention Center state mega site for COVID-19 vaccinations. 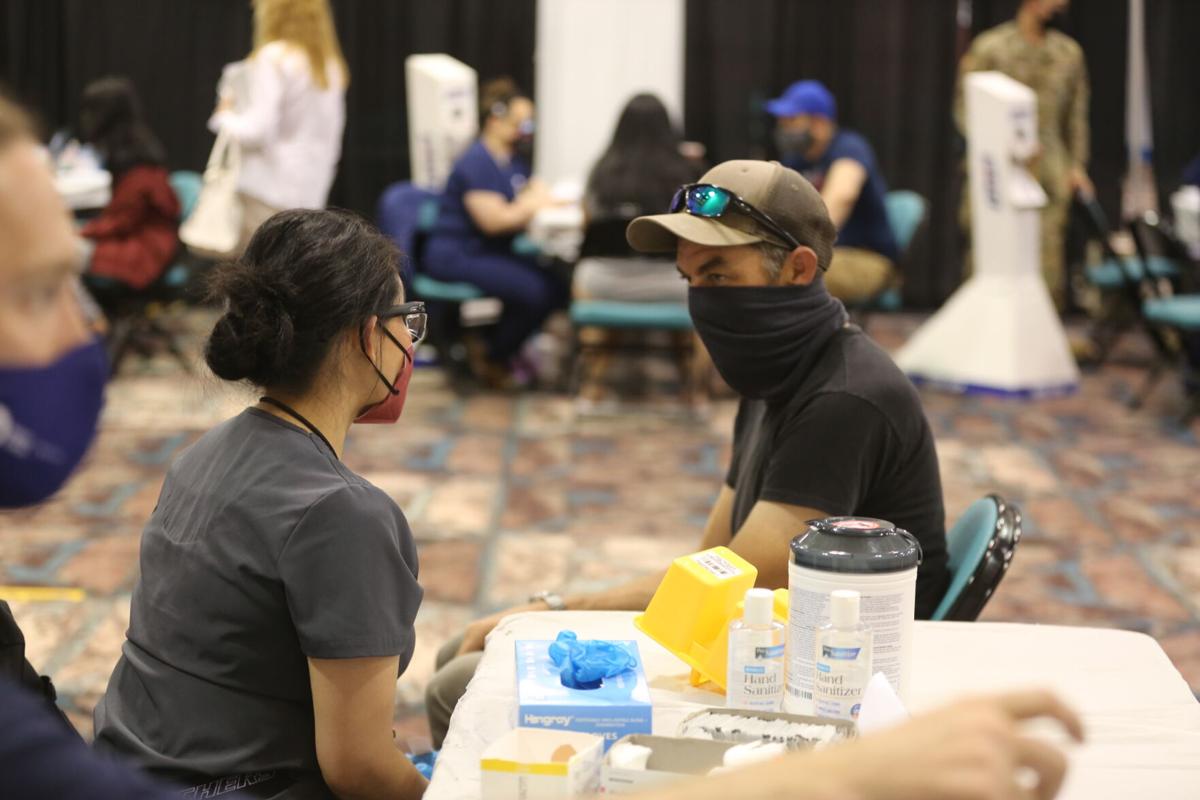 Darran Longman, 45, of Tuckerton readies for his second dose of the COVID-19 vaccine on the final day of the Atlantic City Convention Center state mega site Saturday, June 19, 2021. "It's important for me to do what I can for my species," Longman said. 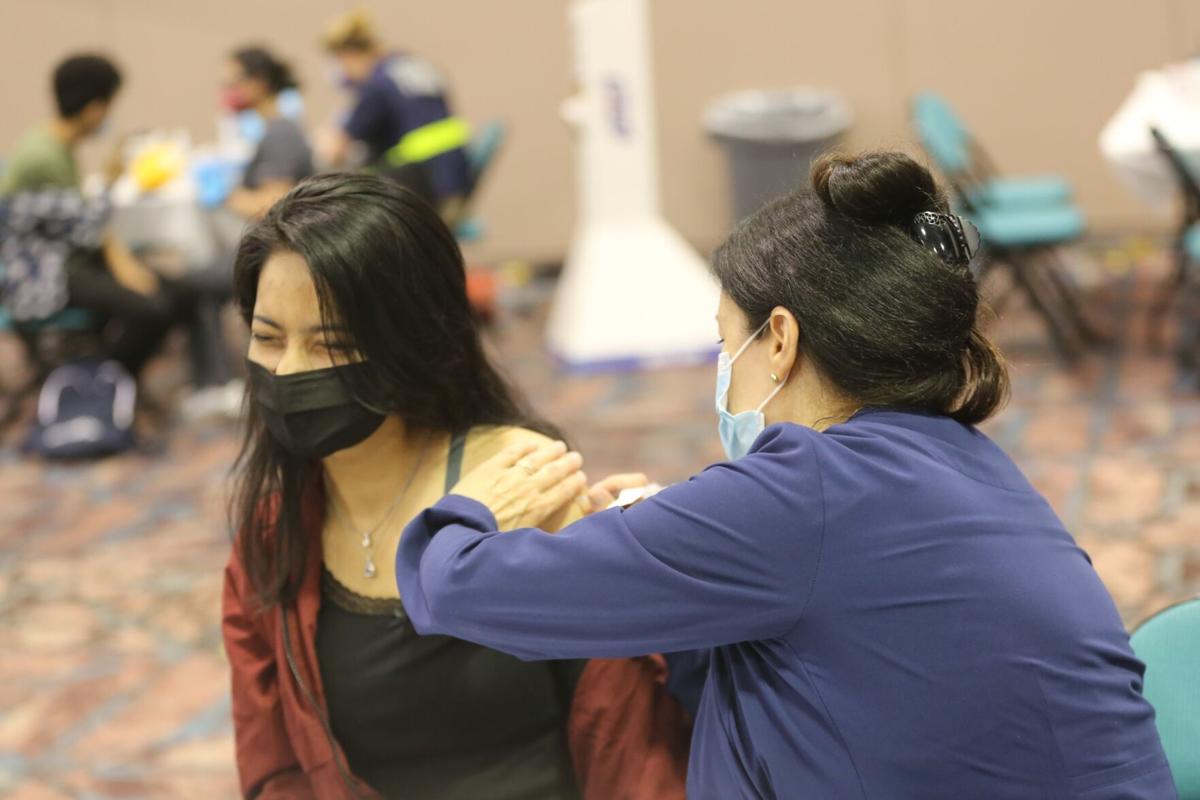 ATLANTIC CITY — Twelve-year-old Kaitlyn Moliver was so eager to get the COVID-19 vaccine that she had been asking her mom to make her an appointment even before people her age were eligible.

On Saturday, Kaitlyn, of Galloway Township, received the second dose of the Pfizer vaccine and received the 272,585th overall dose of vaccine from the AtlantiCare Regional Medical Center mega site. She also was the last person to be vaccinated at the Atlantic City Convention Center site, which is closing after Saturday and transitioning to a mobile operation.

"What made me want to get vaccinated was to be part of the solution to end COVID and help everybody stay safe, especially my family members," said Kaitlyn, who was escorted by mom Mary.

Saturday was somber as the tables were broken down, chairs stacked up and partitions removed from the hall where the site has been located since late January. It also was a celebration for those who'd staffed the site over the past five months from AtlantiCare and the New Jersey National Guard. As Kaitlyn received her shot, she was surrounded by the workers onsite, who broke out in applause. Some shed tears, others hugged or fist-bumped goodbye.

"We will probably never help as many people as we helped here," said Michael Heck, infection preventionist for AtlantiCare.

ATLANTIC CITY — “Excited” was the word on everyone’s lips this weekend as more than 15,000 p…

The closing comes a day after Gov. Phil Murphy announced the state had reached its vaccination goal of 4.7 million eligible New Jerseyans by June 30, although efforts to vaccinate even more people in the state continue.

In late January, a portion of the Convention Center was opened as a COVID-19 vaccination mega site run by AtlantiCare, and eligible residents were clamoring to get an appointment. On its first day in January, 45,000 residents attempted to get one of only 3,000 appointments.

As the weeks and months passed, more residents became eligible to get the vaccine, and as the availability of vaccines increased, the demand waned.

"At one point, we had lines of people," said Sherrie Bragg of AtlantiCare, the clinical facilities manager at the Atlantic City mega site. "This was January. Everybody was masked up. It was a fearful time."

Bragg recalled meeting with state representatives over the winter in a conference room at the Convention Center when AtlantiCare was asked to run the mega site, one of six in the state. They had to develop a plan and a system that was modified many times over the past few months to be both efficient and safe.

"There was no playbook. Nobody knew how to do these mass clinics," she said. "And we wrote the playbook."

In the first weeks, only 10 vaccinators were at the site, but at the height of vaccine distribution in March and April, there were as many as 35 vaccination stations giving out 5,000 doses a day.

On Saturday, Bragg said she felt excited and honored to be a part of it. She said one of her proudest moments was when the Atlantic City site was chosen by Murphy and his wife, first lady Tammy Murphy, to be the location where they were vaccinated. She also recalled the more personal moments, being a shoulder to cry on for those who lost loved ones, and celebrating birthdays with people who wanted the vaccine to be their gift.

Capt. Tanya Kaminsky of the New Jersey National Guard said the collaboration and teamwork that went into running the facility, and the pride of providing so many access to a vaccine, were her biggest takeaways from her time at the mega site.

After administering more than 250,000 doses of the COVID-19 vaccine since January, the mega …

"It was just listening to everybody," she said, adding that working the mega site was also a great opportunity for the public to get to know the National Guardsmen. "I've been overseas. I've been in combat, but this was so special in such a different way, and we all felt it."

Over the months, vaccinators also included staff from the Federal Emergency Management Agency, nursing students from area colleges and retired nurses. There was also community outreach to provide transportation, fill canceled appointments and help those without technology or language barriers make an appointment.

Both Kaminsky and Bragg said the work of AtlantiCare's information technology team was vital to the process.

Jenny Hernandez, a process management consultant for AtlantiCare, worked with the Hispanic Association of Atlantic County to make appointments for Spanish-speaking residents in the region, making more than 1,000 appointments between February and March.

Hernandez was at the site Saturday with her daughter, AnnaSophia, 15, who received her second dose. She said the biggest obstacle in the outreach work was having enough time in the day to make more phone calls.

As the Atlantic City Convention Center prepares to reopen at 100% capacity, state health off…

"They were in tears when they knew we were calling to get them vaccine appointments," Hernandez said, recalling one woman she made an appointment for was 102 years old.

In May, the mega site began doing community-based clinics, working with schools, churches, community organizations and more to create "mini" vaccine sites. As the mega site shuts down, the mini sites will expand, Bragg said.

Kaitlyn said it was great that the facility was transitioning, because it seemed like a turning point in the pandemic.

"It makes me really excited that things can go back to normal now," she said.

For more information on vaccines and AtlantiCare's clinics, visit vaccination.atlantiCare.org. AtlantiCare Physician Group Urgent Care Tuckerton and Somers Point locations are providing vaccinations one day a week by appointment. Call 609-463-4090 between 8:30 a.m. and 4 p.m. to make an appointment.

New Jersey and other states are scrambling to use their supplies of Johnson & Johnson vaccine before they expire. Local, A5

The state’s original goal of having 4.7 million people vaccinated by June 30 has been “left in the dust,” Gov. Phil Murphy said during a media…

Mask policies in New Jersey's public schools during the 2021-22 school year will be left up to individual districts, Gov. Phil Murphy said in …

GALLOWAY TOWNSHIP — Stockton University on Thursday announced that beginning Monday, all students, employees and visitors to the college’s cam…

Sherrie Bragg of AtlantiCare, clinical facilities manager at the Atlantic City mega site, speaks to workers before the final shot on the final day of the mega site Saturday.

Marifer Ramierez, 12, winces as she receives the COVID-19 vaccine from nurse Donna Mirro-Brown as her father Luis, of Egg Harbor Township, takes a video on Saturday, June 19, 2021, the final day of the Atlantic City Convention Center state mega site for COVID-19 vaccinations.

Darran Longman, 45, of Tuckerton readies for his second dose of the COVID-19 vaccine on the final day of the Atlantic City Convention Center state mega site Saturday, June 19, 2021. "It's important for me to do what I can for my species," Longman said.