ATLANTIC CITY — Since reopening in early July, there have been 251 reported positive cases of the novel coronavirus among those who work at a casino, with more than 60% of those cases occurring in October.

According to data obtained through an Open Public Records Act request, 172 COVID-19 cases from employees who work directly for a casino hotel — including executives, housekeepers, bell hops, security personnel, kitchen workers, administrative staff, slot attendants and dealers — have been reported to state gaming regulators. Another 79 cases were reported from those who work at the casinos’ various restaurants and bars.

The numbers reflect self-reported cases by Atlantic City casino operators to the state Division of Gaming Enforcement between July 2 and Oct. 26. 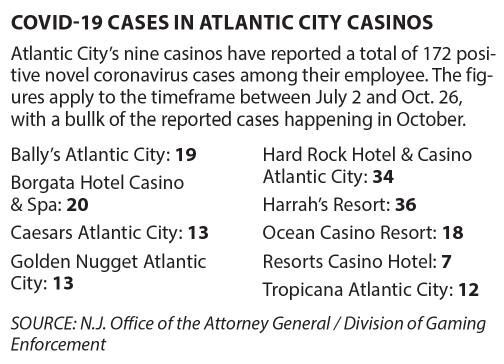 The total number of positive cases represents slightly more than 1% of the entire Atlantic City casino workforce, based on September’s employment data. Casino executives and industry experts said the relatively low number of cases among employees, which is spread out over more than three months’ time, indicates the health and safety policies implemented as part of the reopening plan are working as intended.

“The public safety measures implemented by casino operators — physical distancing, enhanced cleaning procedures, plexiglass and (personal protective equipment) — seem to be having an impact in protecting employees and guests,” said Jane F. Bokunewicz, coordinator of the Lloyd D. Levenson Institute of Gaming, Hospitality & Tourism at Stockton University. “Despite receiving visitors from a number of different states, casinos were able to keep COVID-19 cases low this summer in keeping with equally low case rates in New Jersey and many of the other states that Atlantic City visitors hail from.”

Following a nearly four-month industrywide shutdown to mitigate the spread of COVID-19, Gov. Phil Murphy permitted Atlantic City’s nine casino properties to resume operations July 2 at 25% capacity. Before doing so, the Casino Association of New Jersey and AtlantiCare, in partnership with Unite Here Local 54 and state health and gaming officials, developed a reopening plan that outlined specific actions and procedures designed to make the properties as safe as possible.

Mandatory masks for everyone on a property, routine employee temperature screenings, polycarbonate barriers between table game players and spaced out slot machines were among the enacted policies. Some properties have gone even further, such as taking temperature screenings of guests or upgrading air flow systems to better neutralize airborne pathogens.

“Our strict safety protocols, regulatory oversight, security measures, cleaning personnel, masks, social distancing efforts and surveillance are working,” said Steve Callender, president of the CANJ and regional president of Caesars Entertainment Inc. “These are unprecedented times, which is why the industry has taken extraordinary measures to safely welcome back thousands of hardworking employees and valued guests, while also helping to minimize the exposure of Atlantic City casino property guests, our employees, and our local community to the COVID-19 virus.”

Not a ‘great surprise’

Dan Heneghan, an industry consultant and retired public information officer for the state Casino Control Commission, said that while “any number of positive cases, in our community and economy, is a concern,” the number reported by Atlantic City casinos should not be cause for alarm.

“(Casino) operators have to maintain the highest level of vigilance to stem the spread of this virus,” Heneghan said. “A number this small shouldn’t come as any great surprise.”

Just under 61% of all the positive cases in Atlantic City’s casinos were in October, a rise that coincides with statewide increases. Seventy-one of the 81 total positive cases reported in October have been from employees who work in either casino restaurants or bars.

Indoor dining — at 25% capacity — and beverage service on casino floors was allowed to resume in early September.

The governor has recently suggested that restrictive actions could be forthcoming for businesses in New Jersey if the trend of rising cases continues.

“As we see a rise in cases across New Jersey, we will continue to work with AtlantiCare, our regional healthcare provider, as well as local and state officials, to refine and update our protocols as local and state mandates evolve to protect our employees, vendors, tenants and guests,” Callender said. “We remain dedicated to complying with, or exceeding, local or state-imposed mandates, restrictions and occupancy limits to try to maintain a healthy environment.”

Murphy’s office did not respond to questions about whether there were any concerns over the Atlantic City casino data, whether additional restrictions were being considered or why the public has not been given any information about the positive cases. The inquiry was sent to the state Department of Health by the governor’s office, which also did not respond.

Heneghan said every type of business in the state “has to be concerned about the potential of reimposition of stricter controls,” but added that more clarity, from all involved parties, would be in the public interest.

“This is a serious health crisis we’re in, and it behooves everyone to be more transparent,” Heneghan said.

Bob McDevitt, president of Local 54, the labor union that represented nearly 10,000 Atlantic City casinos workers prior to the pandemic, said he was “absolutely concerned,” that rising cases could impact the industry.

McDevitt said he believed the low number of positive cases supported the idea that the industry and state put in effective measures, but added that some properties could be doing a little more.

In August, Local 54 demanded that Caesars — which, at the time, operated Bally’s Atlantic City, Caesars Atlantic City, Harrah’s Resort Atlantic City and Tropicana Atlantic City — should mandate guest temperature screenings like the other five casino properties do. As of Thursday, Bally’s is operated by Twin River Worldwide Holdings.

“Caesars would be wise to increase their protocols to the rest of the industry because that standard raises us above pretty much any other operation in the hospitality industry in this country,” McDevitt said. “The DGE needs to normalize the highest standard in the city and make that the standard for everyone.”

He acknowledged the delicate balance between enacting policies that allow workers to make money to support themselves, while keeping everyone as safe as possible.

“The state must act responsibly (and) people need to be safe,” he said. “But, at some point, safety can’t overtake the ability for people to make a living.”

Restaurants and bars across the state have been ordered to close indoor dining as of 10 each night starting Thursday, a new restriction to mit…

Fitzpatrick’s Deli & Steakhouse on New Road in Somers Point closed Monday due to recent exposure of someone to COVID-19, according to info…

ATLANTIC CITY — Late in the third quarter of the “Monday Night Football” game between the New England Patriots and New York Jets, the lone ser…

If there’s one thing New Jersey Republicans and Democrats agree on, it’s the importance of protecting the environment, according to research c…

ATLANTIC CITY — Two of the city’s most iconic restaurants are partnering with the city’s first casino to introduce a new dining concept next year.

ATLANTIC CITY — For the fourth consecutive month, the number of people employed by casinos was down by a double-digit percentage compared to l…

Hard Rock on the hook for $1 million annually until 2032

Anyone who came within a slight ocean breeze of Atlantic City’s beaches or Boardwalk this summer, has stayed on a hotel floor with smoking roo…

ATLANTIC CITY — November is typically a time of year when the city would be preparing to host two multi-day conventions, bringing with them an…

September casino employment down 17.5% from 2019 numbers

ATLANTIC CITY — For the third consecutive month, the number of workers employed by casinos decreased compared to 2019, underscoring a trend th…

Pandemic's impact on South Jersey tourism, hospitality will continue in 2021, experts say, but that may not be a negative

The coronavirus pandemic disrupted the tourism and hospitality industries in 2020 and, barring a medical miracle, will likely continue to do s…

ATLANTIC CITY — Total gaming revenue for the city’s nine casinos was up 3% in September compared to last year, ending a six-month streak of de…

ATLANTIC CITY — The lingering impact of the coronavirus pandemic on the city’s casino workforce was evident in August’s employment report, sho…