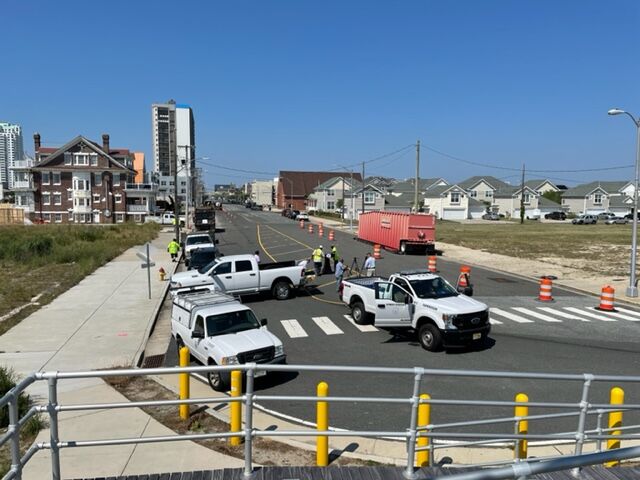 Phase 1 of Atlantic Avenue’s road diet starts at Maine Avenue and the Boardwalk and runs to Tennessee Avenue in front of the Atlantic City Free Public Library. The four-lane road will become two lanes for vehicle traffic with bike lanes and parking on each side to slow traffic down and increase safety. 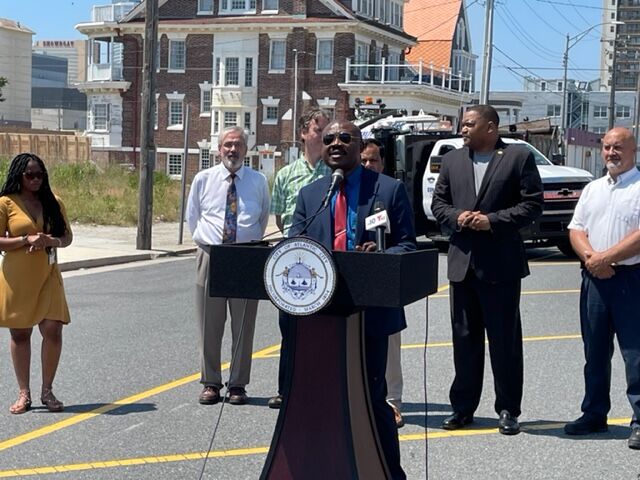 ATLANTIC CITY — Atlantic Avenue’s long-planned “diet” started Wednesday with contractors beginning the work to reduce the city’s main artery to two vehicle lanes from four, repave it and make lighting and other improvements.

The aim of the project is to prevent vehicle crashes and pedestrian injuries and deaths, said Mayor Marty Small Sr. and city Engineer Uzo Ahiarakwe during a Wednesday news conference.

“This is about quality of life and safety, which is paramount,” Ahiarakwe said.

The road also will be changed to add bike lanes and parking on each side, along with new paving, street lighting, improved and synchronized traffic lights, and new sidewalks with trees and landscaping, Small said.

Ahiarakwe said left-turn lanes will be minimized in the new design because cars turning left off the road often are involved in accidents.

There will be a minimal median strip separating traffic, Ahiarakwe said.

The engineer said supply chain issues delayed the start of Phase 1 of the project, from Maine Avenue and the Boardwalk in the Inlet to Tennessee Avenue in front of the Atlantic City Free Public Library. City Council approved the project in a 3-2 vote with one abstention and three absent in December.

Two additional phases will complete the project through Albany Avenue, said Small, at a total cost of $21 million.

“I repeat, $21 million, combination from state and federal (funding) at no cost to the taxpayers in the great city of Atlantic City,” Small said.

Inlet resident Ed Price was walking by on the Boardwalk as the news conference was getting set up at Maine Avenue, and said there is very little vehicle or bike traffic on Atlantic Avenue in his neighborhood.

“People don’t ride their bikes on the road, they ride on the Boardwalk,” Price said.

He doubted slimming the road would slow down vehicle speeders.

“What you have to do is get rid of the boys on ATVs at night,” he said of young people who ride all-terrain vehicles and dirt bikes illegally on city streets.

Some council members have said they will not vote to continue the project with Phases 2 and 3. They have expressed concern that traffic will be forced onto smaller roads to avoid backups on Atlantic, and have said their constituents don’t want the project in busier sections of town.

In December, council awarded a $4.5 million contract — financed through state and federal funds — to Charles Marandino LLC of Milmay for the first phase of the work.

Second Ward Councilwoman LaToya Dunston voted against awarding the Phase 1 contract, as did 1st Ward Councilman Aaron “Sporty” Randolph. Phase 1 goes through both of their wards.

To qualify for federal funds, Ahiarakwe has said the road diet was necessary to address safety issues on Atlantic Avenue, which he called one of the most dangerous in the country for pedestrians and vehicle crashes.

But some council members remain opposed to further phases.

“Anything beyond Phase 1, there is definitely not a consensus to proceed,” said Councilman Jesse Kurtz, who represents the 6th Ward encompassing much of the Chelsea neighborhood.

“Grant applications are still proceeding for Phase 2 and 3,” Kurtz said in December. “I would strongly advise the administration to amend any applications they have in now to avoid embarrassment.”

“I know there’s some naysayers out here,” Small said Wednesday. “Don’t just say something won’t work in Atlantic City because it didn’t work in other towns. We are unique. And where else are you going to get the money to pave the entire Atlantic Avenue?”

ATLANTIC CITY — Mayor Marty Small Sr. is calling a plan to move back to non-partisan elections an attempt to destroy the Democratic Party by a…

ATLANTIC CITY — During the next several months, the William K. Cheatham Building, the main branch of the Atlantic City Free Public Library on …

New technology invariably arrives before it is understood well enough to get the most from it with the fewest harms. The internet is the preem…

ATLANTIC CITY — The city’s “road diet” for 2.7 miles of Atlantic Avenue is not the first controversial plan for improving traffic flow here an…

Don DeGrazia, 102, of Northfield, has seen a lot of U.S. history and remembers the great job done by the Civilian Conservation Corps from 1933…

ATLANTIC CITY — Four-lane Atlantic Avenue is about to get slimmer and, the city hopes, safer.

Should Atlantic Avenue in Ventnor and Margate be put on a 'road diet'?

Phase 1 of Atlantic Avenue’s road diet starts at Maine Avenue and the Boardwalk and runs to Tennessee Avenue in front of the Atlantic City Free Public Library. The four-lane road will become two lanes for vehicle traffic with bike lanes and parking on each side to slow traffic down and increase safety.