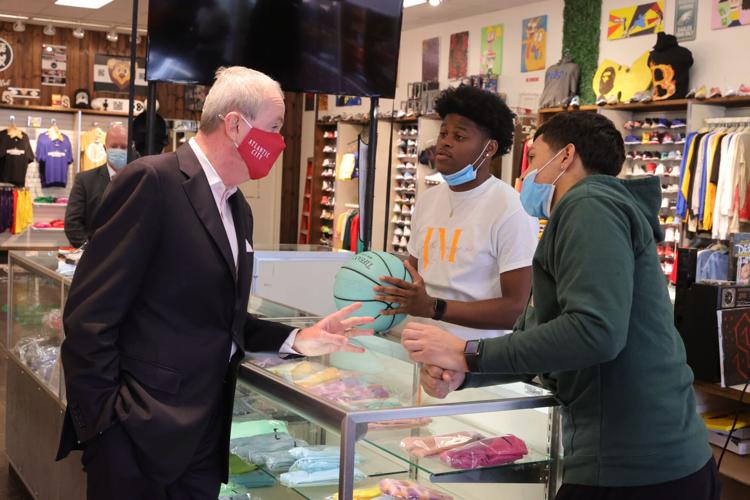 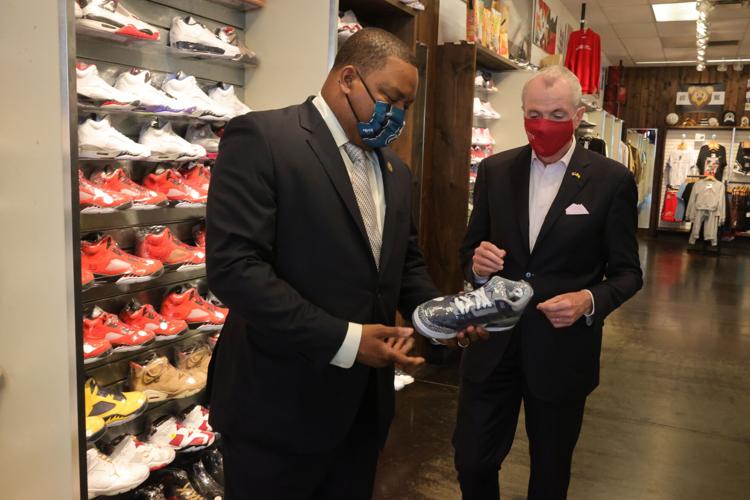 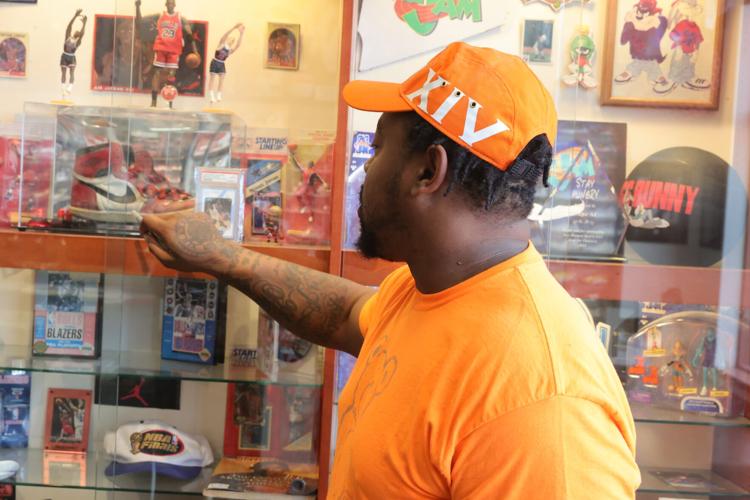 Ed Wilson, 35, of Atlantic City, is one of four co-owners of Swapz AC, a vintage and collectible sneaker shop at Tanger Outlets The Walk.

ATLANTIC CITY — Sneaker collectors are a diverse group, and the owners of Swapz AC have no trouble finding people interested in the collectibles they sell, or those wanting to buy 10-year-old Nikes for hundreds to thousands of dollars, store co-owner Ed Wilson said Tuesday.

Although they had to close their store during part of the COVID-19 pandemic, the owners told Murphy that once they reopened business was good.

Small businesses in New Jersey were hit hard by the pandemic, Murphy said, but he stressed the state has provided more direct aid to them than any other state but California and New York.

That’s one reason he has decided not to use some of the state’s $6.2 billion in American Rescue Plan funding to replenish the state’s Unemployment Trust Fund, he said. Instead, an increase in the unemployment tax on businesses will hit next month.

“I’m not closing the door on anything,” Murphy said. “I want to get the biggest bang for the buck.”

State stalls plan to give Atlantic City municipal workers $3,500 each in recovery funds

ATLANTIC CITY — City workers did not get promised $3,500 checks Thursday to thank them for k…

More than 70,000 businesses in the state have received some type of COVID aid so far, Murphy said.

The New Jersey Business and Industry Association and many lawmakers have opposed the unemployment tax increase on employers, saying it is another badly timed hit to job creators as they try to recover from pandemic losses.

State Sen. Michael Testa, R-Cape May, Cumberland, Atlantic, has been calling on the governor to prevent the tax increase from taking effect by using federal funds to replenish the trust fund.

“Michael and I have talked, and they are all fair points,” Murphy said of Testa’s arguments for using ARP funds.

Murphy was in South Jersey for campaign appearances. He was due to stop in Galloway Township and Monmouth County later in the day, he said.

The Legislature has “signed bipartisan legislation that has already smoothed out” the tax increase, Murphy said. The legislation phases in the increase of almost $940 million over three years.

Consider flood insurance, even if not in flood zone, Murphy says as more storms approach

A week after heavy storms brought flash floods and tornadoes to much of the state, killing 2…

Every Republican in the state Legislature has signed a petition to convene a special legislative session to prevent an upcoming payroll tax increase on employers, repay debt and restore stability to the state’s Unemployment Insurance Fund, Testa said Monday.

But no Democrat has signed it.

He called it a missed opportunity to work in a bipartisan manner, and said only seven Democrats were needed in the Senate and 13 in the Assembly to provide the majority needed to force Murphy to call a special session.

The unemployment fund’s deficit has more than tripled over the past month to $235 million, Testa said, with borrowed federal funds accruing interest as of Sept. 6.

Other states, including Nevada and Ohio, repaid their federal unemployment loans in full by Sept. 6 using money they received through ARP to avoid unnecessary interest charges, Testa said.

Swapz AC has been at The Walk for more than two years, Wilson said, and in the city for six years.

“Marty, this is like heaven,” Murphy said after examining some of the stock. “I don’t collect (sneakers), but one of my sons used to. Not as much these days, but he’ll be down here in a fast minute if he sees pictures.”

“I probably should have taken more advantage of my height,” said the governor, who is more than 6 feet tall.

Small, a standout basketball player at Atlantic City High School and Stockton University, is a sneaker collector, he said.

“I’m a Jordan guy,” Small said of the Nike sneaker. Retro Jordans are his favorites, he said, which are recreations of “the ones he actually played in.”

ATLANTIC CITY — About five years into a state takeover, the city is about halfway to getting some relief from paying off past mistakes, state …

CAPE MAY — The Cape May County Regional SWAT Team and the county's Crisis Negotiation Team are conducting training Thursday in the city.

VINELAND — First District legislators are tired of having their staffs do the work of the Department of Labor, they said Tuesday during a news…

The payment was made just in time to avoid a power shutoff and an emergency move by the Board of Elections as election season heats up, offici…

Despite decreases in the COVID-19 death rate because of improvements like vaccines, the new disease is still killing at four to five times the…

Business leaders have been asking Gov. Phil Murphy to join about half of U.S. states and use some of the state’s $6.2 billion in federal COVID…

In the second of the Murphy administration’s two online hearings about how the state should spend its $6.2 billion American Rescue Plan grant,…

Trees and power lines knocked down by Ian

Ed Wilson, 35, of Atlantic City, is one of four co-owners of Swapz AC, a vintage and collectible sneaker shop at Tanger Outlets The Walk.