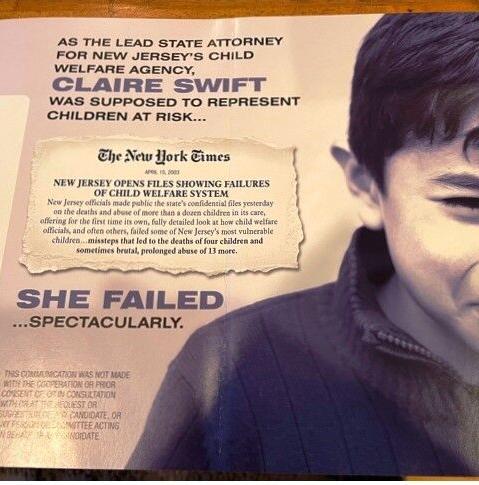 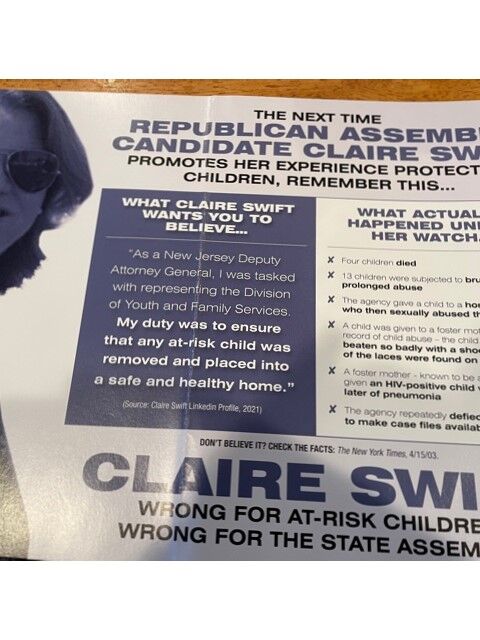 NORTHFIELD — Negative mailers seem to arrive in mailboxes every day during election season, usually coming from independent political action committees rather than candidates themselves.

One Assembly candidate in the 2nd Legislative District believes the Democratic Garden State Forward PAC, which has ties to the New Jersey Education Association, has gone too far in its attacks on her record as a deputy attorney general in Atlantic City from 2000 to 2003.

Republican Claire Swift’s law firm is demanding that Garden State Forward retract a campaign mailer blaming her for the deaths of four children and the "brutal, prolonged abuse" of 13 in the state's foster care system.

“You, Garden State Forward PAC, are hereby notified to cease and desist any and all unlawful slander and libel," said a Sept. 23 letter signed by Joseph Swift of the Swift Law Firm. Joseph Swift is Claire Swift's brother. “Your mailer which was sent out to support the election of (Swift's opponents) John Armato and Caren Fitzpatrick on or about September 11, 2021, contains statements that are completely false and without any basis."

Garden State Forward is an independent, "527" organization that can accept donations from contributors without limits or revealing its donors, except to the IRS, according to OpenSecrets, a Washington, D.C.-based nonprofit that tracks campaign financing and lobbying.

The group was formed by the NJEA under section 527 of the Internal Revenue Code. Such groups had once been barred from advocating for issues or to explicitly elect or defeat a candidate.

That changed after the 2010 Supreme Court decision regarding Citizens United, which granted 527 organizations a broader role, according to OpenSecrets. Since then, more organizations, including labor unions, now use 527 status to have an impact on state and local elections.

The NJEA has contributed nearly $13 million to Garden State Forward, according OpenSecrets, which cited data released in April 2019.

Garden State Forward, which shares an address in Trenton with the NJEA, could not be reached for comment.

No one at the NJEA responded to requests for comment.

Swift said Friday the mailer exploited the deaths and abuse of children to try to win a campaign, calling that despicable.

And Democrat Celeste Fernandez, who didn’t gain enough votes in the recount to emerge the wi…

"Over the past several days, classroom teachers — Democrats, Republicans and independents — around Atlantic County have reached out to tell me how appalled they are that their union bosses in Trenton would use union dues to pay for such a vile and disgusting ad campaign," Swift said.

Armato, a Democratic assemblyman, and Fitzpatrick, a Democratic Atlantic County commissioner, did not return phone calls or emails seeking comment.

Their campaign manager, Paul Weborg, issued a statement standing by the mailer, saying Swift has asked to be judged on her record and the campaign opposes censorship of any kind.

"We are as disturbed as any Atlantic County voter to find out that Claire Swift oversaw a regime that was asleep on the job while domestic abuse was happening unchecked," Weborg said. "We stand in support of our invaluable public teachers who are clearly trying to educate voters about the frankly horrifying track record that Ms. Swift is eager to cover up."

The mailer blames Swift in her role as deputy attorney general for failing to protect children from abuses described in an April 15, 2003, New York Times article about cases in which the state's foster care system failed children.

The cases described, however, occurred from 1999 to 2002 in North Jersey and other parts of the state but not Atlantic County, where Swift was a deputy attorney general representing the Department of Children and Families in cases involving child abuse and neglect and termination of parental rights. She was in that position in the Atlantic City office from 2000 to 2003.

GOP's Polistina ready to compete, in spite of 'obscene' Democratic pledge in his race

The letter demands the PAC immediately retract the statements in writing to all recipients, and stop all publication of defamatory material going forward.

“The mailer refers to events that occurred outside of Claire Swift’s jurisdiction, in which Ms. Swift had absolutely no role,” the letter said. “Not only is it misleading to the voters of New Jersey to associate Ms. Swift with these events, it is unlawful to deliberately misrepresent the actions of someone who has an exemplary record of public service defending the rights of children.”

Swift is running for Assembly in the 2nd Legislative District on a Republican ticket with former Atlantic City Mayor Don Guardian, who has also been targeted by a Garden State Forward mailer blaming the one-term mayor for Atlantic City's financial problems and takeover by the state in 2016. Guardian was mayor from 2014 to 2017.

In fact, financial mismanagement over decades caused the near bankruptcy and takeover of the city by the state, which came to a head during Guardian's term in office.

Swift and Guardian are running with state Senate candidate Vince Polistina, an Egg Harbor Township engineer and former assemblyman. Polistina is facing off against Assemblyman Vince Mazzeo, D-Atlantic, for the Senate seat.

After leaving the AG’s office, Swift joined her two brothers in the law practice, where she practices family law, the letter said.

"Classroom teachers — Democrats, Republicans and independents — around Atlantic County have reached out to tell me how appalled they are that their union bosses in Trenton would use union dues to pay for such a vile and disgusting ad campaign."

Before she founded Beacon of Hope, a nonprofit that helps low-income people in Mount Holly, Pastor Darlene Trappier ran her own discount outle…

Supreme Court has lost its nonpartisan stature thanks to Mitch McConnell

Attorney and Republican Assembly challenger Claire Swift, of Margate, is the latest to call for the resignation of the New Jersey Department o…