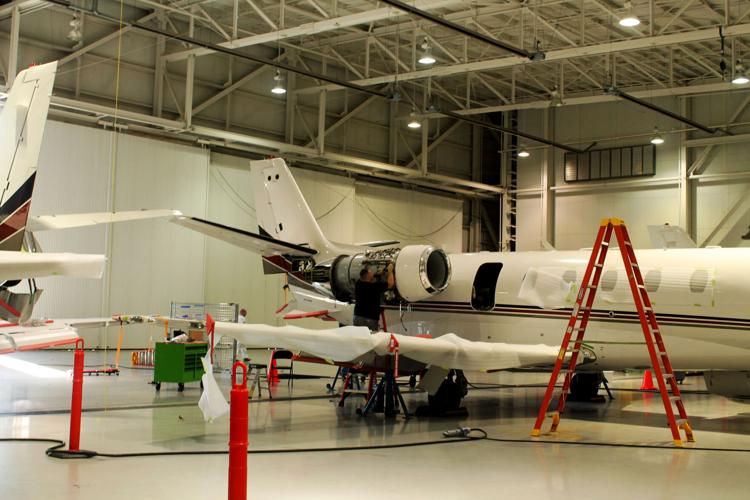 A mechanic works on a plane at Jet East’s facility at the Millville Executive Airport recently. The company’s long-term lease with the Delaware River and Bay Authority is expected to create 250 jobs. 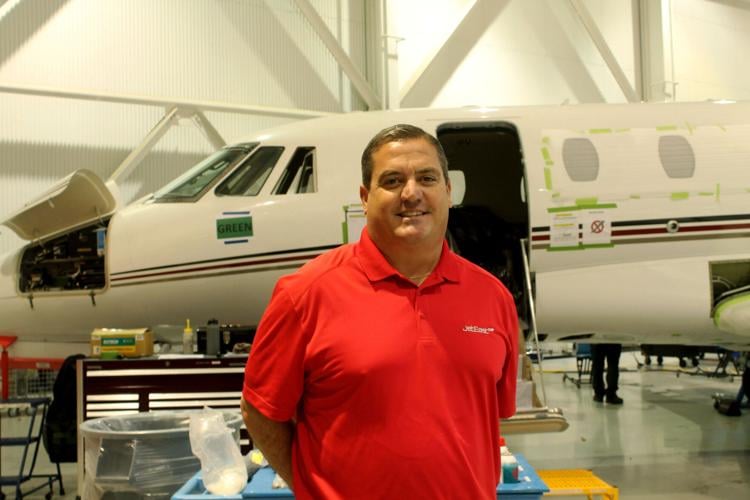 Jim Pacifico, the general manager of Jet East’s Millville location, says his company plans on growing and grooming technicians in the area.

Georgia I. Salvaryn For The Press

Jet East, a global leader in aviation maintenance, has opened a full-service maintenance, repair, and overhaul facility at the Millville Executive Airport as part of a long-term lease with operator Delaware River and Bay Authority that is expected to create 250 jobs.

The arrival of the company fills a gap left by the departure of Dallas Airmotive. Jet East executives also say they plan to recruit students from technical schools in the South Jersey, Philadelphia, and Delaware area.

“We’ve talked to the schools in Philadelphia, and we are going to start recruiting there, have mentoring programs,” said Jim Pacifico, the general manager of Jet East’s Millville and Teterboro locations. “This (growth in the business) has to be deeper than what the area can provide right now. (Millville) cannot provide enough technicians, so we are going to have to groom and grow technicians because we don’t expect this to be any short-term operation here. We expect this to be a 50-year operation.”

Jet East is leasing two aviation hangars located just off Thunderbolt Drive for the next 10 years, with two, five-year extensions as options. The “state-of-the-art” hangars have approximately 70,000 square feet of space for maintenance, office and storage.

“Jet East is a global leader in aviation maintenance and repair services and the DRBA is pleased to welcome them to the Millville Executive Airport,” said DRBA Commission Chairman James N. Hogan. “Over the past twenty years, the DRBA has invested more than $50 million to enhance the airport’s infrastructure, laying the foundation for manufacturing businesses like Jet East to ramp up and take flight here. The sky’s the limit at Millville Executive Airport and we look forward to a successful, long-term relationship with Jet East and their parent company, Gama Aviation.”

According to Pacifico, over 60% of all aircraft mechanics are 50 and older, so they are hoping to hire and train younger workers who are looking to build a career in the field. Rick Lopez, a project manager at the Millville location, said he recently visited ACIT for an open house because they have an aviation program.

“The closest aviation school we have in the area is up in northeast Philly,” Lopez said. “But that’s the only one. They used to have one in Cumberland County years ago, but the funding dried up. We really need to push someone to start something, especially with the TEC center being there.”

Pacifico also mentioned Jet East’s plans to relocate employees from other bases around the country because of the specialized work and certifications.

The facility is fully operational and can perform maintenance work on up to 15 aircrafts. The company already has about 65 employees and expects to hire a total of 250 employees in a variety of career fields including aviation maintenance technicians, avionics technicians, aircraft interior technicians, project managers, and more.

“We are going to bring a technical field to southern New Jersey that hasn’t been there before,” said Pacifico.

The company is looking for a range of workers from entry level to experienced. They offer a competitive salary with an industry-leading benefit package.

“There is going to be a lot of job security for applicants that apply here because these planes aren’t going anywhere, as long as we get the right amount of people here,” he said.

He expects the hangar to be “jamming with business.” The company has a contract with a world-class customer that provides all the aircraft for Jet East.

“We have bases in Trenton, Teterboro, West Palm Beach, Van Nuys, Chicago,” Pacifico said. “And this is all to cover this world-class customer. (These) are not our aircraft; we are the maintenance provider. We don’t work with any other customers.”

According to Pacifico, this customer has about 550 jets and the demand for these aircrafts continues to grow.

“Corporate aviation is booming right now just because of the privatization post-COVID,” he said. “As we hire, (our customer) will bring more aircraft here, and it is almost at an unlimited supply. These corporate jets are where the demand is.”

The new Millville location is one of several located in the northeast sector in Jet East’s network.

“(The company) chose Millville because it’s right between Dallas and New York,” he said. Because of the airport’s location, it makes things much easier for these jets to get the repairs they need and their inspections completed.

Before the opening of the Millville location, pilots had to fly in for their inspections at the Jet East Wichita location, according to Pacifico. He also mentioned that bases, like the Teterboro location, have a curfew and can cause delays.

“There’s no run curfew (here), so operation-wise, (Millville Executive Airport) is a great fit for this operator,” Pacifico said.

Jet East has been working with the DRBA and the Millville community to help build awareness about this new business and these new opportunities.

The large blue hangars are located on Thunderbolt Drive. They were built back in the early 2000s in hopes of bringing corporate aviation to Millville.

Jet East also has the right of first refusal to lease the former Dallas Airmotive hangar facility located off Peterson Street at the airport, according to the DRBA.

The new maintenance and repair facility is open. For those interested in a career with Jet East at the new facility, visit jeteastgama.com/careers.

MILLVILLE — Union Lake Crossing, a 393,000-square-foot dining, retail and grocery retail center, has been sold to the Irgang Group, a Nyack, N…

South Jersey is a good location for aviation work, a short hop off the flight paths to and from several of the nation’s busiest metropolitan a…

In a move that could prompt a legal battle, the Deptford school district has decided to stop covering tuition and transportation costs next sc…

HAMILTON TOWNSHIP — Since he was a child, Te’Jean Florestal has been interested in electronics and video games.

Horseshoe crabs on the Delaware Bay

Horseshoe crabs on the Delaware Bay

A mechanic works on a plane at Jet East’s facility at the Millville Executive Airport recently. The company’s long-term lease with the Delaware River and Bay Authority is expected to create 250 jobs.

Jim Pacifico, the general manager of Jet East’s Millville location, says his company plans on growing and grooming technicians in the area.