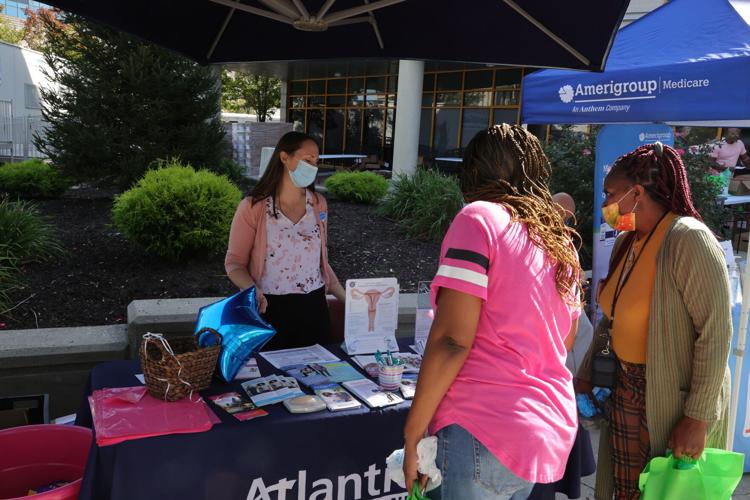 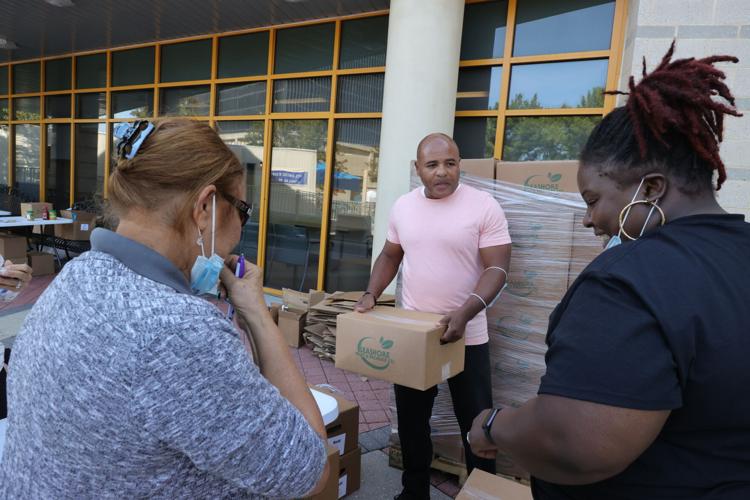 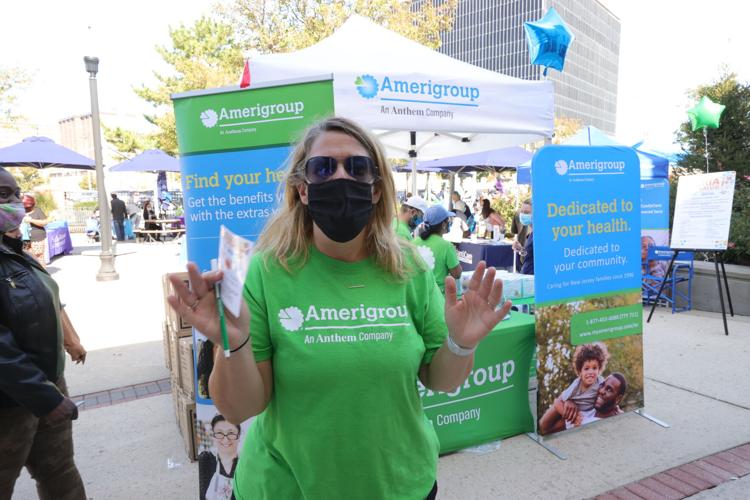 Anya Nawrocky says the health fair started as a Breast Cancer Awareness Month event and “morphed” to include more information and services.

ATLANTIC CITY — Midday on Thursday, AtlantiCare’s Healthplex Serenity Garden was anything but serene.

Music blasted and people gathered for a Women’s Health Fair, part of an education campaign for women’s health during Breast Cancer Awareness Month.

“At first, we wanted to bring some breast health education, and then it morphed into a lot more,” said Anya Nawrocky, director of member experience and growth at Amerigroup.

The health insurance company co-hosted the event in partnership with AtlantiCare and the Community FoodBank of New Jersey.

It is currently an open enrollment period for those who purchase their insurance through the Affordable Care Act marketplace. Amerigroup helped answer questions about health care coverage and how to sign up, while the food bank gave out grocery boxes with enough food to feed a family of four for a week.

Various colored tents and umbrellas made for a patchwork quilt representing all the different groups and resources present, such as the Southern New Jersey Perinatal Cooperative and the Women, Infants and Children program.

ATLANTIC CITY — Two city teens have been arrested in the shooting of a teenage girl, police …

The event’s offerings were not limited to women’s health, with representatives of AtlantiCare’s Hospital-Based Violence Intervention Program in attendance and the Atlantic County Division of Public Health offering free flu and COVID-19 vaccines.

Snacks, swag and goodie bags, diapers and maxi pads were among the items given away.

The giveaways brought attendees to the tables, where representatives of AtlantiCare’s community partners were then able to answer questions.

Rashida Jones, 29, of Atlantic City, who is six months pregnant with a baby boy, was at the health complex for a checkup, after which she walked outside to the garden and decided to check out the event.

“I thought it was a good environment for me to come experience because I’m pregnant,” Jones said.

The expectant mother, who already has four children, has had difficult pregnancies in the past but said her baby has a “strong heartbeat.”

Man, 21, arrested after shooting at car with infants in Atlantic City

ATLANTIC CITY — A man was shot Saturday, with a suspect arrested by city police shortly thereafter.

Once Jones gives birth, she will be entitled to three in-home postpartum visits by a registered nurse, as part of a statewide program Gov. Phil Murphy signed into law in July.

The new law establishes a statewide universal newborn home nurse visitation program in the Department of Children and Families and is intended to provide support to new mothers with breastfeeding and reduce postpartum complications. According to The Commonwealth Fund, a private foundation that conducts independent research to improve health outcomes, 52% of maternal and pregnancy-related deaths occur postpartum.

The United States has one of the highest maternal mortality rates in the developed world.

Compared to the rest of the country, New Jersey’s rate of maternal mortality — the death of a mother during pregnancy or up to 42 days postpartum — is about 1.5 times the national average. The rate in New Jersey in 2019 was 46.4 per 100,000 pregnancies, according to Diane De Lisi Timms, program director of maternal fetal medicine at AtlantiCare. The U.S. rate was 29.6 per 100,000 pregnancies.

In fact, the infant mortality rate is higher in Atlantic City than in New Jersey, Newark and Morristown, according to a Rutgers University study noted in a 2018 assessment of Atlantic City’s progress and strategic advice for its path back to local control. The study also showed that a child born to an Atlantic City family is nearly twice as likely to die before his/her first birthday as a child born in Newark.

Retired Atlantic County health leader saw it all in 40 years

During more than 40 years in the public health field in Atlantic County, Patricia Diamond wo…

As part of the new law, the first postpartum visit includes a health and weight check of the newborn, offers support with breast feeding, monitors the development of any perinatal mood disorders and includes a physical examination of the mother.

After that, two visits would be available within the baby’s first three months.

The voluntary program is offered to all recent mothers, regardless of insurance status.

In addition to making mothers aware of these visits, the education and resources available at Thursday’s event intended to narrow the racial disparities in health outcomes among women and infants.

AtlantiCare’s HealthPlex also offers family planning services every Wednesday from 8 a.m. to 4 p.m. and every second Friday from noon to 4 p.m.

All insurance plans are accepted, and those without insurance are charged on a sliding-fee scale based on income. No one is turned away for inability to pay.

“Our goals are to lower infant and maternal rates, lower unplanned pregnancies and increase STD testing,” said Krista Blair, outreach coordinator for family planning services. “Our numbers of patients each week are increasing, and by next year we will be full time five days a week on a brand new space on Ohio Avenue.”

“In this community, sometimes they lack the resources because they don’t know,” said Vinnie Kirkland, a case manager for AtlantiCare. “Sometimes they are ashamed or embarrassed to ask where they can go. So what we do is bring the partners to them so they can come and meet a partner and they can ask the questions.”

The dean of Rutgers-Camden’s School of Arts and Sciences said this week he was removed from his post by new Chancellor Antonio D. Tillis, stun…

Flu is spreading around the Philly region and the nation. The holidays could help it take off.

It’s still early in the flu season, but it looks as if we’re in for a tougher time this year than last, when COVID-19 precautions practically …

Chronic hypertension has become a major cause of death during and after pregnancy, despite a 40-year decline in overall deaths tied to hyperte…

Doctors and nurses have battled for more than 18 months to contain the spread of COVID-19. All the while, they have worked to confront another…

Anya Nawrocky says the health fair started as a Breast Cancer Awareness Month event and “morphed” to include more information and services.