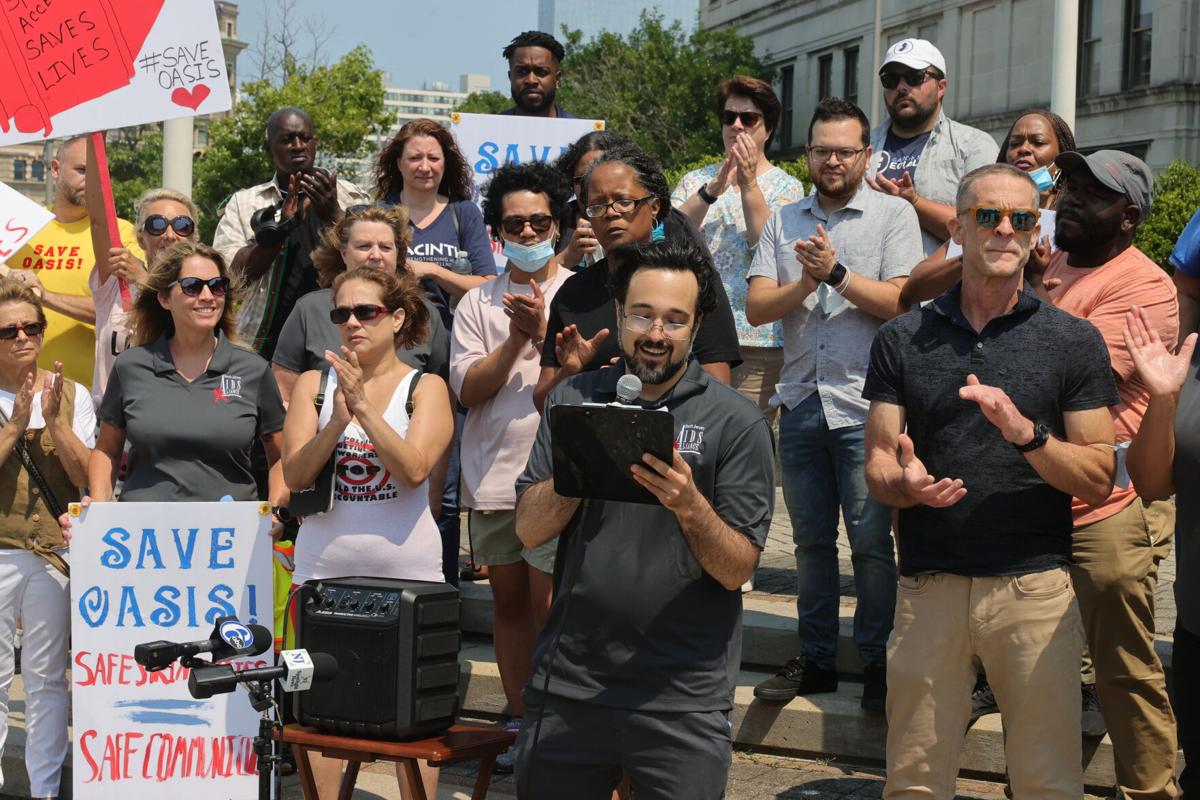 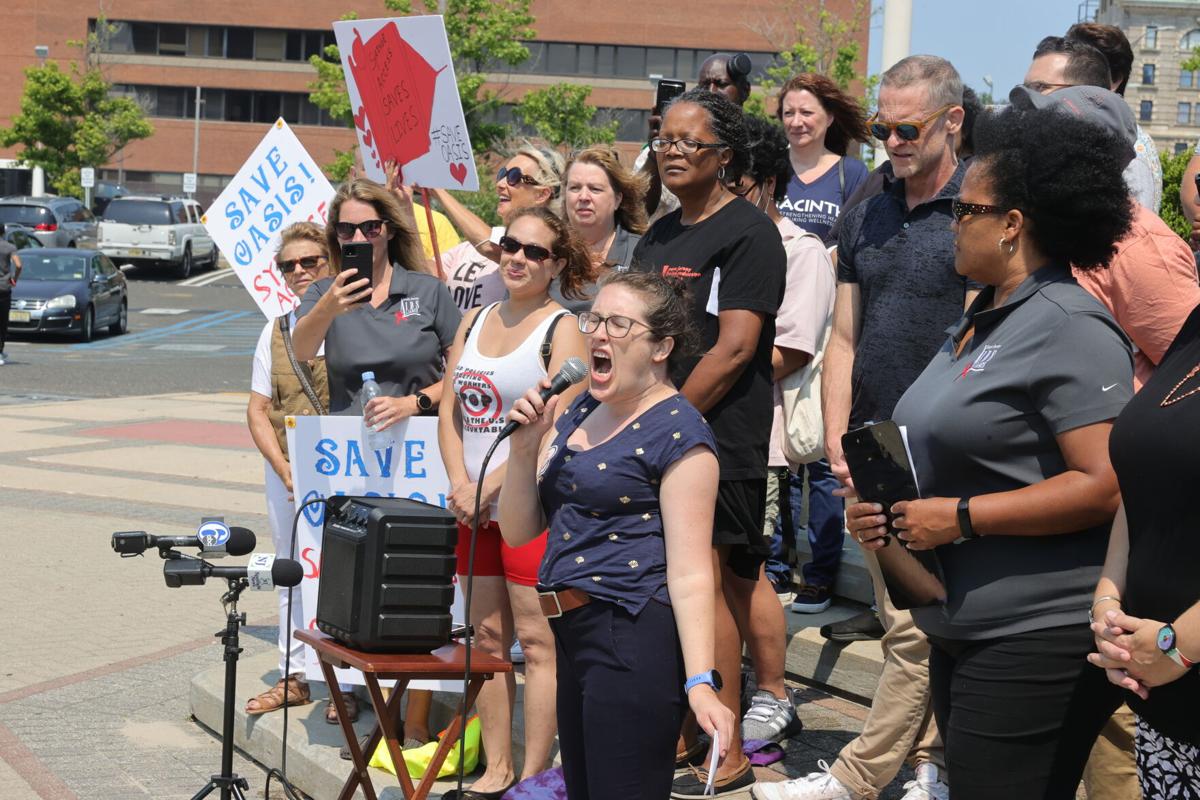 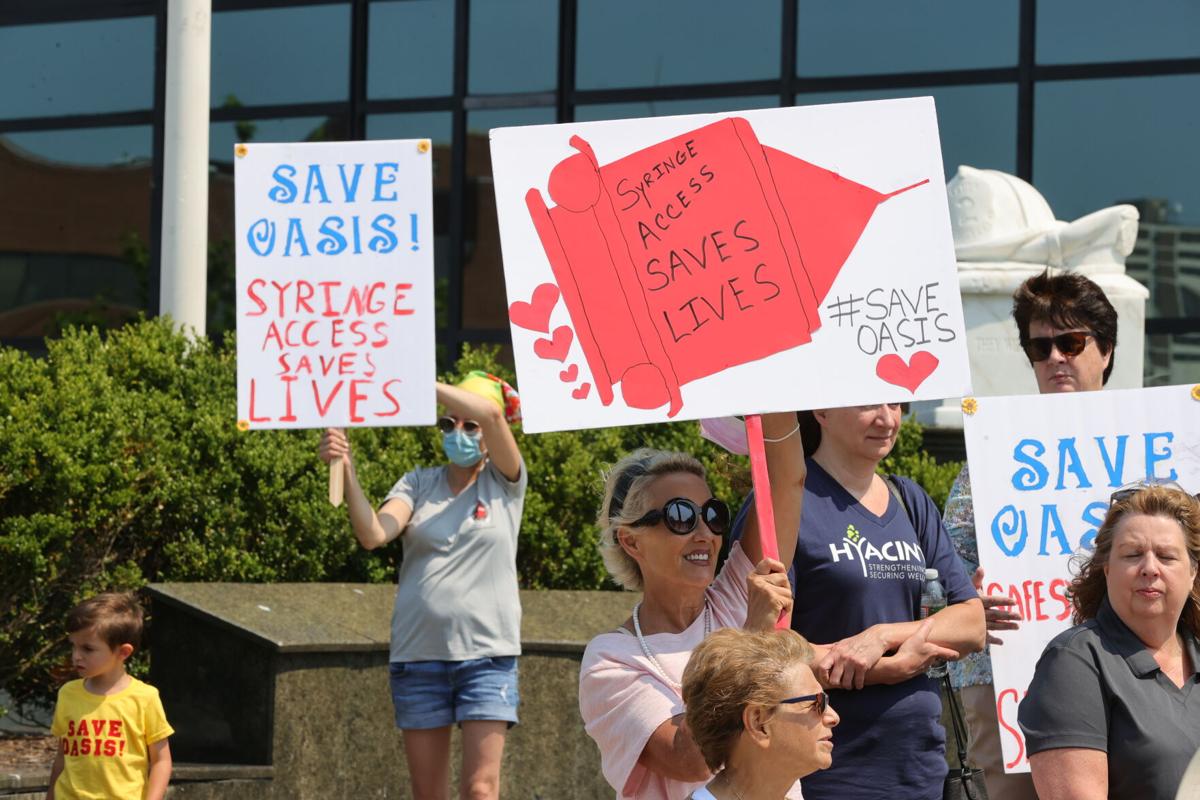 City Council plans to vote July 21 on an ordinance that would repeal the city’s needle exchange. The ordinance was introduced June 16 by a 7-2 vote.

“New syringes are like condoms, a flu shot or Advil,” Jenna Mellor, executive director of the New Jersey Harm Reduction Coalition, told the crowd. “This is a public health tool.”

The effectiveness and location of the program, which operates out of the Oasis Drop-In Center on Tennessee Avenue, have long been debated by city officials, residents and advocacy groups.

During a June 16 council meeting, an ordinance to repeal the program was approved in a 7-2 vote, with Councilman and independent mayoral candidate Moisse “Mo” Delgado and Councilwoman LaToya Dunston opposing.

The ordinance is up for a public hearing and second vote July 21.

Representatives from groups such as the South Jersey AIDS Alliance and the New Jersey Harm Reduction Coalition, along with residents and supporters, stood on the steps of the firefighters memorial Tuesday afternoon with signs that read, “Syringe access saves lives.”

“That’s the whole point of the Oasis Drop-In Center, saving lives,” said Leslie Harrison, of the Harm Reduction Coalition. “It’s not just a space, it’s like coming home. We don’t just do services for people who use drugs like the needle exchange, we look at the whole person and meet the people where they are at.”

Regarding Tuesday’s demonstration, Council President George Tibbitt said the group has a right to rally but they missed an opportunity by just gathering.

“I just really think it’s a shame because today would have been a great opportunity for them ... instead of cheering and yelling they could’ve been picking up needles in the neighborhoods to show us how much they care about the city,” Tibbitt said.

Mike Nees, of the AIDS Alliance, said closing the needle exchange will have dire consequences on public health in the resort.

“An unprecedented outbreak of HIV is at our doorstep, eagerly awaiting for City Council to pass their foolish motion to shut us (needle exchange) down,” Nees said. “We need leaders with the courage to come look at the most vulnerable constituents in the eye and see what I’ve seen for the last 10 years, (which is) the incredible hope and resilience of the people of Atlantic City.”

The syringe exchange program, started in 2007 as a partnership between the AIDS Alliance and the city’s Health Department, is just one of seven in the state, along with programs in Asbury Park, Camden, Jersey City, Newark, Paterson and Trenton.

At the center, which is located in the city’s Tourism District, people can exchange dirty needles for clean ones, get tested for HIV, take showers, get food, do their laundry and use the phone.

The center also is the only publicly accessible source in the city of low-barrier free naloxone, a medication used to treat known or suspected opioid overdoses, according to the AIDS Alliance.

Several members of council have said the city has taken on too much responsibility for social services.

Tibbitt said the resort is committed to doing its “fair share” when it comes to social services.

Anthony Swan, the resort’s business administrator, said last month he would work with Wilson Washington, the director of health and human services for the city, to come up with solutions before the final vote.

As of Tuesday, there were no updates on what those solutions could be, according to Tibbitt.

Syringe exchange programs have been shown to have a positive impact on communities suffering from opioid abuse. According to the U.S. Centers for Disease Control and Prevention, such programs reduce the rates of infectious diseases such as HIV and hepatitis, are cost effective and help reduce drug use and overdoses.

Atlantic County has some of the highest rates of HIV and AIDS in South Jersey, with 515 per 100,000 people living with the diseases in 2018, according to the state Department of Health.

A 2000 study from Seattle found new users of syringe exchange programs were five times as likely to attend drug treatment than those who didn’t participate in the program.

Despite council’s concern that the needle exchange has led to an influx of stray syringes on the streets, the CDC says exchange programs do not lead to more needles being discarded around communities.

As of 2018, Atlantic City’s needle exchange program garnered a 98% return rate, the highest in the state, but had the second-lowest rate of drug treatment admission among the seven programs.

“I will tell you that is because of a lack of good treatment options in Atlantic County, not anything that the harm reduction center hasn’t done,” Mellor said. “Recently, they connected 68 people, 40% of who were Black, to medication for opioid use disorder in a state with grave racial disparities to who has access to these medications.”

ATLANTIC CITY — After struggling with opioid addiction on and off for nearly a decade, things came to a head for Amanda Clinton last year. She…

City Council plans to vote July 21 on an ordinance that would repeal the city’s needle exchange. The ordinance was introduced June 16 by a 7-2 vote.