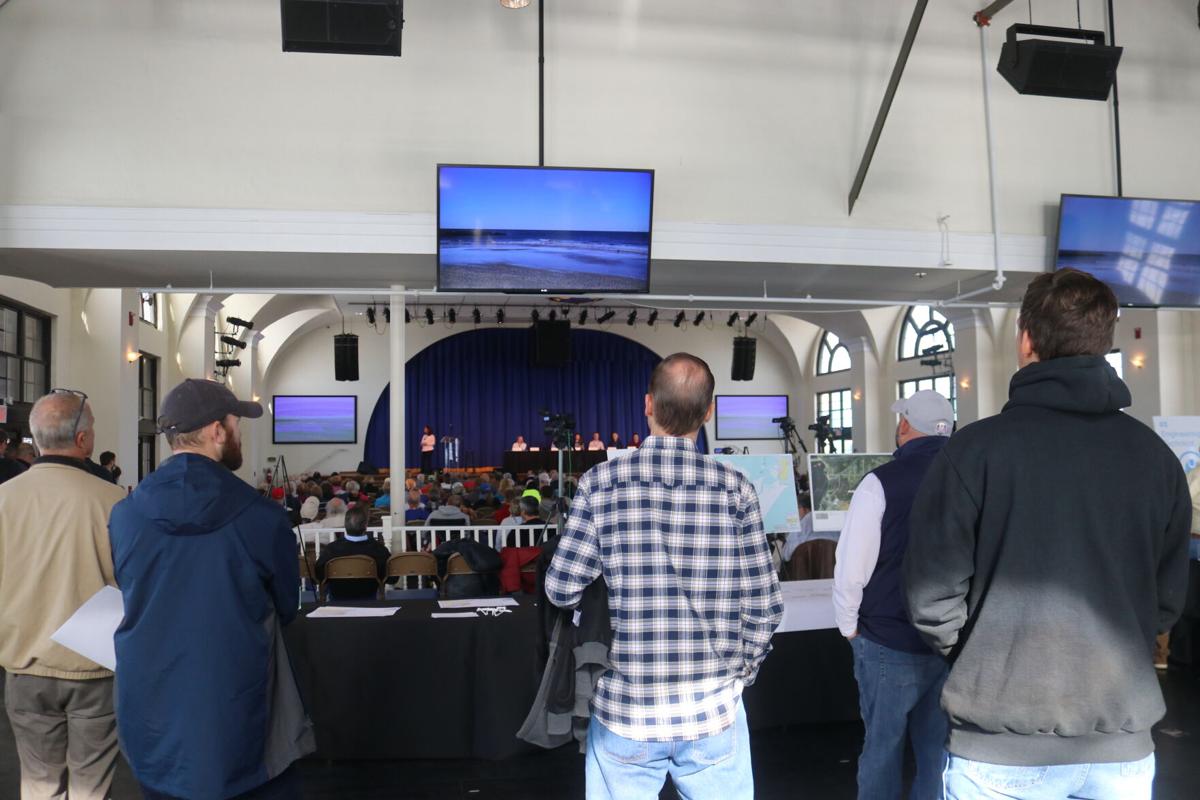 Opponents, supporters and those just curious about plans for offshore wind power in New Jersey attend a meeting Saturday at the Ocean City Music Pier. 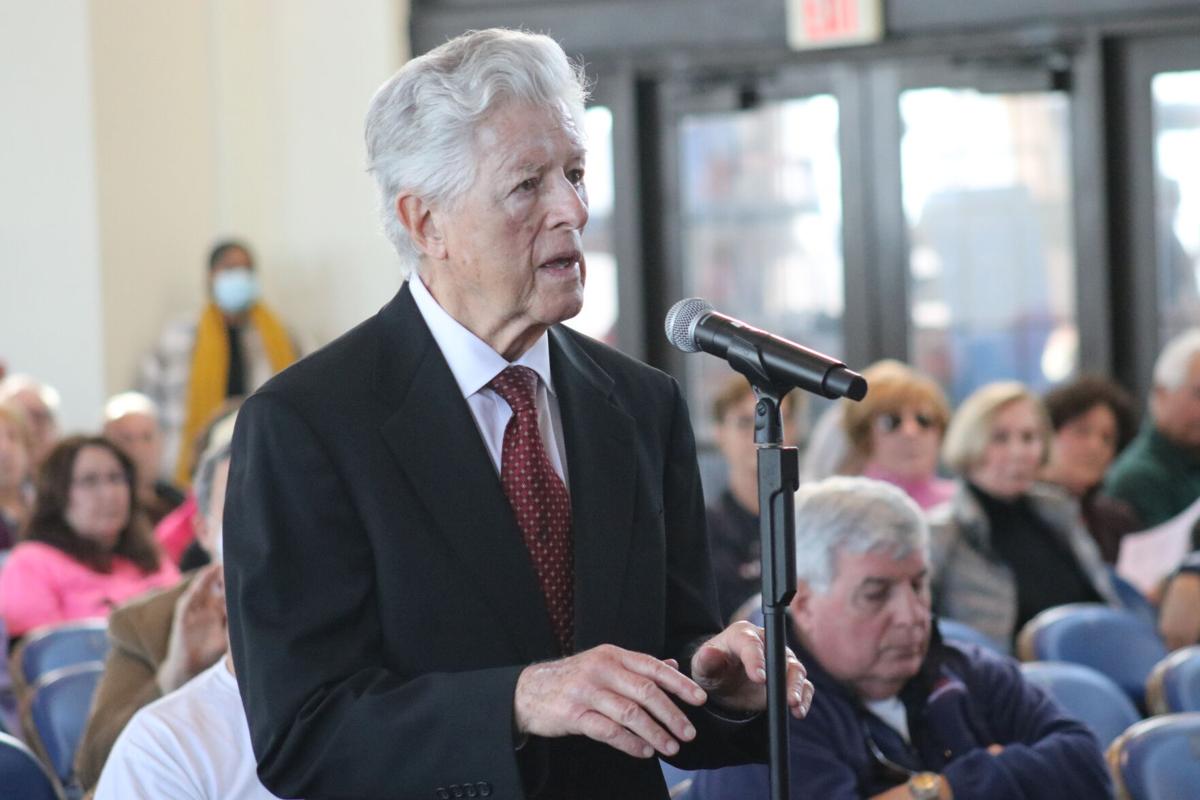 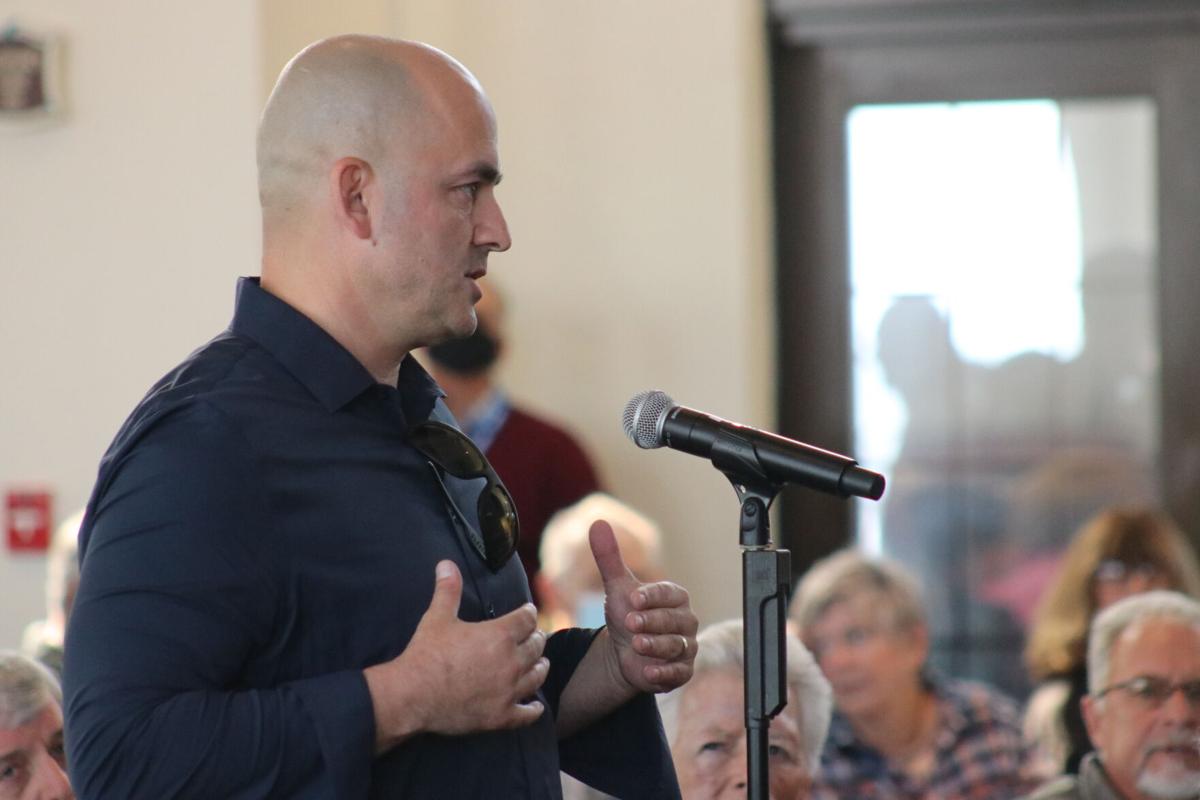 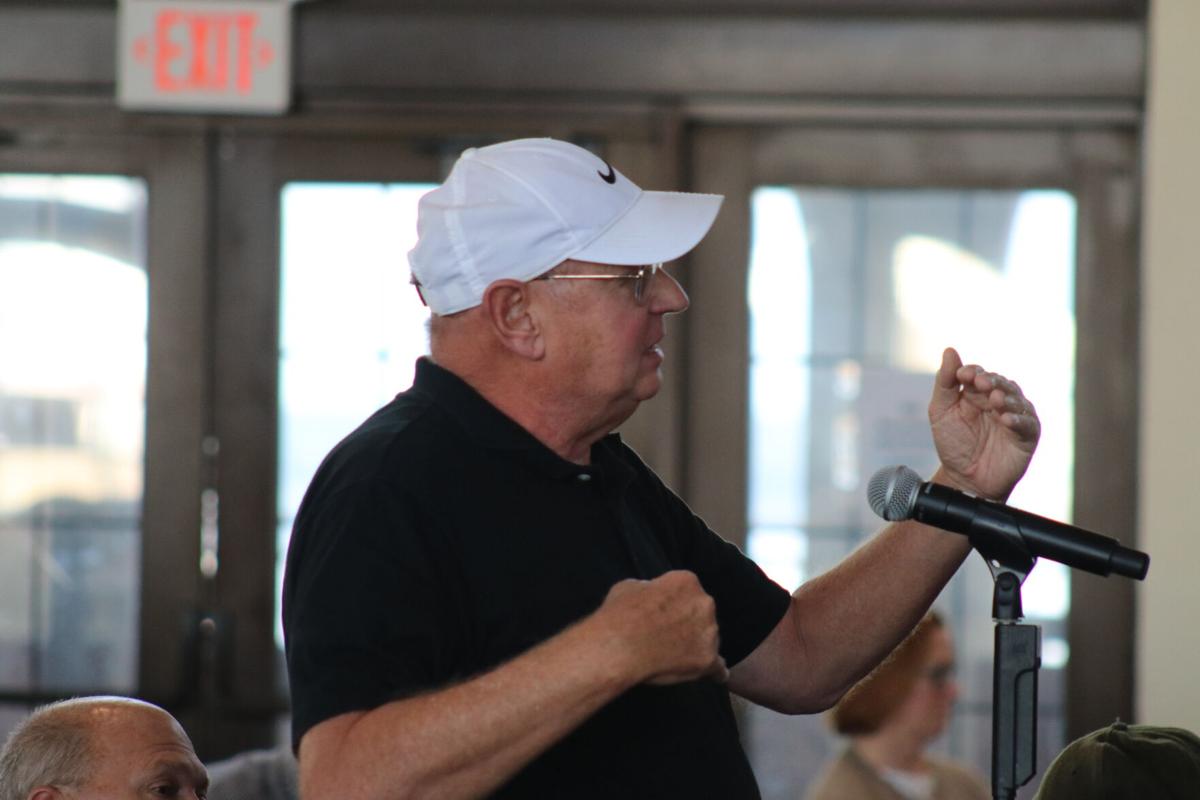 Craig Stuart of Ocean City asks about the local financial benefit of a proposed offshore wind project on Saturday. 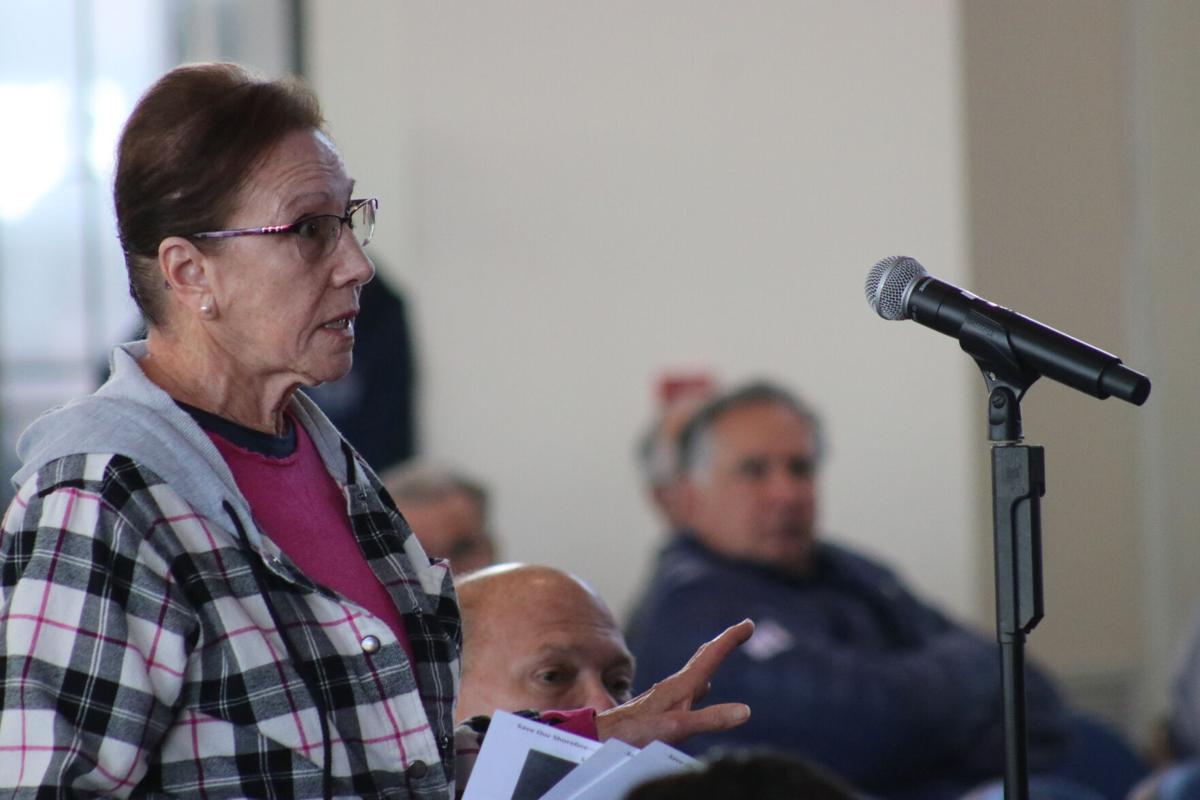 Leona Louderback of Ocean City said she sees nothing good coming from an offshore wind energy plan at a Saturday morning public meeting on Ocean Wind 1 held at the Ocean City Music Pier. 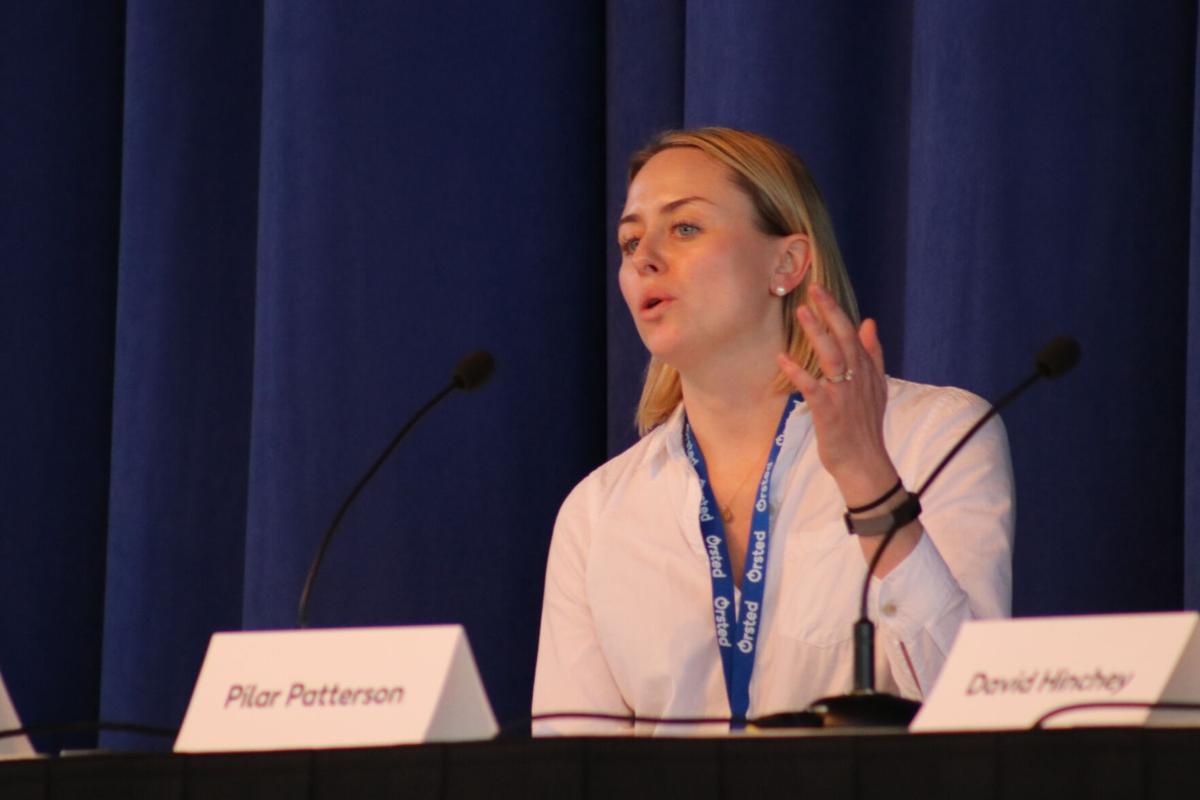 Maddy Urbish, the head of government affairs and policy for Ørsted in New Jersey, addressed several questions at a Saturday morning public meeting on Ocean Wind 1 held at the Ocean City Music Pier. 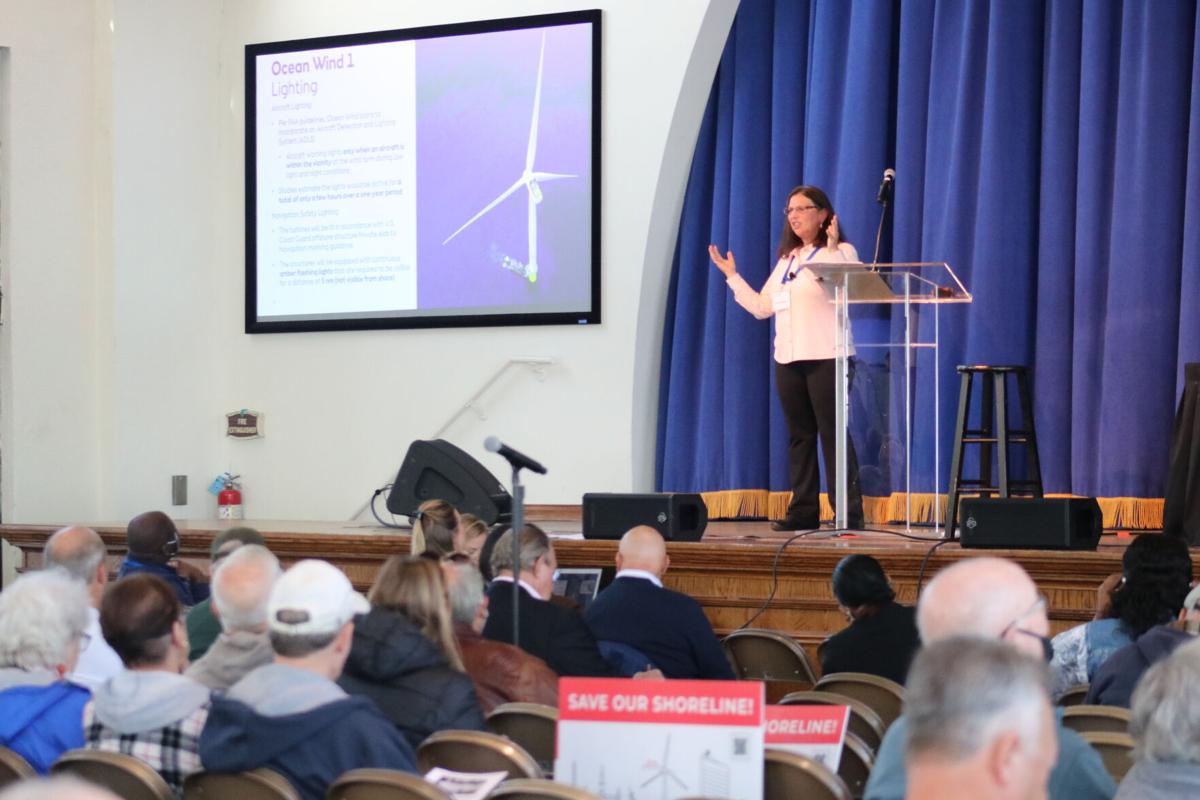 Pilar Patterson, the permit manager for Ocean Wind, talks about lighting for the planned wind turbines as part of a Saturday morning public presentation about the project at the Ocean City Music Pier. 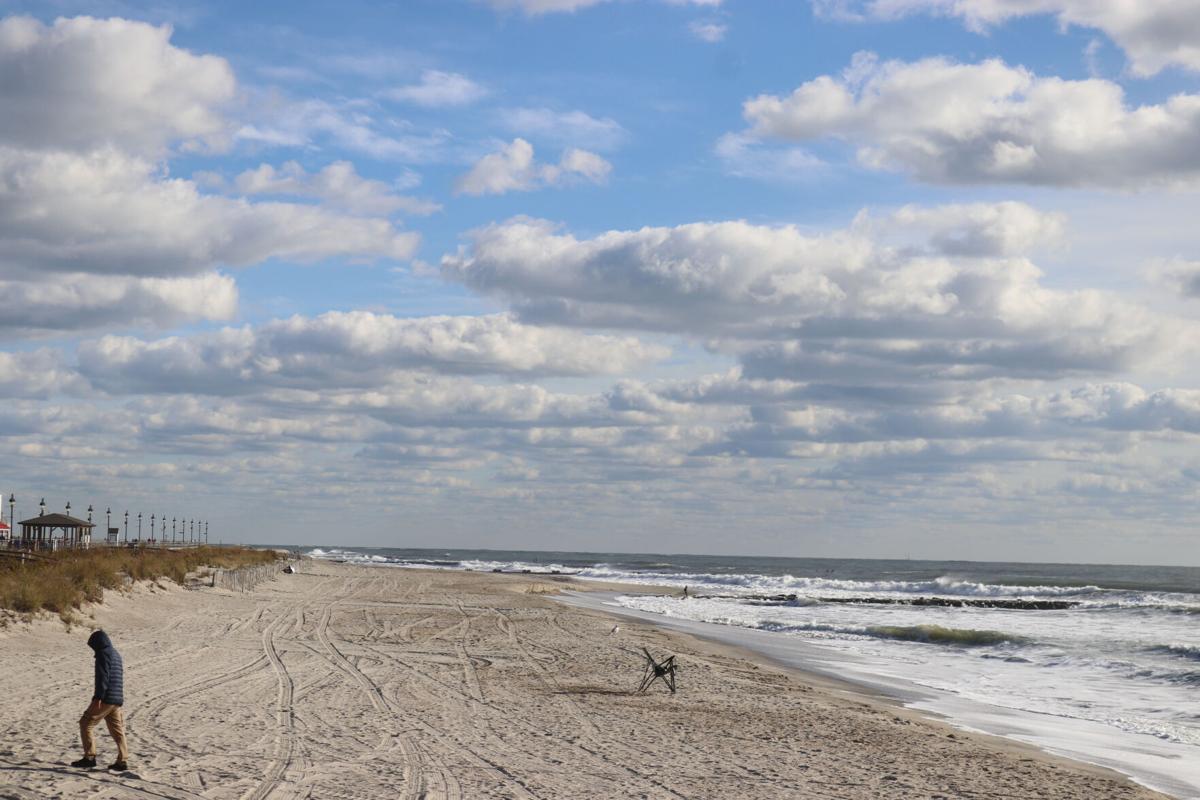 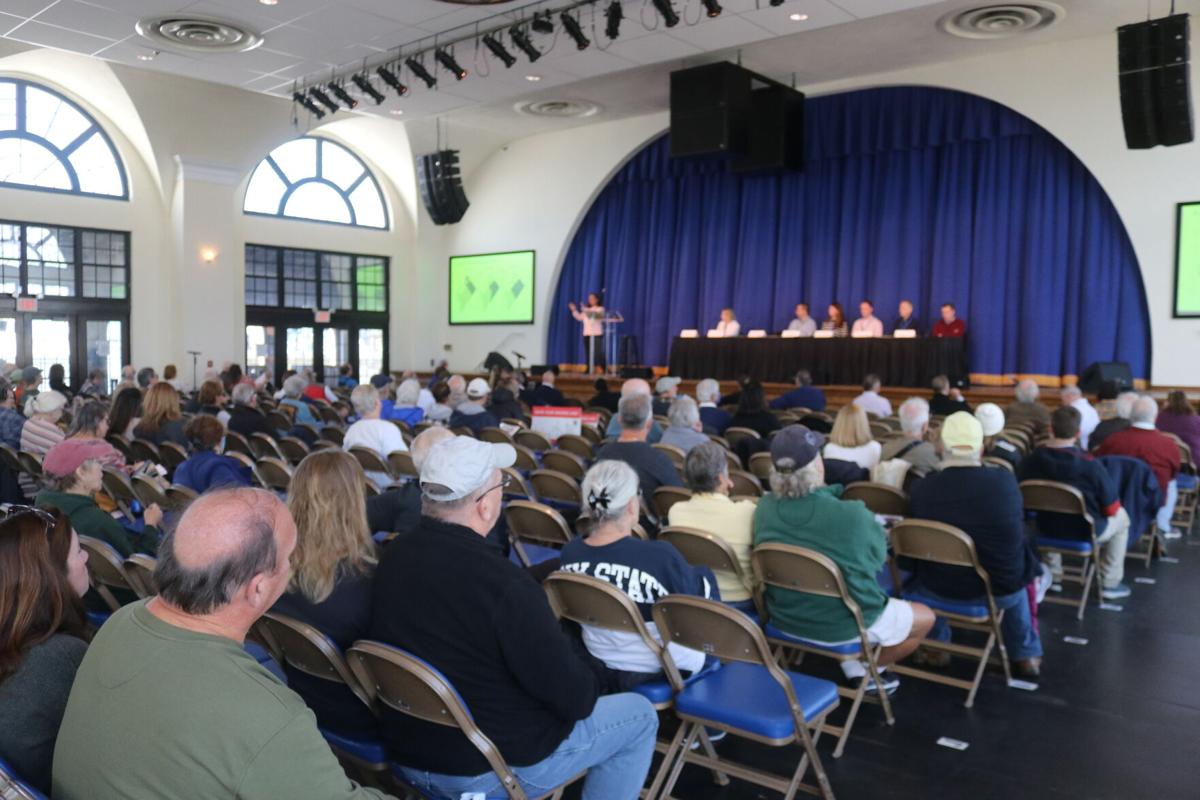 Opponents, supporters and those just curious about plans for offshore wind power in New Jersey attended a meeting Saturday at the Ocean City Music Pier. 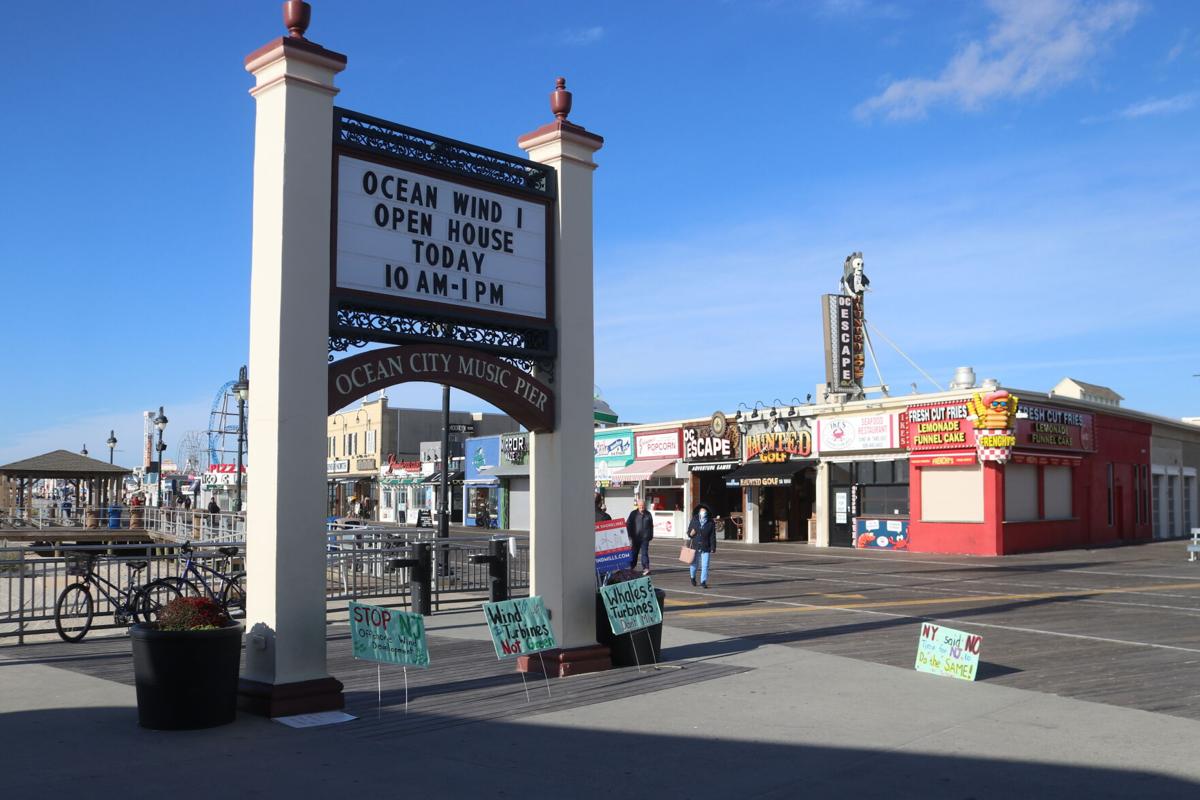 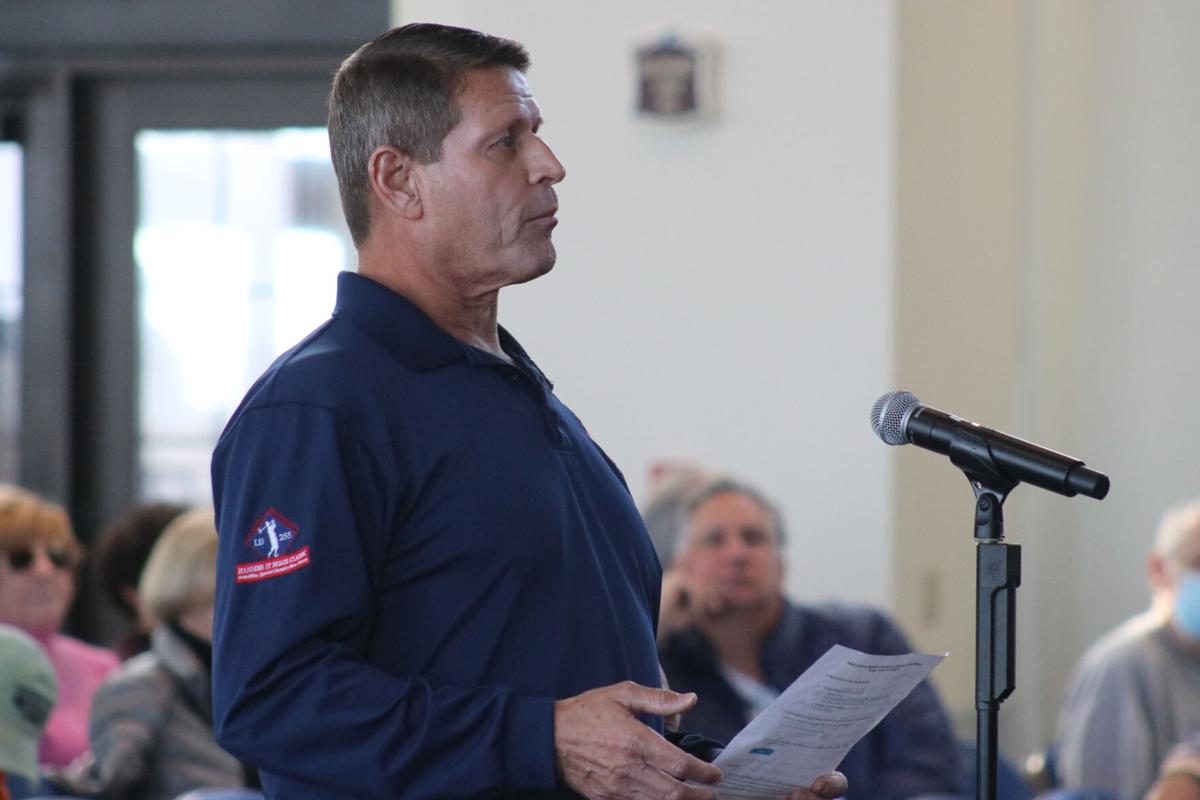 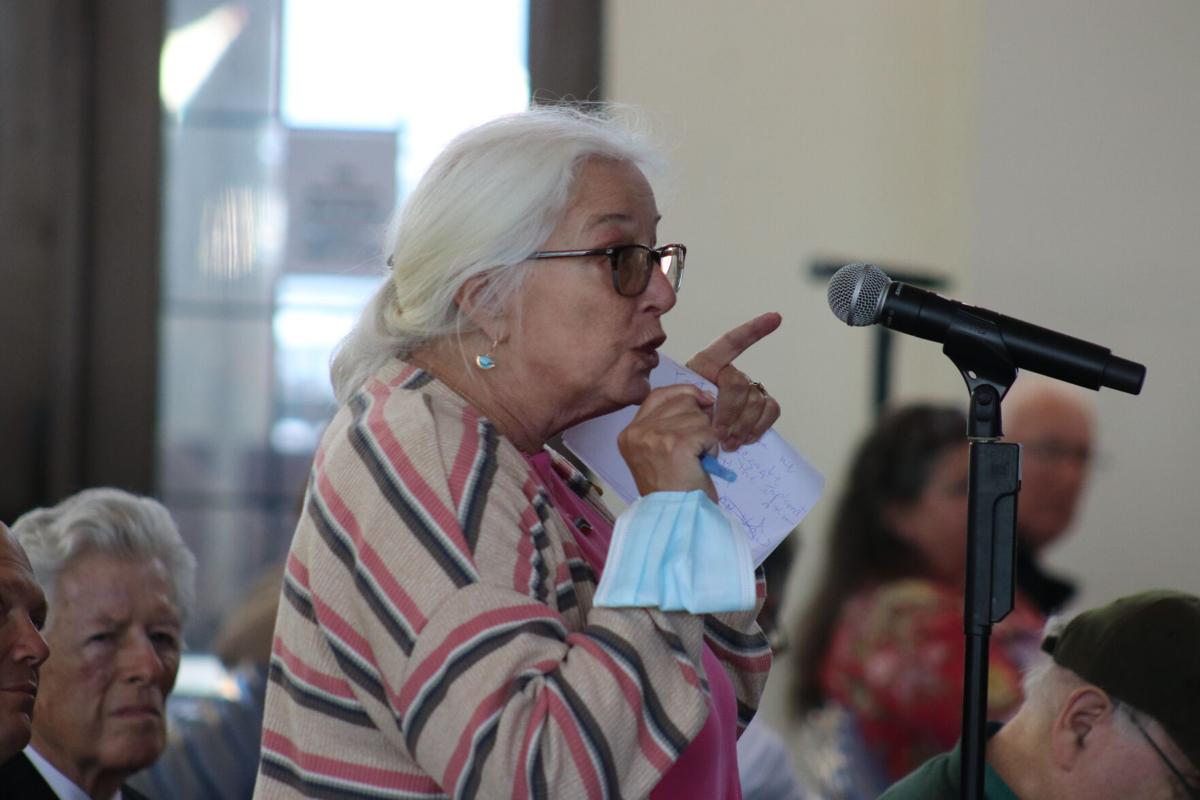 OCEAN CITY — With some in favor, and more opposed, local residents turned out in force Saturday morning for a public meeting on Ocean Wind 1, the furthest along of three offshore wind projects in the works for the New Jersey coast.

More than 200 people attended to hear an extensive presentation on the project from Ørsted staff members and to ask questions. The Danish energy company won a solicitation from New Jersey’s Board of Public Utilities for the first 1,100-megawatt offshore wind farm off the coast, with plans for nearly 100 huge windmills starting about 15 miles offshore.

Opposition to the project has been growing in Jersey shore communities, with opponents raising concerns about the impact on whales and other marine mammals, the potential harm to the local fishing industry and how the windmills on the horizon could hurt tourism, the area’s biggest industry of all.

On Saturday, the talk remained friendly, but the divisions were clear.

“I’ll just say right up front that I am opposed to this project,” said Leona Louderback, of Ocean City. “I see nothing good coming out of it.”

She said the proposal makes no common sense.

A wind-tossed ocean could be seen through the back windows of the Music Pier, while plans, videos and renderings were displayed in the back of the spacious hall on the beach.

Ocean City Councilman Tom Rotondi criticized the proposal, citing a change in state law that will keep the city from blocking the project by denying a right of way to bring a power line through town.

Former New Jersey Gov. James Florio also attended and spoke in favor of offshore wind energy. He added that he has a property in Sea Isle City and has seen offshore wind in operation in Denmark.

He cited sea level rise as reason to support the project, saying it can threaten supplies of fresh water in the region.

“The idea of dealing with climate changes and delivering clean energy as a means of focusing on that is an idea whose time has come. So keep up the good work,” he said.

Labor leaders and business groups at the meeting spoke in favor to the proposal, citing the likelihood of jobs coming to the region.

“We applaud this project. We appreciate the opportunities that it will generate to create well-paying, long sustaining jobs for our members,” said Andrew Bulakowski, the senior counsel representative for the Easter Atlantic States Regional Council of Carpenters. He said he also represents pile drivers and millwrights. The region has lost the nuclear power plant at Oyster Creek and the coal-fired plant BL England, he said, while energy demand remains.

“I think this project will go a long way toward meeting those needs in a clean, efficient and reliable way,” he said.

Opponents of the project, including representatives of groups like Protect Our Coast NJ, had their say, but some in the audience said the organizers were loading the comments in their favor.

“It’s very skewed,” called one woman from the audience.

Representatives of the New Jersey Wind Works campaign, a coalition of environmental and community groups launched this past week to advocate in favor of offshore wind, had a table outside the event, and several speakers from member groups also spoke.

Project opponents questioned that group as well, pointing out that Ørsted made financial contributions to the organization.

Several critics of the project carried signs or had props, including someone with an inflatable whale with “Save Me” written on the side.

Craig Stuart, of Ocean City, asked why the wind turbines could not be moved farther out to sea, out of sight from the beach. He also questioned what benefit the area would receive from the project.

“I’m not talking about a few construction jobs or a few maintenance jobs,” he said.

“I don’t care about that. I want the dollars and cents. I’m a financial person,” Stuart said.

There is an ongoing discussion of providing a benefit to Ocean City for allowing the power lines to cross the barrier island but there were no specifics. As currently envisioned, a power line would cross Ocean City at 35th Street and head up Roosevelt Boulevard to bring the electricity into the power grid at the site of the former BL England power plant in Beesleys Point.

The scope of the project and the size of the available space will mean some of the turbines will be visible from the beach, project officials said.

“We cannot have any construction outside of the leased area,” said Maddy Urbish, the head of government affairs and policy for Ørsted in New Jersey. “We cannot go any further back than 27 miles.”

She said they are as far back as they can be if the project is to generate the proposed amount of energy. The current proposed layout of the turbines balances a number of interests, she said, including allowing enough room between each for fishing boats and other boaters to pass.

Stuart also asked about the potential cost. Ratepayers will pay an average of $1.46 more a month through the expected 20-year life of the project.

Chait spoke about the need for renewable energy, as well as the potential for new jobs and new industry in Atlantic City and elsewhere in South Jersey, while Clarke also had praise for the proposal but some concerns as well.

She stressed the importance of the local fishing industry.

“No one knows the waters like our fishermen. They have real concerns. Our understanding is that they are not being addressed,” she said.

Ørsted representatives said they have a fishing industry liaison and are committed to working with the industry.

Clarke also praised the project for keeping the turbines at least 15 miles offshore, saying they will be difficult to see with the naked eye. She also asked for investments in the local tourism industry to protect businesses and jobs.

Earlier this year, PSEG acquired a 25% equity interest in the original Ocean Wind project. Ørsted has won an additional solicitation for another offshore wind farm to the south, called Ocean Wind 2, while the Atlantic Shores wind project is planned to the north.

Ocean Wind 1 is the furthest along in the regulatory process. The company plans to begin commercial operations by the end of 2024.

Focus on how offshore wind gets built

Ocean City continues to polish its status as the poster child of self-absorbed opposition to clean energy from offshore wind turbines.

The growth of the offshore wind industry in New Jersey could propel the state to its clean-energy goals, and, according to the leaders of one …

Turning the clocks back will mean a sunset in the 4 p.m. hour Sunday, but we won't see much sun anyway. A coastal storm will just miss the shore and while it won't be raining, it will be cloudy. Coastal flooding and breezy winds will be around as well.

Wind power proponents plan to have their say

A group of environmental organizations plans to begin a statewide effort to advocate for offshore wind, with their eyes on Ocean City.

OCEAN CITY — Mayor Jay Gillian has called on regulators to ensure wind turbines could not be seen from the beach, a change that would require …

Opponents, supporters and those just curious about plans for offshore wind power in New Jersey attend a meeting Saturday at the Ocean City Music Pier.

Craig Stuart of Ocean City asks about the local financial benefit of a proposed offshore wind project on Saturday.

Leona Louderback of Ocean City said she sees nothing good coming from an offshore wind energy plan at a Saturday morning public meeting on Ocean Wind 1 held at the Ocean City Music Pier.

Maddy Urbish, the head of government affairs and policy for Ørsted in New Jersey, addressed several questions at a Saturday morning public meeting on Ocean Wind 1 held at the Ocean City Music Pier.

Pilar Patterson, the permit manager for Ocean Wind, talks about lighting for the planned wind turbines as part of a Saturday morning public presentation about the project at the Ocean City Music Pier.

Opponents, supporters and those just curious about plans for offshore wind power in New Jersey attended a meeting Saturday at the Ocean City Music Pier.