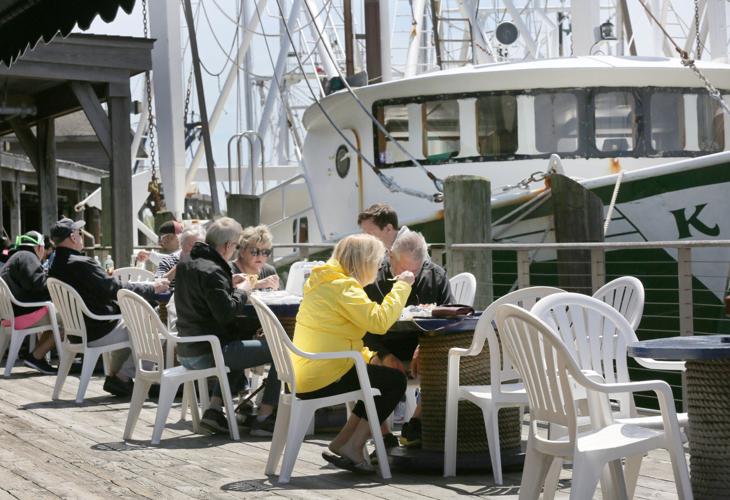 People dine outdoors at the Lobster House in Lower Township, where waits for a table can run more than two hours. 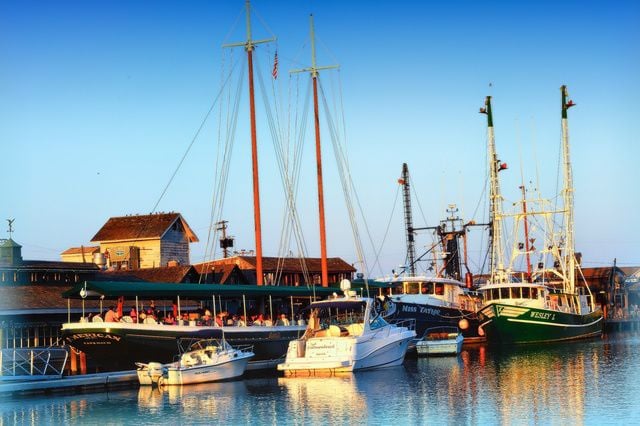 Among the Lobster House’s seating options is aboard a docked schooner, the American. 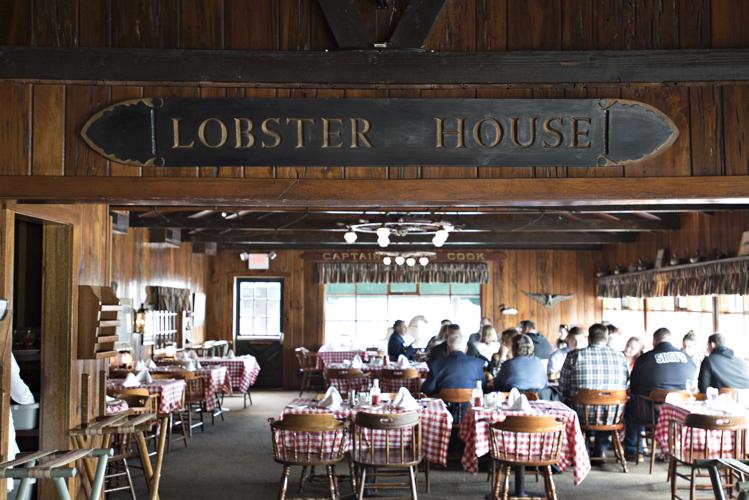 The Lobster House’s two dining halls can seat about 550 people. 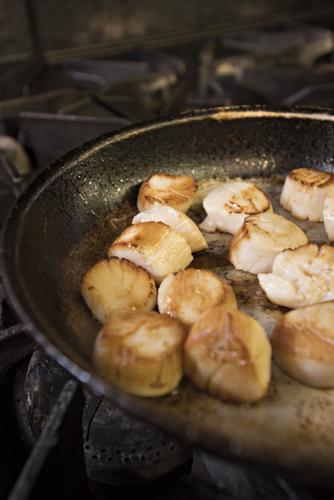 Pan-seared scallops are prepared at the Lobster House in 2018. “I know that we’re only as good as our last meal,” owner Keith Laudeman said.

LOWER TOWNSHIP — The moon was wrapped in fog over Cape May Harbor, like a pearl in an oyster. It was a little after 5 a.m., and air conditioners hummed along the docks on this steamy July morning.

The only light in the Lobster House, it seemed, came from the counter of the coffee shop, where a lone night watchman peered into his laptop as his shift came to a close.

“I wasn’t expecting anyone,” Tony Senteneri said. “Sometimes I think this place is haunted.”

The business, at its bones, hasn’t changed much since the Laudeman family began hauling their catch to the wharf here in 1922, but the volume and size of the operation is mind-boggling today, a century later.

The Lobster House — despite a handful of devastating fires and a century’s worth of hurricanes — floats the way a cruise ship does. According to Restaurant Business Magazine, the restaurant served 320,000 meals in 2020 and brought in $15.4 million, earning it the 62nd spot on the list of America’s Top 100 independent restaurants.

We spent a day there to see how that ship stays on course.

In the Lobster House’s coffee shop, waitress Rita Foss slides the first customer a steaming cup and a glass of ice, while oranges roll down chutes into the mechanical juicer.

Within minutes, a dozen customers are beside him. Talk centers on fishing — they’re hitting pink lures — and what closing time at the bars looked like. Most don’t glance at the menu.

That was three eggs with a choice of meat.

“Grits or home fries with that?” Foss asks.

Joined by his family, Lewis took the oath of office as police chief this month at the reorga…

The coffee shop is mostly locals, Foss said, and while it’s not a secret, people can eat dinner there, too, instead of waiting for a table later in the day.

Outside, by the raw bar, workers are pressure-washing bar mats. Gulls lie in wait for scraps on the roof above them.

Across the hall from the coffee shop, the fish market is arguably the steadiest part of the Lobster House. It opens at 8 a.m., but customers are already inside, wiping the condensation off the glass case to ogle the offerings. Staring at fresh seafood, it seems, is a good way for grandparents to give mom and dad a break on vacation.

Keith Laudeman, 67, is the unassuming captain at the helm of the Lobster House. As owner, he could be surfing in Fiji or fishing for weakfish in Cape May, but instead he spends most of his days the way he spent most of his life: at the restaurant and adjacent Cold Spring Fish & Supply.

“Ah, I don’t mind doing work,” he said, shoveling ice into a bin at the fish market that morning. “Everybody talks about me retiring but me.”

Fun, food and music on Landis Ave in Vineland

VINELAND — Games, music and food — lots and lots of food — drew thousands to a closed-off se…

As a former scallop fisherman, Laudeman has a love for the market. Most of the scallops are local, unloaded from the boats up the pier. One of them, the Susan L, is named for his wife; the Vaud J in honor of his grandmother.

Laudeman has a rule for oysters and clams behind the raw bar. He wants them buried in ice, all day.

“His saying is ‘No shell shall show,’” bartender Katie Salasin, 43, said while shucking oysters.

Customers wandered around the deck, looking out at pricey boats and multimillion-dollar waterfront homes in Cape May.

“You’re six minutes early,” she tells a patron looking for a beer.

The Lobster House’s schooner, dubbed the American, is one of its most popular locations. The boat is a steel replica of the original wooden schooners, also named American, that docked there over the century.

Getting a seat there, particularly at the bar at the bow, is a hot commodity, and 20 waited in line to get on before noon.

“Folks, we’re going to get everybody aboard in a minute,” the hostess said.

Every seat is filled out on the dock, and the occasional gull raids a customer carrying food from the takeout window.

‘I can be the vice president, like her:’ Girls weigh in on Kamala Harris making history

Aryiane Hill, 12, of Atlantic City, watched the presidential inauguration Wednesday with her mom.

“Oh my God, it fluttered in my ear,” one woman said, moments after screaming.

The first customers arrive for dinner, about 50 minutes early. By 4 p.m., the line is out the door of the Lobster House’s dark, iconic bar. Waiting for a table there is as much a summer tradition in Cape May County as catching sand crabs and reading banner planes.

The Lobster House doesn’t take reservations, Laudeman said, “because we never have.”

The two dining halls can seat approximately 550 people, but sometimes the wait can extend over two hours.

“I’m behind you,” boiler cook Joseph Fulton yells out while moving a tray of crab imperial from the oven.

“Behind” is the most important word at the Lobster House, the easiest way for waitstaff, cooks, bussers and everyone else to let others know they’re walking behind them with hot soup or a tray full of wine glasses.

The kitchen is hot and raucous. The Lobster House is known for staples like stuffed flounder. Longtime customers, Laudeman said, will notice the slightest change in ingredients.

“I know that we’re only as good as our last meal,” he says.

From her perch behind the hostess station out in the Lobster House’s main lobby, Tina Wood, 55, spends a full hour taking names and numbers.

Most people are relieved at a 45-minute wait time, Wood said. They frown if it’s over an hour. Wood invites them to walk around the dock and grab a drink. She tells parents to go look at the lobsters or the boats.

“The key is to let them know it’s not the end of the world,” she said during a break. “You will be seated, eventually.”

The Lobster House stops seating for dinner at 10 p.m., but the dining halls are are ebbing. Outside, on the dock, party boats filled with bachelorette parties cruise the harbor. Children doze off while their parents finish their crabs.

At the coffee shop, two customers remain. The fish market is empty, and the crew is cleaning up. There’s not much seafood left.

Allen, 37, took 400 phone orders this Saturday. In October, she’ll be getting married at the Lobster House.

Tony Senteneri, the night watchman, was back for his shift. In the coffee shop, a waitress erased the day’s special from the chalkboard.

“I need a foot massage,” she said.

The fish market was dark. Workers were setting tables for Sunday in the dining hall. Gulls still looked for scraps and found none.

High tide lifted the schooner American up by the dock and brought in the first waves of silence until the Lobster House came back to life Sunday morning.

People dine outdoors at the Lobster House in Lower Township, where waits for a table can run more than two hours.

Among the Lobster House’s seating options is aboard a docked schooner, the American.

The Lobster House’s two dining halls can seat about 550 people.

Pan-seared scallops are prepared at the Lobster House in 2018. “I know that we’re only as good as our last meal,” owner Keith Laudeman said.