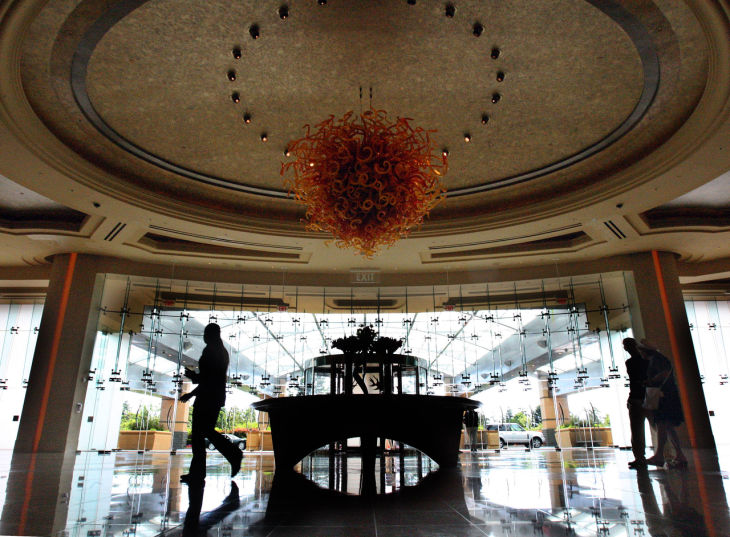 A view of the hotel lobby at the entrance to the Borgata. Borgata will mark its 10th anniversary on July 2. Monday June 24, 2013. (Dale Gerhard/The Press of Atlantic City) 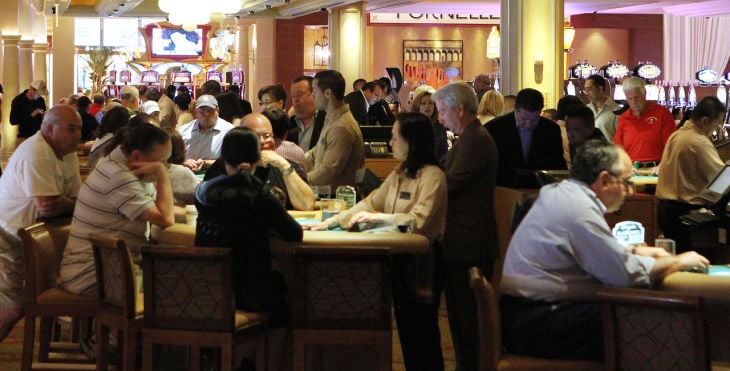 Gamers play at the tables in the casino at the Borgata. Borgata will mark its 10th anniversary on July 2. Monday June 24, 2013. (Dale Gerhard/The Press of Atlantic City)

On July 2, 2003, Atlantic City welcomed Borgata Hotel Casino & Spa, an upscale megaresort that was supposed to appeal to wealthier customers who had previously shunned the gambling scene.

There was even a new phrase coined for those customers: the Atlantic City "rejectors."

"Borgata was looking to provide something different - a trade-up experience," said Joe Lupo, the casino's senior vice president of operations.

Now, as Borgata prepares to celebrate its 10th anniversary, its mix of South Beach hipness and Las Vegas-style glitz has allowed it to remain the city's dominant casino.

"Borgata brought excitement, food and beverage attractions, and all different aspects into the market in a big way - and the other casinos are still chasing that," said Bob McDevitt, president of Local 54 of UNITE-HERE, the city's biggest casino union.

"It changed the conventional wisdom of what it meant to be a successful casino," he said.

Without Borgata, Atlantic City may have been smothered by the competition brought on by the explosive growth of casino gambling in surrounding states in recent years, particularly Pennsylvania, McDevitt said.

"I think Atlantic City would be much more devastated by Pennsylvania gaming if Borgata was not in this market," he said.

Overall, the Atlantic City market has plunged more than 40 percent, from a peak of $5.2 billion in gambling revenue in 2006 to $3 billion last year. Even the powerhouse Borgata has not been immune to the competition from Pennsylvania and the lingering effects of the sluggish economy. Its Atlantic City-leading gambling revenue fell 6 percent last year to $612.7 million.

Lupo stressed that Borgata is still growing its share of gambling revenue among the city's 12 casino hotels. He also said Borgata continues to freshen up its product, including a $50 million refurbishment last year of its main 2,000-room hotel tower, to attract more customers.

"When Borgata spends $50 million on its room product, it shows that we're here to stay," Lupo said.

Borgata's mastermind and former CEO Bob Boughner and his development team crafted an entirely different type of Atlantic City casino, a Las Vegas-style megaresort. They wanted to draw well-heeled customers who clamored for posh shops, restaurants, nightclubs and spas. But the challenge was to overcome perceptions that Atlantic City was a second-rate daytripper market dominated by aging, penny-pinching gamblers.

"The Atlantic City rejectors were going to Las Vegas instead of Atlantic City," Lupo said. "Our goal, without question, was to drive new business to the market as a whole."

Inna and Daniel Lapin, a couple in their late 30s from Manalapan, Monmouth County, said Borgata blends its resort atmosphere with contemporary attractions that appeal to people their age.

"It's sort of a hip and trendy take on casino life without having to travel to the West Coast to get it. There's a certain air about this place when you walk in," Inna Lapin said.

"It feels resort-like, as opposed to other casinos, which just feel like a casino," Daniel Lapin added.

Overall, Borgata's Las Vegas-based parent company, Boyd Gaming Corp., has invested about $2 billion in the casino hotel since its opening. Built at an initial cost of $1.1 billion, Borgata was so successful from the start that planning began just months later on what would be a major two-phase expansion.

The first part of the expansion, a $200 million project that opened in 2006, added new casino space, the city's biggest poker room and new gourmet restaurants headlined by celebrity chefs Wolfgang Puck and Bobby Flay. Lupo said Puck's and Flay's places helped tcreate an up-market dining atmosphere in Atlantic City at that time, and they remain among the most successful casino restaurants in town seven years later.

Hoping to make Borgata even more of a resort-style attraction, Boyd built the $400 million Water Club in 2008. The ultra-luxe boutique hotel features 800 rooms and is trimmed in gold-hued glass to match the look of Borgata's main hotel tower. Inside, the Water Club boasts opulent decor and a lavish "spa in the sky" offering panoramic views of the bay and ocean from the 32nd floor. Guests also have their pick of five heated indoor or outdoor pools.

Gail and Lee Mescolotto spent part of a leisurely day splashing around in one of those pools. Accompanied by their adult children, the Mescolottos were staying at Borgata for three nights to celebrate their 47th wedding anniversary. They said Borgata is the only Atlantic City casino they visit.

Gail Mescolotto said she and her husband split their vacation time between Borgata and the Bahamas. She said Borgata's upscale surroundings initially attracted them to the property and are a big reason they continue to come back.

"The property is very beautiful," she said.

While a 70-ish couple such as the Mescolottos call Borgata their home casino, the property has also catered to a younger customer base by offering cutting-edge entertainment and contemporary artists to fill the nightclubs and concert halls. Borgata quickly established itself as a leader in casino entertainment by featuring headliners such as Billy Joel, Bon Jovi, Eric Clapton, Mariah Carey and Jerry Seinfeld.

When your job title is “babe,” you can expect your employer to have something to say about your weight.

The Borgata Babes’ long-running days in court may not be over yet.

A view of the hotel lobby at the entrance to the Borgata. Borgata will mark its 10th anniversary on July 2. Monday June 24, 2013. (Dale Gerhard/The Press of Atlantic City)

Gamers play at the tables in the casino at the Borgata. Borgata will mark its 10th anniversary on July 2. Monday June 24, 2013. (Dale Gerhard/The Press of Atlantic City)