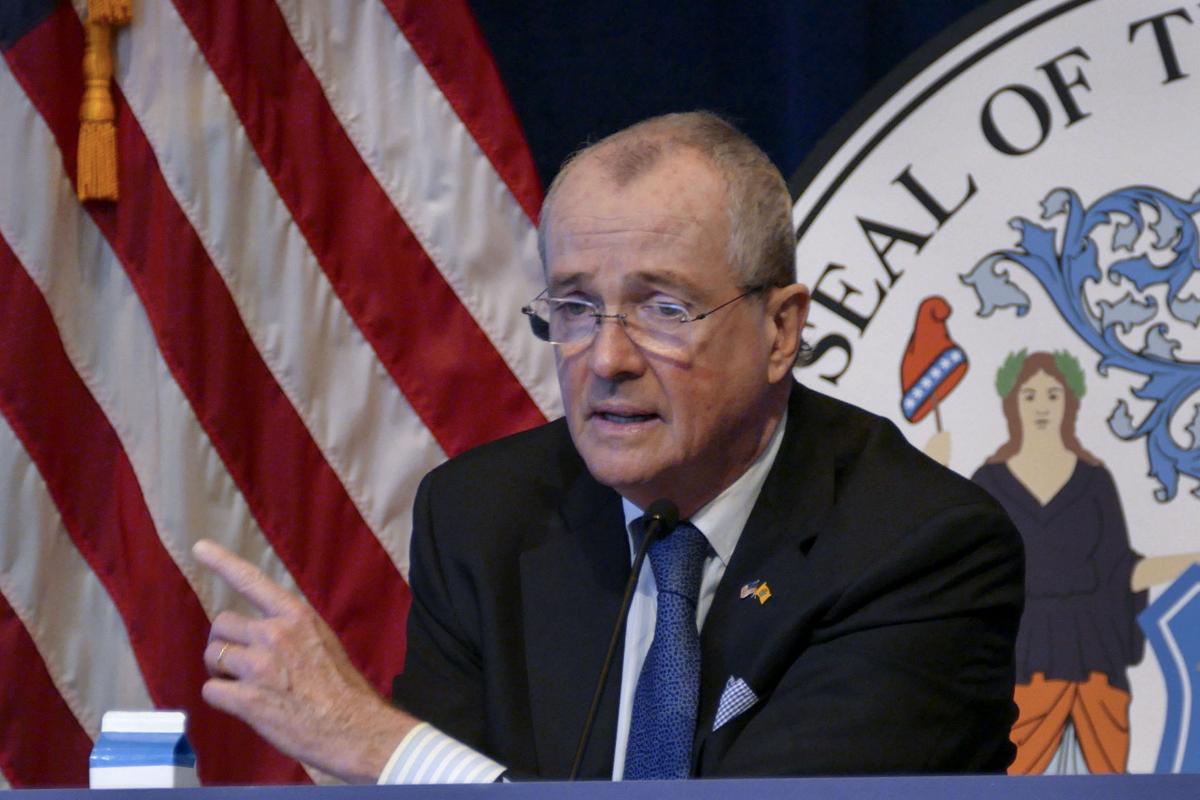 Gov. Phil Murphy holds a coronavirus media briefing in May. 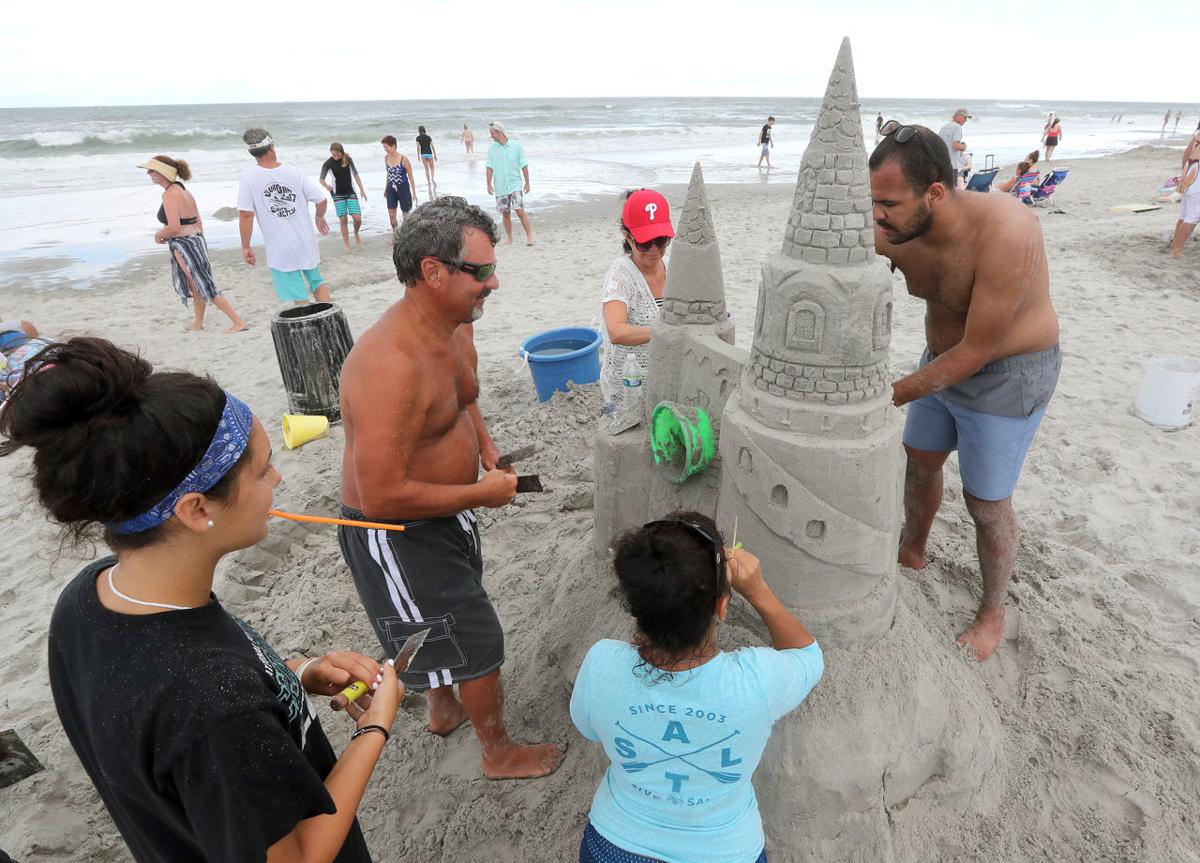 Tom Jones (center left) of Ambler, Pa. along with friends a family, work on his castle of sand in Brigantine. The 9th Annual Ashore Realty Amateur Sand Castle Building Contest took place on Saturday, Aug. 4, 2018, in front of the Laguna Restaurant on the 14th street south beach in Brigantine. Over $2500 in trophies, gift certificates, prizes and ribbons were awarded. The event featured music, Bubble Beach for the kids, a hula hoop contest and more! (Dale Gerhard/Press of Atlantic City)

The order goes into effect at 6 a.m. Sunday.

“We are confident in taking these steps for getting our state on the road back for the same reason that we have been able to take the other steps that we’ve announced over the past few days to restart our economy and begin our recovery,” Murphy said during his daily COVID-19 briefing, “because the data says that it is possible.”

As part of the order, social distancing and sanitation must be maintained, and passenger and customer logs must be preserved.

“It was huge that they opened everything up,” said Chris Tabasso, a captain at Atlantic City’s Highroller Fishing, “because if they didn’t open this up, we’d lose the season. We’re going to be reduced, most likely, but it’s better than nothing.”

Tabasso said the order came just in time for summer flounder season, which begins May 22 and ends Sept. 19. It is the company’s busiest time of the year.

The number of hospital-

All but two counties, Cumberland and Salem, have seen doubling rates slow to at least 30 days.

“Nearly every county can now count the rate of doubling in terms of months and not weeks,” Murphy said, “and that is a really good improvement.”

As of Saturday, Cumberland’s doubling rate was every 18 days. Salem’s was every 28.5.

Brigantine officials on Friday announced that beaches will reopen for swimming and sunbathing May 22.

Normal Social distancing procedures and masks should be worn by all, according to a news release from the city. Families are permitted to congregate in groups, up to 10 in size and couples may sit together. Swimming is permitted at guarded beaches only.

Lifeguards will be on the beaches at Roosevelt Boulevard, 16th Street, 26th Street and 38th Street only for the beginning of the season, according to the release.

In addition, this year’s Memorial Day parade and ceremony have been canceled, according to the release. The city-wide Memorial Day Weekend yard sales are permitted, providing that social distancing and face coverings are used.

The prohibition of occupancy on short-term rentals is also remaining in effect for the time being, according to the release. It is evaluated regularly and officials will update residents as needed.

Middle Township on Friday held a “surprise in the skies” for medical workers.

The township scheduled a flyover at multiple health facilities. The plan carried a banner reading “Thank You! We Love Our Healthcare Workers.”

The event was originally scheduled for last Friday to coincide with Nurses and CNAs Appreciation Week, but rain kept the plane grounded.

Gov. Phil Murphy today on Friday signed legislation authorizing the sale and delivery of alcoholic beverages by the holders of certain retail consumption licenses and concessionaire permits during the COVID-19 state of emergency.

“New Jersey’s restaurant and hospitality industry, like so many other businesses, has suffered tremendous financial losses due to COVID-19,” Murphy said. “Allowing business owners with certain licenses and permits to sell beverages directly to consumers is a creative way to alleviate some of their financial uncertainty.”

“Allowing restaurants to expand their opportunities to serve their customers will generate the much needed revenue they need,” said Marilou Halvorsen, president and CEO of the New Jersey Restaurant & Hospitality Association. “We appreciate the bill sponsors, legislature, and Governor’s support on this bill.”

The bill would expire six months following the date: (1) on which the state of emergency has ended; or (2) on which the coronavirus-related occupancy or customer seating restrictions no longer apply to the licensed premises, whichever occurs later.

A Hamilton Township auto repair shop is continuing to offer free oil changes for first responders through the month amid the COVID-19 pandemic.

“We at Kneble’s Auto Service Center would like to offer our sincere thank you for all the hard-work you are doing during this global pandemic,” according to a news release from the business. “During these unprecedented moments, it is crucial we all come together to fight for our health, safety, and economic security. While you put your life on the line for us every day, it is the least we can do to make sure your car is up and running.”

Through May, Kneble’s Auto is partnering up with Auto Parts Warehouse, Wix and Valvoline to continue offering free oil changes to those in the police department, fire department, EMS and all essential healthcare workers, according to the release. When responders make and appointment, their name will be added in the race for a $500 Visa gift card, drawn at the end of the month.

All it takes is three easy steps:

Schedule an appointment via telephone (609)625-3286, or online kneblesauto.com

Have your employee ID card available at the time of the appointment and,

Bring in your vehicle registration

State officials scheduled a 1 p.m. briefing Saturday to update residents on the spread of COVID-19.

It will be livestreamed here.

For most people, the new coronavirus causes only mild or moderate symptoms, such as fever and cough. For some, especially older adults and people with existing health problems, it can cause more severe illness, including pneumonia.

Crowds flock to the A.C. Boardwalk and beach

Crowds flock to the A.C. Boardwalk and beach

It looked like any other crowded Saturday as residents and visitors geared up for summer on Ocean City’s Boardwalk and beaches.

A new law will expand eligibility for college loans and grants through the state government for students impacted by COVID-19.

Middle Township makes best of it with Front Porch Prom

GALLOWAY TOWNSHIP — Instead of walking across the stage at Jim Whelan Boardwalk Hall to accept her diploma, Alay’ziah Haraksin was seated at h…

Gov. Phil Murphy holds a coronavirus media briefing in May.

Tom Jones (center left) of Ambler, Pa. along with friends a family, work on his castle of sand in Brigantine. The 9th Annual Ashore Realty Amateur Sand Castle Building Contest took place on Saturday, Aug. 4, 2018, in front of the Laguna Restaurant on the 14th street south beach in Brigantine. Over $2500 in trophies, gift certificates, prizes and ribbons were awarded. The event featured music, Bubble Beach for the kids, a hula hoop contest and more! (Dale Gerhard/Press of Atlantic City)