A Superior Court judge’s law clerk who used the recent death of a New Jersey State trooper to mourn a dead deer has resigned.

Anderson submitted the resignation Wednesday and it is effective immediately, Comfort said. Anderson was initially suspended Tuesday for two weeks with pay, pending the outcome of an internal investigation, said Comfort.

Anderson posted that Raspa’s death was “Not that sad, and certainly not ‘tragic,’”.

Raspa was killed Saturday after hitting a deer while patrolling eastbound Interstate 195 at 12:48 a.m. Police said Raspa’s vehicle ran off the right side of the road and into some trees. After the crash, Raspa was taken to CentraState Hospital in Freehold, where he was pronounced dead. Raspa’s funeral is Thursday morning in Middlesex County, police said.

Chris Burgos, president of the New State Troopers Fraternal Association called the resignation appropriate. Burgos called on the courts Tuesday to act swiftly in punishing Anderson for her conduct in connection to the Facebook posts.

Burgos called the paid suspension issued by Francis the day before a vacation for Anderson.

In a letter to Acting Administrative Director of the New Jersey Courts Glenn A. Grant, Burgos wrote “under these circumstances, it is clear to me that Ms. Anderson, as an officer of the court, has violated the code of conduct and ethics that is required as part of her employment.”

In one of Anderson’s Facebook posts on the New Jersey News 12 page she wrote “Only in America is this considered a tragedy.”

Anderson also posted, “Nonetheless, I agree that it is sad and heart wrenching for the family members left to suffer the consequences of the Trooper’s recklessness — especially for the deer family who lost a mommy or daddy or baby deer.”

The Facebook posts by Anderson included: “The ‘victim’s’ employment as a state trooper is irrelevant to the circumstances, other than the fact that he injured a fellow trooper and destroyed state property as a result of his recklessness,” she allegedly said. “He wasn’t running into a burning building or otherwise acting within the course of his employment at the time of the accident. The outcry and ‘thank yous’ are absurd, nonsensical, and completely unwarranted. There are people in this country and around the world dying for much less. There is nothing ‘tragic’ about this. Get over yourselves and your sense of entitlement, people,” .

Burgos’ letter called on Grant to make a decision about the future of Anderson’s employment and alleged that a person that “spews as much hatred as Anderson has done regarding the line of duty death of a NJ State Trooper can no longer be entrusted to be an impartial officer of the court, and subsequently must be removed from any assignment or post with such accountability.”

“Obviously greater minds prevailed here and there was a realization she is not fit to hold this position,” Burgos said Wednesday evening as he attended Raspa's wake in Middlesex County.

“She had to be held accountable to the highest level and standard of professional conduct, and ethical standards, for without such accountability for these actions,” he said. 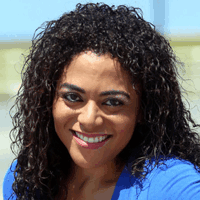 I have been a reporter with the Press since January 2007. I am a recent recipient of a fellowship through the American Society of News Editors Minority Leadership Institute. I am a graduate of the University of Pittsburgh and a graduate student.

Nearly $100,000 in rings stolen from Artisan's Alcove in Cape May

Nearly $100,000 in rings were stolen from jewelry store Artisan's Alcove in Cape May yesterday afternoon in an elaborate caper, the store's ma…

No bicycle bell leads to drug bust in Bridgeton

BRIDGETON — City police said they stopped Willistin C. Jamison III on Monday afternoon because he didn’t have a ringy bell or any other noisy …

A New Jersey law clerk was suspended after Facebook comments she made on a story about a state trooper's fatal car crash upset people. Should she have been suspended?