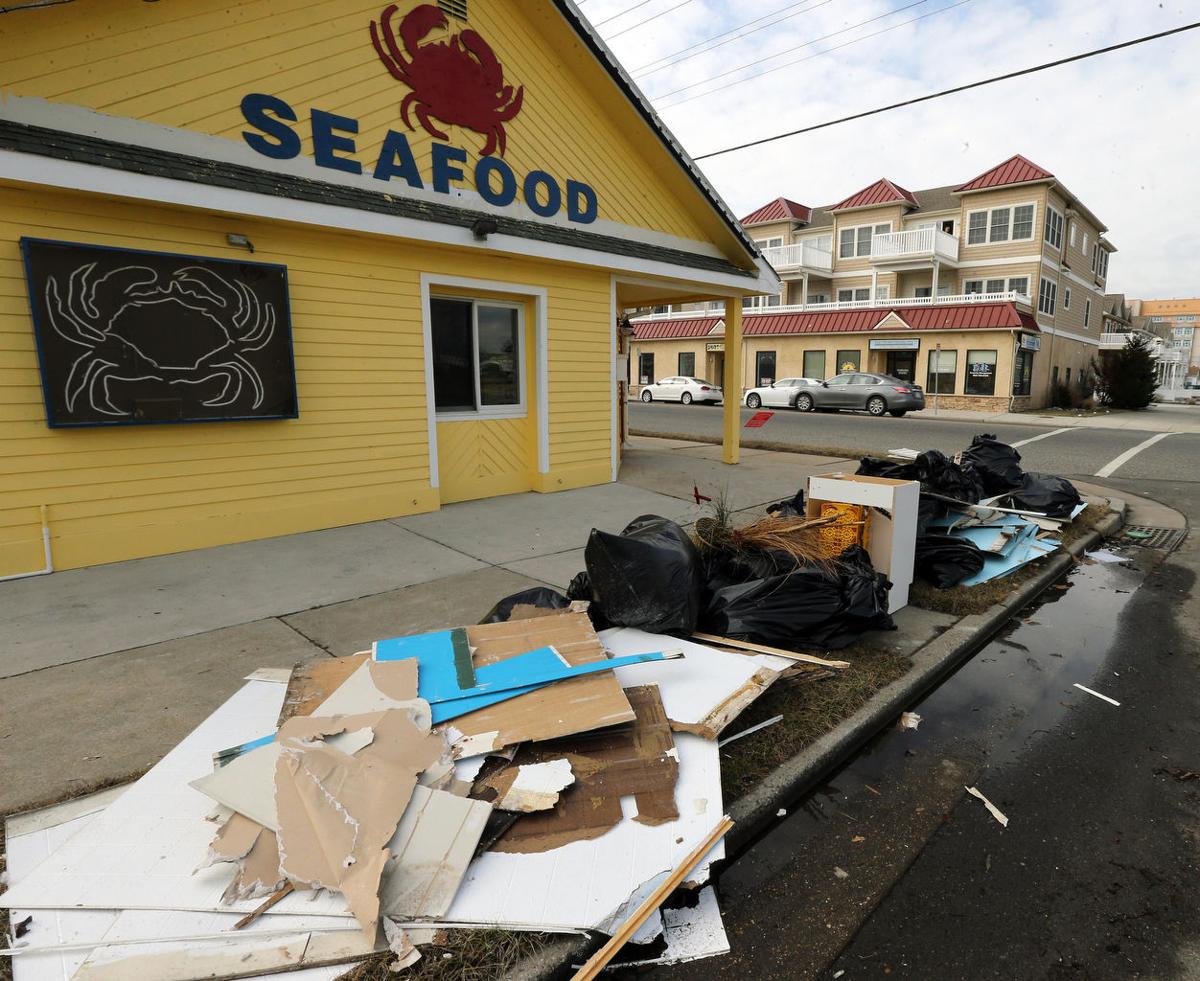 Debris from a flood damaged seafood market caused by the record flooding of Winter Storm Jonas, sit on the curb at 6th and New Jersey Ave in North Wildwood. Friday Jan. 29, 2016. (Dale Gerhard/Press of Atlantic City) 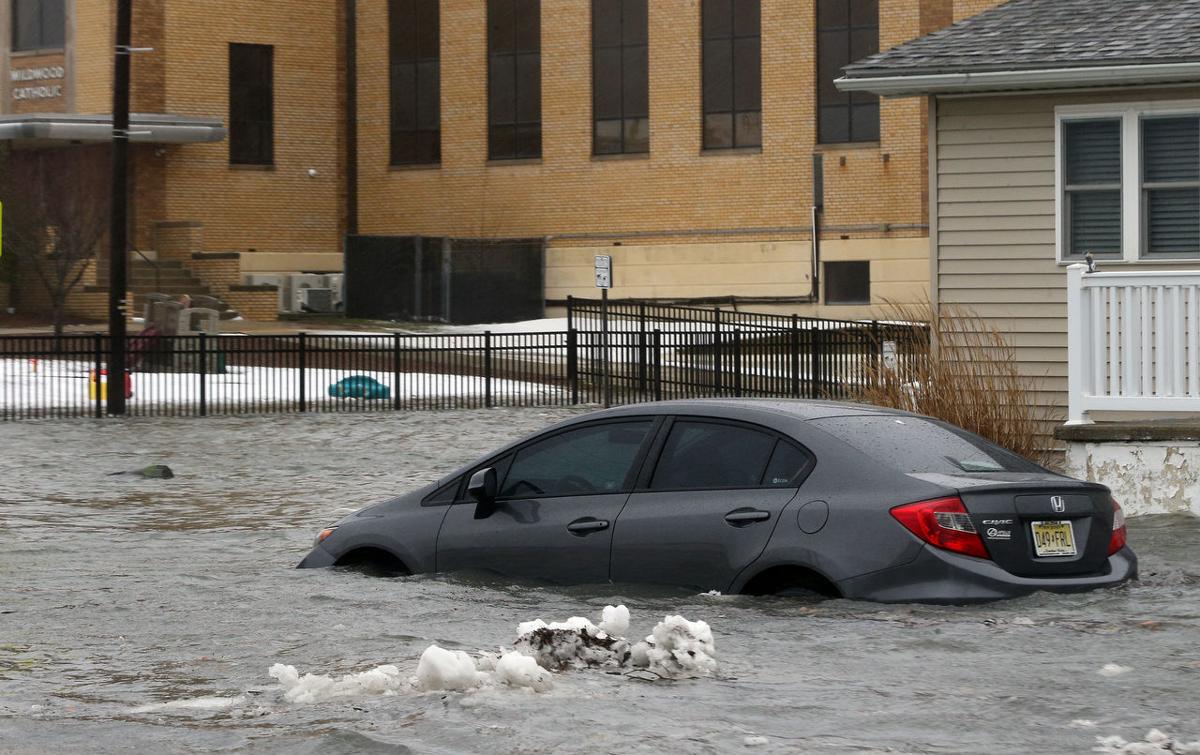 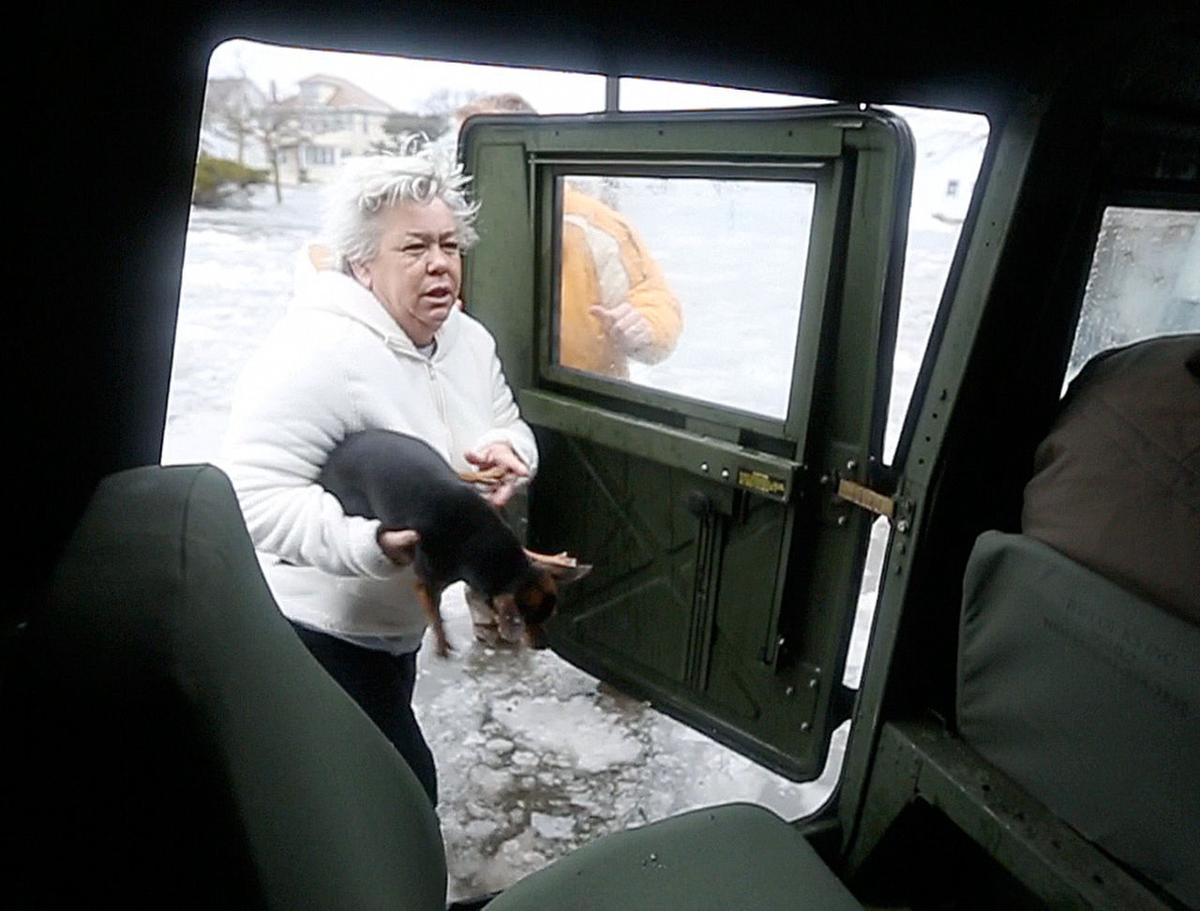 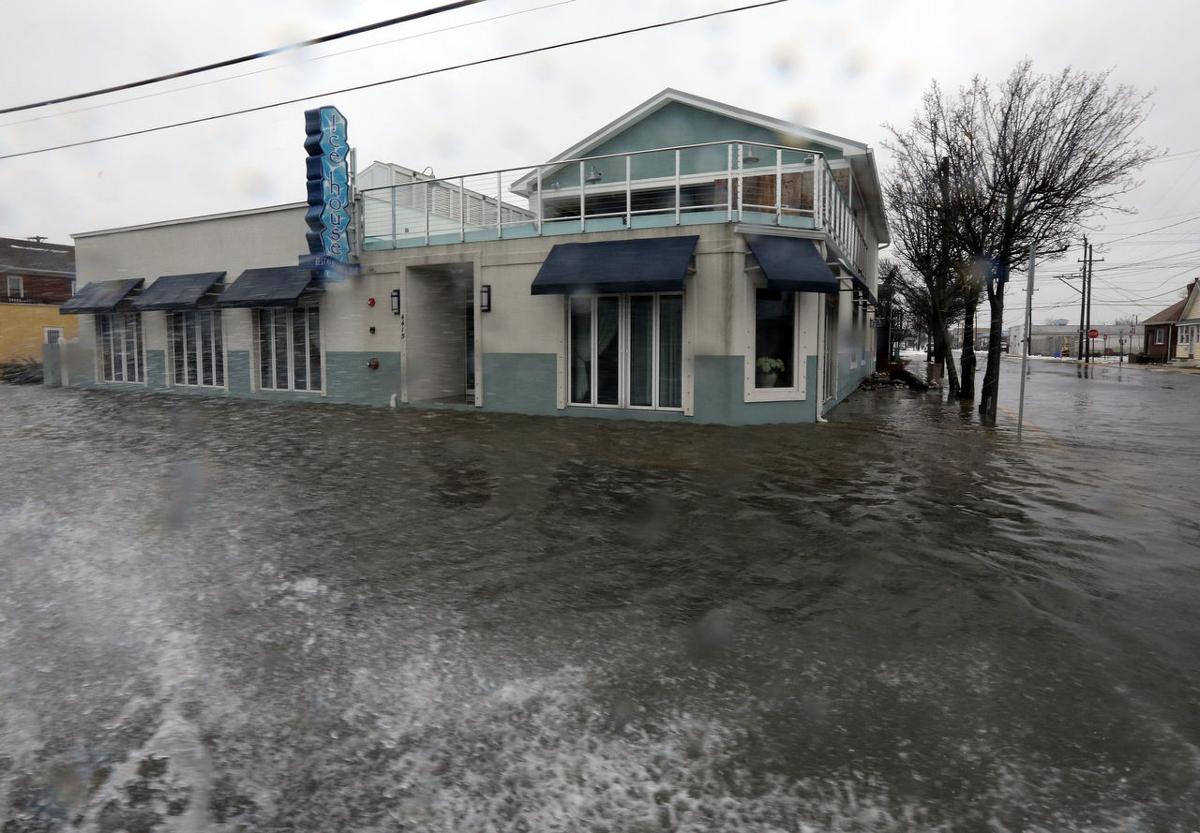 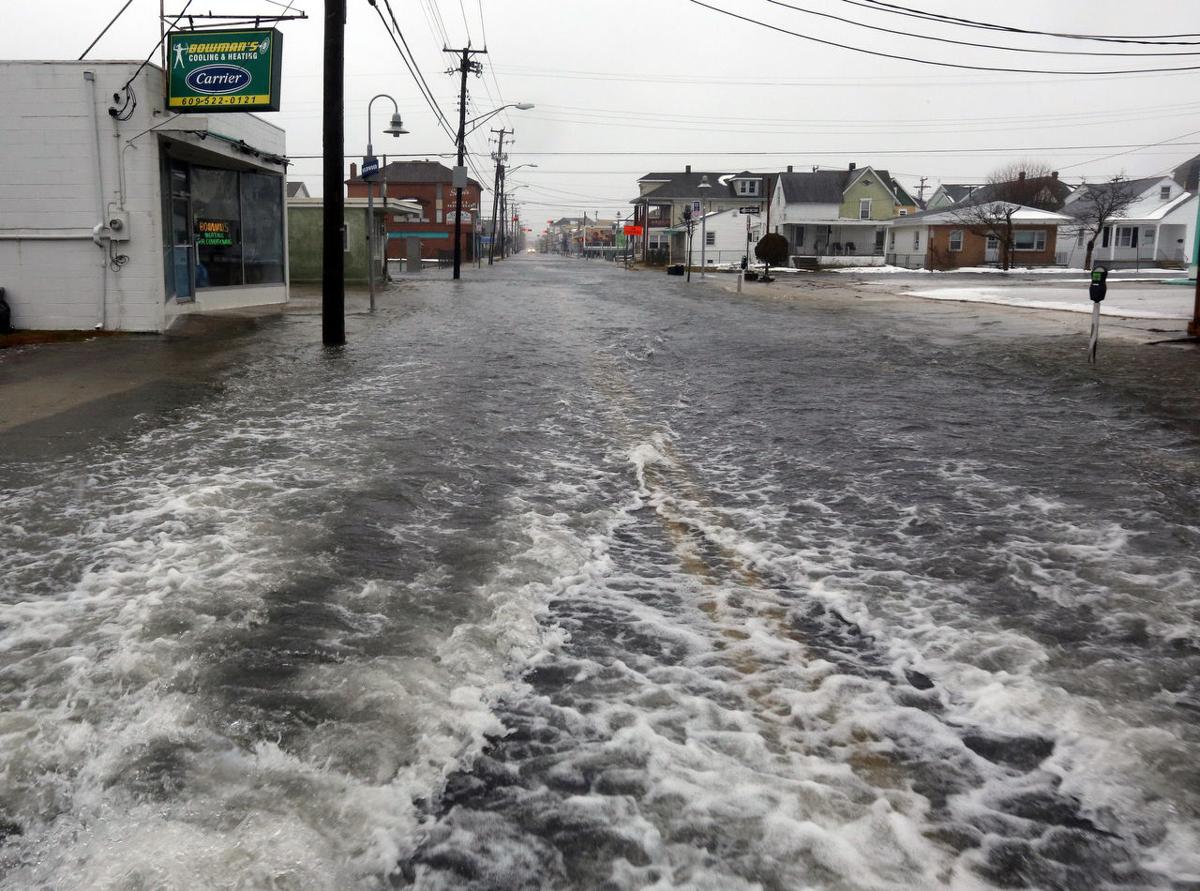 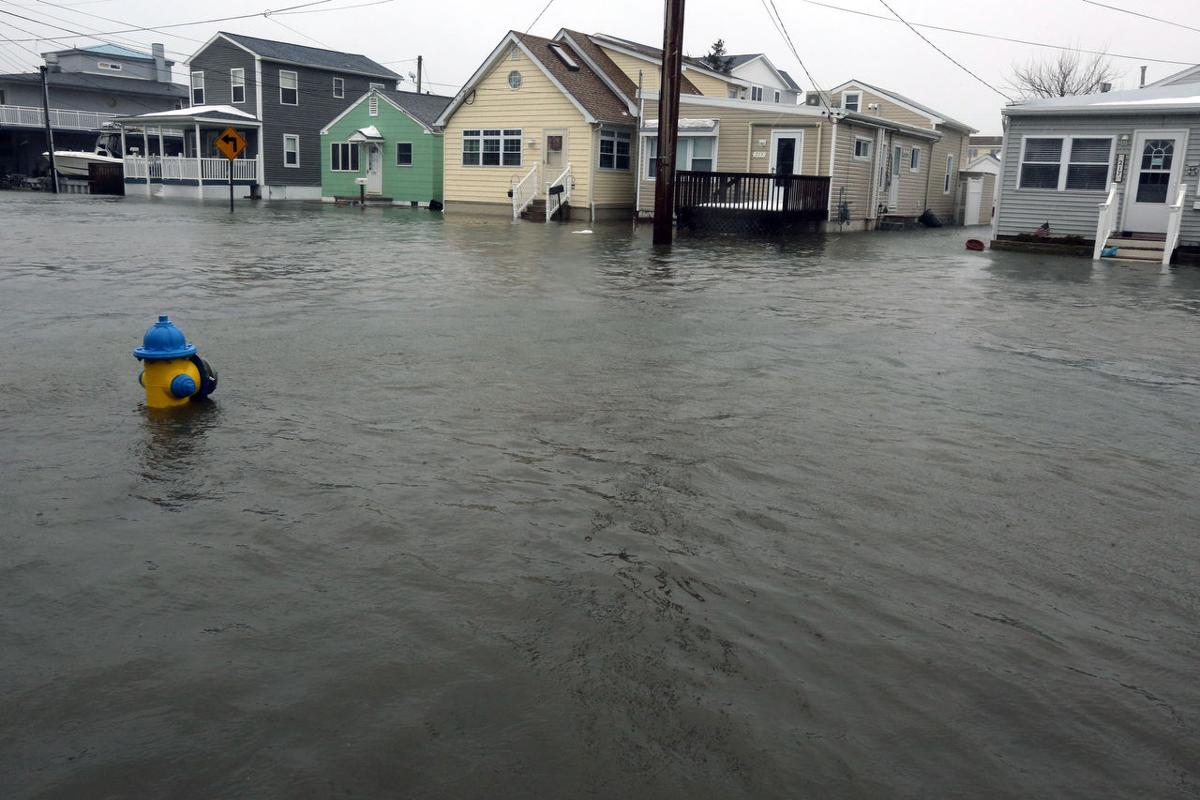 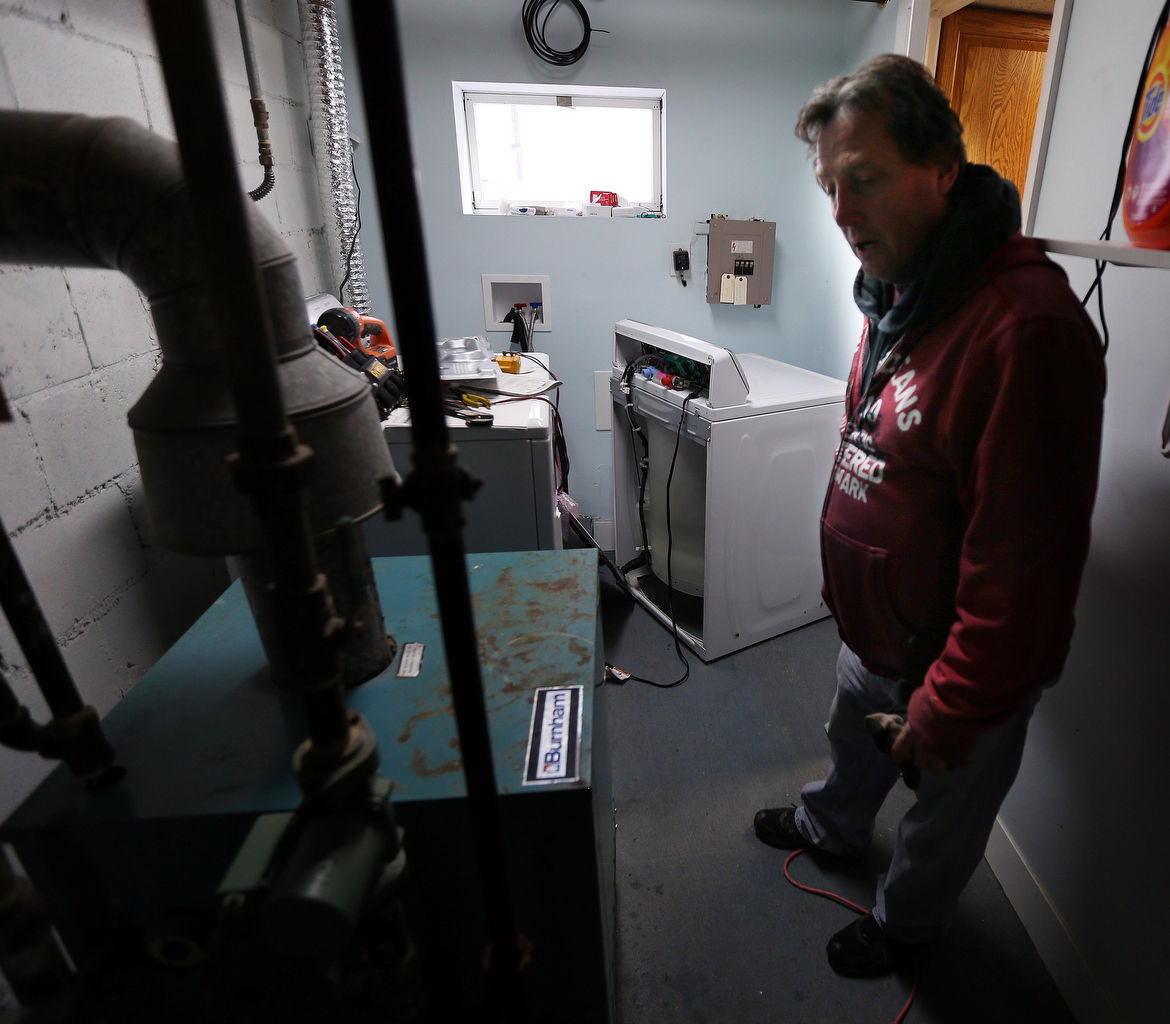 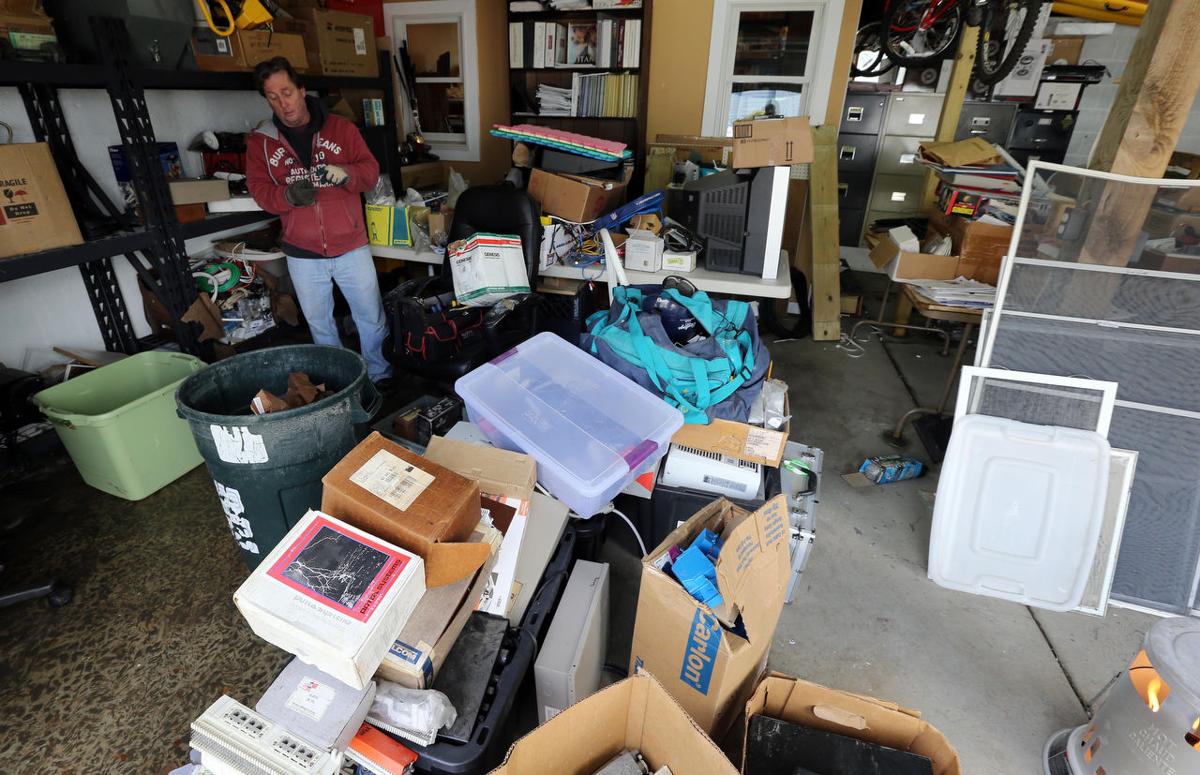 Jim Heuser cleans out his garage littered with flood damaged property. Heuser owns a house at 4th and New York Ave in North Wildwood, and said he lost practically everything he owns from the record flooding caused by Winter Storm Jonas. Friday Jan. 29, 2016. (Dale Gerhard/Press of Atlantic City)

Winter Storm Jonas caused an estimated $67 million in damage to homes, businesses and public infrastructure in Cape May County, according to a preliminary assessment.

The county’s Office of Emergency Management has been tallying storm damage all week, from scoured beaches to ruined docks to homes and businesses inundated with record flooding.

North Wildwood was next at $13 million. Stone Harbor sustained more than $12 million in damage.

“At times, this storm was worse than Sandy for us because of the weather,” Sea Isle Mayor Leonard Desiderio said. “I had a fire in the middle of town that firemen did an unbelievable job preventing from going to neighboring buildings.”

While the damage estimates are subject to change, Emergency Management Director and Avalon Mayor Martin Pagliughi said they're expected to go higher.

The figures are expected to make the county eligible for federal disaster assistance. He submitted the preliminary assessment to the state Friday.

“We knew the number was going to be huge. There should be no excuse not to ask for a federal declaration," he said.

Atlantic County identified an estimated $2.5 million in damage to public property. But this does not include severely damaged beaches in Atlantic City that benefit from routine beach renourishment through a federal program.

Likewise, the damage estimates should make Atlantic County eligible for a federal disaster declaration, he said.

The storm affected 15 of Cape May County's 16 towns to some extent. Even Woodbine in the Pine Barrens sustained thousands of dollars in damage. Only the tiny borough of Cape May Point reported no damage from the storm.

And at least two towns, Dennis Township and West Cape May, are still tallying damage estimates.

Pagliughi said these estimates are expected to trigger a closer inspection and survey by the Federal Emergency Management Agency.

While the county could not immediately provide a breakdown by damage type, Pagliughi said much of the financial harm was to the county's depleted beaches.

The state surveyed 66 coastal towns and found 26 had minor beach damage, 21 had moderate and 19 had severe damage.

“The bottom line is those engineered beaches did their jobs by protecting homes and infrastructure. That’s why we have them and have been working so hard since Superstorm Sandy to get them done," he said.

Considine said in northern Ocean County, beaches that saw postponed federal renourishment projects are more vulnerable to future storms than those in Cape May County that benefited from recent beach projects.

"The other important thing to remember is the sand does slowly move back on to the beaches. Basically, it’s simply redistributed onto sand bars during events like these and ultimately works its way back to the beach,” Considine said.

State officials are in contact with the U.S. Army Corps of Engineers to address where they may be able to help with replenishment efforts.

Ocean City lost between 300,000 and 475,000 cubic yards of sand during the storm, Emergency Management Coordinator Frank Donato said. But help could be on the way for the city's south end, he said.

“This section of beach is due to have a re-pump of 323,000 cubic yards which was damage sustained by the October nor’easter,” he said. “And it is possible now that additional sand could get added due to Jonas.”

The state and Army Corps are investigating this possibility, he said.

Cape May Point  (No damage to report)

The state will host storm-assistance workshops in Sea Isle City and Wildwood on Thursday so residents and business owners can find out what assistance is available to help recover from Winter Storm Jonas.

Representatives from the state Departments of Banking and Insurance, Community Affairs, Human Services, Environmental Protection and the Economic Development Authority will be on hand to answer questions or assist with particular problems.

The workshop is from 11:15 a.m. to 4:15 p.m. Thursday at the Sea Isle City Library at 4800 Central Ave. and the Wildwoods Convention Center on the Boardwalk in Wildwood.

The event will bring together officials from the American Red Cross, the Salvation Army, the United Way, Catholic Charities and several government agencies. They will be available from 10 a.m. to 5 p.m. in City Hall, 4400 New Jersey Ave.

The day will include a presentation, “How to Get Your Recovery Off to a Good Start,” and will offer “support for emotional and spiritual needs,” according to the Red Cross.

The Resource Center had been scheduled at the West Wildwood Borough Hall, but that building was flooded, an official said. The sponsors decided Friday morning to change the venue.

“We got 8 to 10 inches in the hall itself,” said Donna Frederick, West Wildwood’s borough clerk. “We got hit pretty hard.”

The flooding shut down Borough Hall’s restrooms, so the town has ordered portable toilets to replace them, she added.

The Tri-County Community Organizations Active in Disaster is co-sponsoring the Resource Center.

Also scheduled to attend are the St. Vincent de Paul Community FoodBank of New Jersey, CrisisCleanup.org and Disaster Response Crisis Counseling, plus the Cape May County Department of Human Services and the county Department of Aging and Disability Services.

Residents should bring proof of their address, officials said.

Protests near Minneapolis after police shooting

Protests near Minneapolis after police shooting

NORTH WILDWOOD — Jim Heuser bought his home from a Hurricane Sandy victim. The house still had storm damage when he got it, so over the last t…

In the wake of devastation from Winter Storm Jonas, some of the hardest-hit communities in Cape May County are making special arrangements to …

The Federal Emergency Management Agency is going town to town this week to gauge damage to public and private property from Winter Storm Jonas.

Lessons of Sandy: Raising homes paid off for some

Larry Johnson got 2 inches of water in his Ocean City home in Hurricane Sandy, just enough to force him to rip out all the flooring and 2 feet…

Wildwood lends helping hand to all in need

WILDWOOD — After Winter Storm Jonas trashed her house, all Sandy Anderson had to wear on her feet were a pair of pale pink Croc clogs. The rub…

You’re not imagining things, South Jersey. The tides are getting higher, the flooding is getting worse and the frequency of both is increasing.

LOWER TOWNSHIP – The Lobster House in Lower Township reopened its dining room Wednesday for the first time since being flooded by Winter Storm Jonas.

Gov. Chris Christie on Thursday said he would ask for a federal disaster declaration to reimburse towns for Winter Storm Jonas, which caused e…

OCEAN CITY — Wendy Smith and her neighbors talked about setting up a rest stop in the middle of the beach at 57th Street Sunday.

OCEAN CITY — Property owners in Ocean City will now enjoy an even bigger discount on their flood insurance premiums.

Saturday is International Coastal Cleanup Day, and there are efforts scheduled throughout the region to clear debris and litter from waterways.

NORTH WILDWOOD — Brothers Michael and T.J. Haldeman are in a race to reopen their 17th Avenue pub in time for the biggest sports holiday of th…

WEST WILDWOOD – Harry Kershaw, 81, has been through floods before at his two-story Glenwood Avenue home, including the 1962 storm that is the …

Debris from a flood damaged seafood market caused by the record flooding of Winter Storm Jonas, sit on the curb at 6th and New Jersey Ave in North Wildwood. Friday Jan. 29, 2016. (Dale Gerhard/Press of Atlantic City)

Jim Heuser cleans out his garage littered with flood damaged property. Heuser owns a house at 4th and New York Ave in North Wildwood, and said he lost practically everything he owns from the record flooding caused by Winter Storm Jonas. Friday Jan. 29, 2016. (Dale Gerhard/Press of Atlantic City)