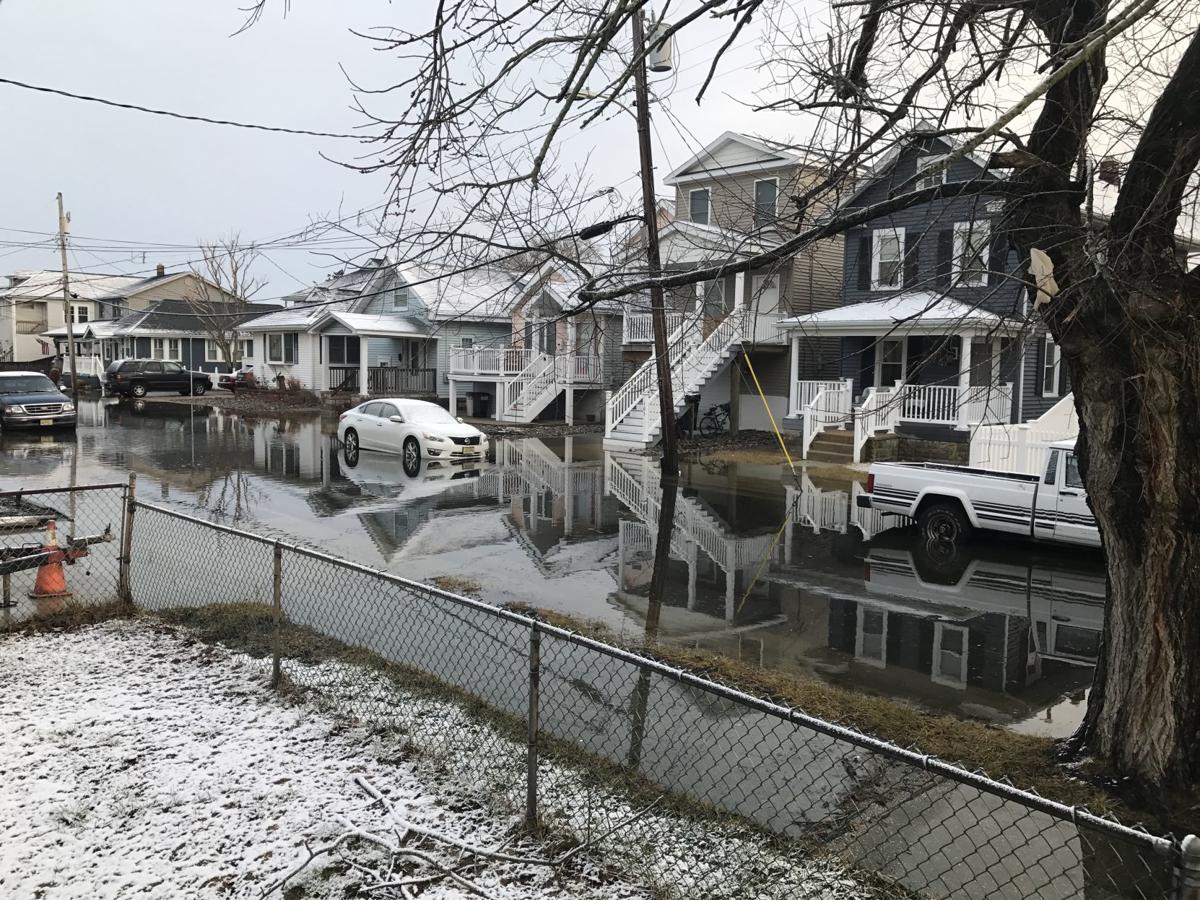 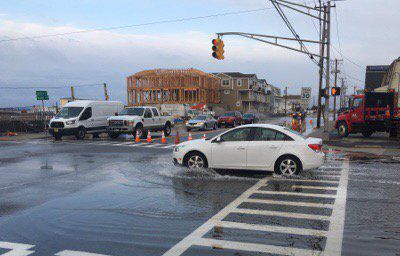 Flooding on Spruce Avenue in Wildwood. We already have wet roads this morning. Rain showers turned to snow showers overnight across the region. Up to a half inch was seen in places, mainly along and east of the Parkway and on grass or your car top. Snow will end in Ocean County by 7 a.m.

Words of advice: Give yourself extra time Tuesday for traveling.

Flooding started early Tuesday morning in Ventnor Heights. The water rose around cars on Oxford Avenue and other side streets and closed West End Avenue at North Albany Avenue.

Cars were detoured around the pools of water, but were then detoured again from North Albany Avenue onto the Atlantic City Expressway.

A call to the Egg Harbor Township Police Department for comment has not yet been returned.

We already have wet roads this morning. Rain showers turned to snow showers overnight across the region. Up to a half inch was seen in places, mainly along and east of the Parkway and on grass or your car top. Snow will end in Ocean County by 7 a.m.

If you do not receive coastal flooding at the shore in the morning, the snow afterward will lead to hazardous conditions at times.

Let us start with the coastal flooding. Northeast winds have been blowing onto our shores since Sunday night. As a result, water has been piling up along the Jersey Shore. In addition, the Earth plays host to a super blue blood moon Wednesday (the second full moon in a month that is also a Supermoon with a reddish-orange tinge). The combination of the two almost guarantees us coastal flooding. Minor flood stage is expected for most of the shores. In minor flood stage, buildings and structures are fine. However, overwash from bays and shores may move onto roads.

There will be spotty areas in moderate flood stage, mainly around Cape May. In this stage, roads are almost always likely to have water on them. In addition, very low-lying beach houses may see some water.

After the coastal flooding subsides late morning, snow will then move in. This is from an “inverted trough,” or north to south drop in pressure, rather than south to north. Light snow will start between 9 a.m. and noon, ending between 5 and 8 p.m. Given the preceding warmth, pavements will struggle to accumulate and salt should do the trick.

However, inverted troughs are notorious for setting up bands of snow. Parts of South Jersey will be in the “bulls-eye.” Here, a burst of moderate intensity snow would fall for a couple of hours. This snow would stick on all surfaces.

All in all, we are not dealing with a lot of snow. Around an inch is expected for most. In the banding, 2 inches are in the cards

What might be more hazardous is Tuesday night. Temperatures will crash into the teens and a flash freeze is expected. Sidewalks and streets will have patches of ice Wednesday morning.

Highs will barely peak above freezing during the day, with a high of 33 expected.

A rain-to-snow storm will move through Friday.

The changeover times will be ironed out after Tuesday’s system.

The Super Blue Blood Moon came to New Jersey for the first time since 1866 on Wednesday. Since no one on Earth was alive to see the last appea…

ATLANTIC CITY — A search warrant led to the arrest of two men and the recovery of over 100 bags of heroin, according to city police.

TRENTON — Chris Christie is known for speaking his mind. Now, he'll get paid to do it.The former Republican governor of New Jersey on Tuesday …

The Absecon Lighthouse was graffitied over the weekend, and police are looking for the vandals.

Owner offers to give Goshen cemetery to Middle Township

MIDDLE TOWNSHIP — While a meeting with Township Committee didn’t go as smoothly as he hoped, Will Keenan, the owner of a local church, said he got his point across to committee members that he is willing to give the cemetery adjacent to the former Goshen Methodist Church to the township, or a group of citizens committed to preserving the property.

WOODBINE — Mayor William Pikolycky joined about 100 mayors from around the country at the White House last week to meet with President Donald Trump and hear his plans for helping towns.

South Jersey Gas is set to begin construction of natural gas mains to about 160 homes in Dennis Township, according to the organization.

The New Jersey State Police offered tax tips on Facebook and advice on how to avoid tax crimes.

The Super Blue Blood Moon arrived for the first time since 1866 on Wednesday. Press photographer Dale Gerhard took photos this morning of the …

Flooding on Spruce Avenue in Wildwood. We already have wet roads this morning. Rain showers turned to snow showers overnight across the region. Up to a half inch was seen in places, mainly along and east of the Parkway and on grass or your car top. Snow will end in Ocean County by 7 a.m.