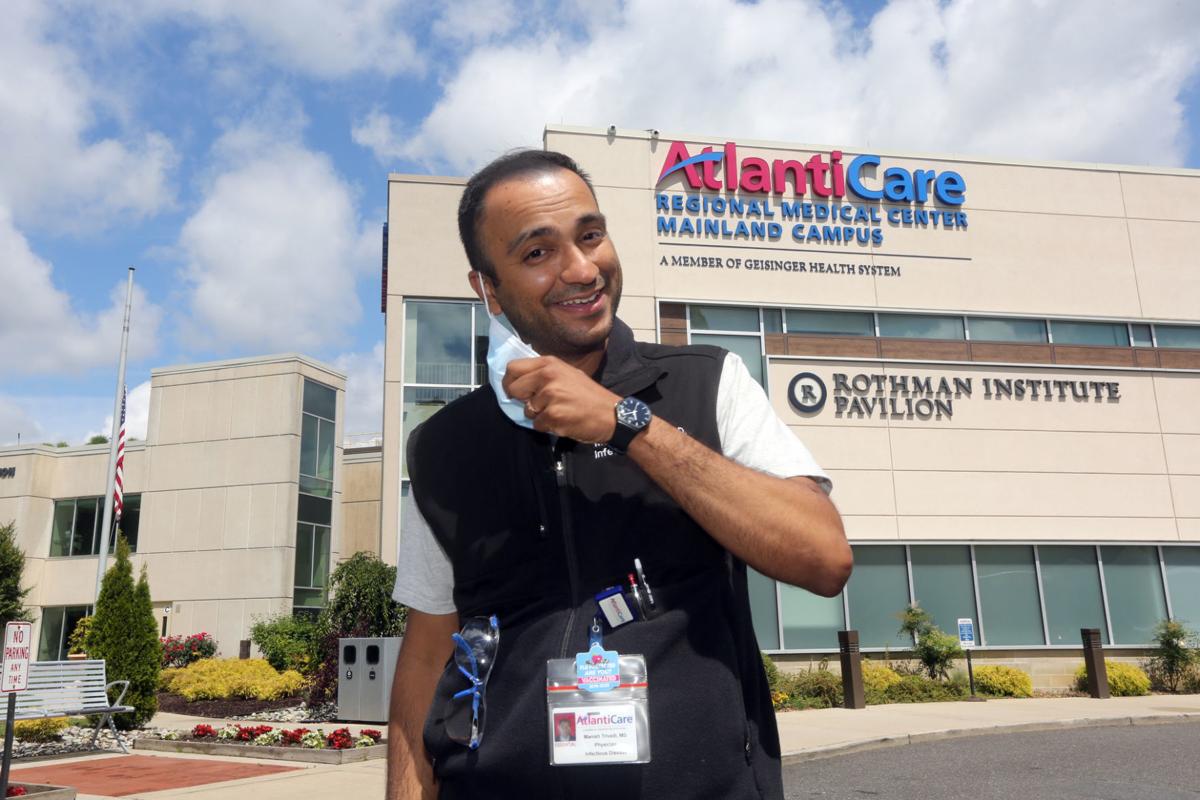 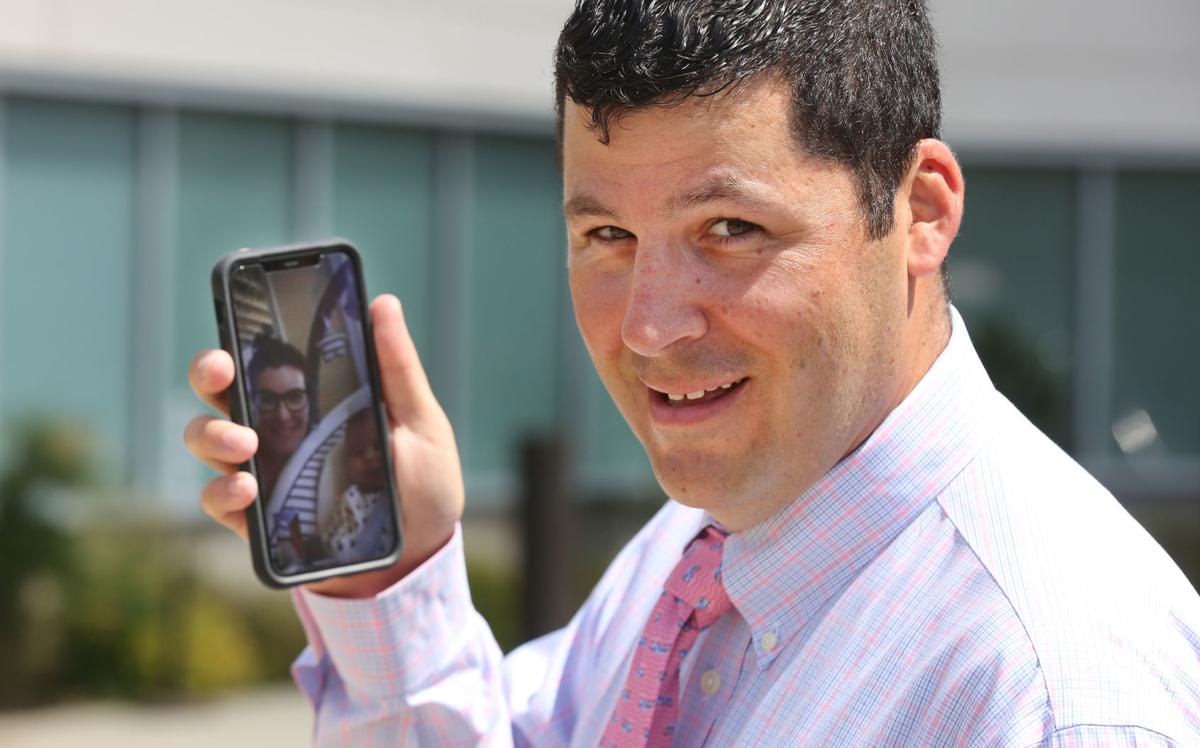 Dr. Brian Acunto, of Brigantine, an Emergency Medicine DO, checks in with his wife, Breana, and daughter, Anabelle, 3 months, on a FaceTime call while at the AtlantiCare Medical Center, Mainland Mainland Division, in Galloway, Friday, June 19, 2020. (VERNON OGRODNEK / For The Press) 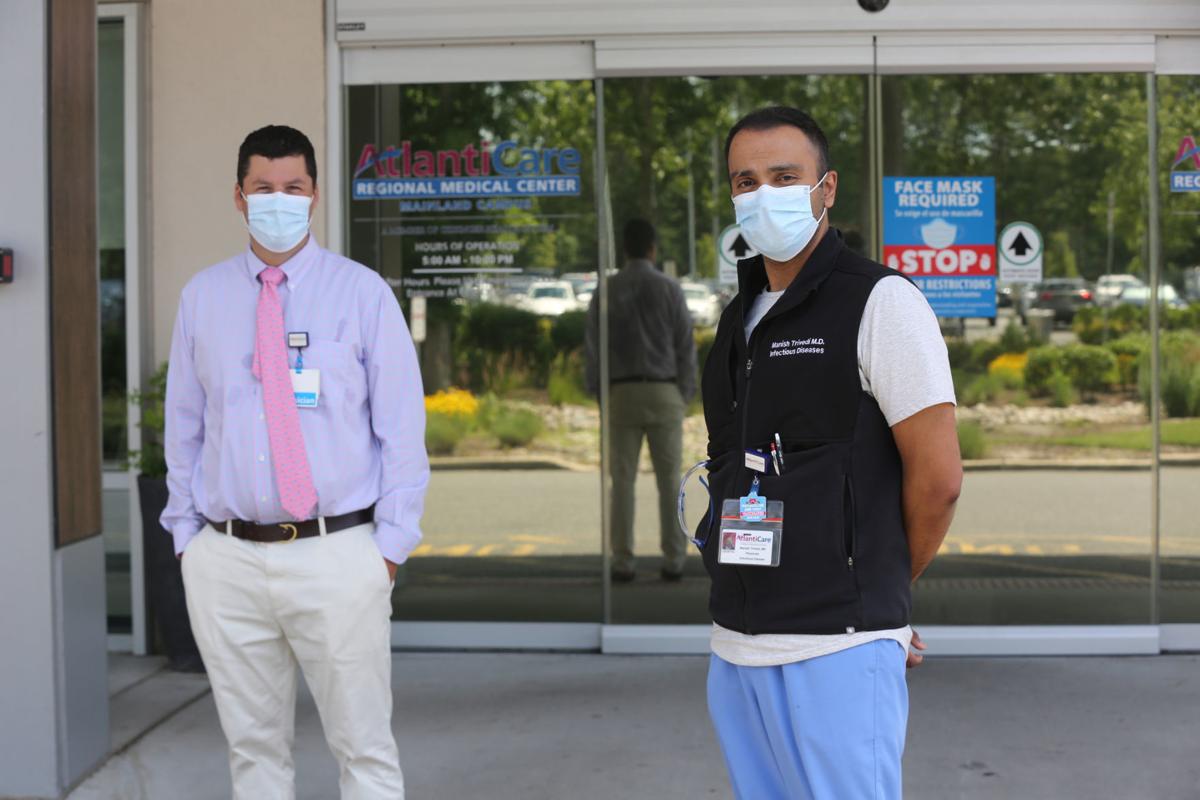 Dr. Brian Acunto, of Brigantine, an Emergency Medicine DO, checks in with his wife, Breana, and daughter, Anabelle, 3 months, on a FaceTime call while at the AtlantiCare Medical Center, Mainland Mainland Division, in Galloway, Friday, June 19, 2020. (VERNON OGRODNEK / For The Press)

Dr. Manish Trivedi is used to working several weeks without a day off.

And as director of AtlantiCare’s Infectious Diseases Division and chairman of its Infection Control Committee, he was trained to prepare for the worst.

Still, nothing could have prepared him for the impact of the COVID-19 pandemic. Two weeks ago, he finally got to enjoy time off with his wife and two children.

Due to an increased workload from the disease making its way to New Jersey, it was Trivedi’s first day off in more than four months.

“Life has been accelerated, I think, in the last three or four months,” the 39-year-old said. “From an infectious disease perspective, the world is always evolving and diseases are always evolving. You’re always trained to kind of manage a situation like the pandemic, and I don’t think anybody really realized how quickly that would’ve accelerated.”

The weather Planet Earth will bring us this weekend is impeccable timing, since it is both t…

In his position, Trivedi has influenced many key decisions in the state’s efforts to slow the spread of the new coronavirus. The Margate resident helped determine when Atlantic City’s casinos should close, developed new visitor policies for AtlantiCare’s hospitals and has been in constant communication with the Governor’s Office.

From the moment the first cases of the disease were reported in New Jersey, Trivedi has been tasked with organizing staff meetings to go over new policies and make sure everyone knows how to properly put on and remove personal protective equipment. He also sees almost every COVID-19 patient that is admitted to the hospital.

“When you have a day off, you’re still fielding a lot of texts and fielding a lot of phone calls,” Trivedi said. “But, for the most part, to not have to come into the hospital, it’s a little bit of a shock to your system because you’re going, going, going and then all of a sudden you’re not going.

“My wife would always complain, ‘You take a couple days just to reset and figure out that you’re on vacation, and by the time you do that, you have a day or two and then you’re back to getting geared up to get back into the groove again.’”

After work, Trivedi takes off his scrubs and shoes in the garage and heads straight for the shower. He makes sure to leave anything from work outside the livable areas of his home.

Time with his children, 2-year-old Maya and 4-month-old Bodhi, was few and far between the past few months. He would often leave home before they woke up and come back when they were already sleeping. Video calls during the day helped fill some of that void.

A South Jersey Wawa employee was told to take off his Black Lives Matter mask. He quit, and Wawa is examining its uniform policies.

When Bodhi was born Feb. 20, Trivedi spent a day with his newborn before going back to work. He said his wife, Lindsay, an advanced practice nurse at AtlantiCare Physician Group Cardiology, is his inspiration while he continues to work.

“She’s been phenomenal,” Trivedi said. “I could not ask for a better situation. She has two kids under 2 during a pandemic where child care was certainly none because people were afraid to leave their house. It’s stressful for anybody to see their loved ones going into the hospital system where things were very uncertain at the time and things were very scary. For her to maintain that kind of composure for a family and for me, that camaraderie is important.”

Trivedi will work Sunday and will have to wait a week to have a true Father’s Day with everyone the following weekend.

Dr. Brian Acunto is an emergency physician at AtlantiCare. He and his wife welcomed Anabelle, the couple’s first child, March 20.

For him, time with his daughter has been a much-needed reprieve.

WATCH NOW: 'This is just the beginning': Hundreds gather for Hamilton Township protest

“It was actually a nice distraction,” Acunto said. “At the hospital, we had been planning for COVID, especially when it became more and more clear that it was going to enter the Unites States and it was going to potentially hit us locally. We were definitely getting prepared for that in addition to our normal duties, and to have the anticipation of a baby was kind of a nice distraction as well.”

Acunto, 42, takes the same precautions as Trivedi before entering his home. While he wasn’t too concerned about the virus in regard to his daughter, he said becoming a father has made him more empathetic to parents that bring children in for unknown illnesses or injuries.

“There’s a personal attachment of seeing a 3-month-old and now I have a 3-month-old,” Acunto said. “It’s like, ‘Wow, that could be my daughter.’”

Fortunately, quarantining did not keep Acunto from his child.

Dr. Jordan Silver, on the other hand, wasn’t as fortunate.

A single father, the AtlantiCare hospitalist was unable to see his son, 6-year-old Matthew, for more than a month. Matthew lives with his mother in North Jersey, where the state was hit the hardest by the pandemic.

“It was extremely difficult not being able to see him,” Silver said. “To explain to a 6-year-old child that there’s a virus out there that’s very dangerous and normal things that you used to do, you can’t do anymore, is challenging in itself to make them understand why that’s so important.”

The two would see one another on FaceTime nearly every day. After being away from his son, and seeing COVID-19 patients unable to be surrounded by loved ones, Silver gained a greater appreciation for any chance to be with family.

“I lost my father about a year ago, who I was very close with,” Silver said. “I can’t imagine if he was in the hospital (with us) not being able to see him, which is what every family member potentially is going through right now with their loved ones. It certainly puts things in perspective and makes you very empathetic, and your heart goes out to those families.”

ATLANTIC CITY — Cu’raan Samir Williams was a fun-loving, kind-hearted teenager who had a lot…

ATLANTIC CITY — Firefighters rescued a woman trapped under a car Sunday night after she was hit by a alleged drunken driver.