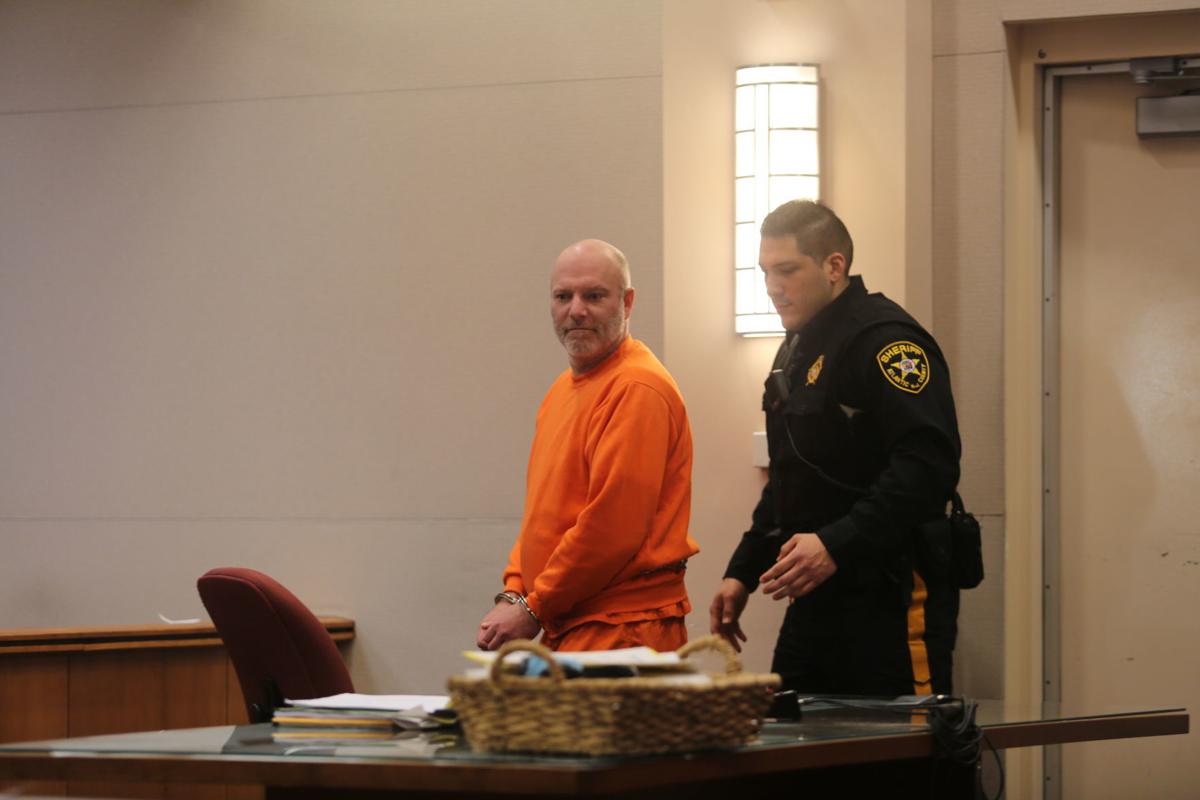 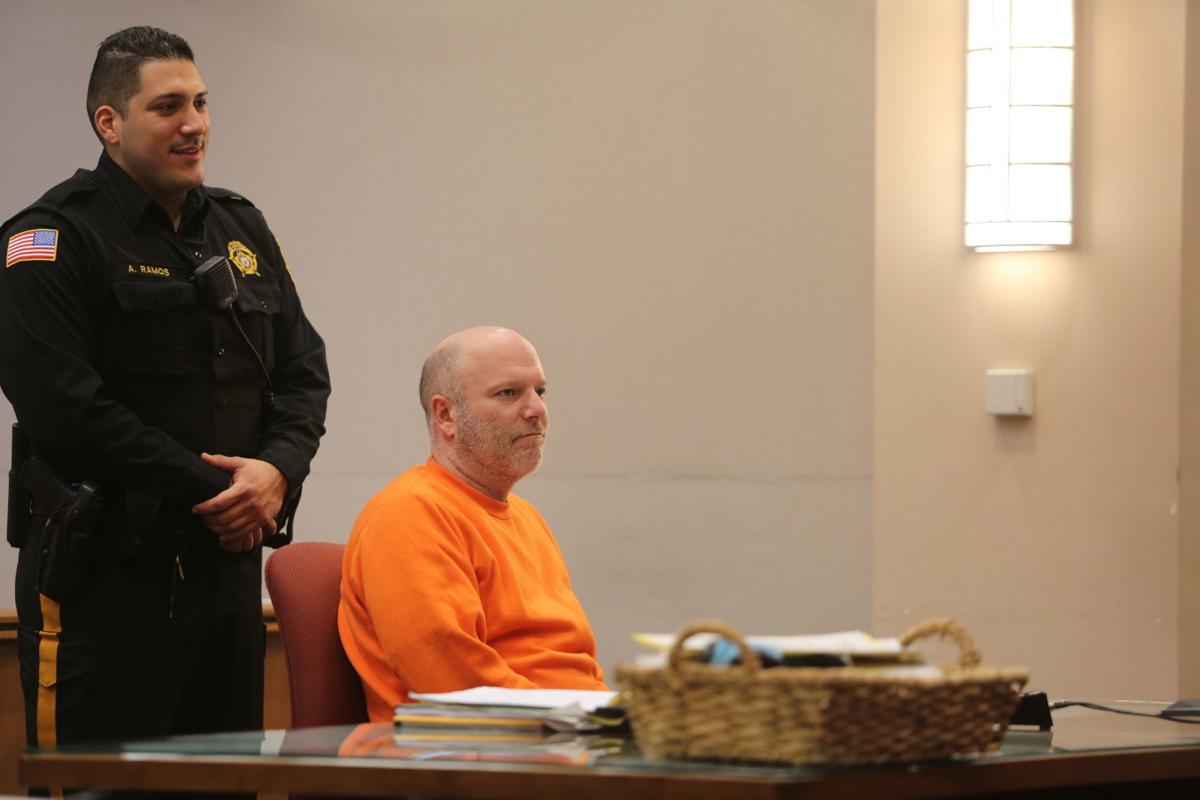 Robert T. Woods Jr., right, 45, appears in Atlantic County Superior Court on Thursday for a detention hearing, after which he was released from jail to home detention.

MAYS LANDING — A pair of blood-stained jeans without a motive is not enough to hold Robert T. Woods Jr. in jail until trial in the golf-club bludgeoning of his father, his lawyer argued Thursday morning.

Woods Jr., 45, was ordered released from jail to home detention Wednesday by Atlantic County Superior Court Judge Donna M. Taylor even though Assistant Prosecutor Deirdre Laws said he could be a danger to his father and the community.

He is charged with two counts of aggravated assault, endangering an injured victim, possession of a weapon for an unlawful purpose and possession of a weapon in the Jan. 21 beating of former professional baseball player Bobby Woods in the Margate home the father and son share. Woods Sr. has been reported in critical condition.

As conditions for his release, Woods Jr. will undergo electronic monitoring in his mother’s Egg Harbor Township residence, must report to the court by phone and in person each month and is barred from contact with his father and several other family members.

“There’s zero motive in the case because the son and father get along famously,” said Mark Roddy, Woods Jr.’s lawyer. “Actually, it’s almost like they’re joined at the hip. The only evidence that they have is a pair of jeans that are conveniently left with blood on them in the kitchen so that the first person who walks into the house has to see them immediately.”

Woods Jr. sat, shackled in an orange county jail jumpsuit, revealing no emotion but conferring with Roddy from time to time during the half hour hearing.

“Does it make him a suspect? Yes,” Roddy said. “Does it mean that there’s probable cause to arrest him, based on that — no video, no witnesses, no witness recollection, no statement of the accused, no motive whatsoever? I don’t think so.”

Authorities, who found the bloodied golf club and pants in the home, allege Woods Jr. bludgeoned his 70-year-old father, leaving him with a fractured skull, bruising to the back, abrasions to the head and back, and lacerations to the head, neck and hands.

In her arguments, Laws said a communications data warrant shows Woods Jr. was in the area at the time of the attack, and that there are family members who are “very afraid of this defendant and do not want him to get out.”

EGG HARBOR TOWNSHIP — The family of Arty Barrera, who was shot dead in his home Jan. 2, is h…

However, the state’s public safety assessment, a tool that helps a judge determine whether to release or detain a defendant, showed Woods Jr., who has no criminal history, has a low chance of failing to appear for court dates or new criminal activity.

“The PSA does not adequately reflect the defendant’s dangerousness or risk of failure to appear in court for this matter,” she said, reading the charges against him. ”The brutal and violent nature of this assault demonstrates his dangerousness to the victim and the community at large.”

But Roddy said he agreed with the assessment, saying Woods Jr. got a “perfect score” before proposing the plan for Woods Jr. to stay with his mother.

Woods Jr.’s next appearance is scheduled for March 4.

Rains and the emptying of a dam cause flooding in Thailand

Rains and the emptying of a dam cause flooding in Thailand

Colin Powell, former general and secretary of state, dead at 84

Colin Powell, former general and secretary of state, dead at 84

MARGATE — An online fundraiser intended to cover the medical expenses for former professional baseball player Robert Woods Sr. has been set up…

He spent 30 years behind bars before he was exonerated. Now, he's sharing his story in Cape.

MIDDLE TOWNSHIP — Sheila Smith remembers growing up in the 1950s in South Jersey and seeing the community and police working together.

MAYS LANDING — The detention hearing for a Margate man accused of beating his father, former professional baseball player Bobby Woods, with a …

MAYS LANDING — A Margate man accused of beating his father, former professional baseball player Bobby Woods, with a golf club is scheduled to …

ATLANTIC CITY — A 25-year-old Fairlawn woman was arrested in a Jan. 19 robbery after her family reported her missing, police said Wednesday.

The widow of James Kauffman, a local endocrinologist charged in his wife’s 2012 murder, is suing the Hudson County jail where he died by suici…

Robert T. Woods Jr., right, 45, appears in Atlantic County Superior Court on Thursday for a detention hearing, after which he was released from jail to home detention.