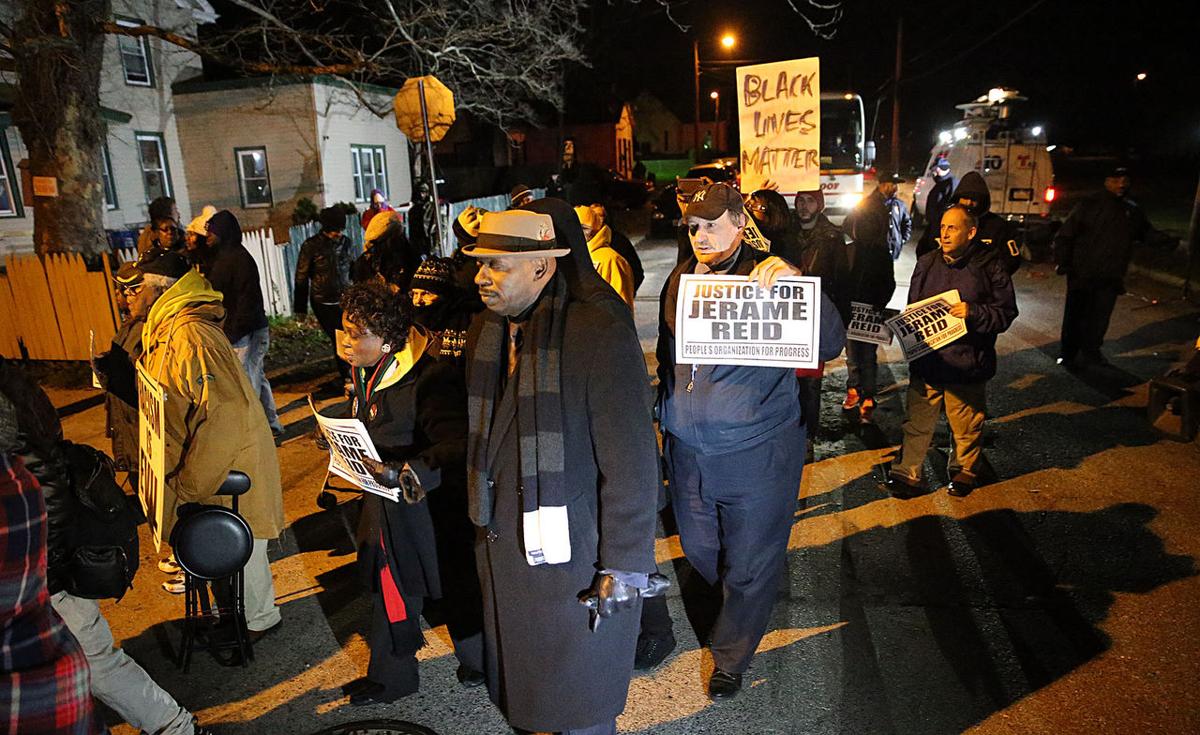 Protestors begin march at South Avenue and Henry Street where Jarame Reid was shot by police. Monday December 28 2015. The People's Organization for Progress organized the rally protestors bussing in participants from Newark. (The Press of Atlantic City / Ben Fogletto) 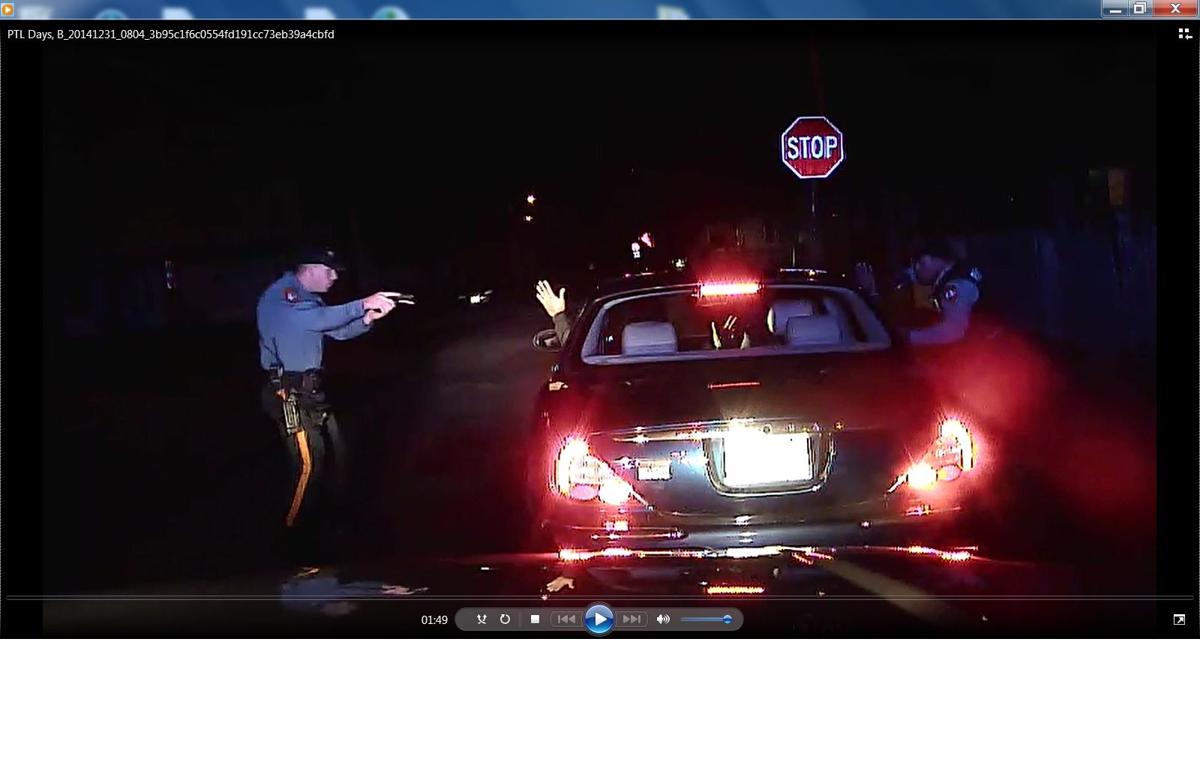 BRIDGETON — Jerame Reid was never going to escape his reputation as an attempted cop-killer, his widow said Tuesday, even after police shot and killed him during a 2014 traffic stop in Bridgeton.

Lawanda Hartsfield-Reid, 39, of Upper Deerfield Township, on Tuesday said the crime Reid committed as a teen haunted him until his death at the hands of police 20 years later.

“My husband was never going to live his past down,” she said. “He was tried, convicted and sentenced to death because of what he did when he was 15.”

The U.S. Attorney’s Office this week said there was insufficient evidence to charge Bridgeton police in the fatal shooting during a traffic stop that was captured on the officers’ dashboard camera. The office declined to comment Tuesday.

No criminal charges for police in Jerame Reid shooting

Reid was 15 in 1994 when he was charged with attempted murder for shooting a .38-caliber handgun three times at State Police troopers who were at his home to investigate the theft of a handgun. He served 13 years in juvenile detention and later South Woods State Prison before his parole in 2007.

His juvenile criminal history followed him to the Cumberland County jail in 2009, she said, when he was beaten so badly by guards that he suffered broken ribs, according to the family’s civil lawsuit. The county paid Reid $340,000 to settle the case.

“I make no justifications for what my husband did. But he served his time at South Woods owing New Jersey nothing,” she said. “They never let that go even when he took that beating at the Cumberland County jail.”

Police Chief Michael Gaimari could not be reached for comment Tuesday. A police sergeant on Tuesday said nobody else was authorized to comment on the case.

Reid’s family is suing Bridgeton in U.S. District Court. In court papers filed in July, the city offered the family $1.2 million to settle the case.

A hearing on the case is scheduled for Wednesday.

The U.S. attorney this week announced it would not bring charges against Braheme Days, the police officer who shot and killed Reid, 36, during a traffic stop at Henry Street and South Avenue on Dec. 30, 2014.

“While in hindsight it is clear that Mr. Reid was unarmed, Officer Days stated that he feared that Mr. Reid either had a firearm or was attempting to grab one from him,” the U.S. Attorney’s Office said in a statement.

Both Worley and Days retired from the Bridgeton Police Department in April.

Hartsfield-Reid said the U.S. attorney unfairly painted her late husband as a deadly threat to police.

“I’m disgusted by that decision. I’m ashamed of the justice system,” she said. “There needs to be some accountability. My husband wasn’t a threat. He was not a threat.”

Days and Officer Roger Worley stopped a car driven by Leroy Tutt, of Long Branch, Monmouth County, after he allegedly drove through a stop sign.

Days reached into the passenger-side window and removed a handgun from a glovebox in front of Reid. Throughout the traffic stop, Days shouted at both occupants to show their hands. He called Reid by name on the video. Days had arrested Reid previously in a case in which Reid was charged with resisting arrest.

When Reid tried to open the passenger door, Days and Worley fired their handguns and Reid was killed. Days’ bullets struck Reid, but Worley’s single shot did not hit anyone, an investigation determined.

A Cumberland County grand jury chose not to indict the officers in the shooting. But the FBI and the U.S. Justice Department launched their own federal probe to determine whether the officers violated Reid’s civil rights.

This week they announced the officers would not face prosecution.

“Viewing the evidence as whole, the government determined that federal charges are not warranted,” the U.S. attorney said.

Hartsfield-Reid said her husband was more than the felon characterized by the justice system. He was a warm, kind person who liked to laugh and to make others laugh. He was helpful and generous with advice for his friends.

“He wasn’t perfect by far. I knew what he did. But I knew the man he was,” she said. “I gave him a chance. He had the potential to be great. They stole my soul that night.”

EGG HARBOR TOWNSHIP — The driver of a pickup truck lost control of his vehicle Tuesday night, crashed through a small fence and plunged into t…

$100,000 in cash and valuables stolen from Bridgeton home

BRIDGETON — More than $100,000 in cash and other items was stolen from the home of a grandmother this month, police said.

BRIDGETON – Standing at the intersection where her husband was shot and killed by police in 2014, Lawanda Hartsfield-Reid said she is starting…

A state legislature bill would require officers involved in fatal shootings and custody deaths to be identified within 48 hours of the incident.

Members of the Jerame C. Reid family finally got the meeting they wanted with federal authorities about his death of the hands of Bridgeton po…

BRIDGETON — Cumberland County has approved a $340,000 settlement with the estate of Jerame C. Reid, a Bridgeton resident who was fatally shot …

Protestors begin march at South Avenue and Henry Street where Jarame Reid was shot by police. Monday December 28 2015. The People's Organization for Progress organized the rally protestors bussing in participants from Newark. (The Press of Atlantic City / Ben Fogletto)