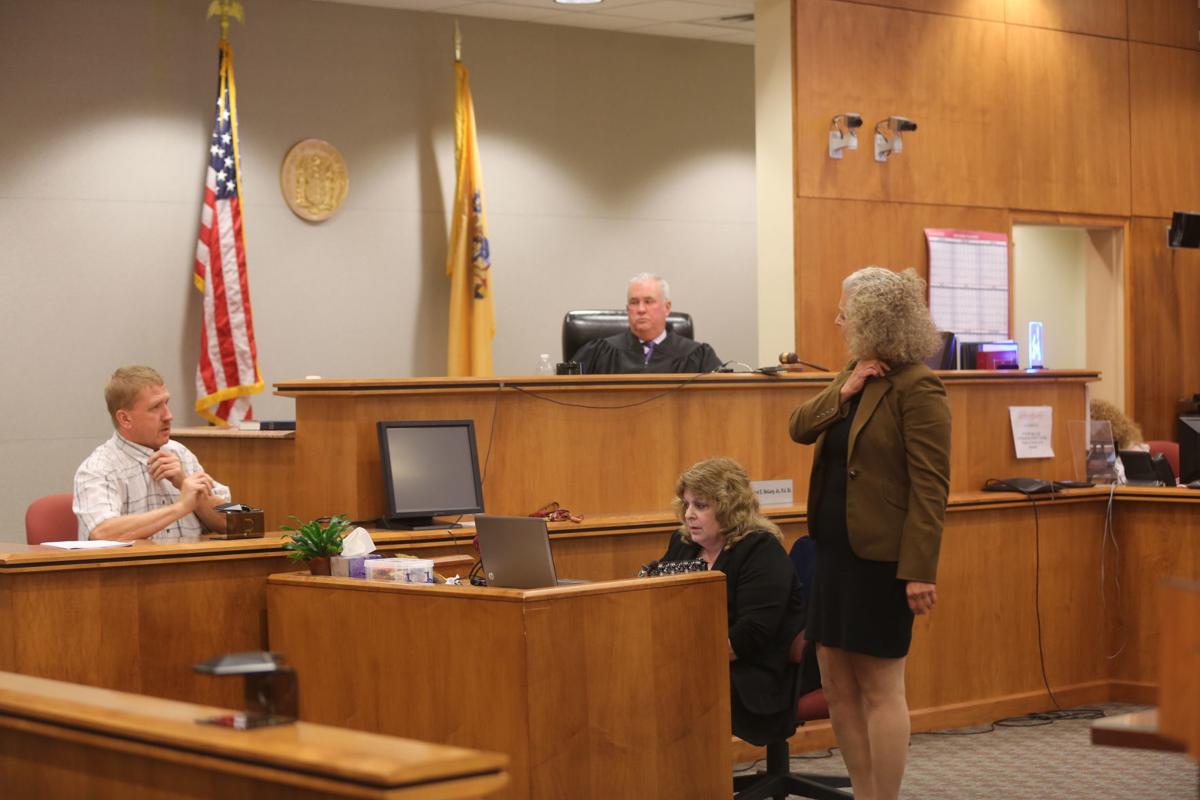 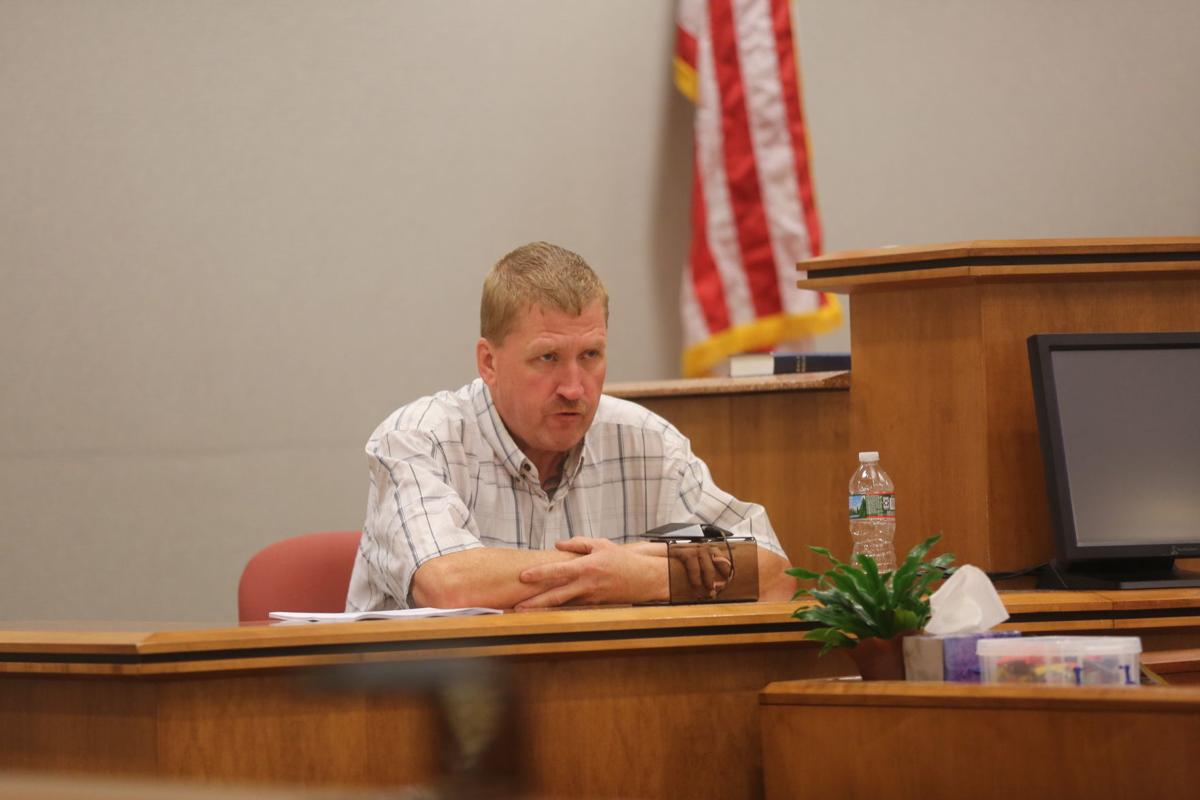 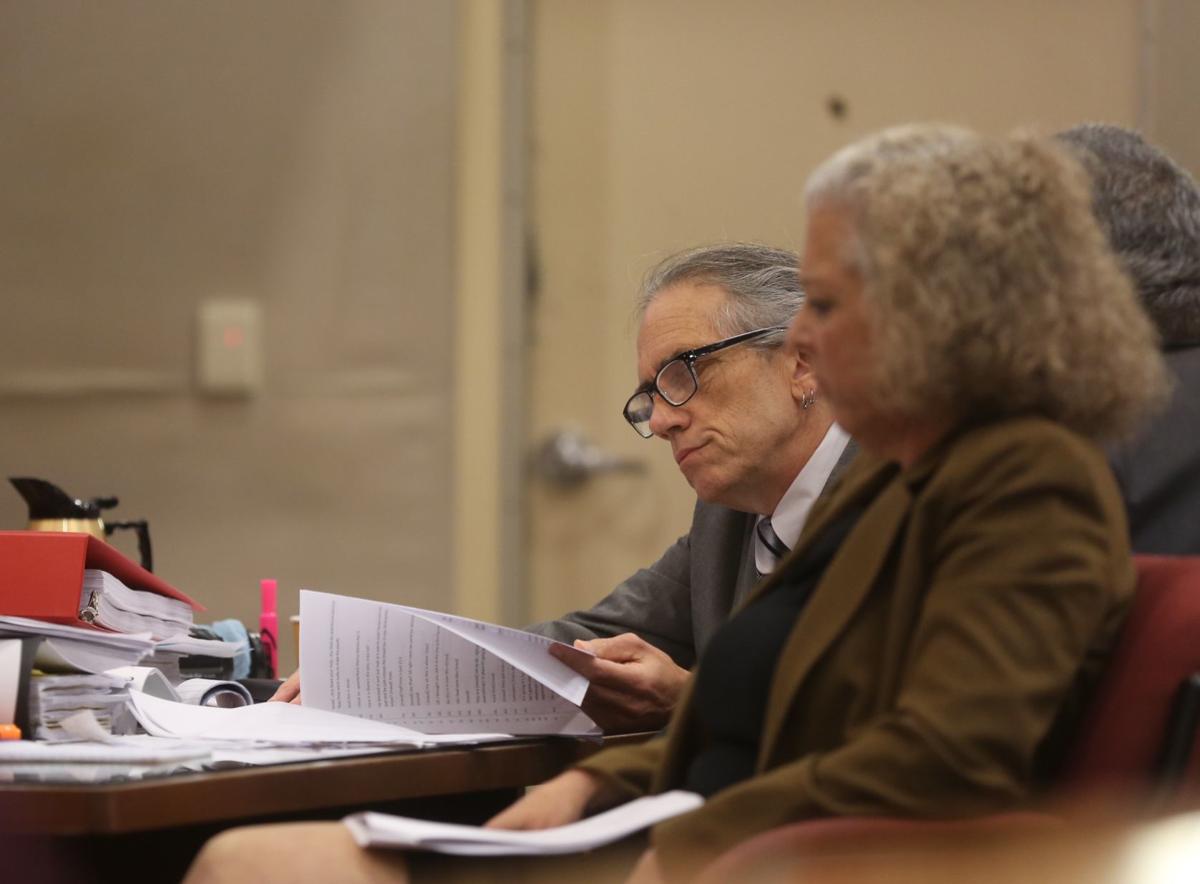 Ferdinand “Freddy” Augello, 62, of Upper Township, seated with his attorneys Mary Linehan and Omar Aguilar, is charged in the murder of April Kauffman. Here, he reads transcripts as secret recordings of him are played for the jury Wednesday, Sept. 19, 2018. 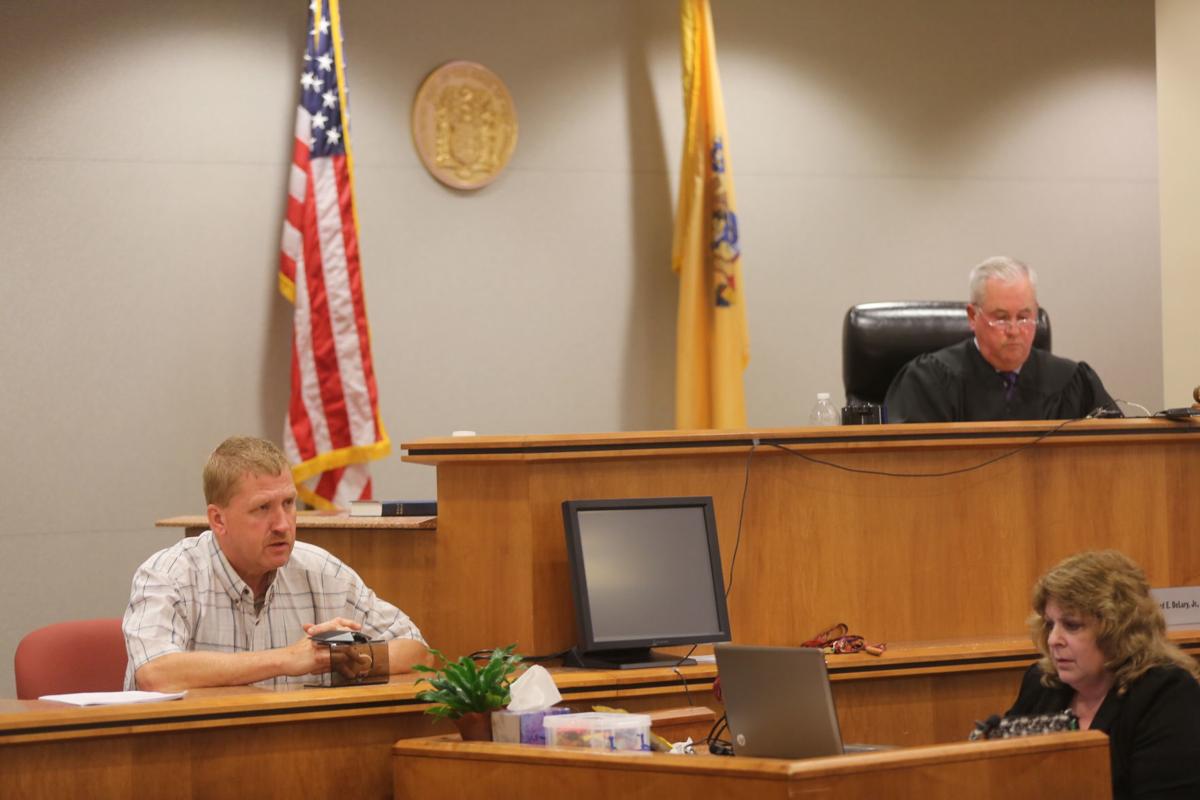 Andrew Glick on the stand as a state's witness in the April Kauffman murder trial Wednesday, Sept. 19, 2018. 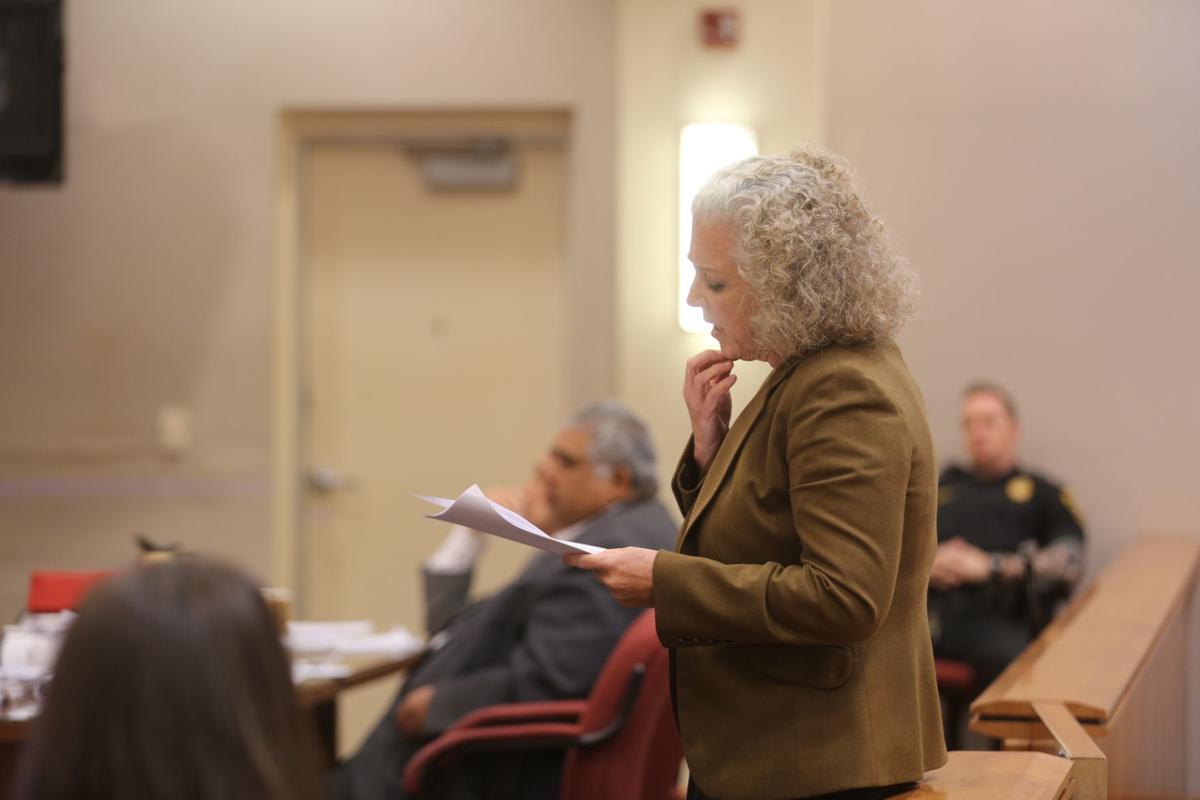 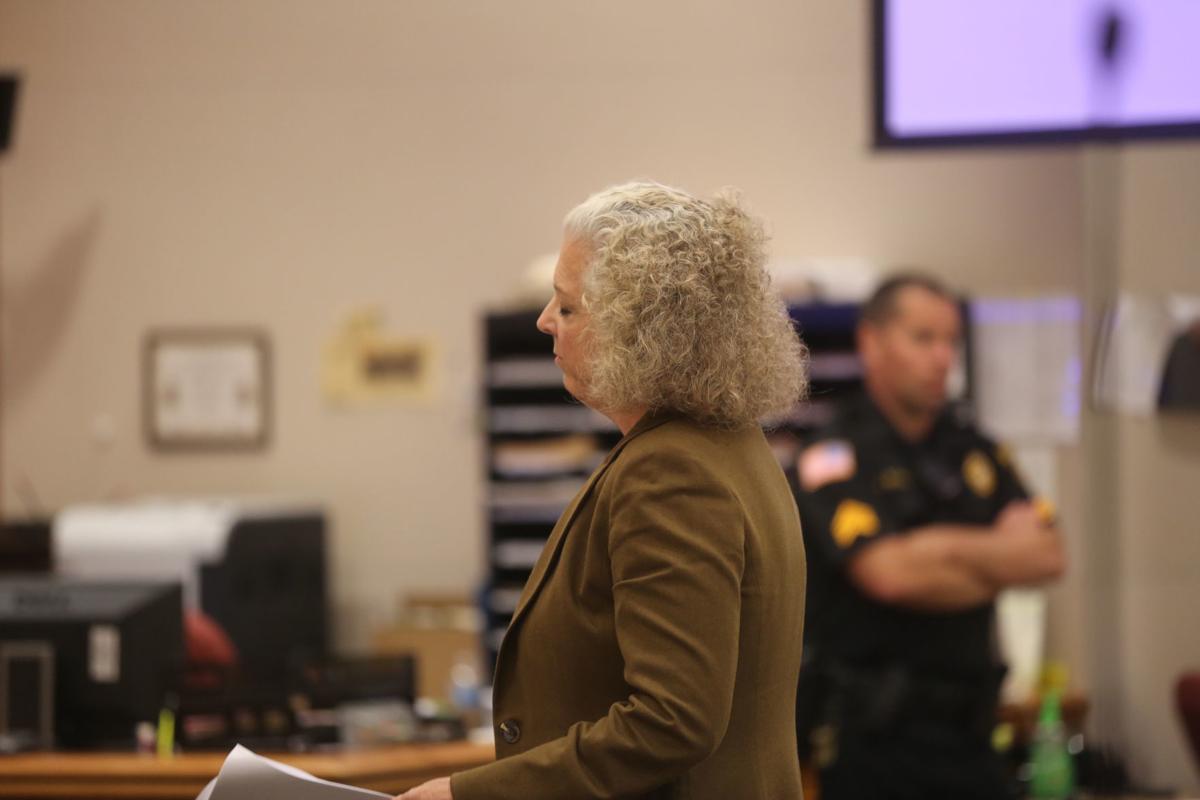 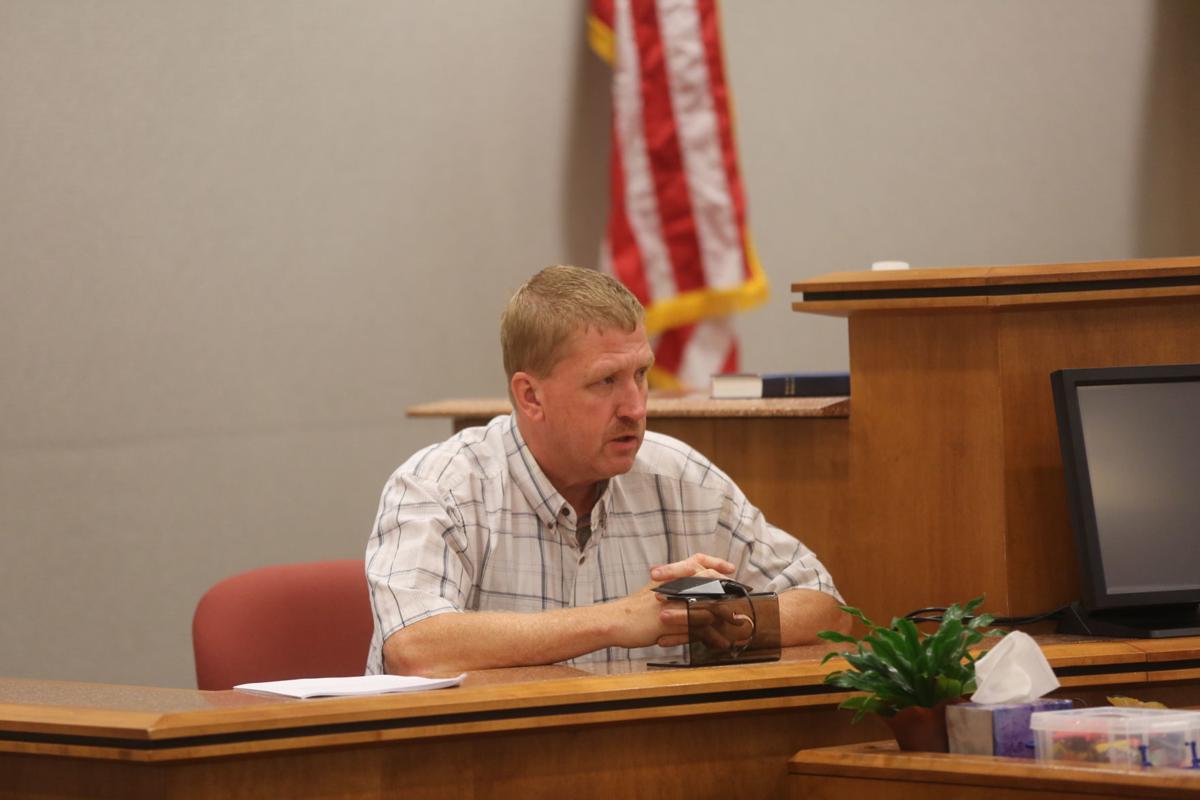 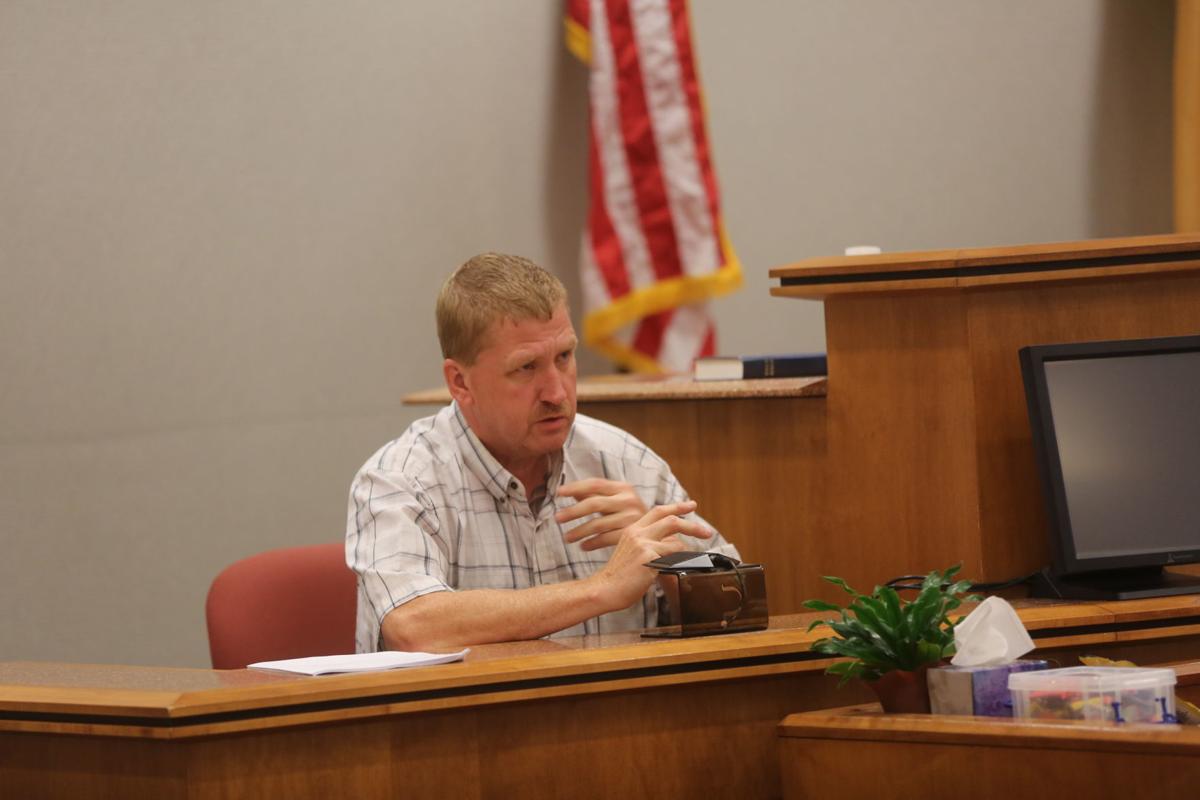 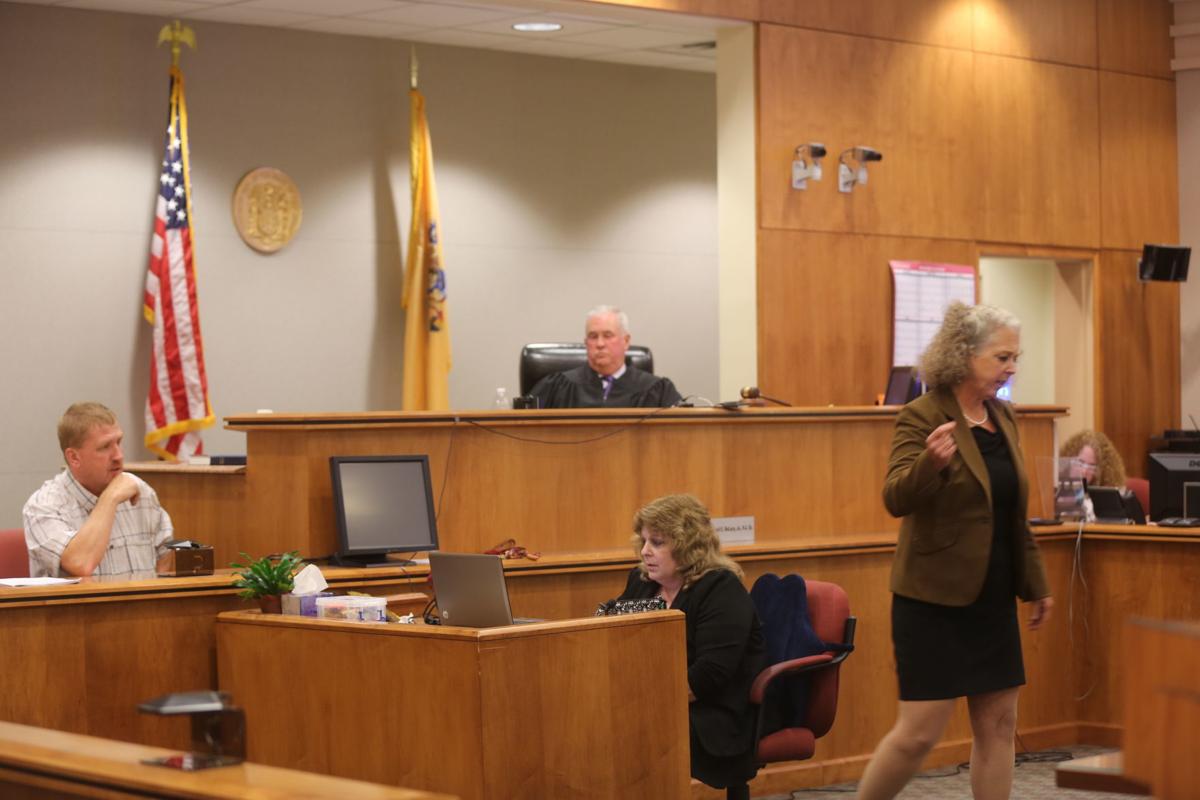 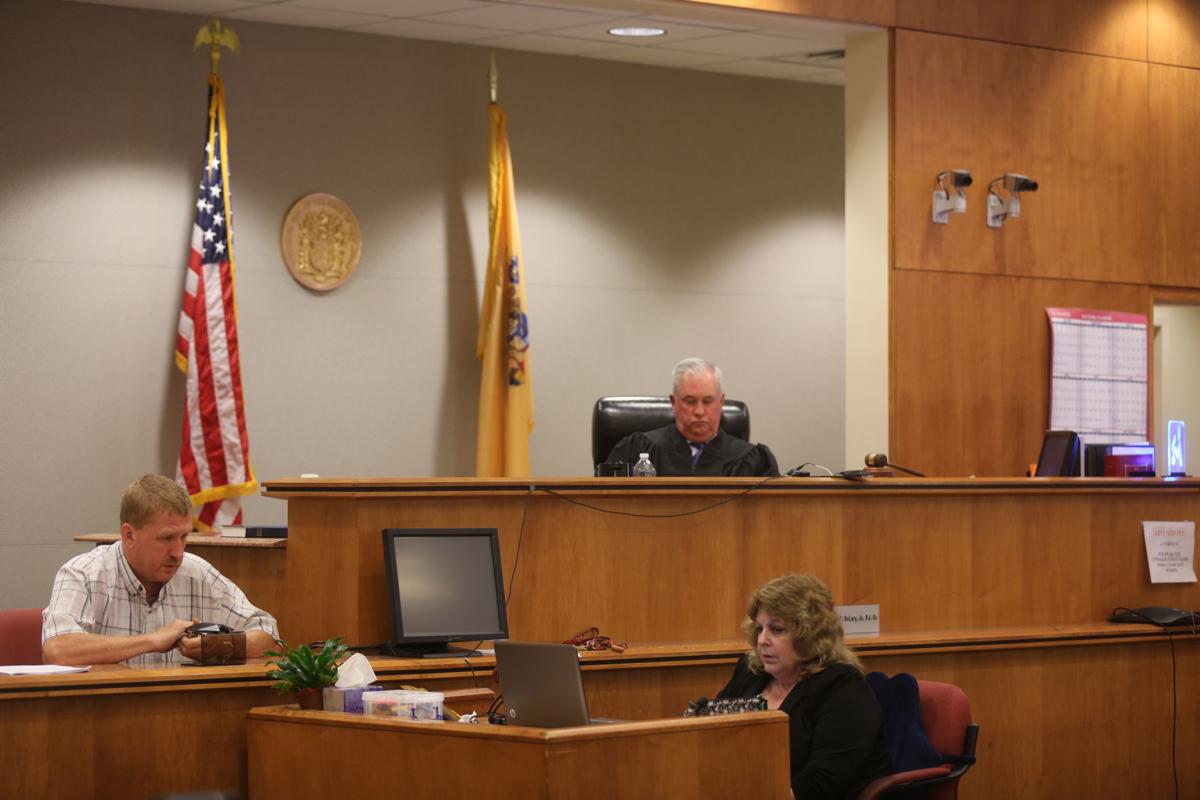 MAYS LANDING — At the state’s behest, Andrew Glick told his friend and fellow Pagans motorcycle club member Ferdinand “Freddy” Augello that a Mexican drug cartel was willing to take out James Kauffman in jail to avoid losing one of their best clients.

Glick took the stand again during the third day of the April Kauffman murder trial Wednesday.

In several secretly recorded conversations with Augello — the only man left alive charged in the May 10, 2012, murder of April Kauffman — Glick tells Augello he has someone who will poison the doctor’s commissary and the two discuss when and how it would happen.

“I brought it up that I had been approached by the people that I had been in business with ... that they had offered their assistance,” Glick told Atlantic County Chief Assistant Prosecutor Seth Levy.

Augello, 62, of Upper Township, is charged with the murder of April Kauffman and with leading an opioid drug ring with James Kauffman out of the doctor’s medical office. But the testimony Wednesday mainly centered on Augello’s third charge of conspiracy to murder James Kauffman. The state alleges Augello wanted the doctor dead to avoid him implicating Augello in the drug ring and murder.

Glick told Levy during examination that Augello told him he wanted Kauffman dead “the sooner the better.”

In another recording, Glick and a suspicious Augello discuss why the cartel members were interested in helping them out.

Glick says he is a good customer of the cartel, and if he goes to jail on weapons and drugs charges stemming from his November arrest, the cartel will lose a quarter of a million dollars in drug income without him.

“I’m kind of signing a deal with the devil,” Glick says.

He later told Levy this was a lie.

Many of the recorded conversations were difficult to understand, and the jury followed along closely to a transcript provided by the prosecution, although Superior Court Judge Bernard E. DeLury had warned that only the recording is the evidence.

In the recordings, Augello was concerned that someone was listening to his conversations, and so he often whispered even when he was alone, turned the radio so loud it was hard to hear over and passed notes.

In one recording, the two men also speculate, ironically, whether Kauffman ever secretly recorded them when they visited him inside Kauffman’s Egg Harbor Township medical practice.

Additionally, the recordings reveal Augello was surprised that Kauffman was not being charged in an ongoing state health benefits fraud scheme involving compounded cream medications and more than a dozen local doctors and pharmaceutical representatives.

That multimillion-dollar scheme, which came out in the news the same summer Kauffman was arrested after a 45-minute standoff with police, is said to have targeted teachers, police officers, firefighters and state troopers.

At the end of one of the recordings, dated Jan. 6, three days before Augello’s arrest and the announcement of murder charges by the Atlantic County Prosecutor’ s Office, Augello thanks Glick.

“That’s cool, I appreciate you doing this,” Augello said.

“I just think this guy can put me away for 20 years. He’s the only guy who can,” Glick replies.

Glick told Levy he risked everything to help the state prove its case against Augello and Kauffman to avoid a prison sentence of his own.

He said he is selling his house and every day he is worried about his safety.

After Levy concluded his questioning of the witness, defense attorney Mary Linehan briefly questioned Glick about the way the recordings were collected.

The former Pagans leader said he wore a wire on several occasions at the request of Atlantic County Prosecutor’s Detective James Scoppa.

“They picked and choosed (sic) when they wanted to do a video. I just went along with whatever they wanted,” Glick said.

Glick told Linehan the Prosecutor’s Office had installed security cameras around his house that would “livestream” who came and went and rented a truck for him to use while his was seized by law enforcement.

Linehan’s questioning of Glick will resume at a later date, DeLury said at the end of the day Wednesday. The trial will resume Thursday morning with two new state’s witnesses.

Communities in Louisiana come together after disaster

MAYS LANDING — The trial surrounding the 2012 killing of April Kauffman resumed Thursday with cross examination of an informant in the case.

PERRYMAN, Md. (AP) — Authorities say multiple people have been shot in northeast Maryland in what the FBI is describing as an "active shooter …

HAMILTON TOWNSHIP — A woman was charged with burglary after trying to steal a homeowner’s dog, police said Thursday.

MAYS LANDING — Facing a possible 40-year sentence on drug charges, Andrew “Chef” Glick made what he thought was the only decision he could — t…

MAYS LANDING — Former Pagan leader Andrew “Chef” Glick told a jury Friday he made up the plot to kill Dr. James Kauffman in jail as part of hi…

Hours of secretly recorded conversations of an alleged murder plot and drug ring, intermixed with mundane chitchat about life, sports and poli…

MAYS LANDING — During a fishing trip in the summer of 2012, Francis Mulholland pointed to a picture of April Kauffman and told his nephew that…

For the third day Wednesday, Andrew “Chef” Glick returned to the stand in Ferdinand “Freddy” Augello's trial surrounding the 2012 murder of Ap…

MAYS LANDING — The murder trial in the death of April Kauffman continued Tuesday with more testimony from an informant.

What's next in the April Kauffman murder trial

MAYS LANDING — Six years after the murder of veterans advocate April Kauffman, the only person left alive who is charged in her murder will go…

Pagans member 'Egyptian' to remain in jail on witness-tampering charges

MAYS LANDING — A jury was selected Wednesday afternoon for the trial of a man charged in the 2012 murder of April Kauffman.

Augello jury selection: 29 picked for the next round

MAYS LANDING — A lot of people know about the 2012 murder of April Kauffman.

MAYS LANDING, N.J. (AP) — A man charged in the killing of a New Jersey radio show host in an alleged plot to prevent her from exposing a drug …

MAYS LANDING — Next week, Ferdinand “Freddy” Augello will stand trial for the murder of Linwood’s April Kauffman, a veterans advocate and radi…

MAYS LANDING — A Superior Court judge will allow into evidence a 2017 letter written by the attorney of the now-dead Dr. James Kauffman, which…

Kauffman co-defendant to appear in court

Two more defendants in the murder case of April Kauffman have pleaded guilty in exchange for testimony during a trial expected to begin in September.

Kauffman co-defendants due in court Thursday

Two of the four remaining defendants in the April Kauffman case will appear in court Thursday as a continuation from appearances earlier this month.

Kauffman co-defendants appear to be heading toward deals

MAYS LANDING —Three co-defendants who have maintained their innocence against racketeering charges as part of the opioid drug ring Dr. James K…

Ferdinand “Freddy” Augello, 62, of Upper Township, seated with his attorneys Mary Linehan and Omar Aguilar, is charged in the murder of April Kauffman. Here, he reads transcripts as secret recordings of him are played for the jury Wednesday, Sept. 19, 2018.

Andrew Glick on the stand as a state's witness in the April Kauffman murder trial Wednesday, Sept. 19, 2018.