TNF: Scores and updates from Colts vs. Broncos 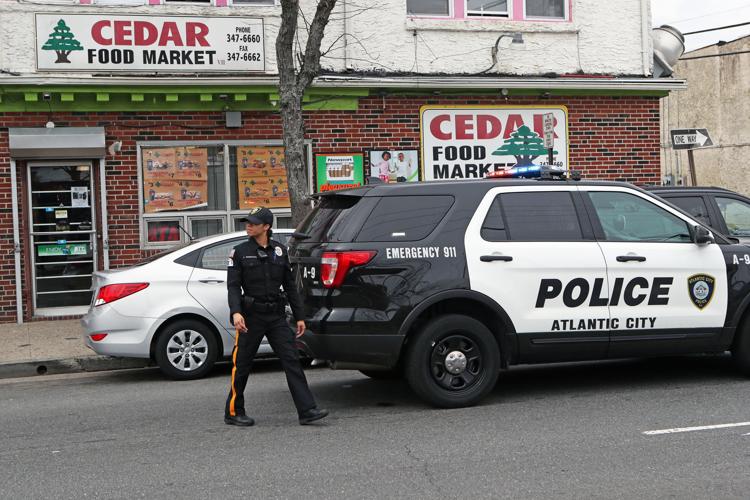 Officer Jamira Norwood heads back into patrol car of Atlantic City Police Department, after stopping at a Cedar Food Market on Arctic Avenue, which is implemented as part of the Risk Terrain Modeling program in Atlantic City to prevent crime. April 6, 2018 (Craig Matthews / Staff Photographer) 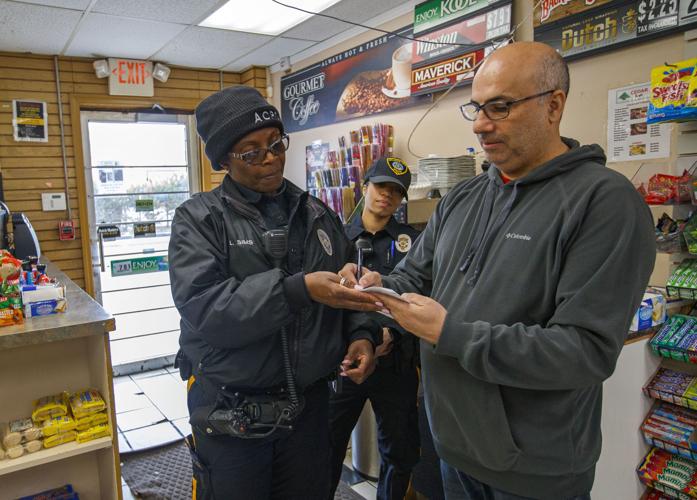 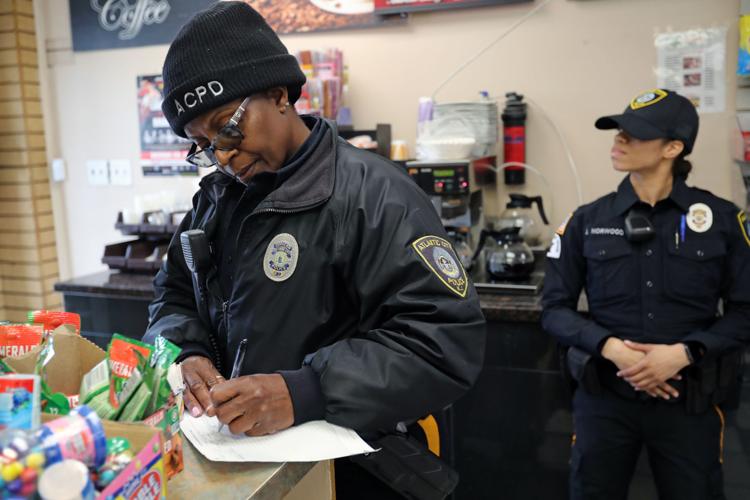 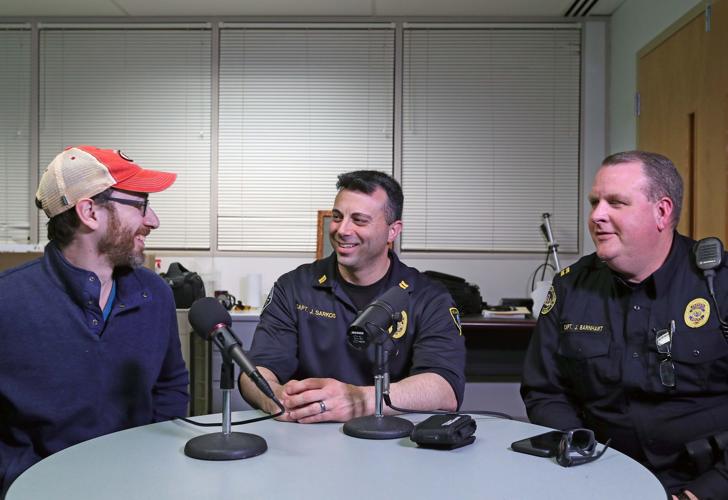 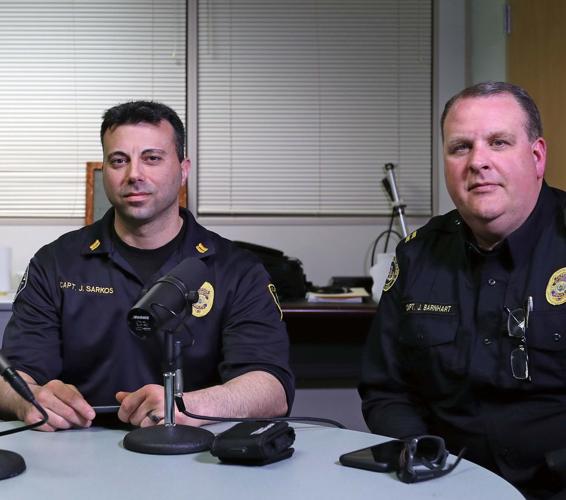 ATLANTIC CITY — For the city Police Department, last year was about staying ahead of crimes before they were committed.

As a result, the number of shootings, homicides and robberies in the city decreased by more than a third in 2017 compared with the year before.

The department began using a risk-based policing model that analyzes data to map out crime risk factors around the city and places where crimes are likely to take place. The tool helps police prevent crimes by tackling factors in the environment identified as risks where crimes take place, and not the people.

“We liked how it focuses on places, not people. It was exactly what we wanted to do,” said Capt. James Sarkos, commander of the department’s investigations division.

The number of shootings, homicides and robberies that took place in the city during 2017 has gone down about 36 percent in 2017 compared to th…

It analyzes data and helps map areas where crimes are likely to occur, but also identifies factors that draw crime to an area, Caplan said.

Factors that could present a risk for crimes include convenience stores, auto shops, liquor stores, laundromats and vacant properties.

RTM can help the department find ways to make those areas less attractive for crime.

Cedar Market owner Issa Nammour has had difficulties over the years running his business. He has been through a string of burglaries and break-ins, and there was a fatal stabbing inside one of his stores in 2015.

Additional police presence is what he needs, he said, along with more attention on places that are at risk.

“Whatever they’re doing, it’s working,” Nammour said, standing inside his Arctic Avenue location. “They’ve been coming around. You can see more police presence.”

The data and maps from the RTM software are used by the Police Department and other agencies to allocate resources to deter crime at the places determined to be at risk for them, Caplan said.

For instance, the department has been doing checks in certain locations recommended by the model, such as convenience stores like Cedar Market. Each month, the model software prints a location list of where a patrol officer should visit and log.

Caplan presented the initiative to the department in 2015 under the direction of police Chief Henry White, who thought it could shift the focus to the areas instead of the people in crime hot spots where police are constantly responding, Sarkos said.

“If we say, ‘This area is high in crime,’ and then we’re constantly stopping everyone who happens to be in that particular area, it really turns the community off,” Sarkos said. “Crime is not just a police problem, it’s really everyone’s problem.”

GALLOWAY TOWNSHIP — The Stockton Seaview Hotel and Golf Club could have a new owner soon, as…

The system also, through predictions from data analysis, helps prevent crime from moving to one area from another, Sarkos said.

While RTM is not a replacement for patrol initiatives, it is a tool to keep focus on areas that need it, Caplan said.

The department credits the reduction in crime in part to using RTM as a tool.

While they cannot be sure which crimes they are preventing, the department has been working with other agencies in the city, such as Planning and Development, Public Works, the Fire Department and residents, to make sure the trend continues.

On Friday, when Nammour’s Cedar Market was visited by two officers, he said he hopes the model continues to work.

“The presence makes a difference,” he said, as two officers stood in the doorway. “I hope they keep it up.”

ATLANTIC CITY — An Egg Harbor Township man was charged with illegal weapons possession and disposing of a handgun during a foot chase, police said.

ATLANTIC CITY — A man and woman were arrested Thursday, after a large quantity marijuana was found in the guests' hotel room, according to police.

An Absecon man who had more than 1,000 images of child pornography was arrested and charged Friday, Atlantic County Prosecutor Damon G. Tyner said.

ATLANTIC CITY — Issa Nammour remembers how three months ago, a man was struggling from an apparent overdose right outside one of his Cedar Mar…

You only have a week left to file and pay your 2017 income taxes, but even if you waited until the last minute, there’s no need to fret.

Nearly a decade ago, researchers at the Rutgers University School of Criminal Justice invented a new tool to help predict crime. Instead of fo…

ATLANTIC CITY — The Police Department will promote eight officers this afternoon during a ceremony in the Henry E. “Hank” Tyner Memorial Counc…

An Atlantic City man has been charged in the May 14 fatal shooting of another city man, Atlantic County Prosecutor Damon Tyner said in a news …

MAURICE RIVER TOWNSHIP — Joe Sterling has spent 36 years as a volunteer with the Leesburg Fire Department, but he’s recently taken on a new ti…

ATLANTIC CITY — Years after deep cuts to the Police Department left it to do more with less, its methods are being held up as a model on a glo…

Kelli Glover, of Ventnor, knows full well the tradeoffs a person makes pursuing fame via reality television. She went through the process thre…

GALLOWAY TOWNSHIP — Mara Justine has to keep her lips sealed with friends, teachers and fans on social media who want to know how far she has …

Officer Jamira Norwood heads back into patrol car of Atlantic City Police Department, after stopping at a Cedar Food Market on Arctic Avenue, which is implemented as part of the Risk Terrain Modeling program in Atlantic City to prevent crime. April 6, 2018 (Craig Matthews / Staff Photographer)