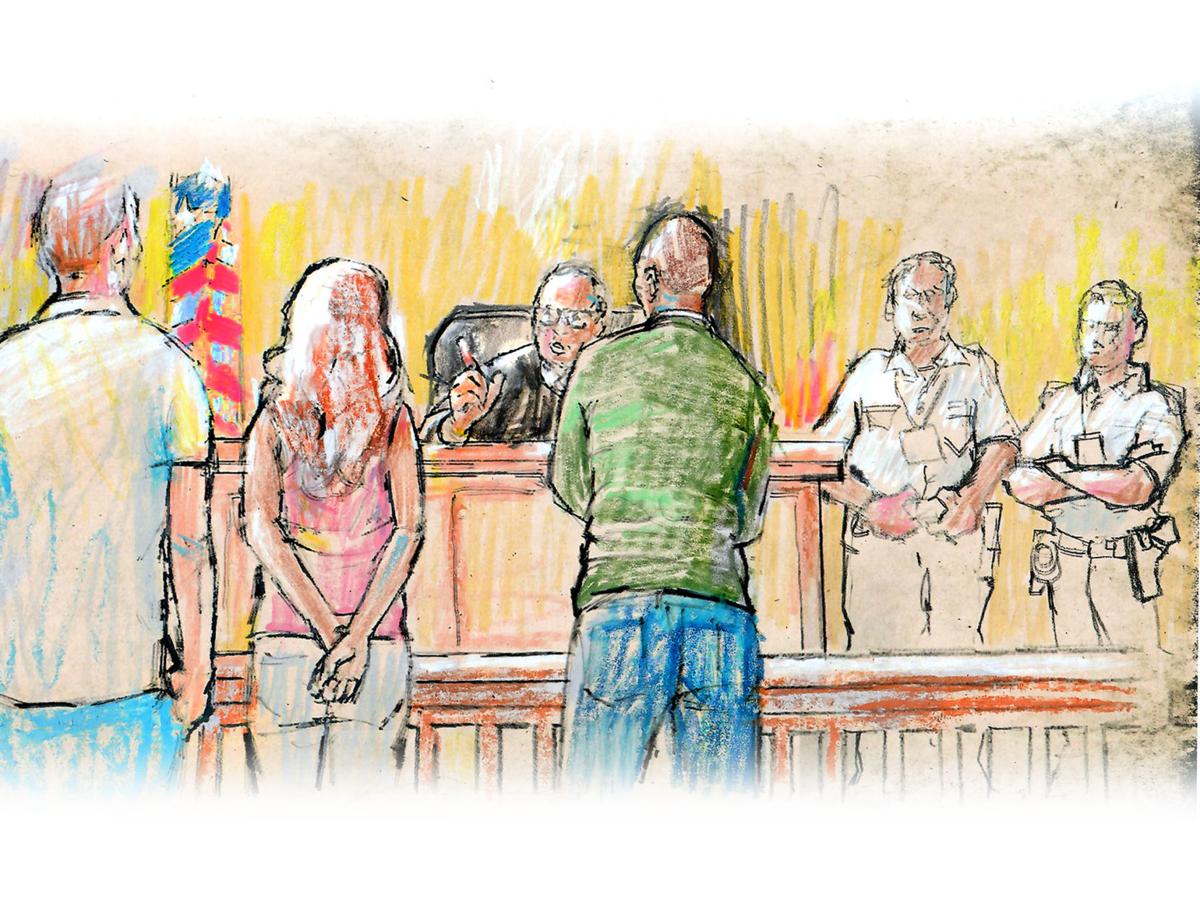 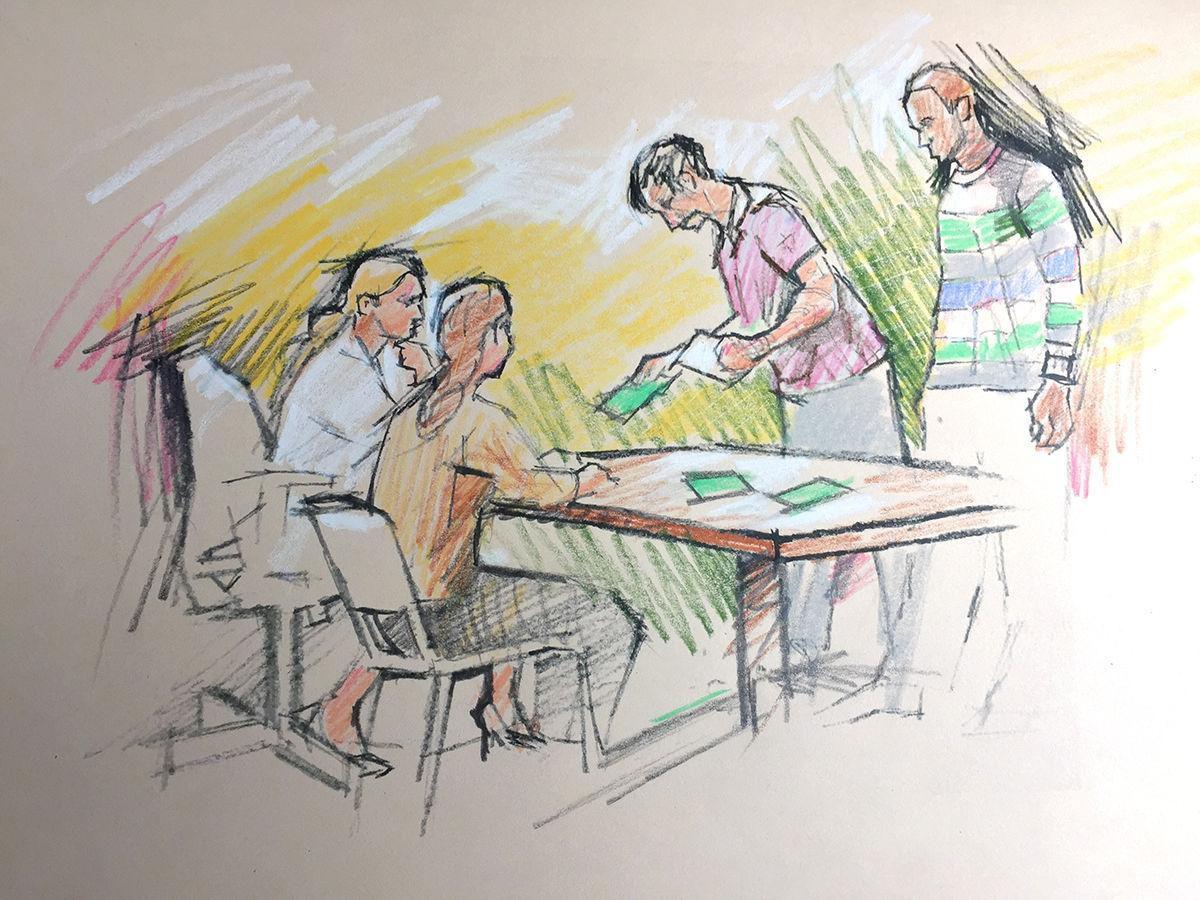 “All rise,” said the bailiff as she walked into the center of the courtroom in Mays Landing.

“That’s OK, everyone have a seat,” Judge Mark Sandson said as people, hovering just a few inches off their chairs, froze, then sat back down, some quietly laughing.

Under the fluorescent lights, Sandson looked out through large, square-framed lenses at the rows of people seated in wooden benches in the gallery.

Some faces were well-known — they had been coming to the criminal courthouse for more than a year as participants of the Atlantic/Cape May Vicinage’s drug court program, dubbed Recovery Court. They sat with relaxed smiles on their faces, talking to their neighbors with polite familiarity.

Others glanced around the room, taking in the scene for the first time, or fidgeted while waiting to hear their names called, staring down at their hands or straight ahead in stony silence.

On a recent Tuesday afternoon, there was no single way to describe what type of person defined a Recovery Court participant. They were tall and short; men and women; white, black, Asian, Hispanic; some younger than the legal drinking age, others with wrinkles and creases in their faces.

Despite differences in appearance, they all had at least a couple things in common: They had been arrested for a crime serious enough to appear before the county’s Superior Court, suffered from a substance use disorder and were sentenced to a strict rehabilitation program instead of jail time.

“Not everyone is qualified for the program,” said Harry Henley, program substance abuse evaluator, earlier that day sitting across from Sandson in the judge’s chambers. “We determine who gets in clinically. We use the DSM-5 (Diagnostic and Statistical Manual of Mental Disorders) to see who meets at least four of the criteria for drug court.”

In the jury box, Henley, wearing a gray suit and tie, sits with a dozen more evaluators, probation officers and intensive outreach treatment program coordinators who are assigned to specific participants.

N.J. DRUG/RECOVERY COURT by the numbers

The Atlantic/Cape May Vicinage's drug court program became operational Sept. 1, 2004. It was named Recovery Court and currently is one of the largest programs of its kind in the state.

130: number of participants who graduated from Atlantic/Cape May Recovery Court in May

Sandson, who sat on the bench surrounded by boxes and bags of flashlights, lanterns, measuring tapes, candy bars, other odds and ends, and a new Wilson NFL football, called forth alphabetically about seven people at a time to sign in at the prosecution’s table.

Taheira Mitchell, evaluator and intensive outpatient treatment coordinator, stood from her spot in the jury box and faced the 60 or so people sitting in the benches.

“The question of the day is this: What advice would you give to your younger self?” she announced and pulled out a pad of paper, ready to record the best answers and determine the winner of the NFL-official game football.

“Listen to your elders and play sports.”

“Be careful who you hang out with.”

“Fast money is not good money.”

When prompted by Sandson with the question, a man with salt-and-pepper hair and gray in his beard looked up at the judge and said in a soft, measured tone, “Try not to grow up too fast.”

As several people were awarded a “phase up,” which signified advancement within the program and fewer required testings and weekly court visits, fellow participants clapped and cheered from the gallery. They also got to pick from the nearby prizes beside the judge.

“It’s an incentive — a small one, but still nice,” Sandson said later.

In later court groups, participants continued to answer the question of the day:

“The ticket is not worth the ride.”

“Invest in Google,” which garnered laughs from every direction.

“Just because your doctor prescribes it, doesn’t make it okay.”

“Crack is wack,” said a woman in long, gray dress, her hand over her pregnant belly.

While easygoing conversation flowed in the courtroom that afternoon, the seriousness of the program lingered beneath the surface.

When a participant was a no-show, Sandson issued a bench warrant. When people appeared late to court and tried to enter unnoticed, probation officers notified the judge of their tardiness.

A smattering of participants were asked to stay behind in each session. One by one, they were called to the stand before the judge.

“You tested positive for THC. What is going on?” Sandson asked one man, who didn’t deny the drug use. “You can’t do marijuana in this program. It may be legal in a month, but you can’t do it.”

The man, looking down at his feet, was then handcuffed by bailiffs, escorted out of the courtroom and sent to do an overnight in county jail before returning to the program.

Another program participant, late for court that day, was called to the front of the room.

“Judge, he has missed treatment twice and when we go to pick him up at the address he gives us, he’s not there,” a treatment coordinator says in frustration, eliciting sighs and headshakes from probation officers in the jury box. “The same thing keeps happening over and over again.”

A bailiff produced another set of metal handcuffs and escorted the man out for more than one night in lockup for violating program requirements.

“Sometimes there’s more of a fight. I get people who scream and yell not-so-nice things as they go out,” Sandson said during a brief break between sessions.

As the last person in the last court session was called up — more than 160 people later — program evaluator Mike Frampus and drug court coordinator Vicky Golas collected a half-inch stack of green cards where participants wrote the names of friends and family they had lost to overdoses. The cards would be used to create a memorial in the front lobby.

The candy and prizes had been handed out. Announcements about births, pregnancies, engagements, housing placements and employment successes had been made.

Sandson stood at the bench ready to dismiss the Recovery Court participants from his courtroom and back out into the unpredictable world, where they would be expected to avoid triggers and put treatment strategies to use.

“God bless, stay sober and have a nice day!” he said.

The loss of a loved one to addiction is something thousands of New Jersey family and friends have in common.

In South Jersey, two counties are deciding to build new jails while another is choosing to maintain its current facility.

A bill to legalize marijuana will be discussed and possibly voted on Monday morning by the Senate Budget and Appropriations Committee.

MIDDLE TOWNSHIP — By March 1, South Jersey will have its first recovery high school for students committed to overcoming addiction or mental h…

A drug conviction may no longer be an impossible hurdle to casino employment for many people, if a bipartisan bill passed by an Assembly commi…

A vote could happen Monday in the full state Senate on a bill that would allow recovery court graduates to get casino employee licenses, said …