ATLANTIC CITY — Something never before seen in the U.S. gaming industry may happen in the Marina District before year’s end.

Golden Nugget Atlantic City could become the first land-based casino in the country whose internet gaming revenue matches or exceeds earnings from tables and slots.

Steve Ruddock, lead online gambling analyst for PlayNJ.com, said it is not surprising that Golden Nugget is “flirting with this milestone” and sees it as inevitable that online gaming revenue will eventually eclipse casino win. 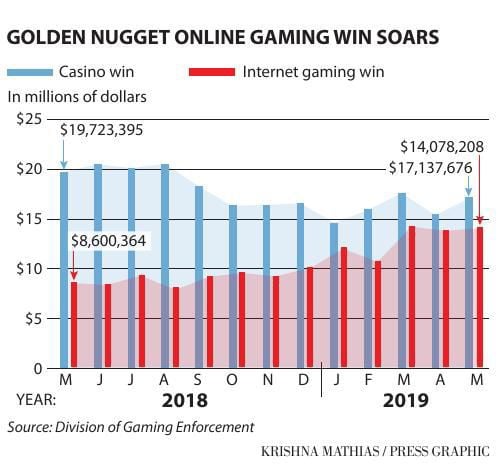 “It would surprise me if it happened during the busier summer months, but I wouldn’t be surprised to see online revenue surpass retail revenue as soon as October,” Ruddock said.

In four of the five months of reported revenue this year, the difference between earnings generated from Golden Nugget’s online gaming portfolio and the brick-and-mortar property has been less than $3.5 million. With the exception of Resorts Casino Hotel, whose online gaming revenue has jumped significantly since the introduction of legal sports betting, no other Atlantic City gambling parlor is even on pace to having the two revenue streams that close.

How big an impact has internet gaming made on Atlantic City?

Five years after legal online casino gaming was introduced in New Jersey, the jury is still …

In March, Golden Nugget and its online gaming partners — betfaircasino.com, playsugarhouse.com and nj.betamerica.com — set a record for internet gaming in New Jersey with $14.23 million in reported revenue, which was $3.4 million less than what the casino brought in from tables and slots. The next month, which was the second-largest ever internet gaming total ($13.85 million), the difference between online and casino revenue was less than $1.6 million.

Thomas Winter, senior vice president and general manager of online gaming for Golden Nugget, said that by focusing solely on the New Jersey market over the past five years, the casino and its online partners have an advantage over competitors whose attention is sometimes spread across multiple jurisdictions.

“As a trend, the growth is mostly online,” Winter said. “The good news is that it’s not really cannibalizing land-based revenue.”

ATLANTIC CITY — Casino gaming revenue increased by more than 22% in May, marking the 12th co…

Golden Nugget’s year-over-year casino win (table games and slots revenue) in May, according to the state Division of Gaming Enforcement, decreased by a little more than $2.58 million while internet gaming revenue increased by nearly $5.5 million. Golden Nugget was second among Atlantic City’s nine casinos in total gaming revenue — a combination of casino win, internet and sports betting — in May.

“If you look at Atlantic City, there isn’t a clear indication that this online gambling revenue is coming at the expense of retail revenue,” said Chris Grove, a managing director at industry research firm Eilers & Krejcik Gaming. “If anything, it seems to be almost wholly additive to retail revenue.”

June’s revenue figures are not due out until Friday, but Winter said online gaming revenue for Golden Nugget and its partners was about $13.6 million, a 62% increase compared to the same month last year.

Winter said the “simple” reason internet gaming’s growth is not coming at the expense of brick-and-mortar casino win is that the demographics of the players are different. Generally speaking, Winter said online players are younger than land-based gamblers and seeking a different experience.

The addition of sports betting in New Jersey, where more than 80% of all wagers were placed through a mobile application or online in May, has also boosted growth in the online market, Winter said.

“(Sports bettors) were not seeing themselves as casino players,” he said, “(but) most of the (online gaming) growth is coming from sports betting players who sign up to bet on sports and then will start playing a bit of roulette, blackjack or slots.”

Sports betting a 'surprising' success in NJ, but not a 'panacea' for casinos

Overall, Golden Nugget’s rise to the top of the New Jersey online gaming market has been aided by several factors, Grove said. The casino has placed an emphasis on internet gaming, continues to invest resources in the product and has not been averse to risk-taking, such as being the first operator to offer live-dealer games online.

“To put it more simply, they are bringing a better product that is executed more robustly than the majority of their competitors in the market,” Grove said. “So that idea of operational excellence is one of the primary reasons why Golden Nugget is in the position that it’s in, in terms of generating as much revenue as it does from online gambling.”

ATLANTIC CITY — The future of casino gaming is not coming — it is already here.

Golden Nugget also reaps the rewards from its multiple high-performing “skins,” or partners that use its license to conduct legal online gaming in New Jersey.

“(Online gaming) is a proven industry globally, and I think it’s taken some time for many U.S. companies to get comfortable with this new industry,” he said. “But I think there’s a recognition that it offers value to players and a chance to engage in hobbies and activities that they really enjoy.”

Winter estimates online gaming revenue will account for $440 million in the Atlantic City market this year, which would be an additional $150 million to the industry’s total.

“We believed the market was always there, but you had to offer a better product and user experience and educate people about online gaming,” Winter said. “I believe this (growth) will continue.”

No state has benefited more than New Jersey in the year since the U.S. Supreme Court overtur…

ATLANTIC CITY — Two kayakers who ran aground were rescued from the marshes that border West End Avenue Wednesday afternoon.

Legal sports betting to draw 15% of Americans during NFL season

More than 38 million Americans and nearly 1.6 million New Jersey residents say they will place a sports wager during the centennial season of …