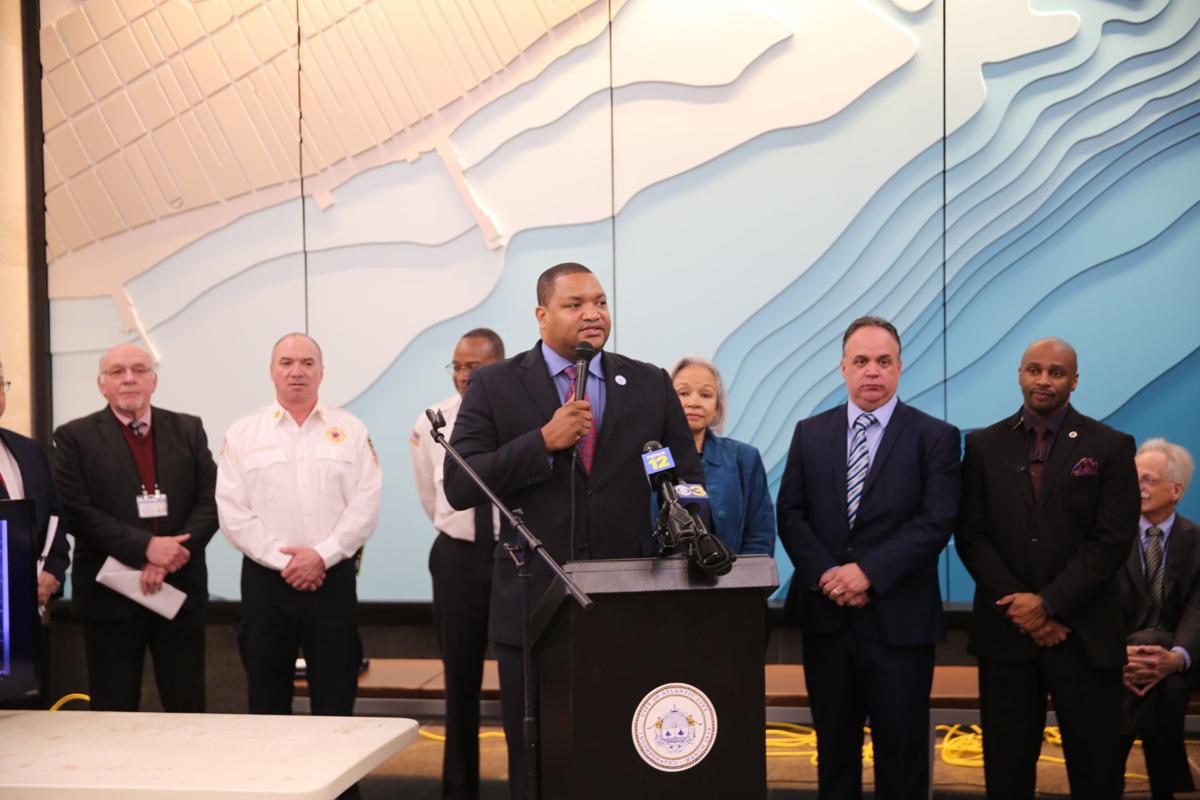 ‘Today, we are utilizing our most aggressive action (to date)’ to bring down the former Trump Plaza, Atlantic City Mayor Marty Small Sr. said during a news conference Thursday at Jim Whelan Boardwalk Hall. 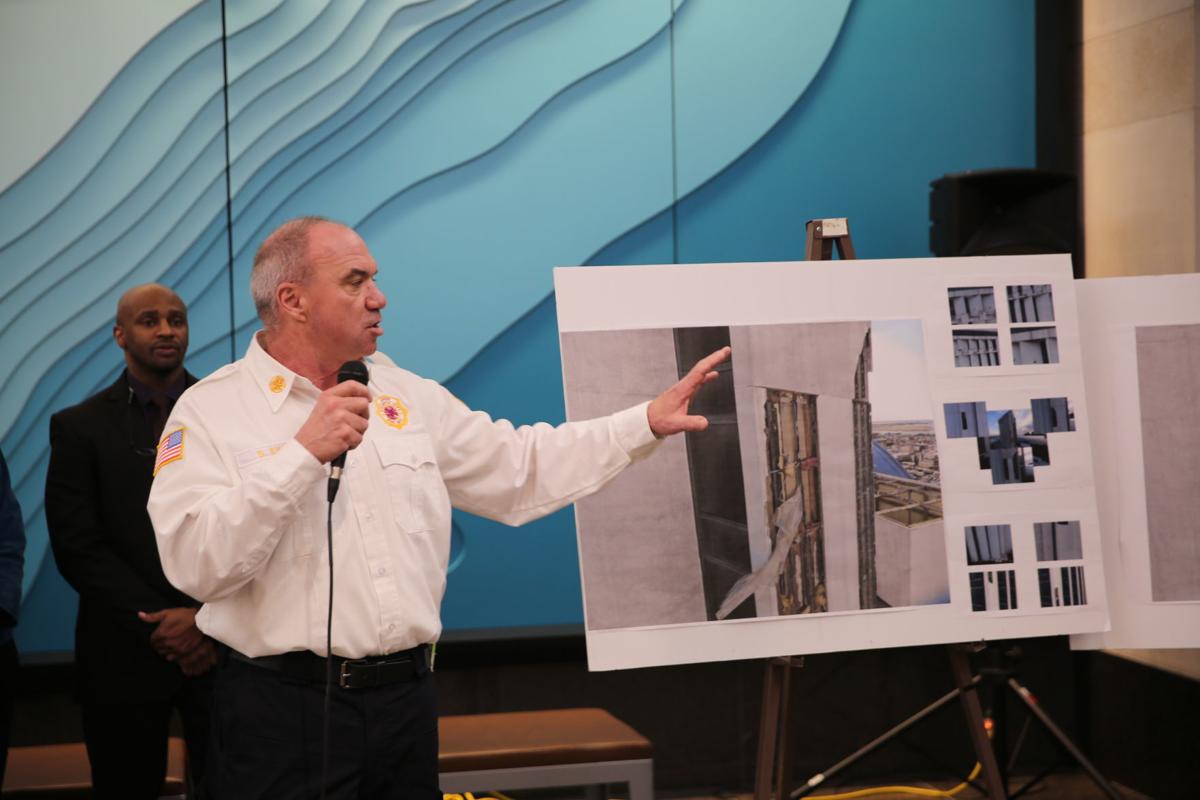 Atlantic City Fire Chief Scott Evans discusses the condition of the former Trump Plaza Hotel & Casino during a news conference Thursday at Jim Whelan Boardwalk Hall, where city officials announced they would be seeking a court order for the immediate demolition of the building.

During a news conference Thursday at Jim Whelan Boardwalk Hall, Mayor Marty Small Sr. said that although the city and the building’s owner, Carl Icahn, have been engaged in “good faith negotiations” over the future of the shuttered casino hotel, the “game has changed,” as the casino hotel’s condition continues to deteriorate.

“Today, we are utilizing our most aggressive action (to date),” Small said. “One of the most important things that we need to do is equip our professionals with the necessary tools to succeed. ... Our legal department has been working hand in hand with the State of New Jersey on this matter.”

The requested action by the city comes days after code enforcement and construction officials performed an emergency inspection of the building due, in part, to a video posted to social media Saturday that showed large pieces of debris falling off the facade onto the sidewalk below.

Icahn Enterprises has not sought a demolition permit, according to city officials. But a spokesperson for Icahn told The Associated Press the Wall Street investor had already agreed to tear it down.

“We are puzzled by the city’s action,” Hunter Gary, president of real estate for Icahn Enterprises, said in a statement. “In fact, we already decided to demolish the building, and have commenced the process, including finalizing contracts. If the mayor had simply called us instead of holding a press conference, we could have updated him as well.”

Small said Icahn, the billionaire hedge fund manager who acquired the building in 2016 when he purchased the debt of the thrice-bankrupt Trump Entertainment Resorts, “could not have been more generous” during their discussions and that the two were “on the same page about getting this building down.”

“Today, we are saying to Carl Icahn that we want this building torn down,” the mayor said. “We want the world to know that we mean business.”

The court filing says city officials believe Trump Plaza poses “actual and immediate danger to life,” and requests the immediate demolition or “wrapping” of the building to “protect the health and welfare of citizens and visitors.”

The city has placed a 24-hour police detail in the area of Columbia Place between the Plaza and Caesars Atlantic City to prevent pedestrians from using the sidewalk next to the building. Additionally, city officials said a portion of the Boardwalk would be fenced off as a precaution.

Small said estimates to demolish the former Trump Plaza were between $11 million and $14 million.

Dale Finch, director of licensing and inspection for the city, said that because of concerns about public safety and the potential risk to pedestrians, the decision was made to have the building investigated and inspected Monday morning. Finch found the property “unfit for human habitation or occupancy or use,” according to the court document filed Thursday.

“We determined that there were some unsafe conditions, as well as areas that cause imminent concern and hazard,” said Anthony Cox, a city construction official. “Our inspection detailed those areas, and we did, in fact, issue an imminent hazard (notice) to the owner and agent.”

Fire Chief Scott Evans detailed the extent of the deterioration of the building, noting that city officials used drones to take photographs of the facade nearly 20 stories above the street. The building’s location makes it susceptible to the elements, he said. The exposed portions of the building mean that water is causing the damage to spread more quickly.

“Sooner or later, the water is going to work its way into different areas,” Evans said. “And through expansion and contraction, these connections are going to fail. We’re going to see more panels fall. ... This is a serious hazard.”

City Council President George Tibbitt, a 30-year veteran of the construction industry, said the mayor has the “full support” of the city’s governing body.

“I (can) tell you with 100% certainty this building is failing,” Tibbitt said. “It’s an imminent danger right now. And I can guarantee you, if we get any type of major nor’easter type of hurricane off the coast, we’re going to have problems around here.”

Trump Plaza closed in 2014, one of four properties to shutter that year.

Icahn had previously sought about $5 million from reinvestment tax payments to use for the demolition of the Plaza, but the plan was stifled by political pressure.

Dispute over demolition of vacant A.C. hotel isn’t over until it’s over

ATLANTIC CITY — The vacant Trump Plaza will remain standing through the summer, despite previous comments from resort officials that the 34-ye…

‘Today, we are utilizing our most aggressive action (to date)’ to bring down the former Trump Plaza, Atlantic City Mayor Marty Small Sr. said during a news conference Thursday at Jim Whelan Boardwalk Hall.

Atlantic City Fire Chief Scott Evans discusses the condition of the former Trump Plaza Hotel & Casino during a news conference Thursday at Jim Whelan Boardwalk Hall, where city officials announced they would be seeking a court order for the immediate demolition of the building.