Atlantic City casinos reported just shy of $288.6 million in total gaming revenue in November, an increase of 16.5% over the same period last year, according to the state Division of Gaming Enforcement. November 2019 had one more Saturday than in 2018.

The $3 billion generated by the casinos in 2019 is significant for Atlantic City because it triggers an increase in the amount of payment in lieu of taxes the city receives from them. Based on state legislation passed in 2016, Atlantic City will receive $152 million from the nine properties for the 2020 budget, an increase of $20 million from the most recent casino tax payment.

The downside for the city is that the revenue benchmark also triggers a crediting mechanism that reduces the amount of investment alternative tax, or IAT, funds by nearly $14 million that the city is statutorily mandated to use for debt payments. 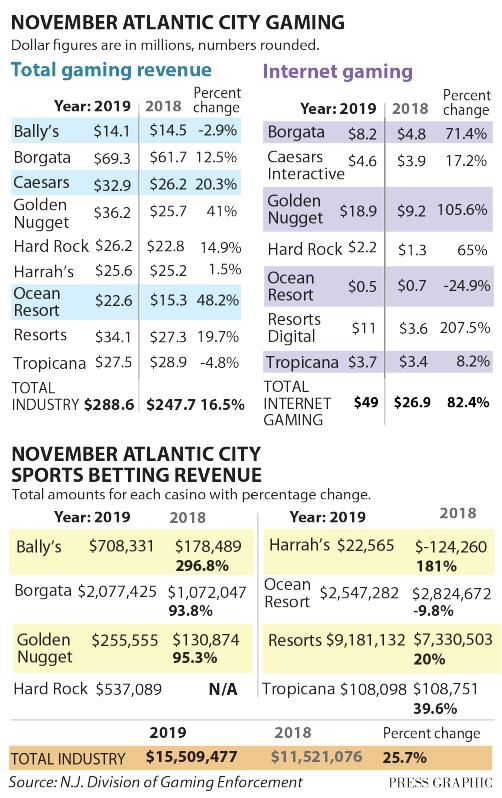 Lisa Ryan, a spokeswoman for the state Department of Community Affairs, the agency with direct oversight of Atlantic City, said officials “foresaw the situation, planned for it appropriately, and (are) in a good position to prepare a 2020 budget that is stable and works to keep Atlantic City affordable for working families while providing necessary public services.”

While acknowledging the city would be in a less than ideal situation as a result of the industry’s success, Mayor Marty Small Sr. praised the overall accomplishment.

“I know there were a lot of naysayers around 2014 who thought that we would never get to this level,” Small said. “We are far from the level of $5.2 billion that we were in 2006, but this is a step in the right direction.”

The industry last reported more than $3 billion in gaming revenue in 2012 ($3.05 billion), when there were 12 casinos and online gambling and sports wagering had not yet been introduced.

In 2018, Atlantic City’s total gaming revenue was $2.86 billion. After dipping to $2.56 billion in annual gaming revenue in 2015, the industry began trending upward, and 2019 marks the fourth consecutive year of market increases.

The addition of two properties in 2018 — Hard Rock Hotel & Casino Atlantic City and Ocean Casino Resort — and the introduction of legalized sports betting and the continued growth of online gaming all contributed to the revenue gains in 2019.

Total gaming revenue has increased for 18 consecutive months, beginning in June 2018 with the dual casino openings.

James Plousis, chairman of the Casino Control Commission, said it was “gratifying” for state regulators to “see another month of growth in Atlantic City.”

“All areas of the business, including slots, table games, internet wagering and sports wagering, outperformed last year and contributed to a combined increase,” Plousis said. “Importantly, this growth was not solely because two casinos reopened in 2018. The seven preexisting casinos reported a combined increase of $30 million, or 14.4%, indicating that there are opportunities for all of the operators to compete in this market.”

Rummy Pandit, executive director of the Lloyd D. Levenson Institute of Gaming, Hospitality & Tourism at Stockton University, said the industry “continues to surpass its revenue numbers largely due to the diversification of its revenue base, transforming from a gaming-centric market to a destination resort catering to multiple market segments offering gaming and non-gaming activities and services.”

The loss of the Miss America Competition, which starts this week in its new home in Connecticut, didn’t hurt the city’s casinos or put a dent …

ATLANTIC CITY — Sharon Anne Harrington was selected to serve as vice chairwoman of the Casino Control Commission for the upcoming year.

ATLANTIC CITY — Hard Rock Hotel & Casino executives challenged their staff to up their game in the new year — offering cash, prizes and bo…

Atlantic City casino revenue up 18% for best February since 2011

With brick-and-mortar casinos across the United States shut down to slow the spread of the new coronavirus, public health advocates are concer…

Atlantic City casinos on pace for $3 billion in gaming revenue

ATLANTIC CITY — Sports betting, online gaming and two new properties are helping push the casino industry toward a revenue benchmark in 2019 i…

Over 3,000 sign petition to change Atlantic City's form of government

ATLANTIC CITY — Businessman Morris Bailey is putting his money where his mouth is when it comes to his vision on how best to move the city forward.

What's next for Caesars, Eldorado merger now that shareholders have approved deal?

The multibillion-dollar merger of Eldorado Resorts Inc. and Caesars Entertainment Corp. was approved by shareholders of both companies last we…

ATLANTIC CITY — Sports betting has been an undeniable boon for the city’s casinos and their online gaming partners, while also helping to grow…

Ocean Casino will be in Atlantic City for a 'long time'

ATLANTIC CITY — At this time last year, Ocean Casino Resort was struggling financially and many industry watchers wondered whether it could su…