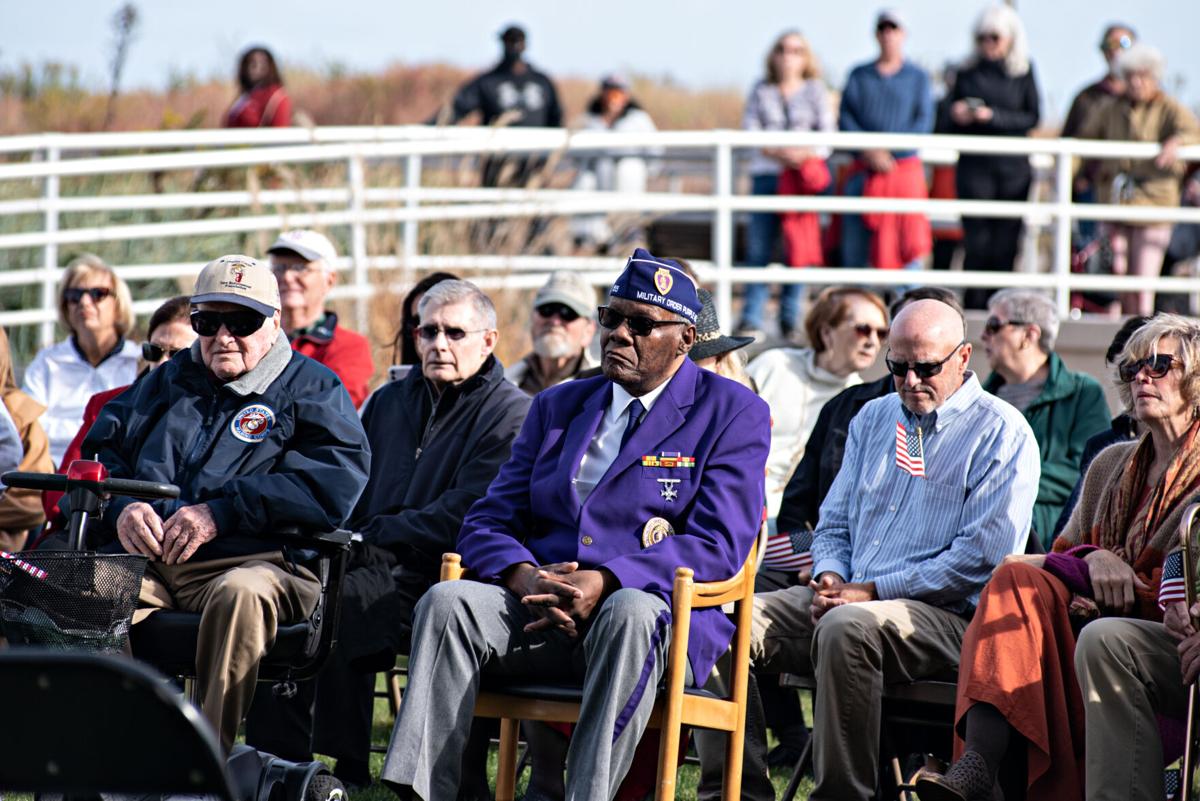 Marine Corps veteran Ronald Rease, center, was awarded a Purple Heart for his wounds received during his time in Vietnam. At left, Edward H. Hansberry, 98, served with the Marines during World War II. 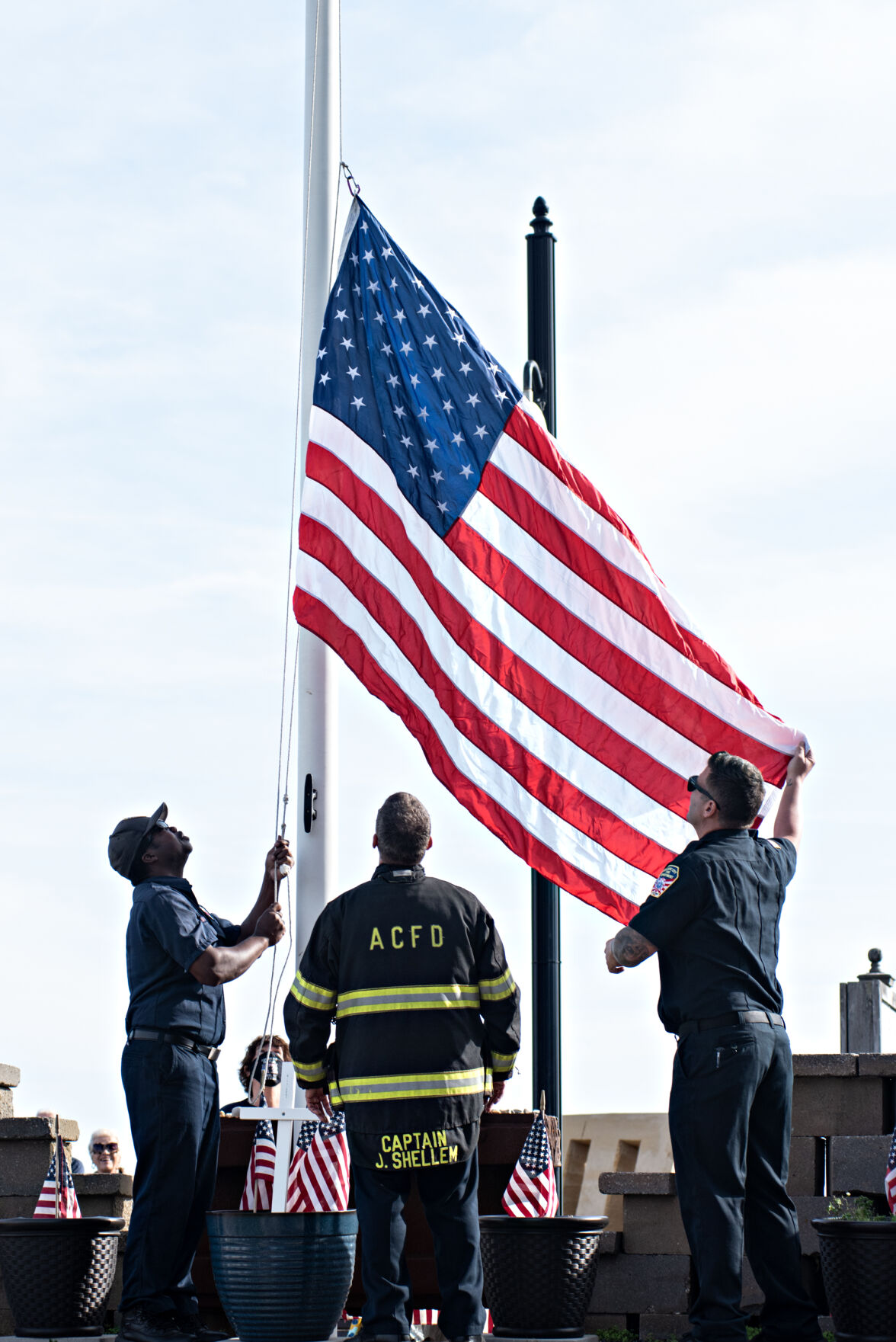 Atlantic City fire fighters raise a flag at the start of the Veterans Day ceremony Thursday at Jackson Avenue and the Boardwalk. 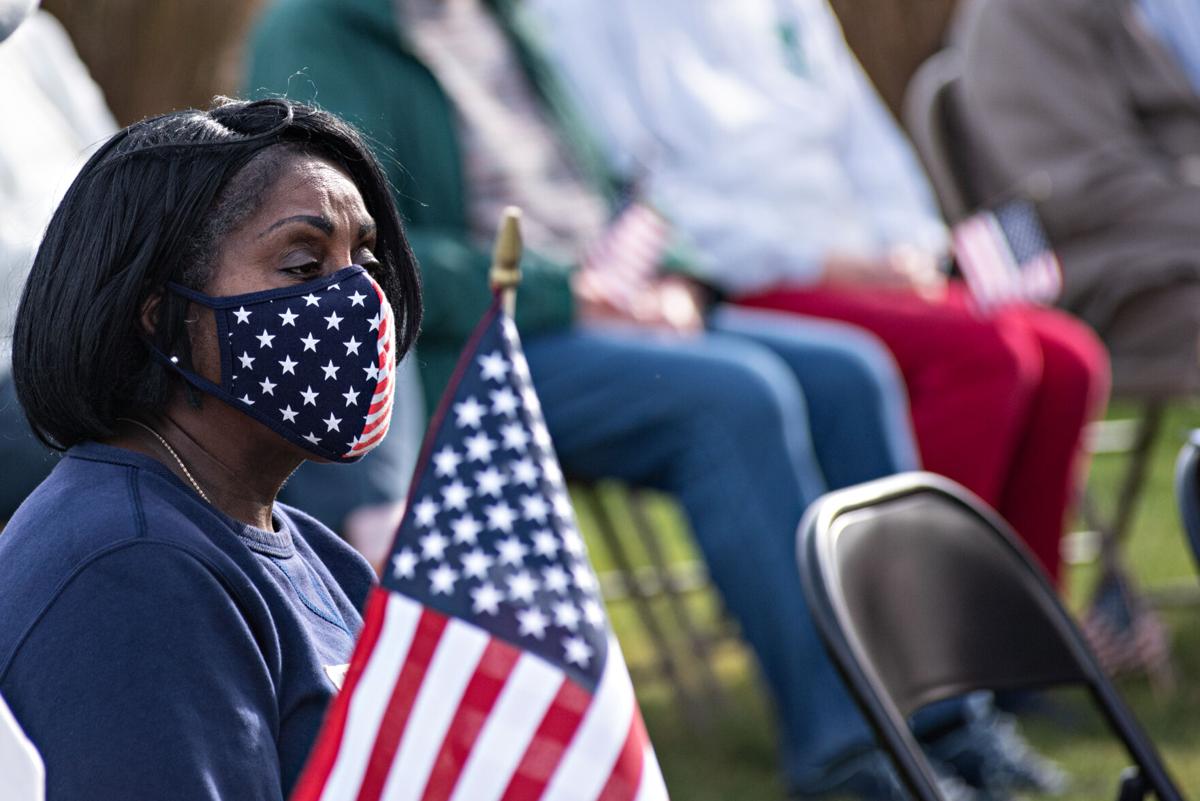 Local residents gathered at the Boardwalk and Jackson Avenue in Atlantic City to commemorate Veterans Day. 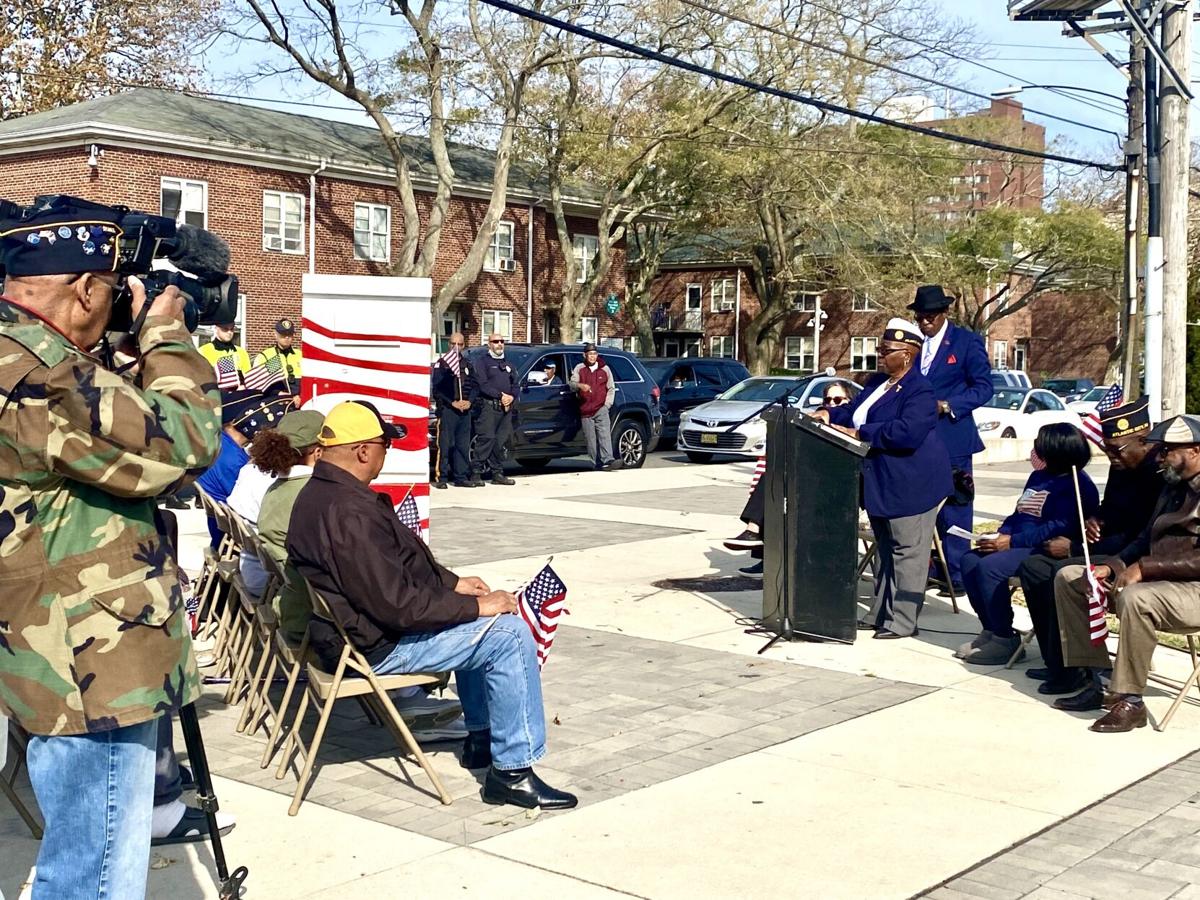 SELENA VAZQUEZ For The Press

ATLANTIC CITY — For Ronald Rease, a U.S. Marine Corps veteran of the Vietnam War, Thursday was not just another day, although it was “another day in life.”

Rease, 76, was a Purple Heart recipient who survived a hillside ambush that left him with a head injury, and most of his unit dead.

He assembled with over 100 others to commemorate Veterans Day by taking part in an annual event. The event was organized by Bob Pantalena, the Saracini-O’Neill Atlantic City 9/11 Memorial Committee and others on the Boardwalk at Jackson Avenue.

Telling the stories of veterans, living and deceased, were just some of the ways people throughout Atlantic City honored veterans here and at another event at Brown’s Memorial Park.

“I died three times. About 30 of us survived, but I remember they (people in his unit) kept throwing themselves on top of me to save me,” said Rease.

“Veterans, thank you for serving. Patriots, thank you for joining us in our tribute to veterans,” Pantalena told the crowd. “This is a day of honor, respect and appreciation of the 18 million living veterans, and the over 1 million fallen who are buried in the ground they fought to keep free.”

One of the honorees was Edward H. Hansberry, 98, an Atlantic City local who served as a demolition expert with the Marines during World War II for three years and five days, exactly.

Hansberry played a significant role in the Battle of Okinawa by getting on his hands and knees and defusing 40 land mines in an area the size of a football field, using a bayonet. His efforts helped U.S. tanks complete their mission and lead forces to victory.

He received a Purple Heart award after being struck in his arm, and the Navy Cross Medal, which is the nation’s second highest military medal, for his war efforts.

“They’re doing a great job right now. It’s a wonderful thing that people that participated in wars and defended our country can be honored,” said Hansberry, who has participated in the annual program since it started.

Over at Brown’s Park, named after Sgt. Harold Brown, the first black resident of Atlantic City to be killed in World War II, more than 50 people gathered to honor veterans.

“I’m happy with the turnout. I think it’s critical to uplift the veterans not just today, but every day,” said Councilman Kaleem Shabazz. “I’ve never been in the military, but I understand the sacrifices they’ve made.”

Shabazz said he’s been in office for six years and has hosted his Veterans Day ceremony every year, with the exception of last year due to the COVID-19 pandemic.

“Yes, we’ve protected everyone, but we still do. We took an oath,” American Legion Post 61 Commander Patricia Tatum said during the ceremony. “Everyone has a part to play. We served, and we still serve.”

Marine Corps veteran Ronald Rease, center, was awarded a Purple Heart for his wounds received during his time in Vietnam. At left, Edward H. Hansberry, 98, served with the Marines during World War II.

Atlantic City fire fighters raise a flag at the start of the Veterans Day ceremony Thursday at Jackson Avenue and the Boardwalk.

Local residents gathered at the Boardwalk and Jackson Avenue in Atlantic City to commemorate Veterans Day.