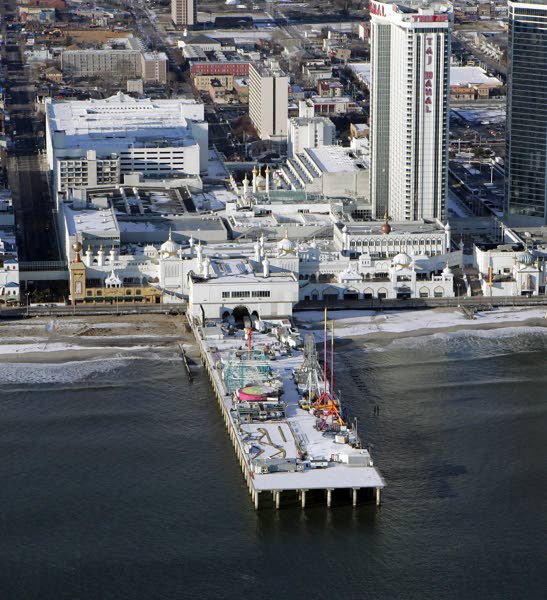 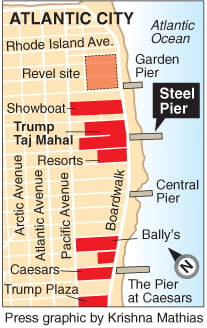 ATLANTIC CITY — Steel Pier owner Trump Entertainment Group announced Wednesday it plans to auction the 113-year-old amusement landmark across the Boardwalk from its Trump Taj Mahal Casino Hotel for as little as $2.5 million.

“We are a gaming company and Steel Pier is not part of the casino. Selling the pier to a new operator will be good for its new owner, for Trump Entertainment and for Atlantic City,” Trump spokesman Brian Cahill said in an emailed statement.

Most casino- and tourism-industry veterans were surprised, even though the decision comes after the company sold Trump Marina Hotel Casino and is looking to do the same with corporate offices in Atlantic City and a warehouse in Egg Harbor Township.

Steel Pier operator Anthony Catanoso was not among the stunned people. He was informed by Trump months ago because he and his three brothers, along with investment partner Ed Olwell, have leased and operated the property for more than two decades, offering rides and other amusements and concessions.

Their current agreement extends through 2016, so any sale won’t affect operations, said Catanoso, 53, of Cape May.

The Steel Pier sits within the Atlantic City Tourism District. Susan Ney Thompson, interim executive director for the Casino Reinvestment Development Authority that runs the district, did not respond to requests for comment Wednesday.

But Catanoso said he’s met with CRDA officials and is encouraged by the possibilities for expanding amusements and other nongaming offerings for families and children in Atlantic City.

Catanoso, who wouldn’t divulge his lease amount, hasn’t made an offer on Steel Pier yet, but hopes to — perhaps before the planned auction date on Aug. 25, he said.

“Atlantic City, right now, is a bit of a phenomenon. It’s a whole different animal,” said Catanoso, who also owns amusements in Seaside Heights, Ocean County, and Ocean City, Md. “We have, in Atlantic City, what I think is the ultimate family infrastructure, which is the beach and Boardwalk. We need to capitalize on that.”

Bidding on Steel Pier will start at $2.5 million, or about 8 percent of its $29.8 million tax assessment, which is normally lower than a property’s sale price, according to property records and a statement from CBRE Auction Services.

The low figure shocked Roger Gros, of the Las Vegas-based Global Gaming Business, who said he initially assumed the low price was more to attract bidder attention than anything else, perhaps in hopes of attracting an investor

“That even confuses me more — $2.5 million isn’t going to do a whole lot of good for the debt of the company,” Gros said. “They need to get between $10 million and $15 million to even make a dent in their debt.”

The company’s $300-million-plus debt situation and change in ownership prompted an executive reshuffling — and some dismissals — among its Atlantic City properties before Landry’s Inc. bought the Trump Marina for just $35 million with a plan to spend $150 million transforming it into a Golden Nugget.

But the extremely low starting price for the Steel Pier auction might mean Trump is in more trouble than people think — and it could spell trouble for tax revenues, Gros said, noting that other pier and ocean-property owners might demand lower assessments if the Steel Pier sells for $2.5 million.

“I’m sure they’re going to go back to the city and say, ‘Recalculate my appraisal,’” Gros said.

CBRE started fielding inquiries about the pier within hours of the auction plan going public, but it wouldn’t say who was calling.

“To invest millions and millions of dollars in Atlantic City for families, in this climate, that’s rolling the dice,” Gillian said. “And as long as I’ve known the Catanosos and how good they’ve been for Atlantic City — I wouldn’t as long as they are there.”

Famous for its early-20th century diving horse attraction and original host of the Miss America Pageant, Steel Pier has been completely rebuilt since it first opened to the point that none of the original structure remains. Yet its “storied history” is a major component that will entice buyers, said analyst Michael Pollock, of Linwood-based Spectrum Gaming.

“Assets like Steel Pier can have great potential as Atlantic City evolves into more of an entertainment destination,” Pollock said.

Catanoso said he thinks the Steel Pier likely won’t be redeveloped into anything other than what is is right now. But he has ideas to improve it: bigger roller coasters, new rides, partial enclosure, he said.

“You might have to hold onto it, but by no means is that the (only) use,” said Levin, noting it could be used for gaming, entertainment and retail.

The Pier is also zoned for residential use, according to city zoning law, but safety, environmental and other issues present obstacles.

“I don’t buy into the notion you need that pier to tap into that market. You may, but it doesn’t preclude that opportunity,” said Pollock, noting that the city could still use a broader marketing approach that promotes attractions in Ocean City or Wildwood to draw families.

1930: Steel Pier makes national news when Alvin ‘Shipwreck’ Kelly sits on a pole in front of it for seven days, a world record.

1940: The Miss America Pageant leaves the pier for Convention Hall, but WFPG-AM starts broadcasting there.

1953: Two Atlantic City Beach Patrol lifeguards use the Steel Pier as a starting point for a race around Absecon Island. What began as a $200 challenge became a summer tradition known as the Around the Island Swim.

1969: Fire levels the Marine Ballroom that hosted Sinatra, Nelson, the Stones and other top performers.

1973: After more than a decade of citywide economic decline, the Hamids sell the Steel Pier to a local investment group, including Sonny Goldberg and Milt Neustadter,

1976: WFPG-AM leaves the pier for offices on Atlantic Avenue.

1982: Fire destroys the pier. The rebuilt version is just 1,000 feet long and made entirely of concrete and steel.

1993: The Catanoso family’s Atlantic Pier Amusements Inc. takes over Steel Pier through a lease agreement with Trump, whose plans to build condos there were derailed by environmental regulators.

1997: A Broadway musical named for the structure garners 11 Tony Award nominations. Despite critical acclaim and a $7.5 million budget, it closes after a run lasting just two months.

2006: Trump announces plans to redevelop Steel Pier into a mixed-use complex of luxury condos and a small retail component. This also doesn’t happen.

2007: Atlantic Pier Amusements attributes a 25 percent drop in business to visitors’ fears that the proposed redevelopment would prevent the Steel Pier from opening – along with high gas prices.