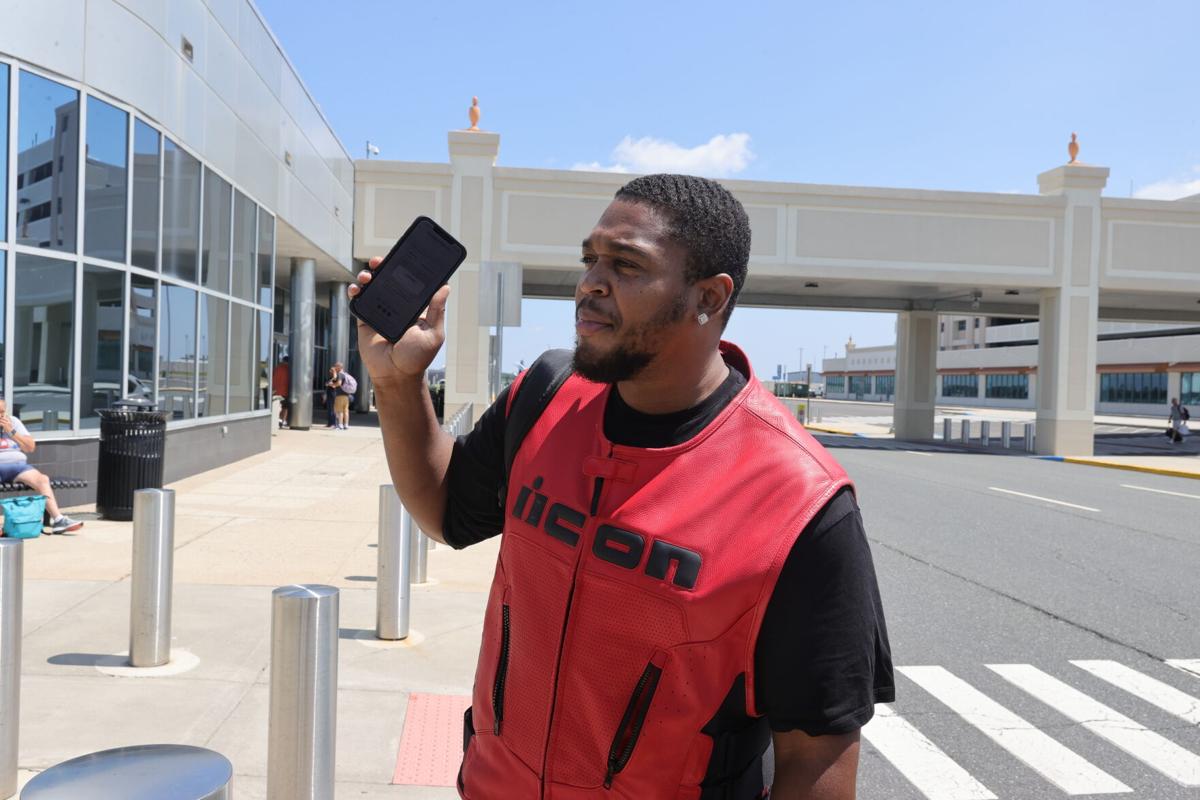 Kevin Beck, of Mays Landing, said Spirit Airlines canceled his flight to Orlando on Monday, throwing his kids’ first trip to Disney World into question. He was at Atlantic City International Airport in Egg Harbor Township trying to rebook, but said Spirit can’t get him on a flight until Wednesday. 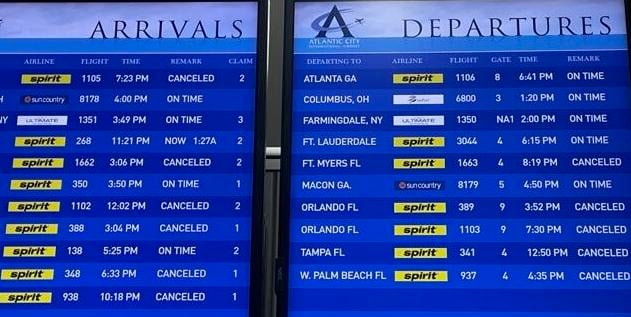 Spirit Airlines cancelled most of its inbound and outbound flights Monday, Aug. 2, as the arrivals and departures board shows. 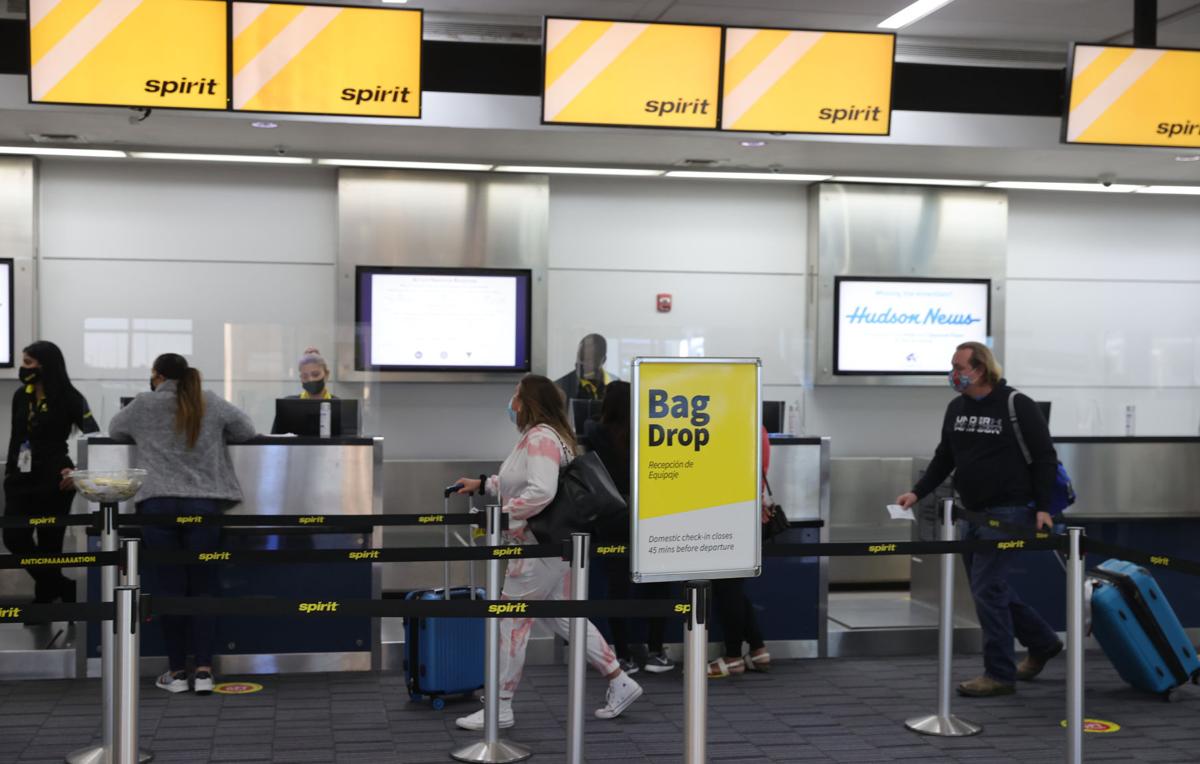 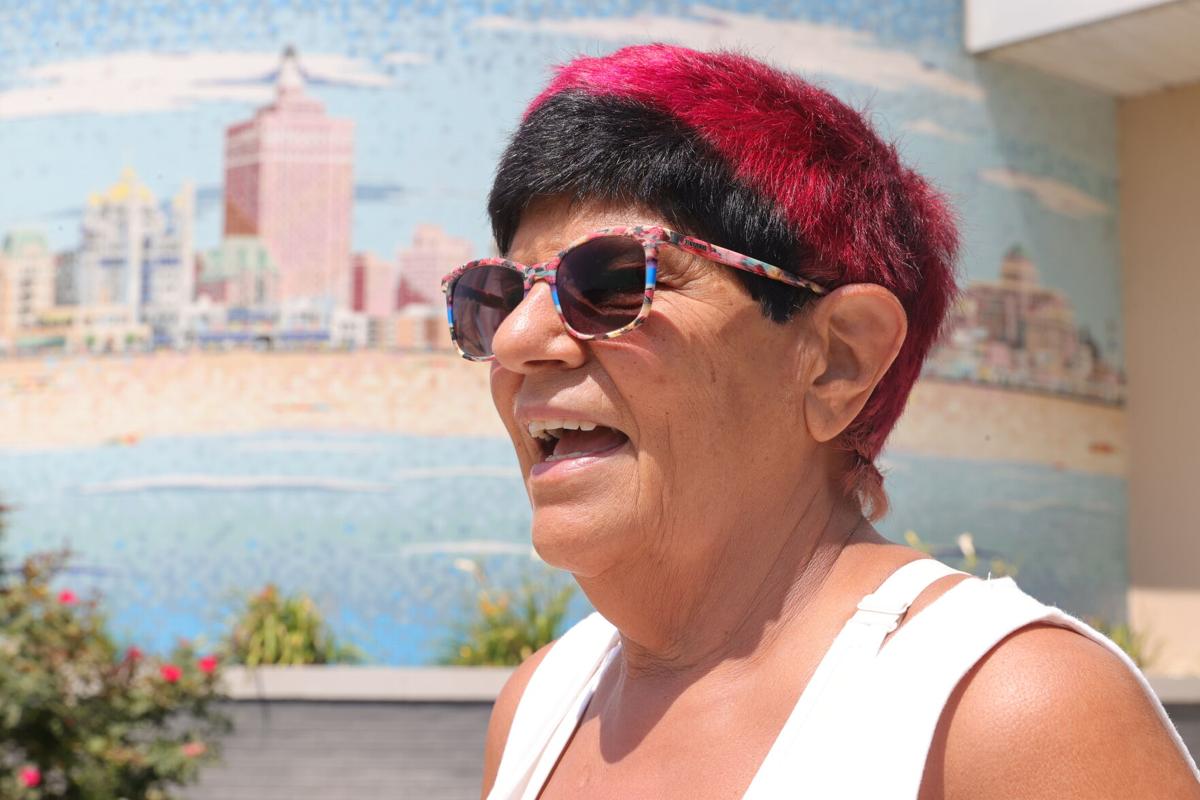 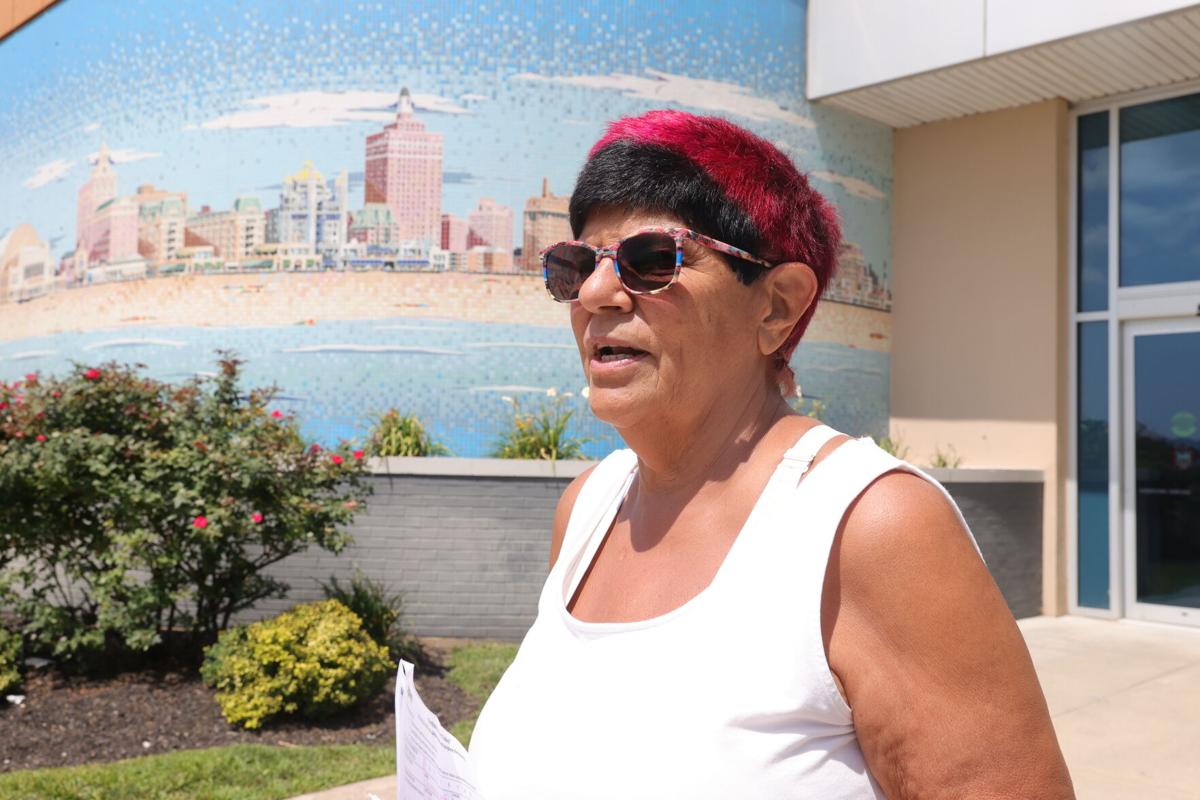 A spokesman for Spirit Airlines, the only commercial carrier that flies out of the airport, said the airline made some “proactive cancellations.”

The arrivals and departures board at the airport on Monday showed four of six Spirit departure flights canceled and six of eight Spirit arrivals canceled.

The spokesman said there was a rumor of a pilot strike, but said the airline is not experiencing any work action from any union or group. A spokesperson with the Air Line Pilots Association confirmed there was no strike underway.

Kevin Beck, of Mays Landing, was at the airport trying to rebook his flight for himself and three children to Orlando for their first trip to Disney World. It was supposed to leave at 3:52 p.m. Monday, but at about 9:15 a.m. he got an email saying the flight was canceled.

“I paid thousands of dollars to Disney World,” Beck said of his accommodations and tickets. “They said they can’t get me on a flight until Wednesday. They said they had no pilots.”

Neither Spirit nor the ALPA responded to questions about whether the airline was experiencing a shortage of pilots.

Beck, who said he was traveling with about 20 members of his family for the vacation, was hoping Disney World would allow him to change the dates of his visit without penalty.

“We’re working around the clock to get back on track in the wake of some travel disruptions over the weekend due to a series of weather and operational challenges,” wrote airline spokesperson Field Sutton in an emailed response to a request for comment. “We needed to make proactive cancellations to some flights across the network, but the majority of flights are still scheduled as planned.”

In June, American Airlines and Southwest Airlines canceled hundreds and delayed thousands of flights, angering travelers. The airlines have blamed labor shortages as they struggle to get back to full capacity after a long hiatus due to the COVID-19 pandemic, as well as the effects of weather.

Carole Fischer, of Bridgeton, said she drove an hour to the airport to buy tickets for an October trip, and was told no tickets would be sold. Tickets are much cheaper when purchased at the airport than online, she said.

“They are not allowing anyone to purchase tickets,” Fischer said. “There have been a lot of flight cancellations, but I don’t know what one has to do with the other.”

A staff member at the airport, contacted on Monday morning, said he could not comment on delays or cancellations. Kimberly Testa, spokesperson for the South Jersey Transportation Authority, which operates the airport, directed questions to Spirit Airlines on Monday.

Carol Cosentino, of Ocean City, was also trying to purchase multiple tickets for travel in August and September, and was turned away.

“She said it was for unforeseen reasons,” Cosentino said of the reasons given for no sales today. She was annoyed the airline hadn’t put anything on its web site letting people know not to come to the airport to buy tickets.

“The CEO comes on every time you fly and says he’s changing things and making things better,” Cosentino said. “This is not better.”

Commenters on the airline’s social media pages and others have expressed frustration with the cancelations.

“They offer no help to customers and just keep raising the prices on flights,” wrote a woman who emailed The Press of Atlantic City. “I have a guest that has had two flights canceled.”

Spirit departures were canceled Monday to Tampa, West Palm Beach, and Orlando (2), Florida. Departures to Atlanta and Fort Lauderdale, Florida, were listed as on time.

Listed as on-time arrivals were from Fort Lauderdale, Myrtle Beach, South Carolina, and one Orlando flight.

“We understand how frustrating it is for our guests when plans change unexpectedly, and we’re working to find solutions. We ask guests to actively monitor their emails and flight status before heading to the airport,” continues the statement from Spirit Airlines. “As a team, we strive every day to get our guests where they need to go on time. Our focus will continue to be on taking care of our guests.”

At ACY, one airline loses altitude while another takes off

The pandemic threatened the existence of some airlines, all but cutting off air travel for months, and put turbulence in their path back to th…

Spirit Airlines to expand flights this fall from Atlantic City

A look at where Spirit Airlines flies from Atlantic City International Airport.

A look at where Spirit Airlines flies from Atlantic City International Airport.

Kevin Beck, of Mays Landing, said Spirit Airlines canceled his flight to Orlando on Monday, throwing his kids’ first trip to Disney World into question. He was at Atlantic City International Airport in Egg Harbor Township trying to rebook, but said Spirit can’t get him on a flight until Wednesday.

Spirit Airlines cancelled most of its inbound and outbound flights Monday, Aug. 2, as the arrivals and departures board shows.