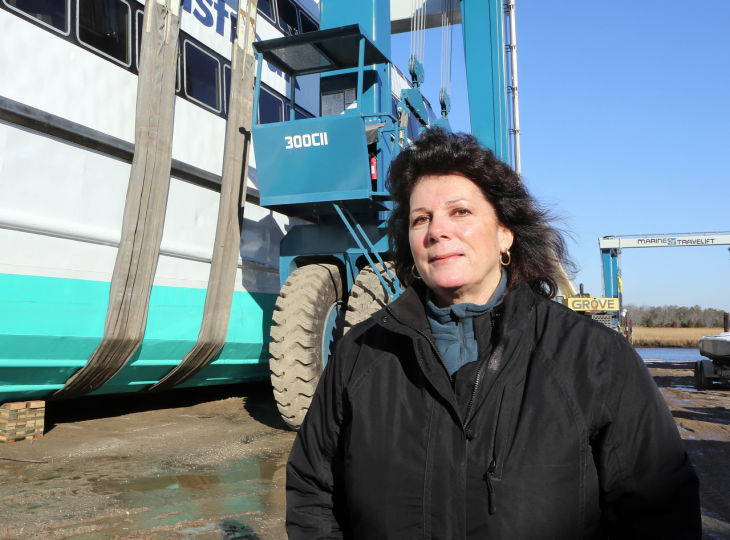 Betty Jean Yank, of Yank Marine, says the marina on the Tuckahoe River in Upper Township will be moving its 200-ton boat lift to its Dorchester Yard in Cumberland County, which means it will be handling boat repairs from ships as far away as the Carolinas and Maryland. 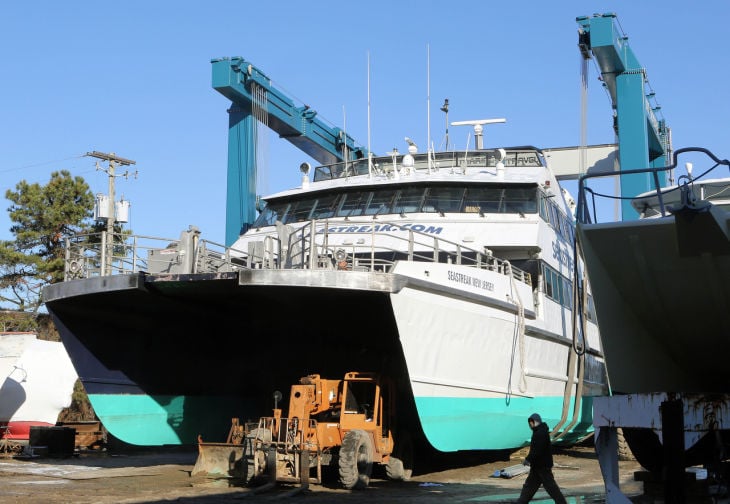 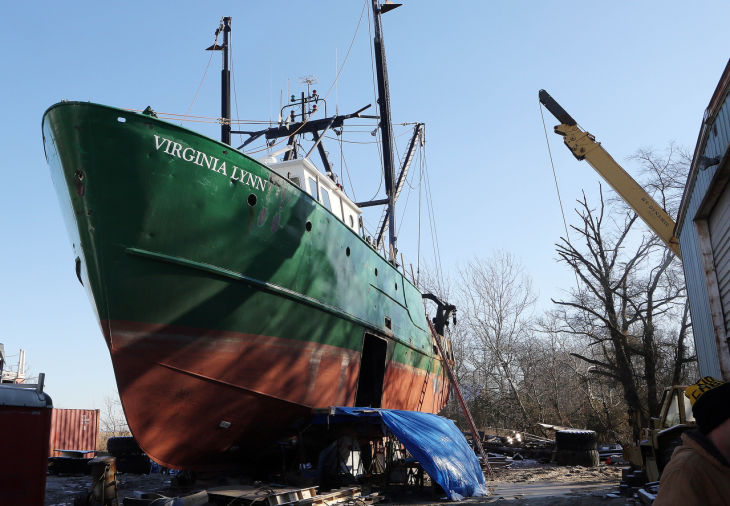 Yank Marine in Tuckahoe is a major repair center for commercial ships. Yank Marine in on the Tuckahoe River Upper Township will be moving its 200-ton boat lift to its Dorchester Yard in Cumberland County, which means it will be handling boat repairs from ships as far away as the Carolinas and Maryland.

Seastreak is a high-speed North Jersey passenger ferry that was recently hoisted from the Tuckahoe River at Yank Marine Inc., an Upper Township shipyard.

A towering 300-ton lift picked the boat out of the water like a child’s bathtub toy as boat captain Jason Reimer supervised.

Yank Marine, which has a sprawling boatyard off Mosquito Landing Road, is one of several South Jersey shipyards that services recreational or commercial vessels. Its specialty is repairing larger fishing and passenger vessels from as far away as Virginia and Maine.

“If we go somewhere closer (in North Jersey), we have to use a dry dock,” Reimer said. “We like working here better.”

New Jersey’s boat-building industry has suffered significant setbacks since the 2007 recession, particularly among the state’s shrinking recreational market. But South Jersey’s marine industry has sustained itself in other ways, largely by supporting the commercial-fishing industry and marine construction projects. For some marine companies, business has never been better.

“The commercial end of the boat industry did not take a hit, even during the recession,” said owner Bette Jean Yank, of Upper Township.

Besides its shipyard in Upper Township, Yank Marine has a second yard in Cumberland County’s Maurice River Township that it uses for larger vessels.

“Boat-building was once a major industry here in Cumberland County on the Maurice River. Our yard was owned by the Delaware Bay Shipbuilding Co. in the 1930s. They built minesweepers and sub-chasers for World War II,” Yank said.

Today, Yank is the area’s only commercial-boat builder. The company works on New Jersey State Marine Police boats and the U.S. Coast Guard’s smaller vessels. It recently signed a contract to build two Hudson River ferries for New York Waterway. Yank is working to get financing for a 600-ton travel lift, one of the largest on the East Coast. This would help the company expand its service to the biggest boats in the Mid-Atlantic from its yard off the Delaware Bay.

“No lift, no work,” said Yank Manager Aaron Duffy, of Millville. “Our industry relies so much on the lifts. It’s like the factory for us.”

But several other shipyards, in places such as Dorchester, Leesburg and Tuckahoe, keep the region’s commercial and recreational boats afloat.

Dorchester Shipyard Inc., which has 20 employees, often has a waiting list for customers at its Cumberland County yard off the Maurice River. It recently received a $950,000 federal maritime grant to build a new dry dock to supplement the rail system it uses to haul vessels as big as 500 tons out of the Maurice River. This has the potential to double the shipyard’s work capacity, leading to more jobs, said shipyard manager Dan Pron, of Middle Township.

The company in December worked on a 160-foot Weeks Marine construction barge that is used in various New Jersey projects. Pron said the shipyard often gets boats from as far away as Rhode Island and the Carolinas.

“Right now we don’t have the capacity to take on more than three or four boats at a time,” Pron said.

Phil Risko, of Middle Township, owns Boat World Marina in Dorchester, a Maurice River village that is home to several marine-trades businesses such as Allen Steel, which is dismantling the 320-foot-long ferryboat MV Cape May.

“I think it’s interesting to see what’s going on in Maurice River Township,” Risko said. He notes that South Jersey has a storied marine history, both for building boats and maintaining them.

“The Dorchester yards built World War I minesweepers,” he said. “Since then, they’ve built all kinds of stuff.”

“Barge work and marine construction has been a boon for us,” Risko said. “We charter barges and tugs to job sites.”

Likewise, he can get his boats, tugs and barges repaired quickly and competently in South Jersey, he said.

“We never want to take equipment out of state. The best value is here,” Risko said. “I’m comfortable using any of the local yards.”

The state’s lucrative commercial-fishing industry relies on these boatyards to keep its fleet in working order.

Keith Laudeman, owner of Cold Spring Fish & Supply in Lower Township, said his industry would have a much tougher time functioning without the support and infrastructure of South Jersey’s marine trades

“It seems there are some good shipyards in South Jersey. It’s convenient to have somewhere you can drive to and check on repairs instead of being out of state,” he said. “And it would be a higher cost to send my boats elsewhere.”

If Yank Marine succeeds in securing $6 million in financing for its 600-ton lift, its East Coast customers will not have to travel to places such as Norfolk, Va., for service. The 53-employee company could double in size in just a few years.

UPPER TOWNSHIP — A Tuckahoe boatyard finished the first of two new ferries that will start taking commuters to jobs in Manhattan this year.

Betty Jean Yank, of Yank Marine, says the marina on the Tuckahoe River in Upper Township will be moving its 200-ton boat lift to its Dorchester Yard in Cumberland County, which means it will be handling boat repairs from ships as far away as the Carolinas and Maryland.

Yank Marine in Tuckahoe is a major repair center for commercial ships. Yank Marine in on the Tuckahoe River Upper Township will be moving its 200-ton boat lift to its Dorchester Yard in Cumberland County, which means it will be handling boat repairs from ships as far away as the Carolinas and Maryland.