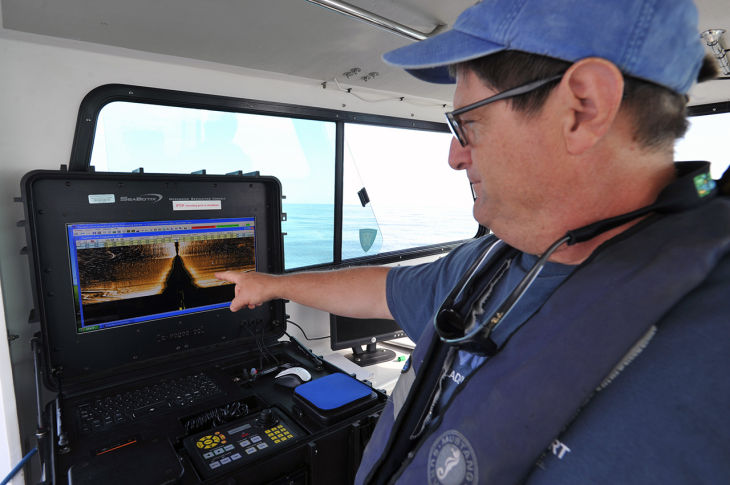 Richard Stockton College professor Pete Straub, of the Smithville section of Galloway Township, looks over sidescan sonar images of the wreck of the tugboat Patrice McAllister on Tuesday in the Atlantic Ocean off Little Egg Inlet. 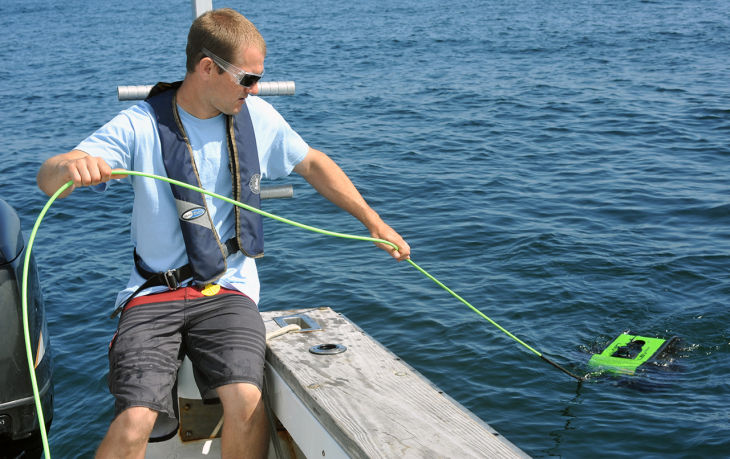 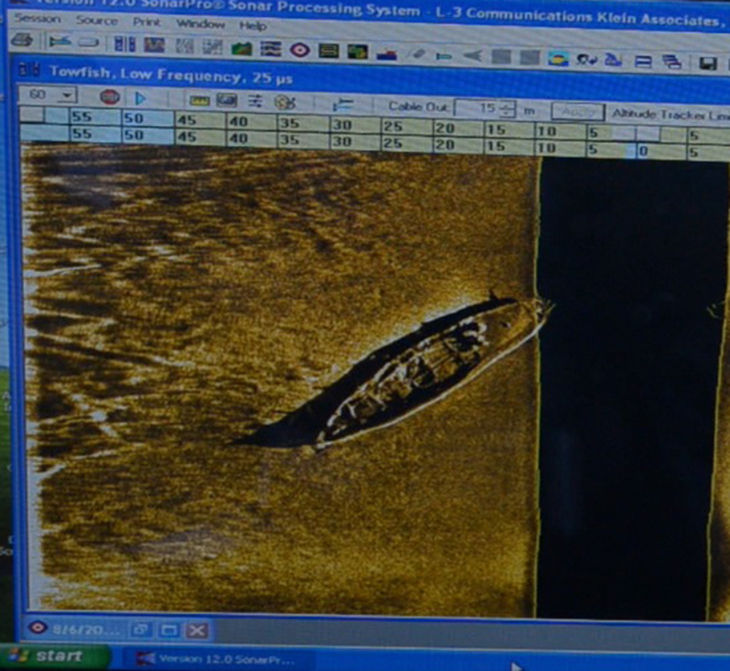 A sidescan sonar image of the tugboat Patrice McAllister 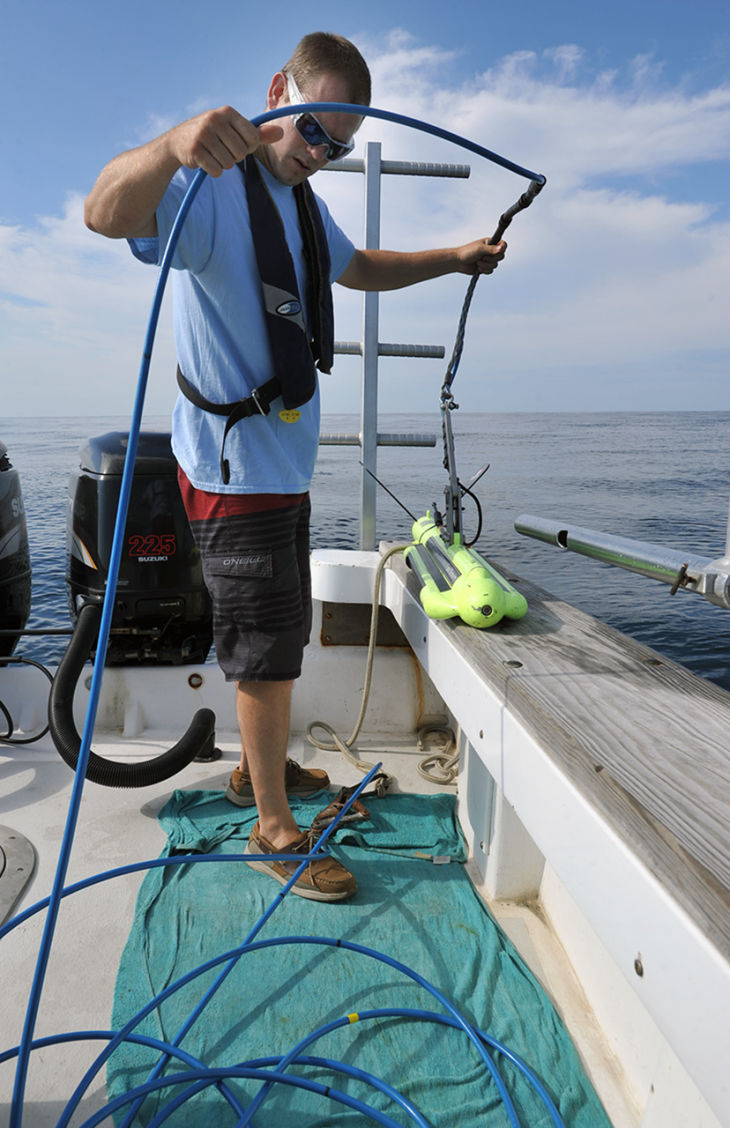 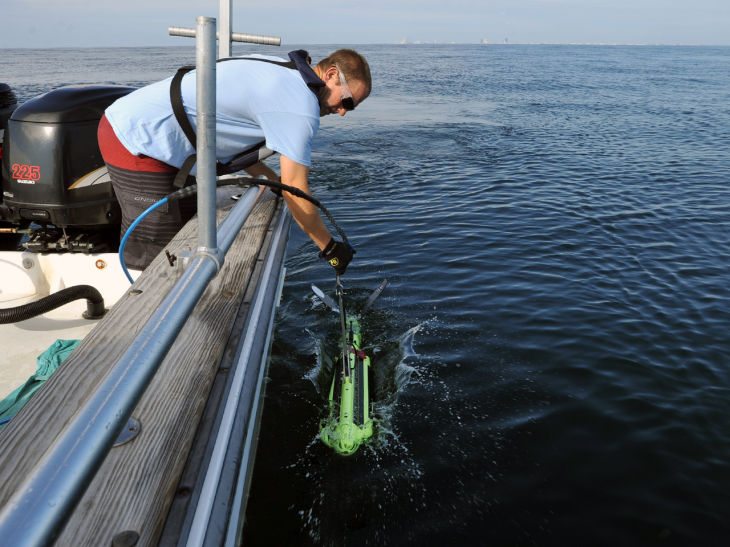 Shadows beneath the sea can say very little or a lot, depending on what you are looking for.

In the case of the Patrice McAllister, a wrecked tugboat that has been under 55 feet of water since 1976, the lack of a shadow on a sonar screen was intriguing to Pete Straub, a Richard Stockton College professor.

Prior to Hurricane Sandy, the sonar image showed a massive shadow. But in March, the first time since the storm that Straub went out to survey the dozens of shipwrecks off South Jersey, the shadow was gone. His theory: Sandy’s storm surge was so violent that it ripped up boats several dozen feet below the surface.

Straub and other Stockton professors are studying the “natural” shipwreck reefs to better understand how the nearby artificial reefs, made of recently sunk ships and rail cars, will grow and change. Students also are brought out to sea to teach them how to use complex technological equipment, including sidescan sonar and remotely operated vehicles, or ROVs.

Some of the shipwrecks off New Jersey date to the early 1800s, and understanding how wildlife colonizes the various structures as well as how the reefs may change during strong storms will help scientists make recommendations for future artificial reefs.

By mapping the reefs and understanding how the structures may change, Straub said, divers and others who use the structures will know more about what they are getting into when going beneath the surface. “In many cases, the divers may not understand the lay of the reef,” Straub said. “If you map them, they get a much better idea of how they sit.”

This isn’t just about providing the divers and fishermen with more information about the wrecks, Straub said. “This is part of our history.”

The water just a few miles off the coast was clear and slate blue. The lack of nutrients from the shore means less algae and microorganisms in the water. This mid-August day, the sky was clear and the ocean surface like glass, with just enough of a swell to remind boaters they’re not in a lake.

Atlantic City’s skyline is distant but obvious. But turn away from land, and the only distinguishing characteristic is the large buoy that marks the three-mile limit. This is known locally as the wreck buoy because beneath it are about eight shipwrecks within about 2 square miles, said Steve Evert, Stockton’s marine field station manager.

The Patrice McAllister is one of them. The 94-foot tugboat, built in 1919, was being towed to Jersey City on Oct. 4, 1976, when a storm caused the boat to sink. It has sat there since, on the sandy ocean floor, upright, perfectly intact. Over the years, northeast star coral mussels encrusted parts of the hull and fish moved in, drawing divers and sport fishermen.

Prior to Sandy, the sidescan sonar image of the boat clearly showed the three levels of the boat.

“When we went back and looked at it early this season, it looked like a canoe,” Straub said.

Evert was driving the boat. As he arrived at the wreck, he instructed assistant Nate Robinson to drop a buoy to mark the spot. Evert first wanted to get a good image of where the wreck might be and any other nearby wreckage by using a sidescan sonar.

Robinson gently plopped the neon green torpedo-shaped sonar device into the water. Evert slowly drove the boat, towing the sonar back and forth, almost as if mowing the lawn. The image of the bottom showed up in real time on a computer screen, but the ocean is so flat that the sonar sound waves reflected off the surface, creating a false return.

“You always look for straight lines. Rectangles don’t appear in nature,” said Tara Luke, a Stockton biology professor who studies deep sea corals. That’s how they know the false return is definitely not the Patrice McAllister.

Then, almost exactly on cue, the outline of what appeared to be the hull of a boat showed up on the screen. But the shadow that appeared in previous sonar images was gone. The Patrice McAllister clearly is missing a huge chunk. Evert took several more passes, trying to find the rest of the boat with the sonar device, but nothing showed up.

“You wouldn’t think a hunk of metal the size of this boat would go very far,” he said.

He decided to send down the ROV to see what’s left of the tug.

Straub and Robinson performed a few checks with the robotic vehicle, which looks like a remote-controlled minivan and is about the size of a suitcase. Robinson gently tossed the ROV in, and Straub began to send the machine down to the bottom using what feels like a gigantic old-school joystick. “Flying” the ROV feels like a complicated video game — one in which the character is a $150,000 machine paid for with a National Science Foundation Grant

The sunken boat gradually came into view as the ROV’s camera moved closer. As Straub moved the ROV carefully along the boat’s stern, he saw what looked like sheet metal ripped into shreds. “Right about now we should be hitting a wall,” he said. “It’s gone.”

A three-tiered boat, sunk in 55 feet of water for almost 37 years, had been ripped down to one tier by Sandy.

The reefs and wrecks close to southern New Jersey’s coast are in 30 to 100 feet of water. That sounds deep to people used to the 10-foot diving well of a swimming pool, but compared to the ocean, it’s a puddle.

But when extremely strong storms move in, the size of the waves can churn up the bottom. Wave heights during Sandy reached or exceeded 30 feet offshore, according to some buoys the night of the storm.

The evidence of the aftermath is clear along much of the reefs, Evert said. Some areas where the Department of Environmental Protection sunk reef balls have almost completely covered with sand. Other areas have been scoured out. Evert and Straub have seen this firsthand with the ROV.

“The storm was of such an intensity and the waves were of such a height that the 50-60 foot bottom was probably completely scoured and stirred up,” Straub said. “There’s fields of reef balls that appear to just be poking up out of the sand.”

Richard Stockton College professor Pete Straub, of the Smithville section of Galloway Township, looks over sidescan sonar images of the wreck of the tugboat Patrice McAllister on Tuesday in the Atlantic Ocean off Little Egg Inlet.

A sidescan sonar image of the tugboat Patrice McAllister