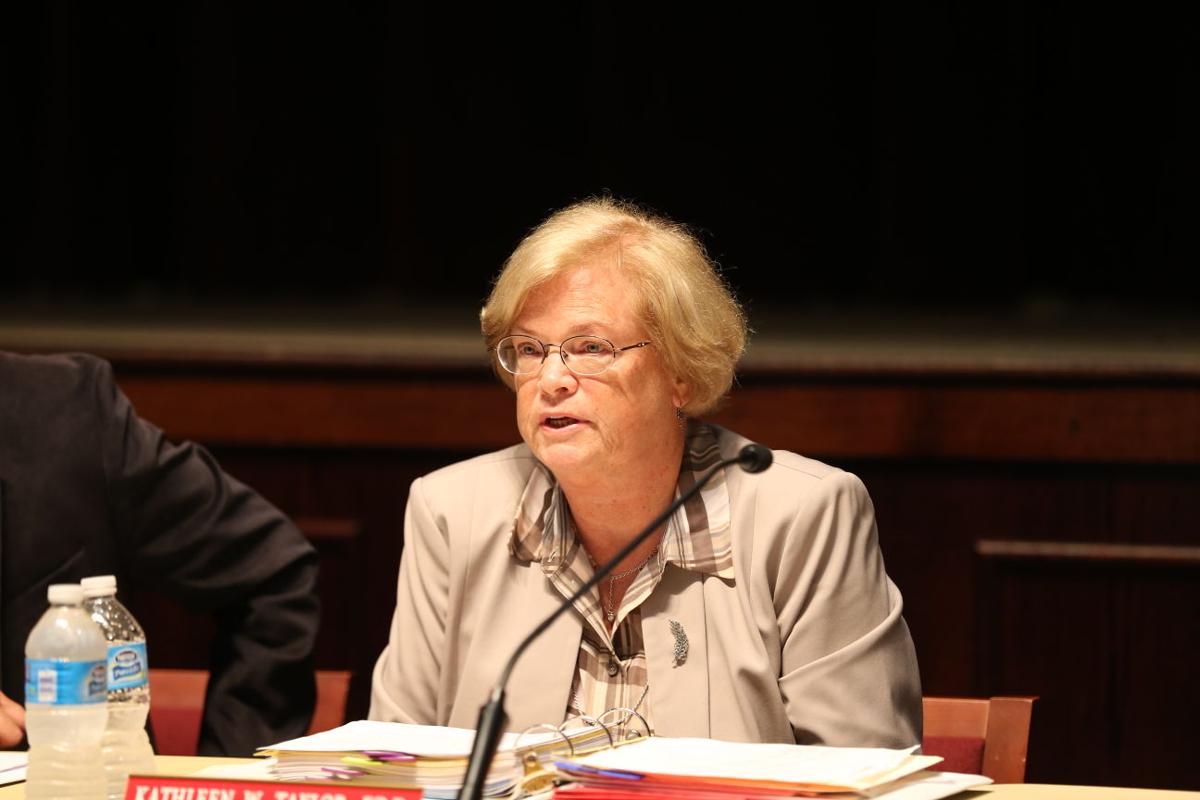 Kathleen W. Taylor, ED.D Superintendent of School speaks during Board of Education meeting about the suicide of a second student in less than a year at Ocean City High School, Wednesday, Oct. 21, 2015. 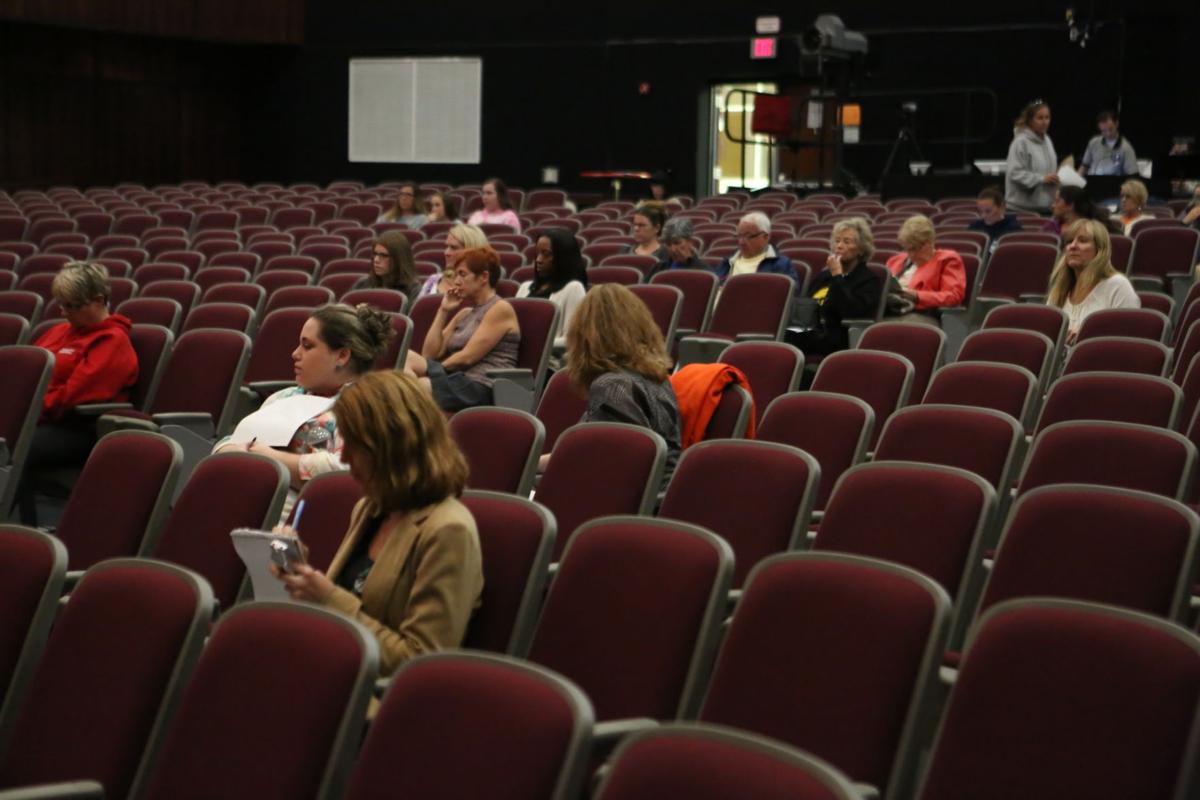 Members of the community attend the Ocean City Board of Education meeting Wednesday, Oct. 21, 2015, following the suicide of a second student in less than a year at Ocean City High School.

OCEAN CITY — This resort’s school district has a long tradition of success in sports and academics. But if things don’t change for the better soon, the district’s legacy will be one of suicide, community members told the Board of Education recently.

Twenty people in an audience of about 100 spoke before the board recently, most sharing emotionally charged stories of bullying, suicide attempts and what they called “the huge problem” of substance abuse in the district.

School board members heard them out.

Stopping bullying in schools not so simple

The exhibit in the lobby of the Performing Arts Center at Lower Cape May Regional High School is called the Forgiveness Project.

At the end of the 2.5-hour meeting, board member Jon Batastini told the audience “you’re just as guilty” for failing to report offenders.

“It’s time the community helps out,” board member Bill Holmes said. “It’s time we put our pride aside. Everyone needs to come together. Why we can’t baffles me.”

Former students Kelly Crowell, a 2010 graduate from Ocean City, and Ryan Couts, a 2011 graduate from Sicklerville, said they tried to commit suicide while they were attending the school. Suicide is second-leading cause of death among 15- to 24-year-olds, according to the federal Centers for Disease Control and Prevention.

Being openly gay, said 2010 graduate Rosemary Etling, of Marmora, meant being bullied day after day. “It got so bad,” she said, “I didn’t want to wake up.”

Ocean City self-reported 27 incidents of violence and 14 of bullying, the most in Cape May County, for 2014-15, according the New Jersey Department of Education’s annual report on violence, vandalism and substance abuse.

Middle Township, a district with 340 more students than Ocean City, self-reported the second most incidents, 25 and 10, respectively, for the same period.

In 2014-15, there were more than twice as many incidents of violence in Ocean City than 2013-14, when the district self-reported 12. Self-reported incidents of bullying increased by two from 2013-14 to 2014-15. Figures for prior years are not available online.

Substance abuse, often a way to self-medicate, and mental illness are two leading causes of suicide, said Sandra McGarvey, a therapist and administrator of Bridge Wellness Services in Ocean View, Dennis Township, a nonprofit sponsored by the Interfaith Counsel for Parish Support.

But bullying is not, said David Lester, a retired distinguished professor of psychology at Stockton University who is considered the dean of suicide studies. “A lot of kids get bullied, but suicide is still extremely rare in those who are bullied,” he wrote in an email.

As happened last year after the December suicide of senior Maliha Chowdhury, 17, of Ocean City, the suicide Oct. 16 of sophomore John Delgrande, 15, of Upper Township, prompted an outpouring of concern from a community that is reeling from its second student suicide in 10 months.

“We have failed as a community,” said Melissa Doyle-Waid, a parent and the pastor of Sea Isle City United Methodist Church. “We need to support one another and find a way to build our kids up and not tear them down.”

She was one of several speakers to advocate a holistic approach to healing the school, which added a student assistance coordinator and a social work/mental health counselor to its staff this year. The Sea Isle City Board of Education also is funding a social worker with trauma clinical experience to provide additional services to the district.

Everyone plays a role

“Suicide prevention is everybody’s business,” said Maureen Underwood, clinical director of the Society for the Prevention of Teen Suicide, located in Freehold. “By establishing that everyone has a role to play in suicide prevention, from teachers to clergy to local resources, a community can really build up a strong safety net for all students, not just those who are at risk for suicide.”

Underwood and the other experts quoted in this article did not attend the board meeting in Ocean City, but spoke on the topic of suicide in the days after.

Speaking up is something everyone can do, and is one of the biggest deterrents to harmful behavior, McGarvey said.

“We need to make it OK to talk about it,” she said of mental illness. “When kids try to hide it, that’s when it festers and can go to suicide. We need to invest in curriculum on mental health awareness and acceptance.”

“We need to talk openly about suicide, mental health and addiction,” said Carolyn Coburn, who founded Spread the Love Foundation after her youngest daughter, Sami, a 2013 Oakcrest High School graduate, died by suicide at age 19 in August 2014. “We just need to flush it out into the public.”

“These are difficult conversations to hold,” said Sara Martino, an associate professor of psychology at Stockton University and a clinician in private practice. “It’s not second nature for parents to talk to their kids about suicide. What happens when a parent asks the child if he feels like harming himself and he says ‘yes.’ What’s the next step?”

Education must extend beyond familiarizing parents and teachers with the warning signs of suicide. It must connect people with resources, something that could start with presentations in schools and visits from clinicians, Martino said.

But Coburn said required programs on gang violence and others that focus on less common causes of teen death — such as drunken driving and drug addiction — are dominating school agendas at the expense of desperately needed education on suicide prevention.

“It’s hard to fit more stuff in that isn’t mandated,” she said. “But this is a huge issue that has to get done.”

Ocean City will hold a presentation for parents at 6 p.m. Nov. 3 in the high school auditorium.

What: Ocean City presentation for parents

HAMILTON TOWNSHIP — Five children in the area have committed suicide since August 2014, including a township elementary school student and two…

OCEAN CITY — The family of John Delgrande, a sophomore at Ocean City High School, released a statement late Friday saying the teen died as a r…

A Mays Landing mother who lost her daughter to suicide last year is trying to change how schools help students cope with stress, depression an…

With the sun setting over Oakcrest High School on Monday night, students and community members milled somberly around the football field with …

OCEAN CITY — A downtown business is holding a fundraiser for a scholarship for an Ocean City High School student who died in December.

OCEAN CITY – A downtown business is hosting a fund-raiser for a scholarship for an Ocean City High School student who died last year.

Consequences of bullying / The hard battle

"Be kind, for everyone you meet is fighting a hard battle."

Kathleen W. Taylor, ED.D Superintendent of School speaks during Board of Education meeting about the suicide of a second student in less than a year at Ocean City High School, Wednesday, Oct. 21, 2015.

Members of the community attend the Ocean City Board of Education meeting Wednesday, Oct. 21, 2015, following the suicide of a second student in less than a year at Ocean City High School.