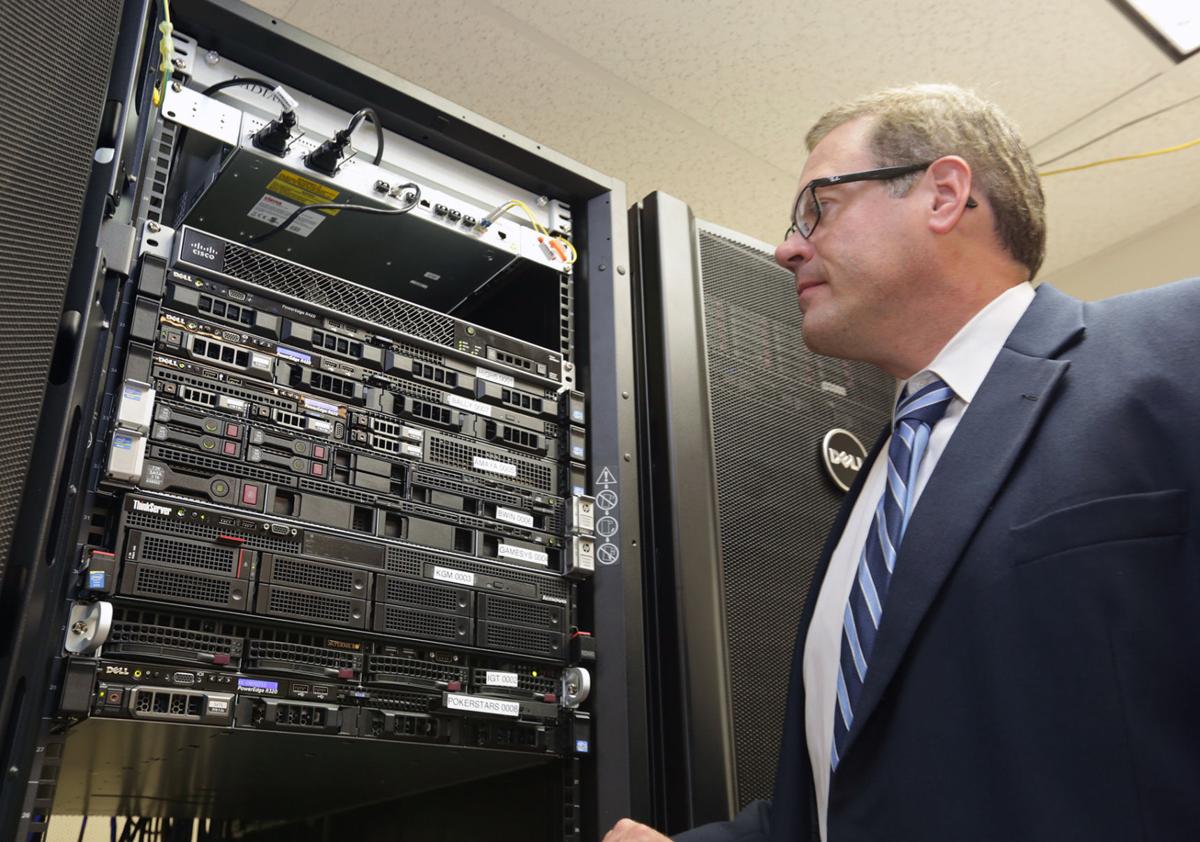 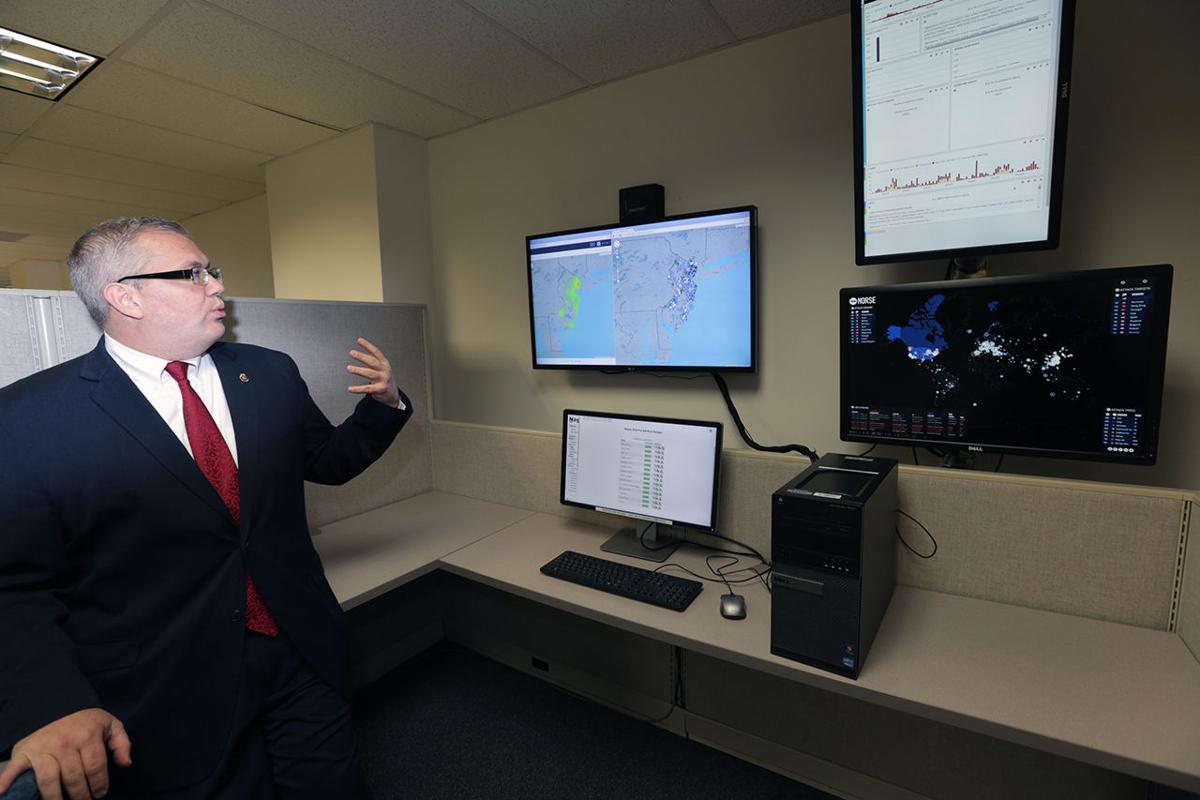 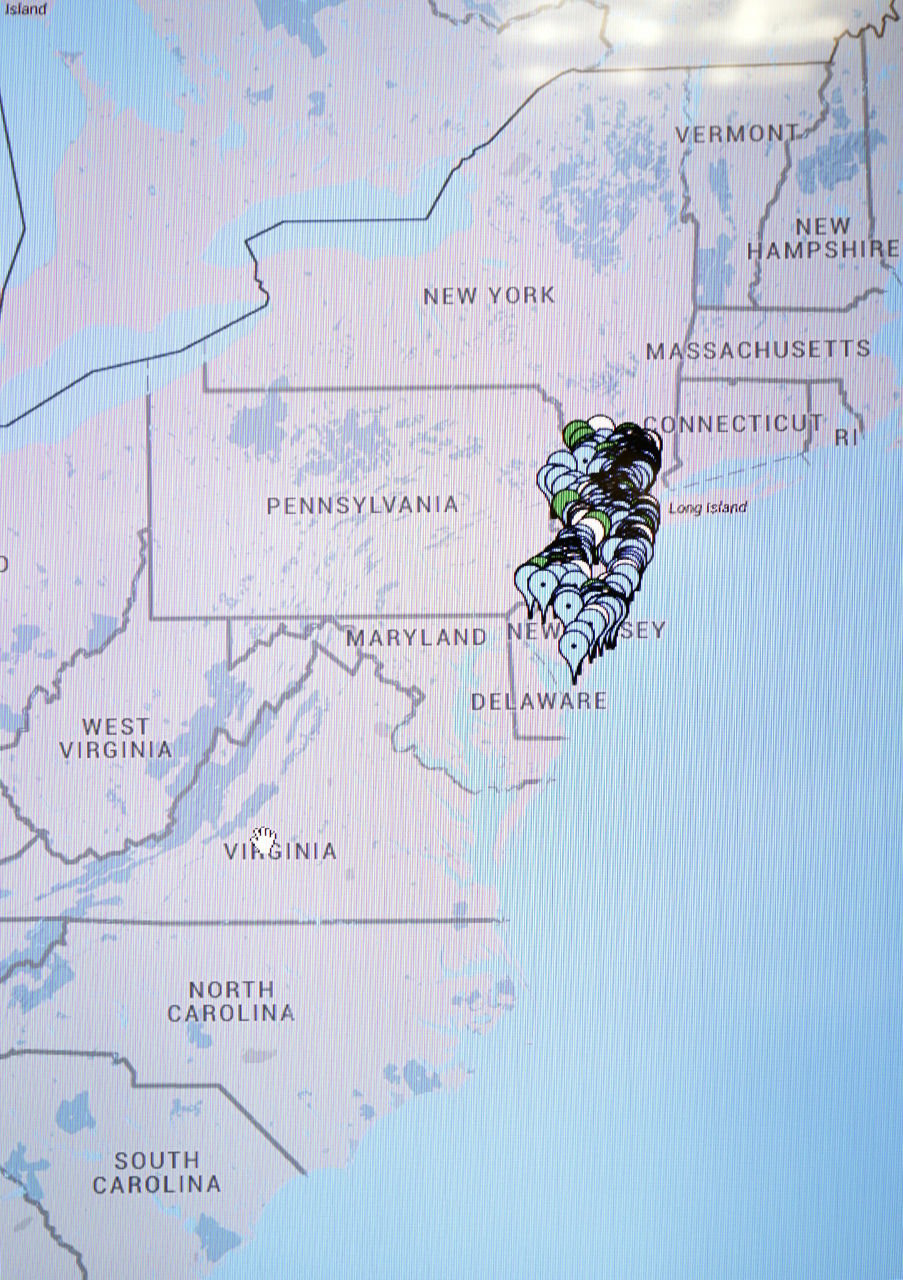 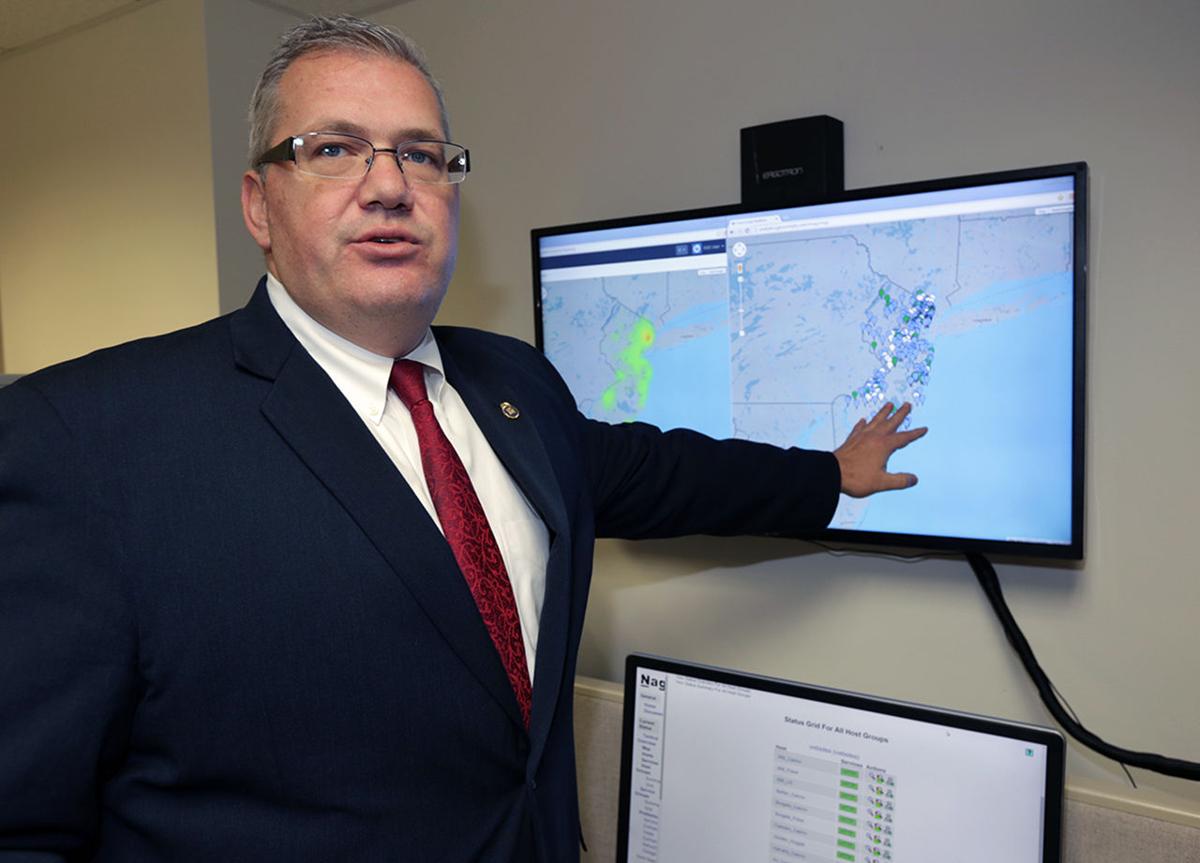 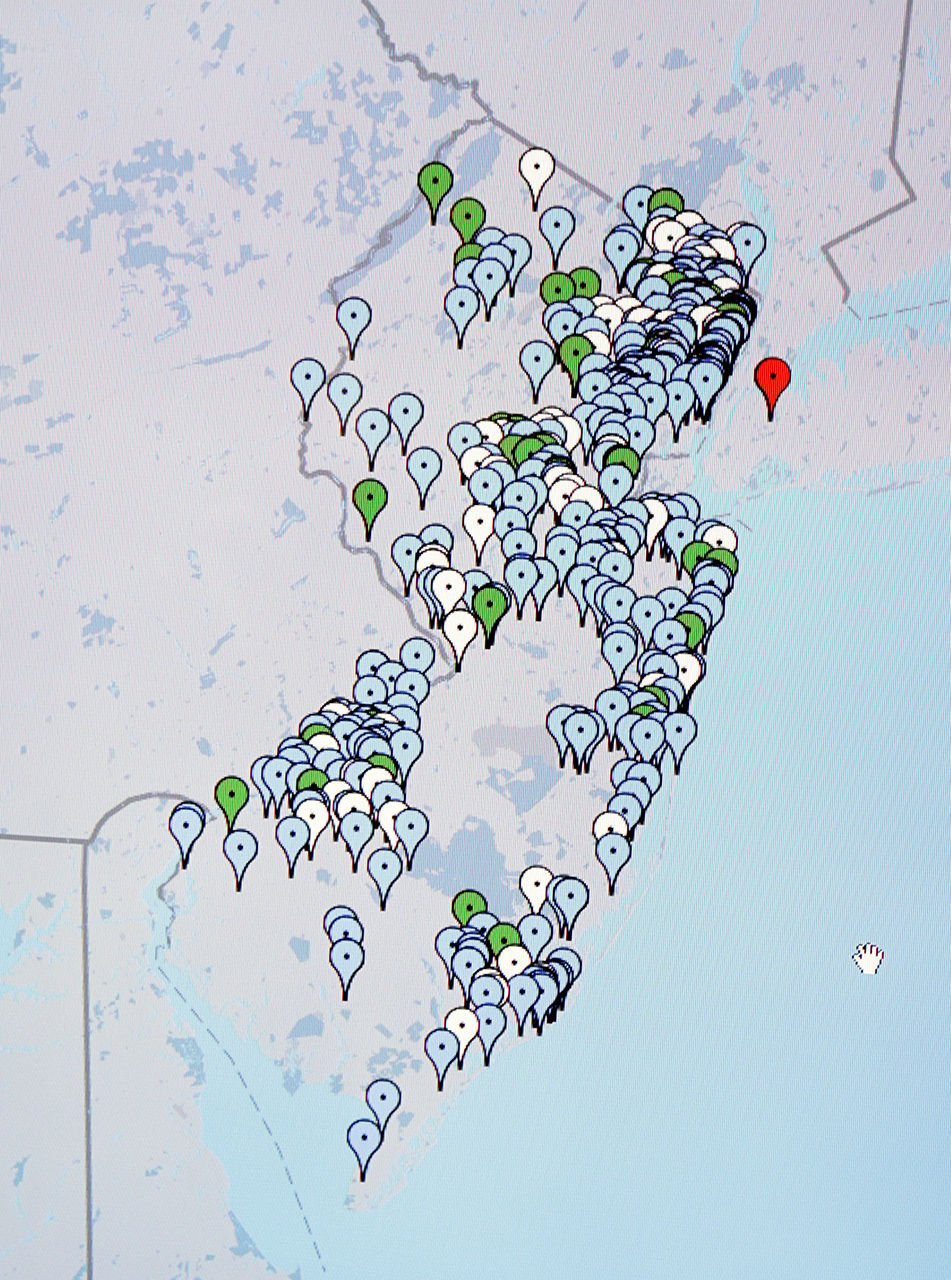 ATLANTIC CITY — A red dot briefly popped up on the computer screen, indicating that someone in Long Island, New York, was trying to illegally gamble online in New Jersey. A few minutes later, another red dot flashed in eastern Pennsylvania. It, too, vanished from the screen after just a few seconds.

“When we first went live, you saw red dots all over the country from people who were trying to beat us,” said Eric Weiss, chief of the technical services bureau for the New Jersey Division of Gaming Enforcement.

In the first year of Internet gambling in New Jersey, investigators and computer technicians at the division’s Atlantic City control center have been busy stopping illegal gamblers from — electronically speaking — sneaking across the border.

The regulatory agency has created a multilayered, high-tech security network to make sure computer users outside New Jersey don’t tap into casino websites or scam the system. Weiss pronounced it a success.

“I equate this to virus protection on your PC that prevents someone from getting in,” he said. “We’re constantly evaluating the process. For instance, if someone is able to defeat the system, how do we fix it? Fortunately, it hasn’t happened at this point.”

There were fears when New Jersey launched Internet gambling on Nov. 26, 2013, that computer hackers might compromise the websites offering casino-style slot machines and table games. However, Weiss said there have been no serious cheating scandals or security breaches.

“We had to figure out all of the ways it could be beaten or spoofed to make sure all of the gaming was done in New Jersey,” he said. “We never lowered our standards. What we’ve done is, we’ve gotten smarter. We continue to get better and smarter and do it in a way that makes sense.”

Using satellite-based geo-positioning technology, the division verifies the location of Internet gamblers across New Jersey on digital maps and computer screens. Geo-positioning is so precise that it can distinguish between gamblers who are on the very edges of New Jersey’s boundaries and those just across the border in another state.

Red dots appear on the computer map when someone is trying to play online from another state. Usually the red dots drop off the screen within a few seconds, indicating they have been blocked by New Jersey’s electronic barrier.

“We’re definitely confident that it isn’t happening,” Weiss said of the possibility of someone illegally gambling online.

New Jersey, Nevada and Delaware are currently the only states that have Web gambling. Internet gamblers don’t have to be New Jersey residents, but they must be physically located within the state to play on their personal computers, smartphones or electronic tablets. An airline traveler heading home to Florida could, for example, play online while waiting for a flight at Atlantic City International Airport.

Colored-coded graphics and maps at the Division of Gaming Enforcement’s control center pinpoint where individual gamblers are located and depict the devices they are using to access casino websites. Blue indicates PCs, white is for Apple-powered devices and green is for the Android operating systems.

Green shading on another computer screen reveals where clusters of online gamblers are concentrated. North Jersey is the most heavily crowded region, suggesting that many New Yorkers have been crossing state lines for Web betting. The South Jersey suburbs near Philadelphia are another Internet gambling hotspot, an indication that Pennsylvania gamblers are seeking action across the Delaware River. Atlantic City is another favorite haunt for online play.

Every day, would-be gamblers from other states, and even other countries, probe the security network to see whether they can illegally gain access to the websites.

“We have a lot in (Washington) D.C., a lot in Ohio and a lot in Nevada,” Weiss noted of the potential poachers.

As of Sept. 30, New Jersey had 456,502 Internet gambling accounts. Five of Atlantic City’s casino companies offer online gambling and have partnered with Web companies to extend their reach through the gambling cyberworld.

When Internet gambling was first introduced, there were complaints from some players that they were blocked from going online or were kicked off the websites even though they were in New Jersey.

“For the most part, we’re happy,” Lupo said. “We don’t see that as an impediment, nor have we seen that it has not worked and not been able to keep out those from outside the state of New Jersey.”

Borgata has been the top-grossing casino in the online business, hauling in $34.1 million in Internet revenue through the first nine months of 2014. Altogether, the casino industry has grossed $93.9 million from gambling websites, state figures show.

However, Internet gambling has fallen well short of its blockbuster predictions. Gov. Chris Christie initially forecast online gambling revenue of $1.2 billion per year. The current figures make it clear that 2014’s revenue will be nowhere near Christie’s numbers.

Weiss expressed confidence that online gambling will grow once potential customers overcome their initial reluctance to disclose personal information, such as their social security numbers, to establish Internet accounts. Another key is for banks and credit card companies to become more willing to process Internet gambling transactions, he said.

While no system can be completely foolproof, the division knows it can make Internet gambling more attractive to customers by aggressively protecting the integrity of the system. In addition to watching the Web players, the agency keeps an eye on the casinos and their online partners to maintain a strong regulatory structure, Weiss said.

The division has installed sophisticated software behind the firewalls of gambling websites to peer directly into the operating networks used by casinos and their vendors. No network changes can be made without the division’s permission, Weiss explained.

“I think we have developed even more sophisticated systems than some of the casinos,” he said.

Shawn McGraw, a systems administrator for the division, searches for anomalies in the gambling software that could tip him off to regulatory violations or if anyone “attacks” the servers used for betting websites.

“I can see every single thing on all of the servers we regulate — pretty much anything,” McGraw said.

Up to this point, the division has considered most of the violations to be minor and has handled them with warning letters, Weiss said.

“As regulators, we try to mitigate problems,” he said. “We want Internet gaming to succeed. We want the casinos to succeed.”

However, last month the division slapped a $10,000 fine on Caesars Interactive Entertainment, the online gambling arm of casino giant Caesars Entertainment Corp., for soliciting more than 250 compulsive gamblers who had voluntarily placed themselves on a list that bans them from Internet gambling. Calling it an inadvertent error, Caesars Interactive blamed the problem on a software glitch and said it has been fixed.

ATLANTIC CITY — Atlantic City casinos and their Web partners took in about $120 million in revenue during the first year of Internet gambling,…

ATLANTIC CITY — The online gaming arm of casino giant Caesars Entertainment Corp. has been fined $15,000 for allowing people who had voluntari…

More than a third of students in four Atlantic County middle schools or high schools have gambled in some way, and roughly one out of seven of…