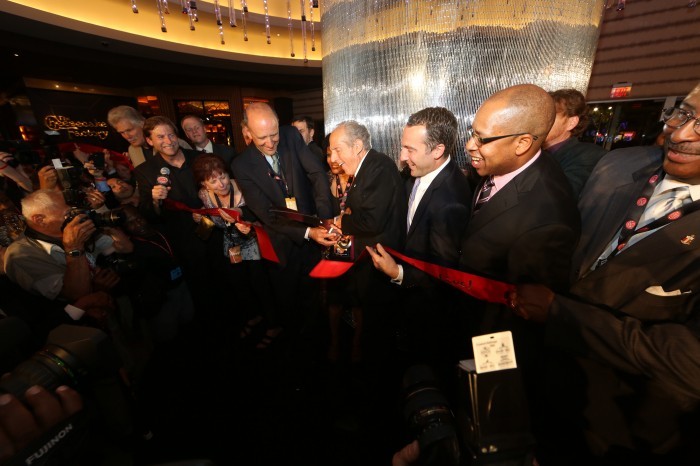 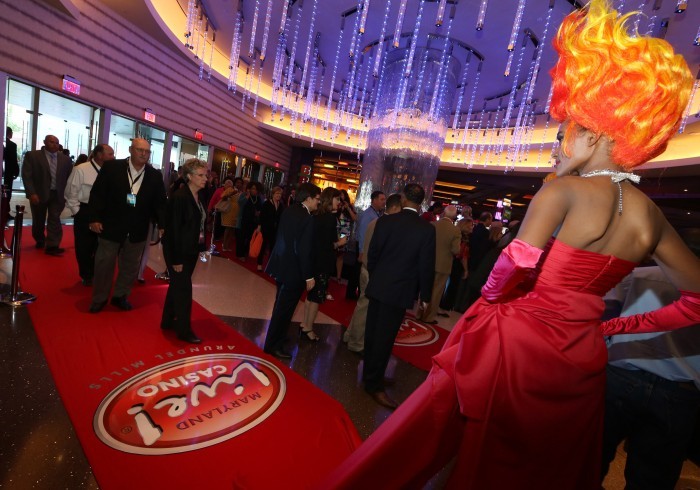 Guests are greeted by a moving wine bar and a red carpet at the 2012 opening of Maryland Live! in Arundel Mills, Hanover. 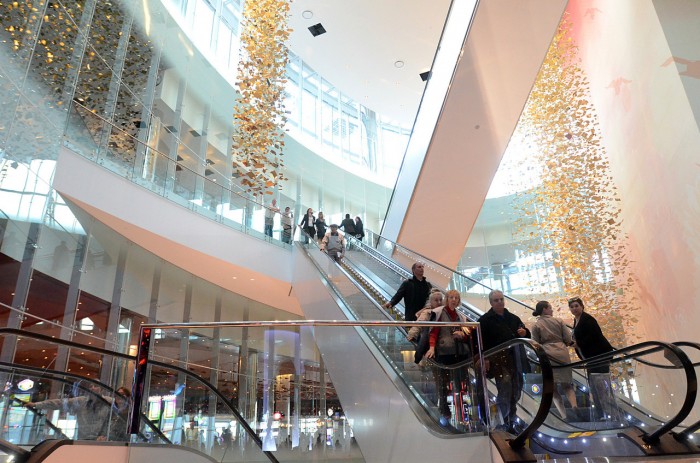 Guests ride the escalator at the Revel Casino-Hotel in Atlantic City.

Executives at the Maryland Live casino wielded sledgehammers to break through a wall in early July, ceremoniously marking the beginning of construction on a new poker room.

In Yonkers, N.Y., the Empire City Casino is hiring dozens of new employees to staff a $50 million expansion.

Philadelphia has Las Vegas gambling mogul Steve Wynn competing with other developers for the right to build the city’s second casino. Wynn, along with fellow Las Vegas heavyweights Caesars Entertainment and MGM Resorts International, also is eyeing Massachusetts in the sweepstakes to build the first casinos in the Bay State.

Meanwhile, New Jersey and Delaware are preparing to join Nevada later this year as the first states to offer Internet gambling.

Where does it all end? Maybe it doesn’t.

Despite an explosive growth in casino gambling throughout the Northeast — some say the market is already oversaturated — the expansion continues. Tempted by the jobs and tax revenue generated by the gambling industry, states are eager to cash in on casinos.

“I believe the level of competition will continue to escalate, because at this point, table games and slots are just like a commodity — like copper and aluminum,” said Clyde W. Barrow, director of the Center for Policy Analysis at the University of Massachusetts, Dartmouth.

When the Center for Policy Analysis began its study of the gambling industry in 2004, there were 24 Las Vegas-style casino resorts in only five states. Nearly half of those casinos were in Atlantic City. Now, the center monitors 61 gambling establishments, ranging from megaresorts to smaller racetrack casinos, in 14 states from Maryland to Ohio to Maine.

Barrow characterized most of the Mid-Atlantic casino market as being saturated, although he pointed to New York and Massachusetts as areas for growth. In his view, the fierce competition will lead to more casino bankruptcies. That, in turn, will give bargain hunters opportunities to buy casinos on the cheap, he said.

Barrow said the recession that began in December 2007 paradoxically was a time of great expansion for the Northeast casino industry. He noted that the number of casinos has more than doubled in the past six years. Existing casinos added to the growth by building new amenities to fight the competition.

In the race for even more casinos, Barrow suggested states will face a dilemma: Should they settle for modest gambling venues or demand full-fledged casino resorts?

“What do you build, a Focus or a Lexus?” Barrow asked.

Atlantic City enjoyed an East Coast casino monopoly from 1978 to 1992. Now, the seaside city has suffered the most from the proliferation of gambling. Nationwide, Atlantic City was the poorest-performing casino market last year, down 8 percent overall, to $3.05 billion in total gambling revenue. Moreover, Atlantic City gambling revenue has plummeted more than 40 percent since peaking at $5.2 billion in 2006, the year rival casinos began opening across the border in Pennsylvania.

Pennsylvania’s gambling strategy has been to spread casinos across the state instead of concentrating them in one market, as New Jersey has done with Atlantic City. One analyst said other states are copying Pennsylvania’s model as the competition becomes even more intense.

“Most of the states are taking a page out of Pennsylvania’s playbook and are trying to keep gaming revenue inside their state instead of watching their citizens go outside the state to gamble,” said Cory Morowitz, chairman of New Jersey-based Morowitz Gaming Advisors.

Even Pennsylvania, a relative newcomer to casino gambling, is feeling the effects of competition. New casinos in Ohio and Maryland have curbed Pennsylvania’s once-booming market. Total revenue generated by slot machines and table games at Pennsylvania’s 11 casinos was flat for the fiscal year ending June 30. It came in at $3.14 billion, up less than one-tenth of a percent from the previous year.

In addition to dealing with out-of-state rivals, the existing Pennsylvania casinos will compete with a second casino coming to Philadelphia. Wynn has proposed a $900 million casino hotel on the Delaware River waterfront, but he must beat out five other would-be developers for the Philadelphia license. At the same time, Wynn wants to build a $1.2 billion casino in Massachusetts, where plans have been approved for three resort-style casinos.

Since 2010, Maryland has opened four casinos. Maryland Live, near Baltimore, claims to be the top-grossing casino in the Mid-Atlantic region, pulling in more than $55 million in total gambling revenue in June. All of that revenue has encouraged the casino to expand. Using sledgehammers, Maryland Live officials pounded through a wall July 11 for construction of a 52-table poker room opening next month.

More Maryland casinos are coming. Caesars Entertainment, owner of four Atlantic City casinos, is building a Baltimore casino scheduled to open next year. An additional Maryland casino has been approved outside Washington, D.C.

New York, currently limited to Indian-owned casinos and racetrack slot parlors, has authorized a statewide referendum for as many as four new resort-style commercial casinos.

Morowitz also believes the Northeast gambling market is on the verge of becoming oversaturated. The addition of resort-style casinos in Massachusetts and New York, expected to happen in the next few years, will be the tipping point, he predicted.

“When New York and Massachusetts come online, that will bring us to the term ‘hypercompetitive conditions,’” Morowitz said. “All of this additional gaming capacity is getting to the point where supply is outstripping demand. We’re getting to that.”

Tony Rodio, president and CEO of Tropicana Casino and Resort in Atlantic City, focused on the rapid growth of casino gambling during a presentation in May at the East Coast Gaming Congress. To illustrate his point, Rodio used a series of slides showing how Atlantic City has literally become surrounded by competitors in recent years.

Rodio, however, argued that Atlantic City’s resort-style casinos have far more to offer than what he called the “Walmarts with slot machines” in neighboring states. He predicted that the slumping Atlantic City market is on the brink of a comeback, mostly because he believes other casinos in the Northeast simply don’t have the attractions to compete with the resort town.

With its monopoly on East Coast gambling long gone, Atlantic City is trying to reinvent itself as a more diverse tourist town by building upscale retail shops, restaurants, nightclubs and spas.

Jeffrey Hartmann, interim CEO of Revel Casino-Hotel in Atlantic City, joined Rodio in arguing that the resort has been able to distinguish itself from its competitors.

“Atlantic City has so much to offer to the regional gamer,” Hartmann said. “Atlantic City will always have top-of-the-line awareness to gamers in the Northeast.”

Revel, a $2.4 billion megaresort, has struggled since opening in April 2012. It began by touting itself as a high-end resort, but that strategy was blamed for scaring off hardcore gamblers. Since emerging from Chapter 11 bankruptcy protection in May, Revel has rebranded itself as a casino-centric property. Its new marketing campaign features the theme “Gamblers Wanted.”

Hartmann speculated that Atlantic City’s 12 casinos will have to wait a while longer before the market stabilizes. Overall, virtually the entire Northeast is having difficulty absorbing the new casino capacity added in the past five years, he said.

State governments have been a driving force for casino expansion. In New England, for instance, the prospect of new casinos in Massachusetts may put pressure on the state governments in New Hampshire and Maine to begin or expand casino gambling, Hartmann said.

“Really, governmental policy will determine if and when capacity is added,” he said.

Established gambling markets such as Atlantic City, Delaware and Connecticut seem the most vulnerable to the big buildup. Connecticut’s Indian-owned Mohegan Sun and Foxwoods casinos have been struggling with declining revenue amid heightened competition from New York City’s huge Resorts World slots parlor.

Competition from Pennsylvania’s casinos began driving down Delaware’s gambling revenue in 2007, said Ed Sutor, CEO of Dover Downs Hotel & Casino, one of three racetrack casinos in Delaware. The advent of casino gambling in Maryland has been another huge setback for Delaware, he said.

So far in 2013, revenue from Delaware’s slot machines has dropped by double-digit margins in each month compared to last year. Through June, slots revenue is down a combined 16 percent.

A new Delaware gambling commission will study ways to help the state’s casinos survive. Sutor argued the best hope for Delaware’s casinos is to get a bigger share of the revenue stream. Currently, the state’s cut for slot revenue is 43.5 percent. Eleven percent goes to support Delaware’s horseracing purses, and an additional 8 percent is given to casino vendors, he said.

In the meantime, Delaware is bracing for the two new Maryland casinos in Baltimore and near Washington, D.C. Sutor said 70 percent of Delaware’s casino business comes from out-of-state visitors, including 40 percent from Maryland. He said Delaware is threatened by Maryland’s new “category killer” casinos.

“We in Delaware have been saying the market is saturated already,” Sutor said. “There are only so many gamblers in the region. I think states ... that are adding more casinos don’t increase the pie. It just cuts it into smaller pieces.”

Guests are greeted by a moving wine bar and a red carpet at the 2012 opening of Maryland Live! in Arundel Mills, Hanover.

Guests ride the escalator at the Revel Casino-Hotel in Atlantic City.