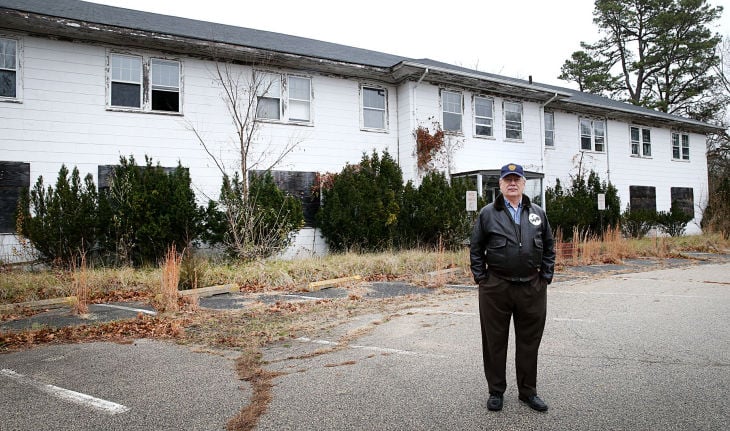 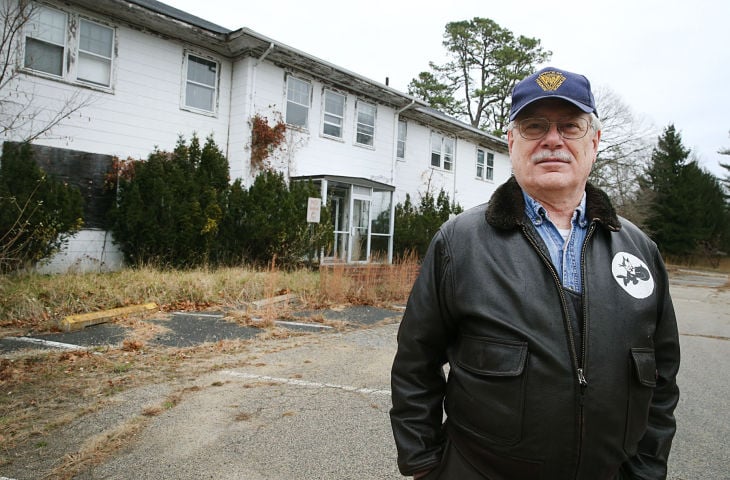 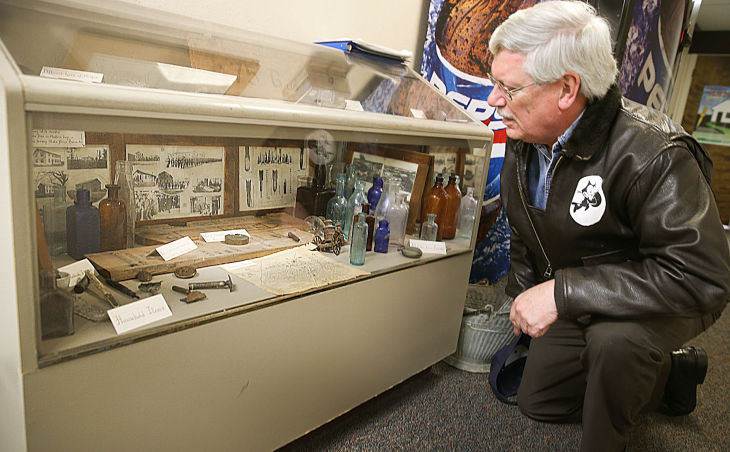 Mark Maxwell of Mullica, president of the Egg Harbor City Historical Society, looks at artifacts from the Amatol site now in a case at Mullica City Hall. Tuesday November 26 2013 Administration Building at Amatol, the last remaining building of the WWI munitions plant in Mullica Township. (The Press of Atlantic City / Ben Fogletto) 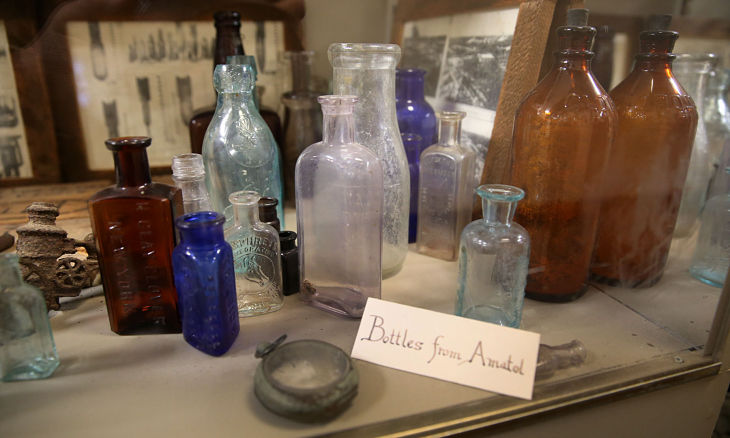 Artifacts from the Amatol site now in a case at Mullica City Hall. Tuesday November 26 2013 Administration Building at Amatol, the last remaining building of the WWI munitions plant in Mullica Township. (The Press of Atlantic City / Ben Fogletto) 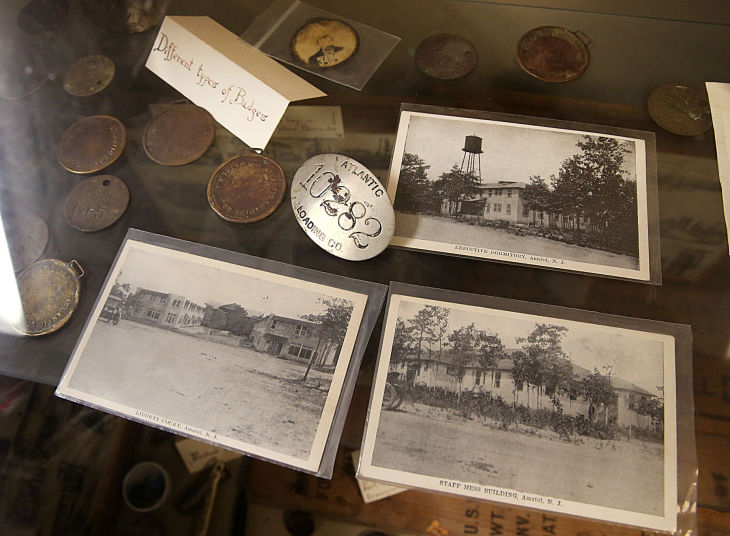 Artifacts and photographs from the Amatol site now in a case at Mullica City Hall. Tuesday November 26 2013 Administration Building at Amatol, the last remaining building of the WWI munitions plant in Mullica Township. (The Press of Atlantic City / Ben Fogletto) 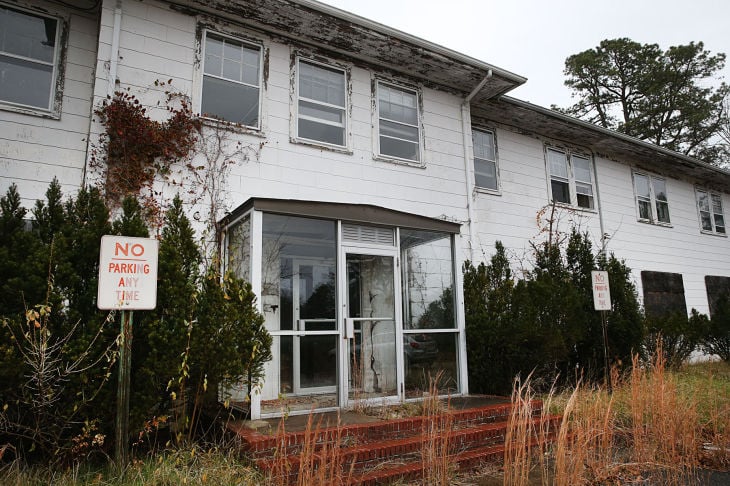 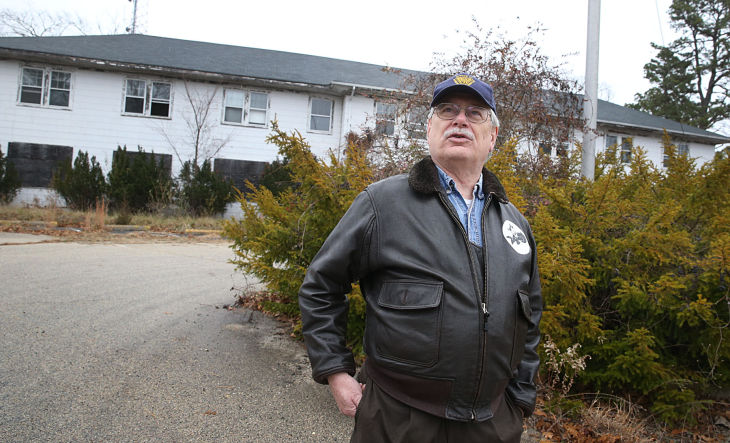 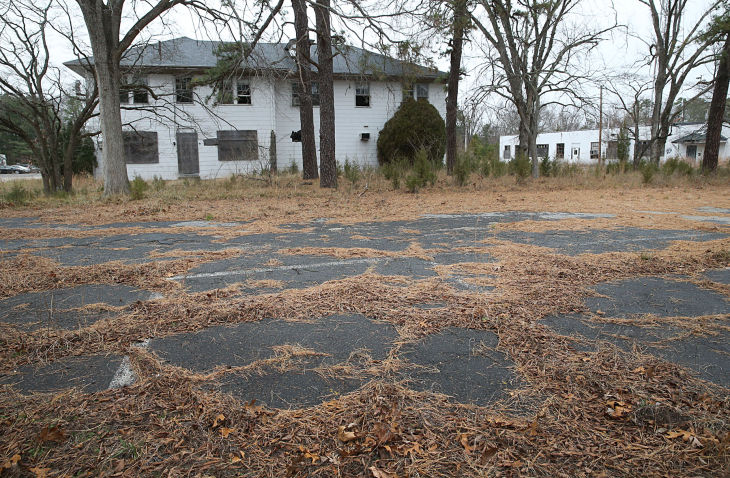 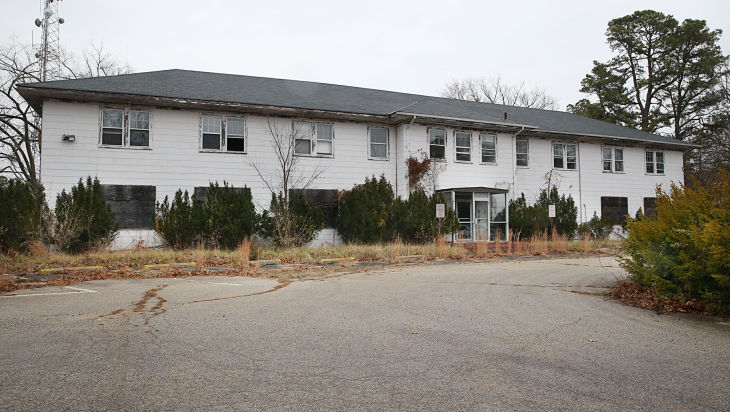 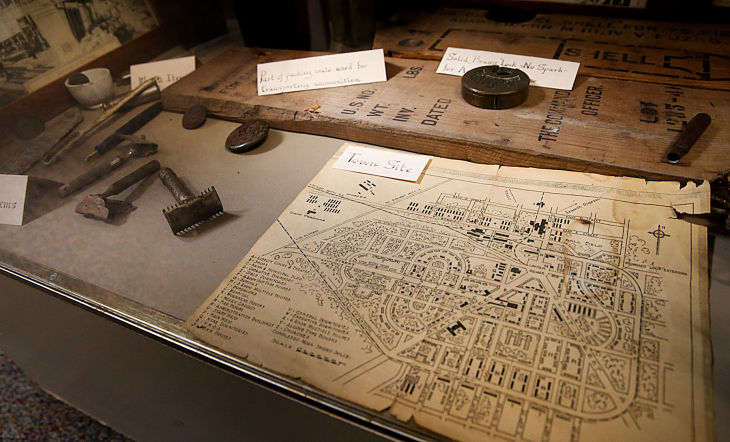 Artifacts and a map from the Amatol site now in a case at Mullica City Hall. Tuesday November 26 2013 Administration Building at Amatol, the last remaining building of the WWI munitions plant in Mullica Township. (The Press of Atlantic City / Ben Fogletto)

MULLICA TOWNSHIP — Amatol existed for a matter of months nearly a century ago, but its vegetation-shrouded ruins still beguile residents in this Pinelands outpost.

When operations began in July 1918, the patchwork of munitions factories and residential streets represented a colossal achievement of urban planning. The isolated community swelled with workers who inhabited a new downtown with such amenities as a cafeteria, dance hall and movie theater.

“The history of the work is a story of the accomplishment of brain power, engineering talent and the genius of American business organization,” wrote the secretary of the Public Service Commission in January 1919.

But by the time those words were printed, in a U.S. Army publication, Amatol’s future was fading.

World War I ended on Nov. 11, 1918 — Armistice Day, later commemorated as Veterans Day — and the 6,000-acre facility was soon shuttered, its buildings dismantled as swiftly as they’d been built. What little remained fell to ruin or was scrapped.

Locals such as Louisa Mazetis joke that nearby homes featured plumbing and wiring ripped from Amatol by shady contractors. Many of Amatol’s laborers, predominantly Irish and Polish from Philadelphia, stayed in the area and started families.

“This is the story of our community,” said Mazetis, the 88-year-old who’s helping an effort to tell that story in a museum. “Our claim to fame is Amatol, the ammunition city.”

For several years, a group of committed historians have pushed to preserve that legacy at a museum. The group, unofficially led by Township Committeeman Anthony Gabris, is close to signing a lease on the historic two-room Hilda Frame School in the Nesco section.

“We’re a historical society without a home,” Gabris said. “We keep our papers in various bedrooms and in cardboard boxes.”

The 1900 school operated as a preschool until school board officials voted to close it in 2009. If the plan is finalized, artifacts from Amatol and other local landmarks such as the Atlantic City Speedway — a 1.5-mile track built on the Amatol site in 1926 — would finally have a home.

Time, of course, has taken its toll on Amatol.

Contracted by the federal government amid a world war the allies feared losing, it was built almost simultaneously with the better-known Bethlehem Loading Co. — or Belcoville — a munitions factory whose ruins are now part of the Atlantic County Park in Estell Manor.

The Atlantic Loading Co. transformed a swath of the Pinelands into a grid of streets. Its name came from the type of explosive used in munitions.

Mullica Township was chosen for its proximity to the rail line that ran from Philadelphia to Atlantic City and its relative isolation. At the time, the area was sparsely populated, an advantage in the event of an explosion at the plant. According to historical records, the workers’ city was sited two miles away from the factory in case of an explosion.

“Almost nothing’s left,” said Robert Benner, a 60-year-old resident who’s researched Amatol. “One of my neighbors found part of the dump and dug up a lot of bottles, but it’s hard to find in the woods.”

More than a decade ago, the library clerk at Atlantic Cape Community College built a website documenting Amatol’s history. Benner’s step-grandfather worked at Amatol and, when it closed, he operated one of the bulldozers that knocked it down.

Only two buildings from Amatol are still standing: the administration building became the now-abandoned State Police barracks outside Hammonton, and one of the houses was moved to the White Horse Pike, where it’s still occupied.

Interestingly, many of Amatol’s buildings were designed to be temporary. The privately owned forest land behind the township’s recreational fields are strewn with bits of brick, concrete and terra cotta — the materials used to construct these temporary structures.

“That’s the cheap lath they made to separate the rooms,” Benner said. “It was plaster over wire mesh. When they disintegrated, (the plaster) fell out of the wire mesh.”

There’s also a number of holes in the ground, where sewer mains have collapsed underneath what was once a sprawling factory town. Mark Maxwell, a 67-year-old historian from neighboring Egg Harbor City, used to explore these woods with friends as a kid, long before he knew of Amatol.

“That’s what you did,” he said. “You got on your bike and go someplace.”

Maxwell found railroad spikes and metal caps from the cardboard containers that contained ammunition. Years later, he also found disintegrating asbestos — dirt bikers along the trails would kick up white dust — which the local authorities since covered with dirt.

The Atlantic County Utilities Authority considered building a landfill on the Amatol site in the mid-1980s, but the proposal ultimately died in part because of potential environmental impacts and an organized opposition by township residents.

In his research, Maxwell has uncovered a lot of interesting stories about Amatol that have survived the years. In one report, a cavalry group stationed at Amatol would come into Egg Harbor City, “raising a ruckus.”

“The sheriff put them in jail,” the story goes. “They had so many people in jail, they had enough they could lift the roof off the top.”

The next morning, the sheriff discovered the jail empty, but its doors still locked.

Amatol’s ruins haven’t changed much since he was a kid, Maxwell said. It’s still a magnet for explorers, although he doesn’t recommend trying to explore the abandoned sewers.

“There are quite a few lines you can get into, but I wouldn’t advise it,” he said. “You never know what nasty, four-legged creatures might be occupying it on the other end.”

While little remains of Amatol’s buildings, countless artifacts — from photographs to rusting equipment — are locked away in attics and garages across the township.

Mazetis became interested when she helped a niece research Amatol for a high school report in the 1960s. When she went to college, in her 70s, she wrote a term paper about Amatol. She’s also lobbied to preserve what’s left of the complex.

“We’re trying to collect whatever we can from Amatol to put in this museum we hope to have operating within a year,” she said.

Gabris said the plan is to lease the Frame School to the society for $1 a year. Utility costs of about $3,000 per year will be raised by the group, he said.

It’s taken several years to get to this point, but Gabris said the project is the closest its been to fruition. The Township Committee discussed the specifics of the lease earlier this month.

While the area has a lot of history, a lot of the museum will be dedicated to Amatol because of its huge impact on the township.

“We’ve discussed various things, but Amatol always floats to the top,” he said. “Amatol is a story in itself.”

Mark Maxwell of Mullica, president of the Egg Harbor City Historical Society, looks at artifacts from the Amatol site now in a case at Mullica City Hall. Tuesday November 26 2013 Administration Building at Amatol, the last remaining building of the WWI munitions plant in Mullica Township. (The Press of Atlantic City / Ben Fogletto)

Artifacts from the Amatol site now in a case at Mullica City Hall. Tuesday November 26 2013 Administration Building at Amatol, the last remaining building of the WWI munitions plant in Mullica Township. (The Press of Atlantic City / Ben Fogletto)

Artifacts and photographs from the Amatol site now in a case at Mullica City Hall. Tuesday November 26 2013 Administration Building at Amatol, the last remaining building of the WWI munitions plant in Mullica Township. (The Press of Atlantic City / Ben Fogletto)

Artifacts and a map from the Amatol site now in a case at Mullica City Hall. Tuesday November 26 2013 Administration Building at Amatol, the last remaining building of the WWI munitions plant in Mullica Township. (The Press of Atlantic City / Ben Fogletto)