ATLANTIC CITY — Inside an unfinished Revel Casino Hotel in 2011, Gov. Chris Christie declared the arrival of a “new Atlantic City” when he gave control of half of it to a state agency that for decades was tasked with funding its redevelopment.

When Christie signed a law that put the Casino Reinvestment Development Authority in charge of the Tourism District, a state-run area around Atlantic City’s attractions, it reflected the latest priority shift for the authority, which was created in 1984 to use casino investment taxes for urban revitalization.

Within a year, CRDA was spending tens of millions of dollars — not on rebuilding neighborhoods but on attractions at the casinos.

The resolutions show clear shifts in priorities. One obvious example: Once envisioned as a unique tool of urban revitalization, the authority directed about half of the money toward the resort’s casinos and attractions.

That includes $456.7 million on noncasino projects like The Walk, Boardwalk Hall and the Convention Center. In addition, nearly $452 million — about a quarter of what CRDA invested in the city — went toward the casinos for projects like Harrah’s Waterfront Conference Center, The Pier Shops at Caesars (now The Playground), Resorts’ Margaritaville and several casino hotel expansions.

The authority invested $374 million, about 20 percent of the money spent in the city, on infrastructure, including $120 million for the controversial Brigantine Connector Tunnel.

The rest, $217 million, or about 12 percent, went toward community development projects such as parks, day care centers, the city’s hospital and a soon-to-be built Stockton University campus. 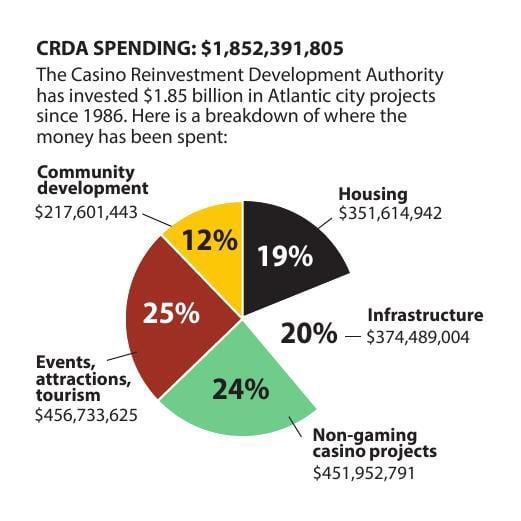 The spending choices of CRDA, as seen through a resolution-by-resolution review, reveal a tug-of-war over where the money would best be spent.

But in the end, those who oversaw the agency’s endowments say CRDA worked as well as one could expect.

“Given the legislative challenges, the inherent conflicts as to whose money it was — the casinos’ money or the community’s money — it worked better than you could reasonably expect it to work,” said former CRDA Executive Director James Kennedy. “But you always have limits to what you could do due to those inherent conflicts.”

In its early years, CRDA invested almost exclusively in housing, most notably in the Northeast Inlet. CRDA authorized $171 million for developments like The Cove from 1986 to 1991, CRDA documents show.

The projects razed blighted buildings and relocated residents in rebuilding much of the area near Gardner’s Basin. Once described as slums, the attractive neighborhoods were hailed as an example of the city’s rebirth in the casino era.

“It worked really well. They were bringing in working-class people back to the neighborhood,” said Mayor Don Guardian, who lives in one of those CRDA-funded homes.

In 1991, then-Mayor Jim Whelan called for CRDA to shift its focus away from housing construction and toward economic development. Whelan wanted increased investments in the Convention Center and attached hotel, a minor-league baseball stadium and road improvements to beautify the city’s major entryways, all of which came to fruition.

In 1993, citing a need for more hotel rooms in the city, state lawmakers allowed the authority to tweak its mission. For the first time, it let casinos satisfy part of their obligation to invest in public projects by building 200 or more hotel rooms at their own properties.

In the early 2000s, CRDA created the Corridor project, later dubbed The Walk, a shopping and entertainment district that spans three city blocks. It also included a revamped entranceway into the resort.

Whelan, now a state senator who still lives in Atlantic City, said the shift was necessary.

“The underlying point I think was that community development has to go along with economic growth,” Whelan said. “Clearly at that time, the economic growth in the community was going to come from hotel rooms and noncasino attractions.”

Over time, more CRDA money funneled to the casinos for nongaming projects. CRDA committed $23 million for The Quarter at Tropicana in 2001, $33 million for The Pier Shops at Caesars in 2002 and $17 million for a hotel expansion at Borgata Hotel Casino & Spa in 2005.

Assemblyman Chris Brown, R-Atlantic, said CRDA money “fell back into the hands of casino executives due to a lack of leadership and vision for the entire resort.”

Even Donald Trump, himself a beneficiary of CRDA money, criticized the investments — when they stood to hurt his casinos’ interests. He called the Brigantine Connector tunnel a publicly financed “driveway” to his would-be competitor’s doorstep in the Marina District.

CRDA still spent money on community projects over the years. Nearly half of the resolutions — 206 — pertained to community development, albeit much smaller investments.

Among the largest were $17 million for the Stockton campus in 2016, $11 million for the Civil Rights Garden and neighboring Carnegie Library in 1995, $8.5 million for the Renaissance Park shopping plaza in 1993 and $5 million for the All Wars Memorial building in 2005. CRDA committed $4.1 million to the Mayor James Usry Child Care Center over several resolutions starting in 1999.

“I think CRDA has done some great projects in Atlantic City,” said Atlantic County Freeholder Ernest Coursey, a former city councilman. “You’ll always get those of us in the communities that will say, ‘They could have done more.’ And in some instances they’re correct. But I think we have to be grateful and thankful for the projects they were able to complete in Atlantic City.”

Christie’s creation of the Tourism District made the CRDA mission come full circle. Since 2012, the authority initially charged with using casino taxes to revive the city has spent frequently and heavily on nongaming attractions at the casinos to diversify the city’s economy.

CRDA approved $46 million for Harrah’s Waterfront Conference Center in 2012, $18 million for Tropicana Boardwalk and retail amenities in 2014 and $15 million for a Borgata nightclub expansion in 2015. The Borgata project included an outdoor stage the casino scrapped a year later and replaced with a beer garden.

The gambling economy, he noted, had been cut in half. No other private developers were coming to CRDA with projects, he said.

“And we were at a point in the city’s history when we really had to consider what else we might be able to do to create the kinds of Las Vegas-model initiatives,” he said. “So we decided to begin to fund those qualified projects.”

In a statement, the Casino Association of New Jersey said the casinos are still among the largest economic engines for the state and provide economic benefits for the city, region and state.

“By funding projects that sustain the overall success of the casino and tourism industry, the CRDA is supporting city residents, hardworking families and other city businesses that rely on the casinos for their economic livelihood,” the association statement said.

And Palmieri pointed out that IATs still paid for public projects such as the paving of Pacific Avenue, the once pothole-ridden thoroughfare that drew the ire of residents and tourists alike.

The authority spent $6.3 million on that project. But it was plagued by repeated delays and became another symbol of the city’s struggles, the apparent inability to perform a basic service like pave a street.

CRDA had rejected all of the initial bids it received, saying they didn’t meet its specifications. New contracts were finalized by the spring of 2014.

Work began that June but was interrupted multiple times by weather and major events. That pushed the street’s milling and paving into December 2014, when low temperatures tabled construction until spring 2015.

When the project was at last complete, CRDA held a ribbon-cutting. Guardian arrived on a jitney as Palmieri hung out the door. The mayor then skateboarded down the newly smooth street.

They finally paved the road. The authority kept its promise. And the city celebrated.

When an anchor store leaves South Jersey, what's next?

The Pleasantville Center on the Black Horse Pike, anchored by Kmart and the Asia Supermarket, is bustling daily. But with the loss of Kmart, M…

ATLANTIC CITY — An art attraction got some positive publicity last week — for another city.

ATLANTIC CITY — Meet AC, the resort’s convention and visitors’ bureau, will have to do more with less this year.

ATLANTIC CITY — A bill intended to spur economic development in the city’s neighborhoods cleared a state Assembly panel this week.

Yogi Berra immortalized the phrase “it ain’t over till it’s over,” but it was an Atlantic City casino reinvestment fund that helped immortaliz…

Our view: CRDA needs transparency, public input more than before

As the Casino Reinvestment Development Authority transitions to its new less-funded status, one of its lavish failures is being repurposed to …

As the Casino Reinvestment Development Authority transitions to its new less-funded status, one of its lavish failures is being repurposed to …

Public Eye has an update to a story we’ve been following since last year.

The Casino Reinvestment Development Authority was sharply criticized in a state audit for its fiscal management, which exposed deficient proce…

ATLANTIC CITY — With little fanfare, Chris Howard took over leadership of the Casino Reinvestment Development Authority as it reassesses its mission.

ATLANTIC CITY — The first time Mark Callazzo walked into the Parkside, a five-story apartment building at the odd-shaped intersection of Bosto…

With every New Year comes a clean slate and a fresh perspective. Shake off those 2016 blues with our round-up of things to look forward to in 2017.

As John Palmieri exits CRDA, he reflects on his time in charge

GALLERY: EHT, Galloway and other potholes to avoid

It's pothole season and there are plenty of hazards out there on the road. If we're missing one, send us a photo with it's you're at newstips@…