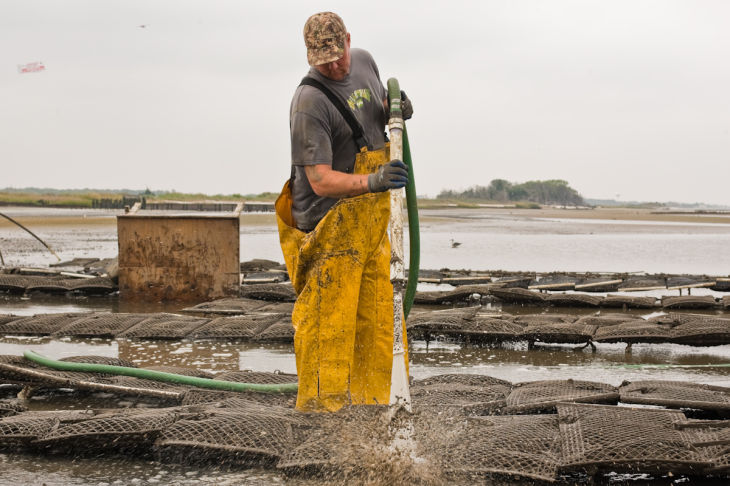 Chris Knorpt, of Erma, sprays down the bags containing the oysters to remove any mud and sediment that can hinder the flow of water through the bags, at the Rutgers University Cape Shore Facility. 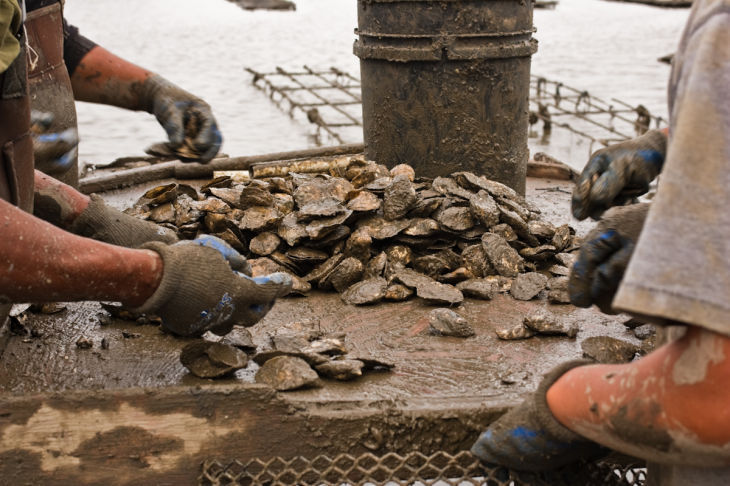 Workers sort the oysters by hand, with dead oysters being discarded, market size oysters being transferred to another location, and smaller oysters being put back into bags to continue growing at the Rutgers University Cape Shore Facility. 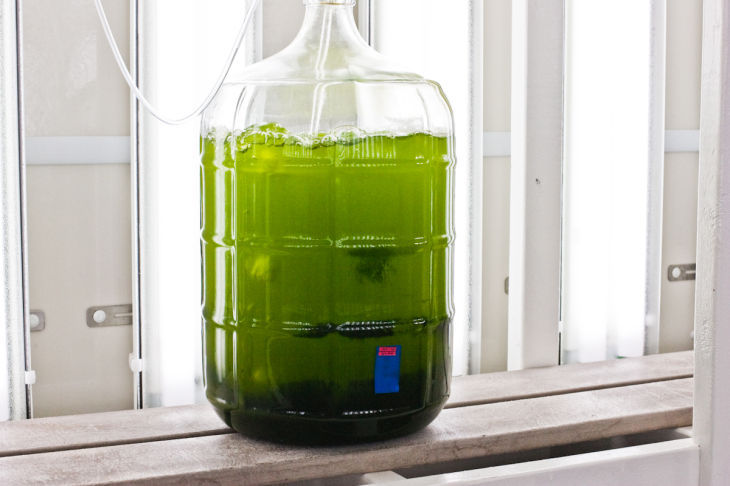 Algae is grown to be used as food for the larvae oyster seed at the aquaculture facility in Lower Township, just off of the canal.

It quickly became the perfect 3-inch restaurant oyster and, before long, Cohen's succulent bivalves were being sold in Boston, Baltimore and New York. They have even made their way to restaurants in Las Vegas and Texas.

Today, Cohen has 30 workers. He expects to sell 2.5 million oysters at 60 cents each, wholesale, this year. Six other companies, five in the past year, have opened up businesses next to his, marketing their own oysters by such names as Salty Lady and Cape Shore Salts.

That isn't what caught the attention of the Lower Township Economic Development Advisory Committee, however. The group, charged with creating year-round jobs in an economically challenged township that suffers from a chronically high unemployment rate, was interested in what Cohen said the business could become.

"Dan Cohen said we have the capacity to do 10 times more. That could be 300 jobs. That was music to our ears," said Deputy Mayor Norris Clark, who chairs the committee.

Creation of 300 year-round jobs may be just the beginning as the committee looks not only into new businesses but expanding old ones. Oysters have been harvested locally since the 1730s, but is the industry being fully utilized?

Curtis Bashaw, a committee member and hotelier who sells Cape May Salts in three of his restaurants, sees the oysters becoming a tourist attraction. Bashaw said tourists go to the beach in the summer, but during the rest of the year they welcome other things to do, such as visiting wineries and museums. Bashaw envisions a "farm-to-table tour" for the growing oyster industry.

Such a tour would start at Rutgers University's Aquaculture Innovation Center in North Cape May, which last year grew 10 million seed oysters for the industry, and would end at an area oyster bar. In between they would visit Cohen's facility on Ocean Drive, where a paddlewheel system runs water past the oysters as they grow from 3 millimeters to 1½ inches. Then they go to the tidal flats to double in size before being sold.

The idea may even include the industry building its own hatchery. David Jones, a shellfish technician for Rutgers, said the facility on the banks of the Cape May Canal was opened as a business incubator and training center with an educational component for aquaculture students. The facility grows oysters only because private enterprise hasn't taken the leap. The facility also produces horseshoe crabs, hard clams, surf clams, whelks, baitfish and algae mixes that spur the shellfish to spawn.

"There is no large-scale commercial oyster hatchery in New Jersey," Jones said.

The oyster success story began with Rutgers, which spent decades developing a disease-resistant oyster. Some are sold to a fishery in Cumberland County that plants them in historic oyster beds in deeper waters in the upper Delaware Bay. Lisa Calvo, aquaculture program coordinator for Rutgers, said the ones Cohen and six other companies are cultivating in the lower bay closer to the ocean taste different.

"Oysters are like wines. They pick up a taste of their surroundings. The nutrients and salt content is different. It's a very special flavor," Calvo said.

Betsy Haskin, who grows Cape Shore Salts and whose father, Hal Haskin, developed the disease-resistant strain for Rutgers, said the key to the flavor is the location.

"The flavor will follow the bay, and the bay is great," Haskin said.

Clark toured the oyster operation Friday as he prepares to present some of the committee's short-term and long-term economic development ideas to Township Council.

One thing the committee hopes to do is remove impediments the businesses may face. Cohen told Clark a Cape May County Mosquito Control tide gate broken by Hurricane Sandy at a creek next to the operation is affecting tidal flow. Clark immediately got on his smartphone to find out that Freeholder Kristine Gabor oversees Mosquito Control.

"We're going to look into that," he told Cohen.

The wild oyster industry in the bay harvested more than 1 million bushels a year from the 1880s until the 1950s but is down to fewer than 90,000 bushels a year. Clark believes aquaculture oysters, grown in tidal flats following the French method, could fully revive the industry and government should help make it happen.

"We're fanning the flames of old businesses and attracting new businesses. It can create jobs and be a tourist attraction," Clark said.

Racks made of rebar keep the oysters off the bay bottom, where predators such as oyster drills live.

The racks keep them underwater at high tide so they can feed, filtering microorganisms from the bay.

The racks keep them above water at low tide so workers can clean them, cull them and harvest them.

Plastic-mesh bags contain the oysters, but they are loose enough for tides and waves to knock them into each other. Sometimes they are taken inside and put in a tumbling machine.

Restaurants want single oysters. Tumbling keeps them from connecting to each other and chips the edges around the oyster. Instead of growing long and narrow, this causes the shell to grow round and deeper. This makes for meatier oysters with more natural juices.

Two of Cape May County’s gourmet industries are considering a partnership to expand their reach to customers across America.

Chris Knorpt, of Erma, sprays down the bags containing the oysters to remove any mud and sediment that can hinder the flow of water through the bags, at the Rutgers University Cape Shore Facility.

Workers sort the oysters by hand, with dead oysters being discarded, market size oysters being transferred to another location, and smaller oysters being put back into bags to continue growing at the Rutgers University Cape Shore Facility.

Algae is grown to be used as food for the larvae oyster seed at the aquaculture facility in Lower Township, just off of the canal.